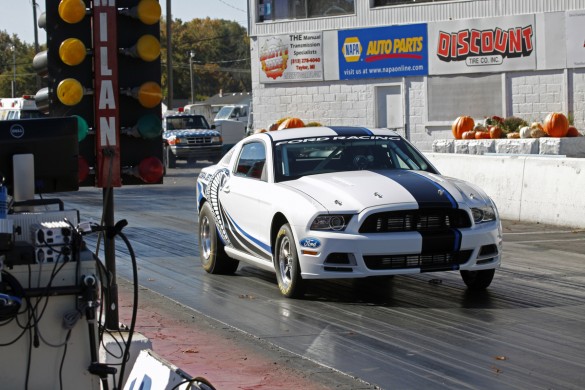 In the process of developing its fuel-saving EcoBoost technology, Ford has learned a thing or two about optimizing a twin-turbo setup for maximum performance, too. It makes sense, then, that Ford would find a way to add a biturbo setup to its factory-built, turn-key drag racer, the limited-production Mustang Cobra Jet.

Relaunched in 2008, the modern Cobra Jets originally got a supercharged 5.4-liter V-8, but this was swapped for the 5.0-liter Coyote V-8 in 2011. Customers can now buy Cobra Jets with or without a supercharger, and it’s likely that the twin-turbo Cobra Jet will join the lineup in the not-too-distant future.

Why turbocharging over supercharging? As Ford explains it, the 2.9-liter supercharger used on the Cobra Jet can rob as much as 100 horsepower from the engine at high boost. Turbos, on the other hand, produce nearly “free” horsepower, but need to be tuned to overcome turbo lag. For the Cobra Jet, Ford is using ball-bearing turbos with low-inertia titanium aluminide turbine wheels for the quickest spool-up.

Ford isn’t releasing performance numbers on the concept Mustang just yet, as it’s still in the developmental stage. Once the setup is optimized for both performance and durability, we’re sure it will be terrorizing dragstrips from coast to coast.