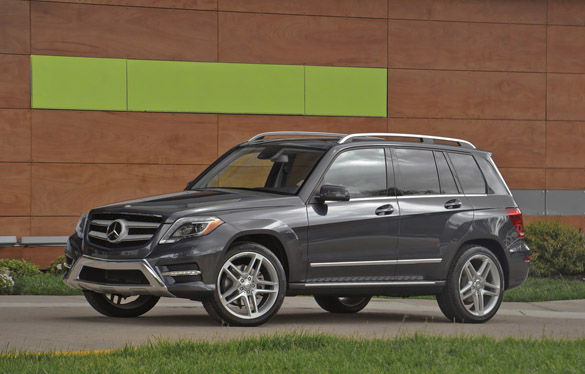 For almost as long as the automobile has been around, Mercedes-Benz has been pioneering the way to establish a certain expectation when it comes to a premium mode of transportation on 4 wheels. Having a strong presence in the crossover and SUV segments, the Benz refreshes their new compact-sized 2013 GLK350, to make a statement much larger than its sheer size thanks to several improvements.

For 2013 the GLK350 gets significant updates including a new direct-injection 3.5-liter V6 engine producing 302 horsepower and 273, revised power steering, an engine start/stop system to conserve fuel and slightly updated styling inside and out.

The Mercedes-Benz GLK class has always been a well-perceived compact luxury SUV since its introduction as a 2010 model 3 years ago. With a multitude of options, trim levels, solid construction and chiseled styling, the baby-Benz luxury crossover SUV sets itself apart from other compact-sized crossovers on the market. With Mercedes-Benz taking an already pleasing formula wrapped in a smallish package and making it even better for the 2013 model year, it makes the case to avoid over-looking what has become a major sales force for the German automaker. 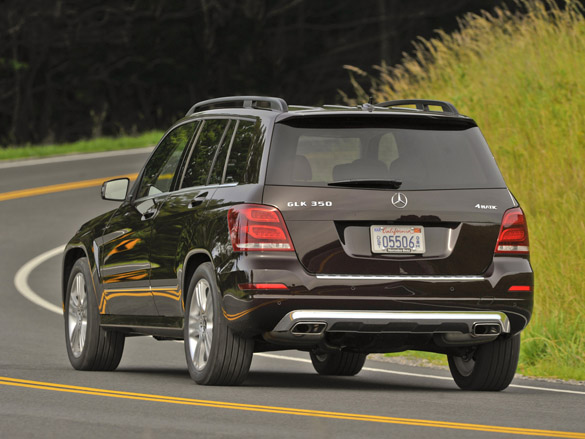 Having many driving characteristics from its C-class sedan sibling, the GLK350 adds an upright demeanor to what many consider to be an excellent driving, but tall, car. During my time in the all-new 2013 GLK350, it kept its Germanic spirit for its adaptive car-like ride and road-going mannerism. However, the new GLK350 does feel heavy on the road, tipping the scale just over 4,000 pounds for my all-wheel-drive 4MATIC test vehicle. Piloting the new 2013 GLK350 is mostly an enjoyable experience aside from really pushing the limits of the heavy compact SUV. Heavy braking and acceleration brings about a surprising amount of body motion. In relative perspective, the size of the new GLK350 really does not constitute is weight. Fortunately, the new re-worked and direct-injected V6 helps move the extra heft around with some added authority. The outgoing GLK350 has only 268 horsepower from the same displacement V6. The new direct-injection V6 adds 34 much-needed horsepower to the equation.

The new GLK350 has a solid and firm body as you tend to take note of when just closing the doors. Craftsmanship is superb leaving no qualms about the new GLK350’s fit and finish. Even the interior leaves no stones unturned when it comes to perception of quality materials and layout. The tall body structure of the GLK350 does not allow air to slip away easily at highway speeds as a low road-hugging compact luxury sedan would. Having said that, it is unfortunate to mention that the GLK350 suffers from a bit of unexpected wind noise on the highway. Although, the drivetrain remains quite, silky smooth and non-intrusive at just about any RPM. 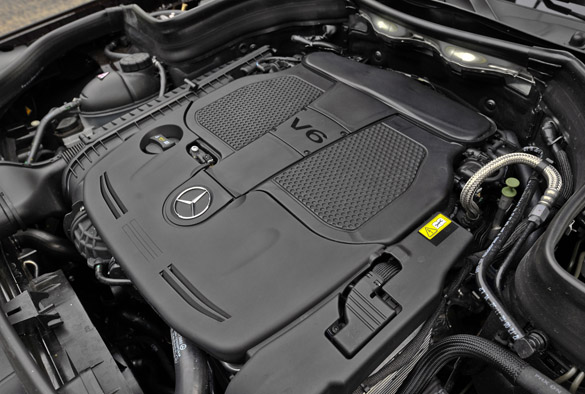 The interior of the new 2013 GLK350 has been reworked adding a next-level of refinement and luxury. Like other Mercedes-Benz vehicles, the new GLK350 gets a familiarized layout of controls and the arrangement of the dashboard. Though, some of the controls require a longer-than-normal familiarization for those not acclimated to the new Benz interior language. Seating positions are excellent but the seats themselves proved to be surprisingly hard for long drives. The center LCD screen is perceived to be on smallish side but makes up for it with its clarity and high resolution. The multifunction COMAND knob is a reasonable way of navigating the central screen for navigation, stereo, Bluetooth streaming, Bluetooth phone connectivity and a short list of infotainment settings. Though, it will require time to fully acquaint yourself on how the COMAND system responds to various inputs. I would say with confidence that BMW’s iDrive system initially requires much less of a learning curve when compared to Benz’s COMAND system. Climate controls are mounted low, but are straight forward enough to leave out a guessing game. 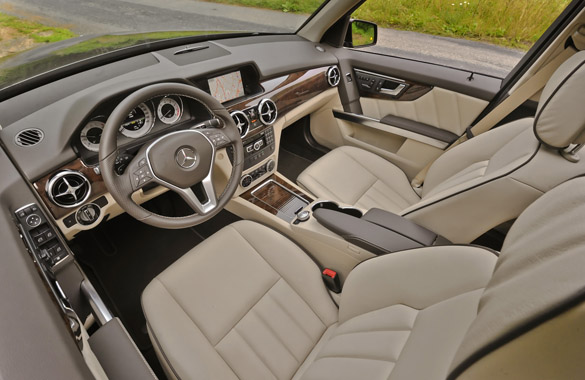 Seating area is about average for this class of a vehicle up front, but the rear seating area becomes rather cramped for adults. The GLK350 also skimps on cargo space. The power liftgate, part of the optional premium package, smoothly opens up to an easily accessible but smallish 54.7 cubic feet (considerably smaller than the competition) with the rear seat-backs folded down. The GLK350 may be best suited for couples without too much ‘baggage’. Headroom is, however, plentiful due to the GLK350’s tall and almost boxy body structure. 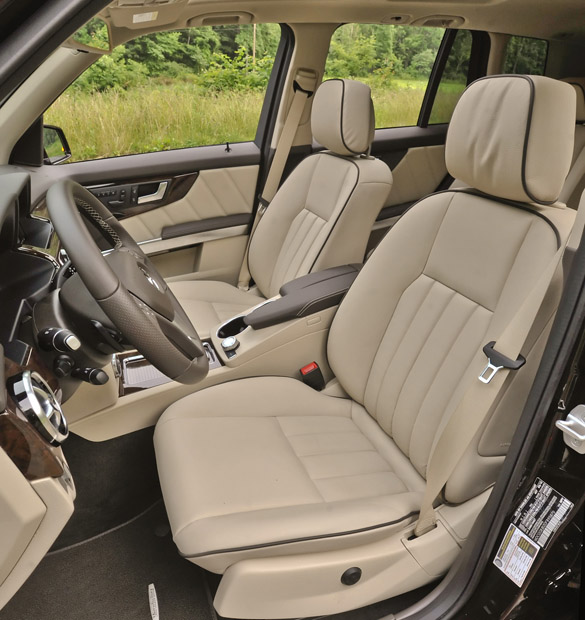 The new 2013 GLK-Class comes standard with a 7-speed automatic transmission and rear-wheel-drive powered by the new 302-horsepower and 273 lb-ft of torque V6 engine. The only other trim level offered with the petrol engine is the 4MATIC, adding a sophisticated all-wheel-drive system. Working in harmony, the GLK350 4MATIC has respectable performance with a 0-60 mph time of 6.4 seconds. It is estimated that the rear-wheel-drive GLK350 will hit 60 mph closer to 6-seconds flat considering it saves some weight by not carrying around the all-wheel-drive mechanics. Fuel economy in the new 2013 GLK350 4MATIC is slightly better than before getting an estimated 19 mpg city and 24 mpg highway.

A GLK250 BlueTEC turbocharged 2.1-liter 4-cylinder with 190 horsepower and a robust 369 lb-ft of torque is the only other trim level offered for the GLK class but will only be available starting spring of 2013. 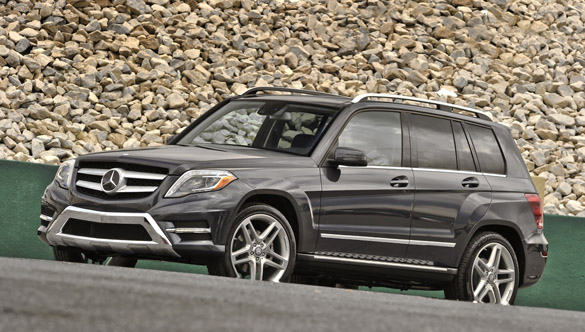 The new 2013 GLK350, in true Mercedes-Benz fashion, gets a large blanket of safety features, some optional and most standard. All GLK350 trim levels get stability control, traction control. Antilock brakes, active front head restraints, front side airbags, curtain airbags, front pelvic airbags and a driver knee airbag. The driver drowsiness monitor is also standard along with the new-for 2013 mbrace 2 emergency communications system, which provides automatic crash notification, roadside assistance connectivity and an owner-alert system that sends a notification when a pre-set boundary or speed is exceeded by another driver. The latter of the systems proves to be beneficial when say a teen or valet gets behind the wheel. 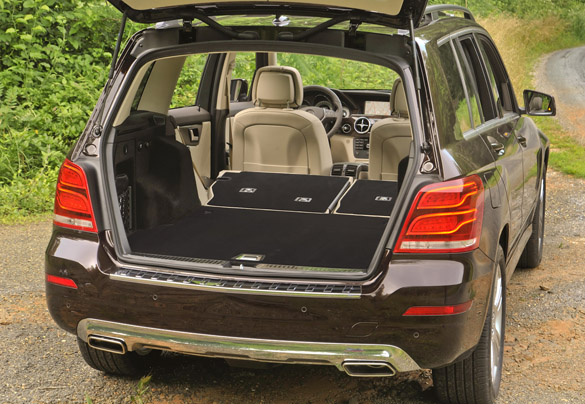 The new 2013 Mercedes-Benz GLK350 starts at a respectable $37,090. Moving up to the GLK350 4MATIC trim adds another $2,000. Tacking on a full list of options easily pushes the price to over $54,000, possibly placing the little-SUV-Benz in another dimension. Still, if unsurpassed build quality and the prided Mercedes-Benz name-plate with all of the prestige that comes with it is what you seek, then you shall find exactly what you are looking for in the new GLK350.