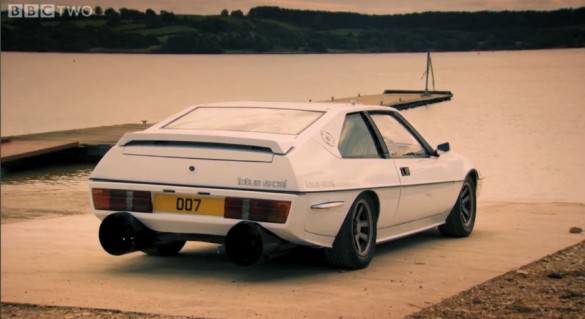 To celebrate 50 years of James Bond, Top Gear has produced a special episode (temporarily available for viewing here) that honors the various Bond rides over the years. The hour-long episode also features interviews with James Bonds Daniel Craig and Roger Moore, and is topped off by a test drive of a Top Gear-built Lotus submarine.

No, it’s not the same Lotus Esprit-turned-submersible that starred in The Spy Who Loved Me; instead, the Top Gear crew converted a Lotus Excel, oddly fitted with wheels from an early-1980s Toyota Supra. Those massive pipes that dominate the rear aren’t exhausts; instead, they’re electric-powered thrusters. The odd wings protruding from the rear quarter panels are dive planes, used along with the thrusters to control the car’s depth.

For a Top Gear creation, it works surprisingly well, though we’d still want to be dressed in a wet suit and fitted with an emergency air supply, should the car spring more than the few obvious leaks. We don’t see this hitting the market as a bolt-on kit for your car any time soon, but we’ll admit it looks like a blast to drive. Or sail, depending upon your perspective.