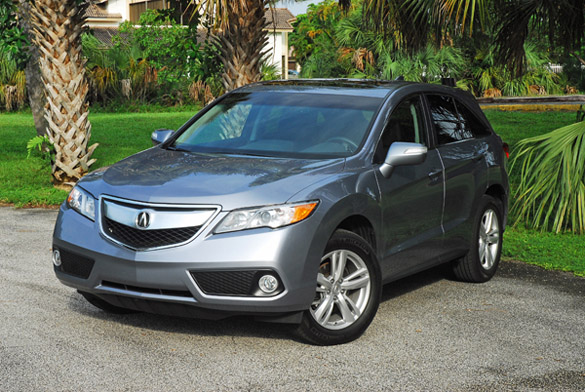 The market for personal sized SUVs has been increasing in popularity in the last few years.  Based on current economic conditions and changing consumer preferences, small is becoming big in the eyes of today’s consumers.  With the all-new 2013 RDX, Acura once again offers the right product at the right time.

The Acura RDX burst on to the SUV scene in 2007.  Upon its debut, the RDX 5-passenger crossover SUV generated excellent reviews and strong praise.  Never content with ‘well enough’, Acura engineers set out to develop a whole new RDX for 2013.  The latest RDX significantly ups the ante with its all new looks, a new engine, a new transmission and even a new all-wheel drive system.  The RDX exterior incorporates a sleek body, and chassis updates abound in the form of a longer wheelbase with increased track, all-new Amplitude Reactive Dampers and a new motion adaptive electronic power steering system.  Copious use of technology has always been key with Acura vehicles, and the 2013 RDX provides even more driver relevant technology features than before.  Smart luxury has long been a tenet for Acura and the new RDX delivers this in spades!

Inside the 2013 RDX, occupants will appreciate a new interior design along with the luxurious materials.  New sweeping shapes, matte surface trim and generous use of leather combine to give the RDX interior an upscale look and luxury feel that Acura customers have come to expect.  When driving, the rich interior materials, abundant use of noise insulation materials and numerous high-tech appointments, such as Active Noise Control, larger cargo volume and a new power rear tailgate make the RDX interior even more accommodating for owners who are on the go. 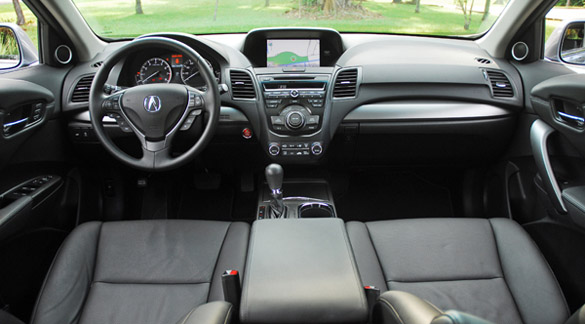 You’ll go with power and style in the all-new 2013 RDX because the new model makes use of an all-new powertrain that not only delivers significantly more horsepower, but also delivers improved fuel economy.  Replacing the previous turbocharged 2.3 liter inline four-cylinder engine is a new 3.5 liter V6 engine that marks the first use of variable cylinder management (VCM) for an Acura vehicle.  Producing 273 hp at 6,200 rpm and 251 lb.ft. of torque at 5,000 rpm, the new V6 makes use of the latest version of VCM that allows for three levels of cylinder deactivation.  Also new is the sequential sportshift six-speed automatic transmission paired with a new multi-clutch torque converter.  You can change gears using the floor-mounted stick shifter or the steering-wheel mounted paddle shifters.  In addition to adding another forward gear, the new six-speed is also smaller and lighter than the previous five-speed automatic.  The result is improved performance and better fuel economy. 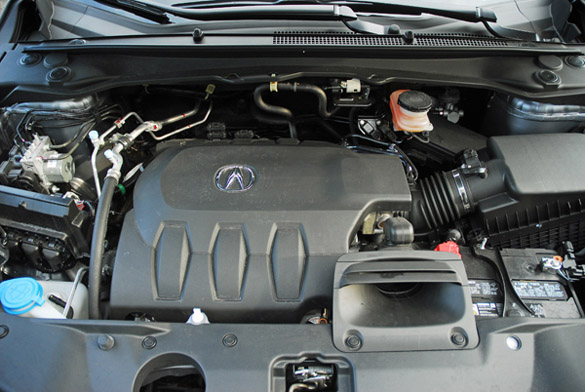 The new V6 engine and six-speed transmission team to deliver an EPA estimated city/highway/combined 20/28/23 mpg (FWD), and 19/27/22 mpg (AWD).  In the case of the AWD model, this represents a 5% mpg increase in highway fuel economy and as expected, the all-new RDX complies with EPA TIER 2-BIN 5 and CARB LEV II ULEV emissions standards.  Now running cleaner and leaning.

The 2013 RDX also features a new AWD system that is smaller and lighter than the previous drivetrain setup.  Known as AWD with Intelligent Control, the new system also is more efficient than before, which along with the reduced weight, helps achieve the AWD RDX’s increased fuel economy. 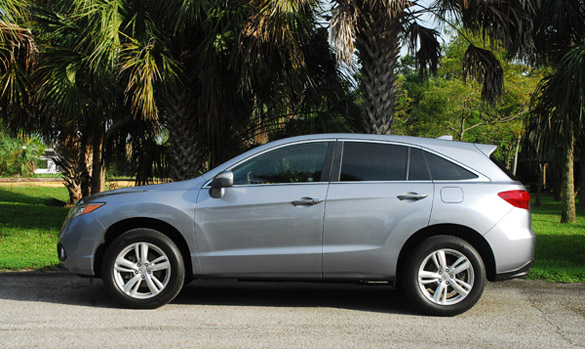 The all-new RDX is more refined and fluid compared to last year’s model and better matches the design preference of the entry-level luxury SUV consumer.  A smoother front fascia, wider wheel arch lips and flatter side panels not only deliver a more upscale look, but combine to make the 2013 RDX more aerodynamically efficient than before.  In particular, much time was spent designing new underbody panels that not only provide significantly smooth airflow, but also generate less wind noise to a quieter cabin.

At the front, a new grille blends together with much long, more graceful headlights.  Along the sides, the new RDX makes use of smoother door panels that incorporate a crisp body line that runs through the door handles.  At the rear, the RDX roofline is far more tapered than before and the rear fascia has a much smoother look than before.  For 2013, a power actuated rear tailgate (as part of the Tech package) is a first for the RDX.  For strength, further increased use of high-strength steel (56% versus 47% last year), not only provides increased strength at a lower weight, but generates a stiffer body for improved performance and reduced NVH. 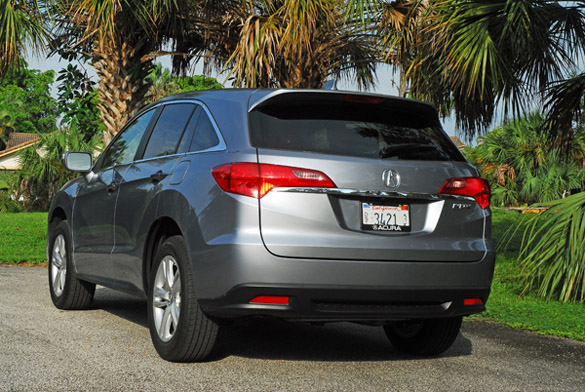 Like its predecessor, the 2013 RDX rides on a 4-wheel independent suspension with MacPherson struts, gas-charged twin-tube gas shocks and a 22mm solid stabilizer bar up front, and a multi-link setup in the rear featuring gas-charged twin-tube gas shocks, coil springs and a 19mm solid stabilizer bar.  Combining this excellent suspension geometry with a longer wheelbase, increased track width and a lower center of gravity, help give the new RDX improved handling with a more subtle ride, just like you are driving a premium performance sedan.  New chassis technology includes the all-new Amplitude Reactive Dampers and anew motion adaptive electronic power steering system that replaces hydraulic steering that exhibits more feel for the road with quick reaction to your inputs.  Standard traction control and vehicle stability assist control help you stay on your chosen path during spirited driving times.

Larger front and rear brake rotors help you safely slowdown from speed.  Up front are 12.3 in. vented discs clamped with single-piston calipers and 12 in. solid discs clamped with single-piston calipers in the rear.  Not only do the brakes provide better performance, but they also incorporate improvements to reduce brake drag-which reduces rolling resistance and improved fuel economy.  The new brakes come standard with ABS, EBD and BA. 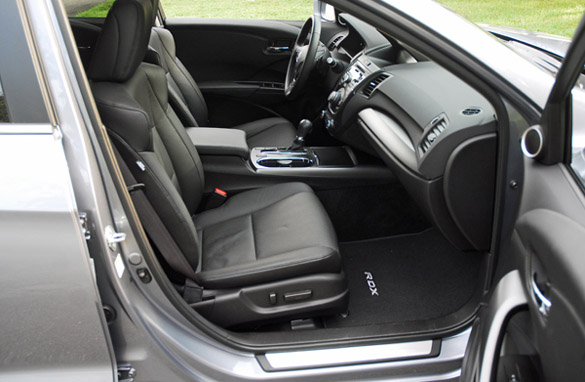 For 2013, the RDX has a whole new interior with more of what consumers want.  Topping the list is more legroom and shoulder room for both front and rear occupants.  More cargo room is now available with a significantly wider rear hatch opening.  Despite the improved interior roominess, the exterior footprint of the RDX is comparable to the previous model.  In addition, more insulation and a new Active Noise Control system generate a quieter cabin, while a new audio system delivers a more enjoyable listening experience.

Throughout the cabin, the new ‘dual personal’ cockpit design makes use of more sweeping shapes.  And of course, the 2013 delivers even more driver relevant technology including a new hard disc drive (HDD) based navigation system paired with a new W-VGA color screen set deeply into the center instrument panel for excellent visibility.  This new RDX interior has an even more upscale look and a luxury feel that Acura customers have come to expect.

Just as before, RDX seats five but caters to you and your front passenger first and foremost.  It leather seating surfaces and ergonomically designed seat contours are designed to provide ample support during spirited drives or long road trips.  The power actuated driver seat is 8-way adjustable with adjustable lumbar support for a custom fit.  For you, a leather-wrapped steering wheel, LED backlit rallye gauges with progressive illumination and a Multi-Information Display (MID) allows access to multiple electronic functions.   Among the advanced electronic technologies is a new 360-watt audio system with seven speakers, a CD player, AM-FM radio, XM radio with note function, Bluetooth audio, USB port, and AUX jack connectivity and speed volume control. 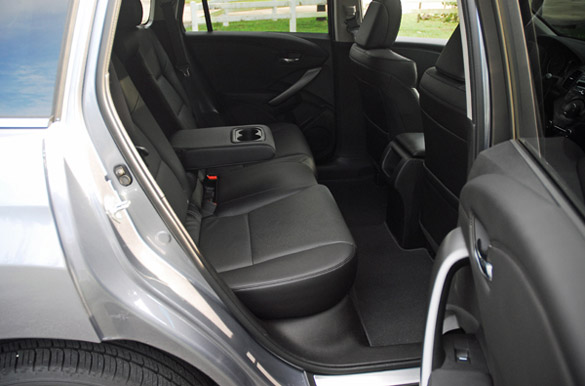 Even more so than before, transformability of a vehicle is a top concern with buyers-so to be able to quickly and easily transform the RDX from a people hauler to a cargo hauler was paramount.  Thus, before offering exemplary comfort, interior roominess and cargo carrying were high priorities for RDX designers.  With a new ‘one touch’ activation of the 60/40 split-folding rear seatbacks, the rear cargo area (with seatbacks folded down) offers 76.9 cu.ft. of storage-16.3 cu.ft. more than before.  Interior storage compartments include a large center console between the front seats, a pull-down rear center armrest with dual cupholders, storage pockets and cubby spaces throughout the new RDX.  The 2013 RDX has a total passenger volume of 103.5 cu.ft. versus 101.4 cu.ft. from last year’s model, and is the largest volume in its class! 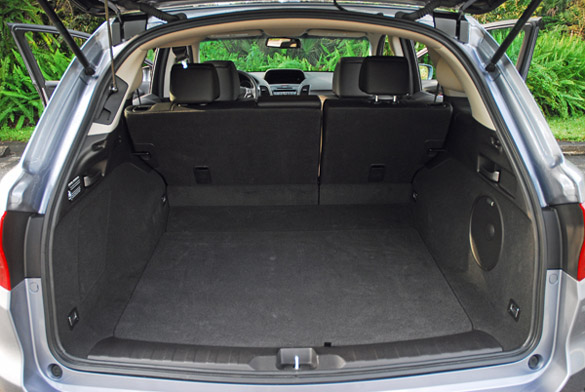 The 2013 RDX is so well equipped in standard form that only one trim package is optional.  With the Technology Package, a host of driver relevant features are added including HID headlamps, foglamps, AcuraLink Real-Time Traffic Rerouting and AcuraLink RealTime Weather with radar image maps.  For 20 13, the navigation system is even more advanced and is operated by anew hard disk drive system with 60 gigabytes of storage memory.  The HDD system operates with far greater speed than the previous CD-based system, and it has 15 gigabytes of dedicated space allocated for music storage.  The navigation system also makes use of a new 8 in. W-VGA color screen with four times better resolution and it also features a new rear view camera system.  Audiophiles will rejoice with the new Acura/ELS surround 10-speaker, 410-watt audio system with DVD-audio, CD, DTS, AM-FM radio, XM radio, Bluetooth audio and a 3,500 song hard drive media storage system.  Also part of the Tech package is a GPS-linked solar-sensing, dual-zone automatic climate control system along with a power operated rear hatch.  In total, these new technologies put the new RDX at the cutting edge of the entry premium SUV segment.