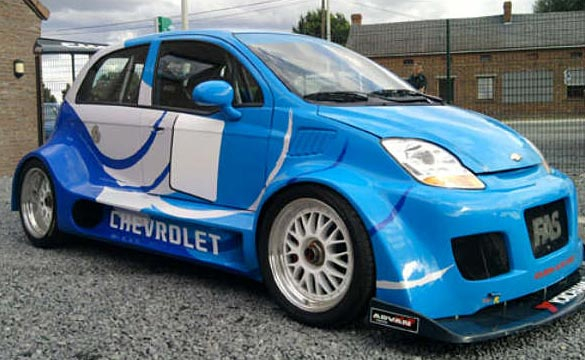 Stuffing a bigger engine into a smaller car has been the recipe for increased performance since automobiles first appeared on the planet. Over the years we’ve seen some fairly crazy swaps, like a Taurus SHO V-6 stuffed into a Ford Fiesta, a small-block Chevy shoehorned into a Porsche 911 and even a 27-liter Spitfire fighter V-12 stuffed into a vintage Rolls-Royce frame.

All pale in comparison, however, to the sheer madness of a creation found on Corvette Blogger (via Motor Authority). The evil geniuses at Fourdin Auto Sport figured out a way to stuff the 7.0-liter, 550-horsepower V-8 from a donor Corvette Z06 into a Chevy Spark minicar. Judging from the engine’s orientation, we’re guessing the tiny terror is rear-drive, and it relies heavily on donor parts from the Z06 to strengthen the subframe and enhance braking and steering.

The uber-Spark can sprint from 0-100 km/h (62 mph) in 3.7 seconds, on its way to a top speed of 260 km/h (161 mph), so we’re guessing the aero body kit and massive real wing serve more than a cosmetic purpose. Even with the wide 18-inch wheels used for the build, the car still has a narrow track and a narrow wheelbase, meaning that it won’t be very forgiving of driver errors.

The car was briefly for sale on eBay’s German site, at a price of 43,000 euros ($55,225), but lasted just a day before being taken down. We hope the car found a new home, because madness like this should never be locked away.