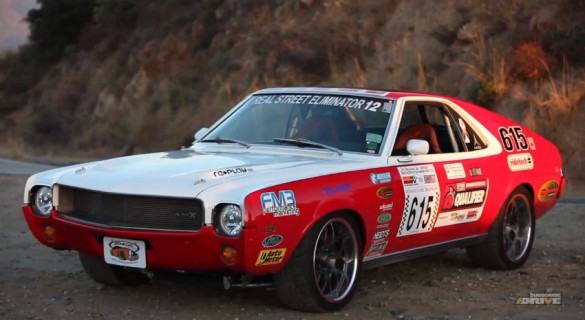 If we asked you to name all the popular muscle cars of the late 1960s, we’re sure you’d hit on all the obvious choices. More obscure, however, are cars from now-defunct manufacturers, like American Motors.

Its Javelin was the automaker’s answer to the Mustang and Camaro, and atop the AMC performance pyramid sat the AMC AMX, which was a Javelin that went all-in, perfoamnce-wise. If you think of it as the AMC equivalent of a Camaro Z/28 or a Mustang Mach One, you wouldn’t be far off the mark.

To prove that the AMX was a sports car (despite its live rear axle), AMC only gave it two seats. While the car never sold in the same volume as its cross-town rivals, the Javelin and the AMX still have something of a cult following, and die-hard AMC fans probably aren’t going to like the build sheet for Jimi Day’s AMXcess.

While the glass and sheet metal are all original, the rest of the car has been built from the ground up to be fast, reliable and easy to find parts for. That’s an LS3 small-block Chevy engine under the hood, mated to an aftermarket transmission and sending power to the rear wheels through a nine-inch Ford rear end.

Underneath, the car rides on RideTech triple-adjustable dampers, while six-piston Wilwood calipers handle the stopping duties. We know Jimi Day, so we can tell you with absolute certainty that he drives this car hard. His “ten-tenths,” would give casual passengers heart failure, which is just another testament as to how well this car is put together.

We’re big fans of pro-touring, since we grew up with muscle cars but prefer lapping at a road course to simply running the quarter mile. With the possible exception of Mary Pozzi’s Camaro (to be featured in an upcoming release of Gran Turismo), we can’t think of another pro-touring car that we’d rather drive than Jimi Day’s AMXcess.