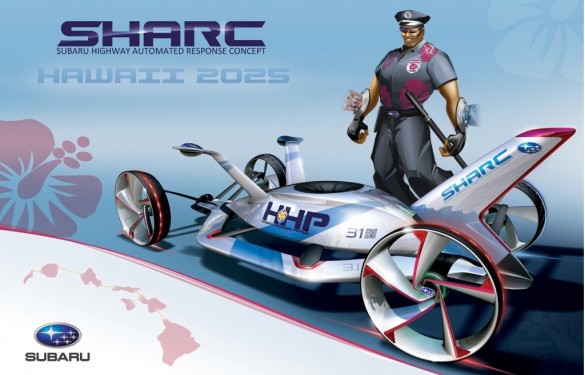 Every year, the Los Angeles Auto Show hosts a design challenge to pen some sort of “ultimate” car. For 2012, the focus was on the “highway patrol car of 2025,” and those submitting entries read like a “who’s-who” of modern automotive design. BMW’s Designworks USA sketched a concept, as did Honda’s R&D Studios in Tokyo and Los Angeles, General Motors’ Advanced Design California, Mercedes-Benz’s Advanced Design Center California and Subaru’s Global Design studio.

In the end, there can be only one winner, chosen because it best represents the spirit and goals of the assignment. In the case of Subaru’s entry, the Subaru Highway Automated Response Concept (SHARC), that design relies on renewable (but unnamed) energy for carbon-neutrality, and boasts fully autonomous operation to reduce police department staffing levels.

While the SHARC may look a bit flimsy for patrol work, it has a trick up its (theoretical) sleeve that you never saw coming: its wheels rotate 90-degrees downward to form ducted fans, giving the SHARC the ability to fly. That gives the highway patrol car of the future the capability of traversing both land (with or without roads) and water, essentially reducing your odds of running from a speeding ticket to zero.

We’re not sure how the general public will take to robotic flying police cars, but those of us who occasionally drive at super-legal speeds already think it’s a bad idea.