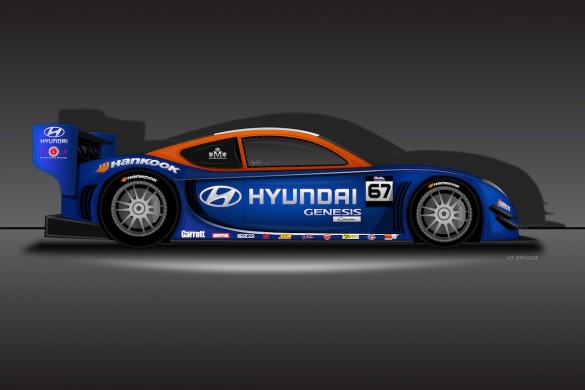 For years, Rhys Millen was the face of Hyundai’s motorsports activities in North America, campaigning Hyundai’s wares in Formula Drift, Global Rallycross and even at the world-renown Pikes Peak Hill Climb. Last September, that relationship came to a sudden and unexpected end, with Hyundai announcing a review of how its motorsports budget was spent.

Ironically, the announcement came just months after Rhys Millen set a new record on Pikes Peak behind the wheel of a Hyundai Genesis Coupe. While Millen tried to shrug it off as part of racing, it was clear that the announcement came as a surprise to him as well. Cutting loose an unproductive driver is one thing, but cutting loose a driver active in three series, who just set a new world record, doesn’t seem like the wisest choice.

On Monday, Hyundai announced that it’s reuniting with Rhys Millen Racing for a two-car attack on Pikes Peak in 2013. In addition to running a (heavily) modified Hyundai Genesis Coupe, Rhys Millen Racing will also campaign a purpose-built race car, built around Hyundai’s Lambda V-6 engine. While production components like the block, cylinder heads and bearings will be used, the heavily-modified engine will be tuned to produce “over” 900 horsepower and 800 pound-feet of torque. Expect to see a lightweight body that more or less resembles a Hyundai Genesis Coupe, too.

Millen will drive the Unlimited Class racer, while a yet-to-be-named driver will campaign the Genesis Coupe in the Time Attack 2WD Class. The goal is a new record for Hyundai in each of the two classes, as well as gathering information on the durability of Hyundai’s drivetrain components under extreme conditions.

If that’s the good news, here’s the bad: the new partnership doesn’t appear to extend to Formula Drift or the Global Rallycross Championship. Still, as Rhys Millen will surely tell you, any sponsorship is better than no sponsorship.