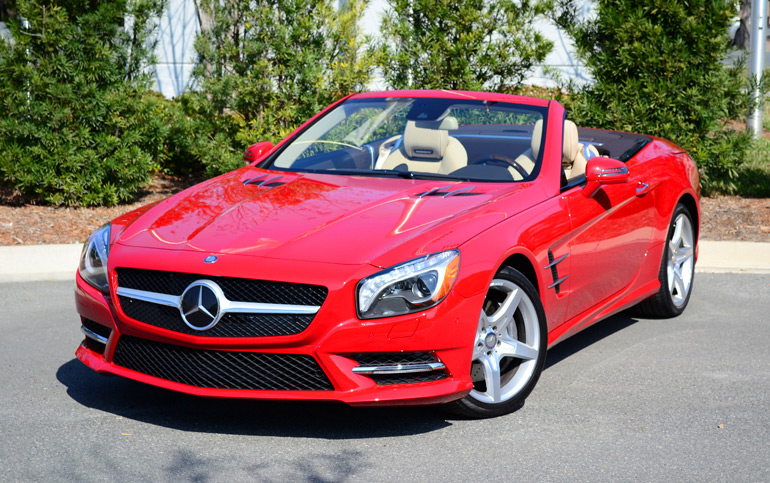 With Mercedes-Benz having a lineage that has stood the test of time for almost as long as the Automotive industry has been around, it is refreshing to testify to their latest SL roadster still pushing forward the luxury envelope without leaving anything to be desired.

The all-new 2013 Mercedes-Benz SL550 exudes premium luxury appointments for two passengers with the enjoyment of a 429 horsepower and 516 ft-lbs. of torque twin-turbocharged direct-injected V8 engine and a convertible hard-top to boot. Not only does the new Benz SL550 accel over previous generations, but the new 5th generation reaches a new level of refinement and appeal to enthusiasts. 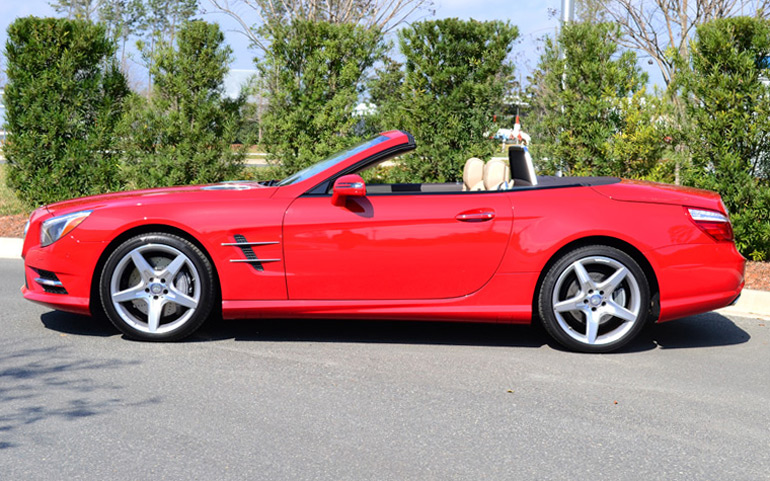 The new 2013 Mercedes-Benz SL is light on its feet where it can channel all of its brute force to the rear wheels through a smooth-shifting 7-speed automatic transmission thrusting the newly sculpted body forward with authority. The new body panel structure is new composed of 90% aluminum and 10% magnesium allowing the SL to shed some unwanted weight over the previous generation, as much as 200 pounds, while stiffening the vehicle overall by 20%.

Proving to literally have a face-lift resembling the new Benz SLS AMG, the new Benz SL takes claim to its wider track, taller front fascia and lengthened body over the outgoing model. Even with the larger dimensions the new Benz SL remains to keep its curb weight right at 3,935 pounds. Shedding the extra weight allows the 4.7-liter direct-injected twin-turbocharged V8 prove its agility combined with a capable hard-top convertible chassis reaching 60 mph in just 4.5 seconds. 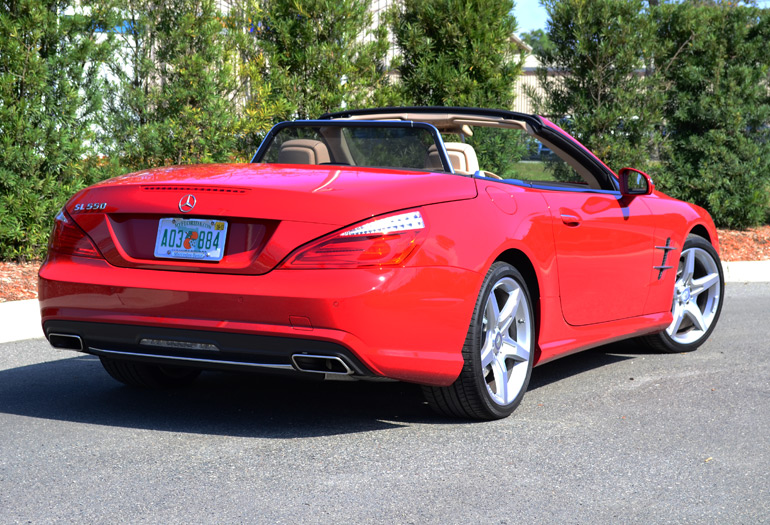 In true Mercedes-Benz fashion, the new SL exudes luxury even with the quiet and quickly folding hard top up or down. Pushing enduring luxury amenities even further in Mercedes’ prided SL roadster, the roof is a never-ending joy by means of Magic Sky Control, basically an electronically controlled tinting of the glass panel delightfully encased in the roof top. When up, the roof can express a subdued sense of having a sunroof with a tinted glass shade that dims or lightens at the push of a button. It is simply an ingenious touch.

With the fun extending far beyond leaving the hard-top roof up, the new Mercedes-Benz SL fully retracts the top in just 21 seconds. Having a cabin as quite as any other luxury sports coupe when the top is up, the SL merely extends its luxurious cabin delight equally with the top or down. 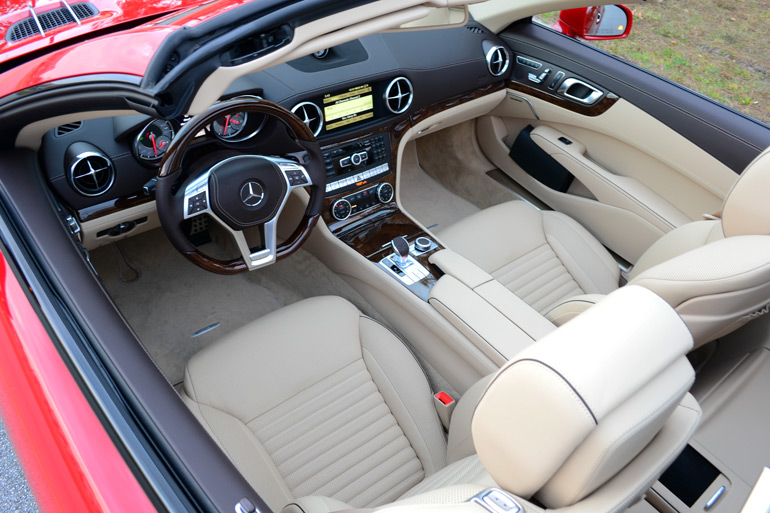 Part of keeping the driver and passenger encased in an unforgettable luxury-laced environment, the new Mercedes-Benz SL features AIRSCARF, which is a venting system that emits heat under the seat headrests aimed at the back of your neck. This is a highly sought-after option for the SL not only in cooler regions but for those starry nights when the temperature may have been considered too cool to let the top down. In a way, combined with the active bolstered, heated, massaging, ventilated and exceptionally perforated seats, the SL can be a yearlong fun machine.

Speaking of fun, the 4.7-liter forced-fed V8 engine implements power beyond numbers on paper. Although the horsepower figure of 429 is short of many sports cars, the new Benz SL can hang with some of the best through efficient power management via the well-adapted 7-speed automatic transmission and a curb weight kept to a minim for a large performance luxury hardtop convertible roadster. Selectable Eco, Sport and manual transmission (through steering wheel-mounted paddles) modes allow the driver to dial in an adapted shift program while the Active Body Control (ABC) suspension system can be set to a desired Comfort, Normal or Sport mode. 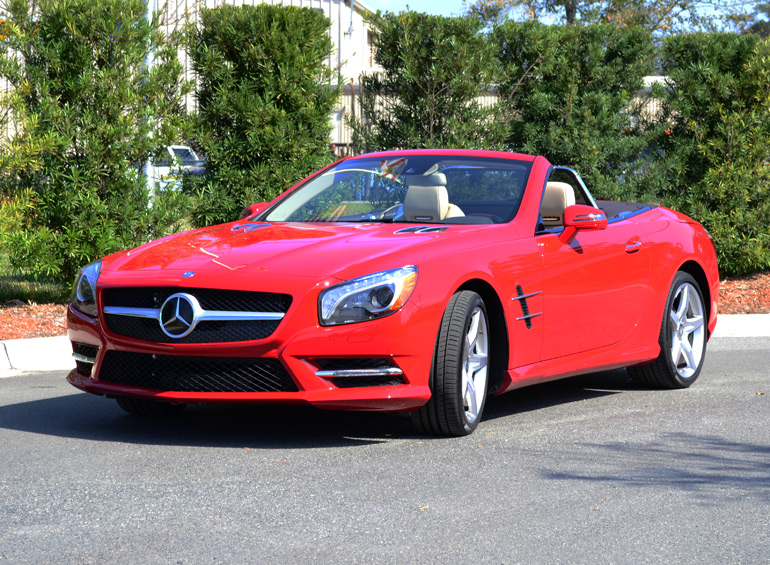 Driving dynamics of the new SL can sometimes come off as a bit artificial, mainly due to absence of much body roll when putting the SL into a sharp turn. Moreover, the SL seems to show a sign of its mass when really pushed to the limit, almost as if it wants to understeer just because the Active Body Control suspension kept the body as flat as an ironing board. Over all, the SL is well suited to be driven hard but begs to mislead the driver on quickly finding its limits, somewhat in part to the ample surging horsepower and low rpm-pumping torque. It is highly suggestive to leave the traction and stability control in place or your insurance company may not be happy about forking over the bill on your mishap. Though, it is likely you will walk away from incidents should they occur due to Mercedes-Benz’s efforts of a massive security blanket. Of course an abundance of active safety features are available to keep you from entering into the forbidden territory such as Distronic Plus with Pre-Safe Brake, Active Lane Keeping Assist, Active Blind Spot Assist and an Attention Assist system.

The latest Active Body Control in the 2013 Mercedes-Benz SL is remarkable in its efforts to keep the vehicle balanced, almost level, through hard cornering. Additionally, the Active Body Control raises and lowers the suspension based on drive speeds and mode setting. As the vehicle nears highway speeds, the suspension adapts by lowering the vehicle for added stability. Set in full sport modes, the quick speed-adapted steering rack is slightly modified with added tension, the suspension limits body motion and the transmission holds lower gears longer but not to the point that it upsets an expected every-day smooth shift-pattern. 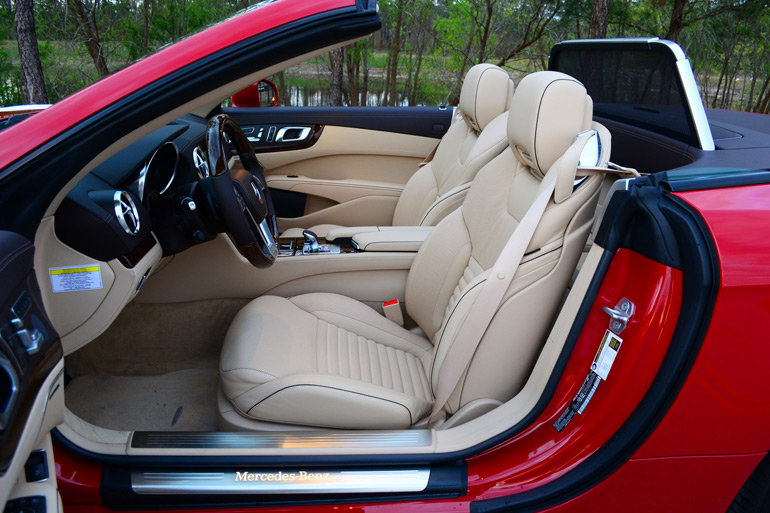 When inside of the new 2013 SL550, the abundance of luxury features and amenities can sometimes seem a bit overwhelming. Though, Mercedes-Benz pulls off making many controls and access of class-leading features somewhat simplistic. I would not say the new SL is an easy machine to completely understand just by jumping in and driving into the sunset, but it fits like a glove after going on a 15-minute learning curve journey. The latest Mercedes-Benz COMMAND SYSTEM with navigation proves to be very responsive but does require taking time out for adapting yourself to an eccentric setup when put up against the likings of BMW’s iDrive or Audi’s Multimedia Interface.

Found on my SL test vehicle was just about every option offered through the long laundry list of advanced technology and a few first-time amenities such as the AIRSCARF system. The Harmon Kardon audio system is truly exceptional, one of the best I have heard in an OEM flavor – not to mention the clarity of its deep bass emitting through my chest and crisp highs noticeably captured with the top up or down. 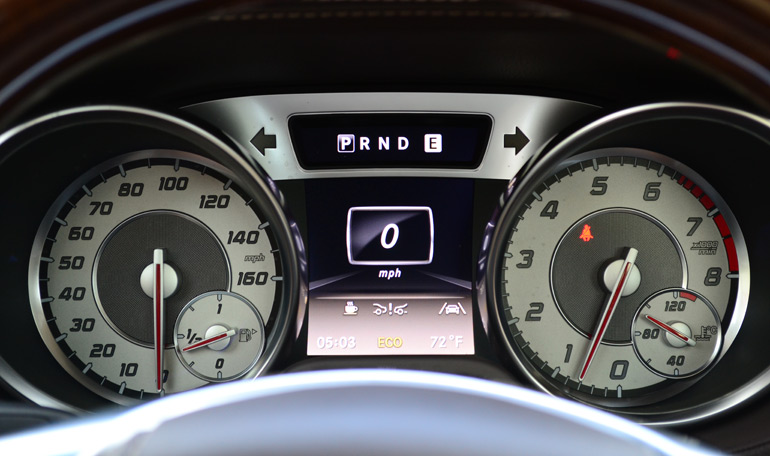 From a lax daily commuter to an adventurous enthusiast, Mercedes-Benz engineers didn’t spare their efforts to give the new SL550 true customization for just about any type of driver. Basking in the lap of luxury with a solitary quiet cabin is just as enjoyable as letting the hardtop down and letting your hair blow in the wind. You can do it all within the confides of an exceptional performance luxury hardtop convertible roadster laced in a plethora of luxury amenities to keep everyone entertained, comfortable and thrilled.

Of course this delighting enjoyment and satisfaction of a new 2013 Mercedes-Benz SL550 comes at a vast price, about $125,000 when fully loaded. Starting price for the new 2013 SL550 is $105,500, a price point that is justified only after repeatedly treating yourself to world-class roadster with performance, good looks and true luxury appeal.