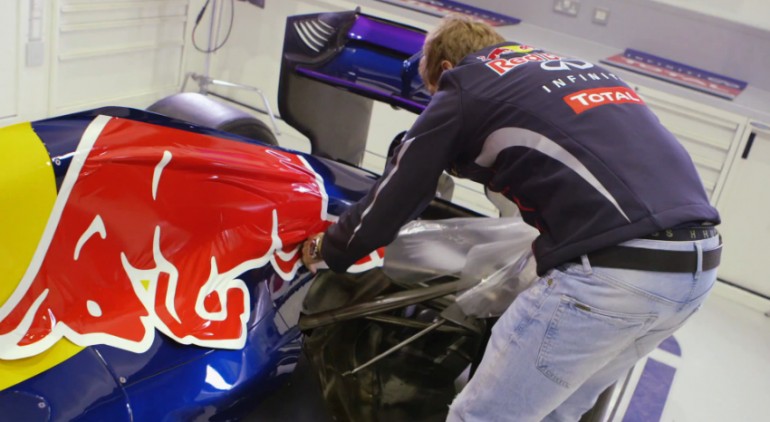 Sebastian Vettel shows how NOT to apply sponsor decals

There’s no doubt that Infiniti Red Bull Drivers Sebastian Vettel (a three-time World Champion) and Mark Webber (nine wins and 34 podiums) know a thing or two about driving a Formula One car at the limit. There’s more to running a team than just turning hot laps, and when Seb and Mark are tasked with stickering up a blank Red Bull RB9 chassis, how well do you think they fare?

First, if you’ve ever put sponsor decals on a production car, you know how difficult a task this is. It doesn’t get any easier when every surface of the car you’re pasting up is designed to generate an aerodynamic advantage, and it’s pretty clear that neither Infiniti Red Bull driver will be going into the vehicle graphics business upon their retirement from Formula One.

In fact, they may know the car’s mechanicals, but it’s painfully obvious they aren’t paying much attention to the overall livery. We’re not surprised, since it’s their job to get the sponsors on the podium, not to get sponsor logos in the correct position on the RB9. In fairness to Seb and Mark, we’d bet the team’s graphics guy is a whole lot slower around the track than they are, too.