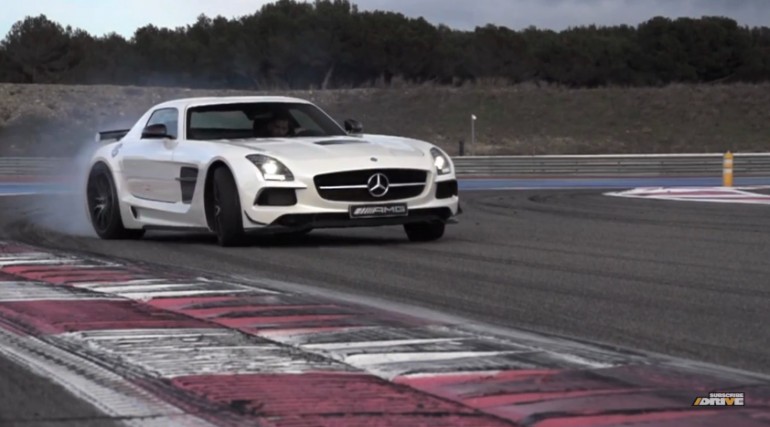 If you asked us to categorize the new SLS AMG Black Series, we’d have a hard time fitting the car into a single segment. Its on-track behavior clearly makes it a sports car, yet its long wheelbase and refined mannerisms (even in Black Series trim) don’t exclude it from the Grand Touring category. With the electro-nannies turned off, however, it shreds tires and wags its tail with the best of the muscle car class.

To build the SLS AMG Black Series, Mercedes-Benz (and AMG) begin with an already-fast SLS AMG GT. The car gets a bump in output to 631 horsepower (impressive from a naturally-aspirated 6.2-liter V-8), a wider track, a stiffer suspension, stickier tires and aerodynamics specifically designed to reduce lift at speed. Next comes the crash diet, which shaves 70 kilograms (154 pounds) off the standard SLS AMG, via the use of things like a titanium exhaust, a carbon fiber driveshaft, a lithium-ion battery and a carbon fiber hood.

Chris Harris is clearly smitten with the 230,000 pound (about $350,000) hoon-mobile, calling it “flipping excellent” on the track. And therein lies the problem: since only 350 will be built, with each selling for an astronomical price, few will ever turn a wheel in anger on the world’s premier tracks. In fact, our guess is that the vast majority will be purchased for investment purposes, secreted away in a climate-controlled garage to avoid depreciation.

Based on Harris’ antics behind the wheel, there’s something criminal about that. What’s the point in engineering and building a car that’s so rewarding to drive, when the vast majority of owners will never drive the car as its engineers intended?