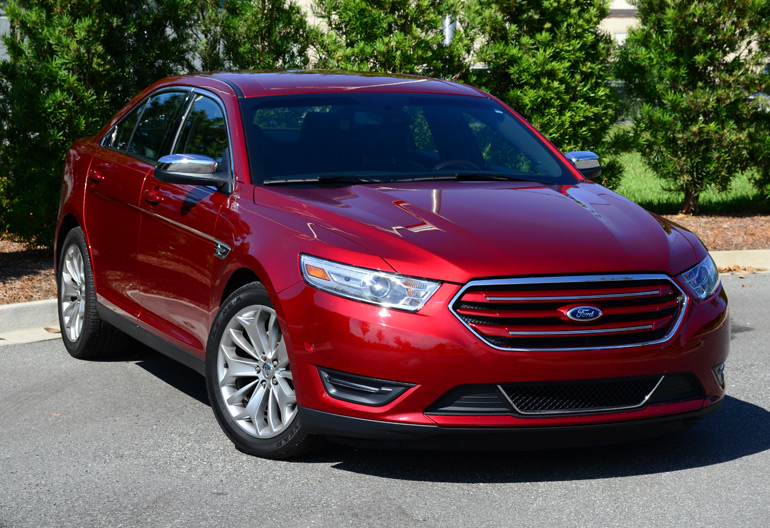 Those of us fortunate enough to get to drive all types of new cars hot off of the assembly line almost on a weekly basis have taken note to the recent big car small engine formula , which has turned out to work well for vehicles like the all-new 2013 Ford Taurus 2.0-liter Limited EcoBoost. The new Taurus is the latest vehicle from Ford to receive their highly praised 2.0-liter EcoBoost turbocharged 4-cylinder engine touting good fuel economy and decent power wrapped up in a package eager to compete with several other midsized sedans with the same engine recipe.

Things have immensely changed over the years in reference to economy standards, and Ford has been at the forefront of the spectrum using their arsenal of economical EcoBoost engines touting a turbocharger to give their small displacement 4-cylinder engines V6 power with the fuel economy expected from a compact 4-cylinder vehicle. The new 2013 Ford Taurus, for a vehicle of its hefty size, attempts to shatter the diminishing return economic factor by providing enough power to tote the Taurus without too much fuss and still get an EPA estimated 32 mpg on the highway. 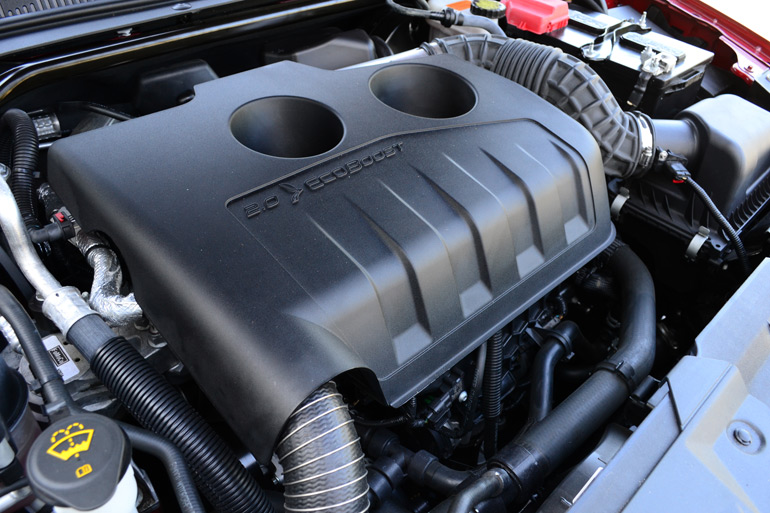 All-new for 2013 is the Ford Taurus available with the same 2.0-liter turbocharged engine that can be had in several new Ford vehicles including the new Explorer, Fusion, Flex and the pocket-rocket Focus ST. In the Taurus, the 2.0-liter direct-injection force-fed 4-cylinder produces 240 horsepower at 5,500 rpm and 270 lb-ft of torque available starting at 3,000 rpm. That is slightly more torque over the 254 lb-ft in the standard 3.5-liter V6 engine. The new turbo 4 is available as an option in all new 2013 Taurus trim levels except the top-ranging SHO. 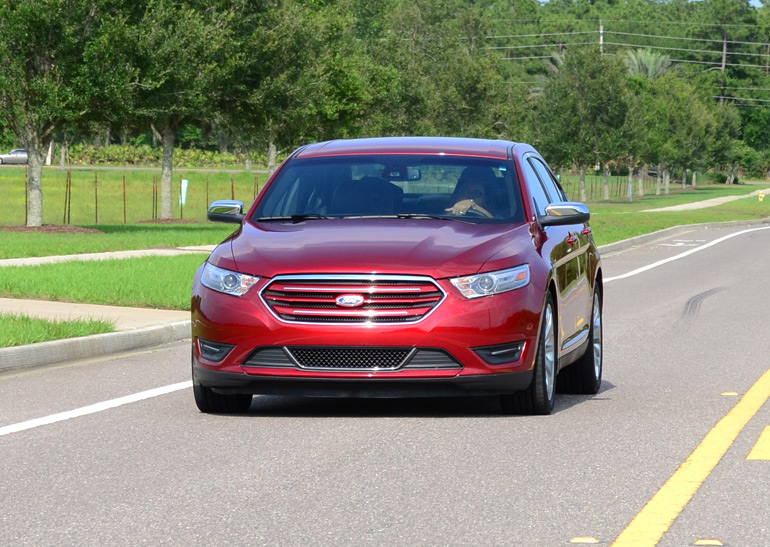 The new 2013 Taurus 2.0L Limited EcoBoost has a nice grouping of amenities and a good powertrain directing power to a standard 6-speed automatic transmission to feed the front wheels. Of course with the mass of the new Taurus, with over 102 cubic feet of passenger volume and a curb weight of 3,990 pounds, you would expect a 4-cylinder to beg for mercy during every hard acceleration. Well, I am happy to report that the new Taurus 2.0L EcoBoost is just about on a level power-playing field with other naturally aspirated V6-powered midsized sedans. 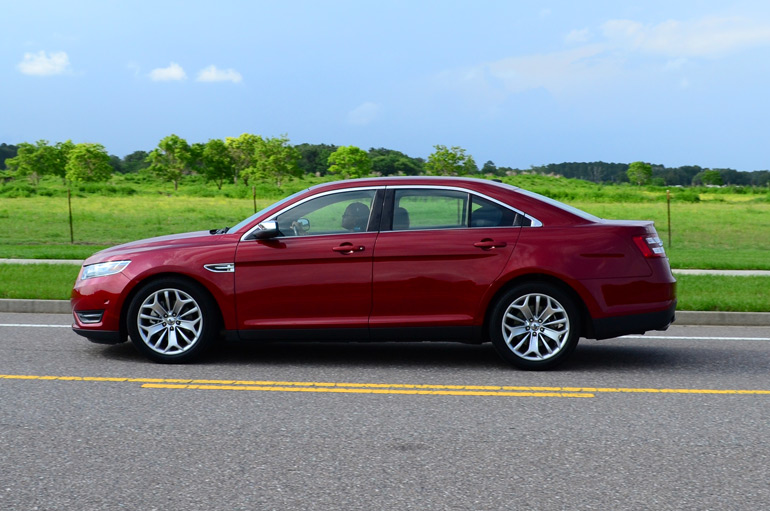 My experience with the new Taurus EcoBoost 4-cylinder was quite surprising in that it handled its mass well and sometimes felt light on its meaty 255/45R/R19 tires wrapping aluminum 19-inch wheels. Handling was a decent take away as the Taurus restricted the expected understeer, espeically with it being a front wheel drive vehicle with a good amount of torque. Though, torque steer is kept to a minimum and only creeps up when you get a little enthusiastic by disabling the Adavancetrac, which is a combination of traction control and stability control.

Charting the fuel consumption numbers, having the EcoBoost 4-cylinder engine as an option will not only boost your low-end power but will save you money at the pump by getting an estimated 22 mpg city and 32 mpg highway. That is a combined 3 mpg savings over the standard 3.5-liter V6 engine, though you will be expected to pay an additional $995 for the EcoBoost 4-cylinder engine. Despite paying the extra grand, the 2013 Ford Taurus seems right at home with the new EcoBoost 4-cylinder engine. I saw a steady 31 mpg on the highway and 21 mpg around town for a combined 26 mpg.  In all, the turbo 4 the logical choice to fundamentally chase after mid-sized sedan competition in more ways than one. 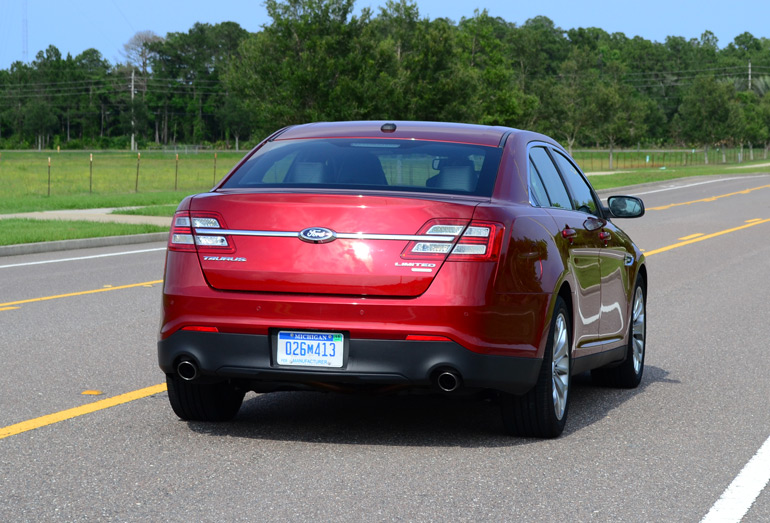 The ride quality of the new 2013 Ford Taurus 2.0L Limited EcoBoost is pretty good thanks to its nicely tuned suspension and long 112.9 inch wheelbase. The audible buzz and turbo wine from the direct-injected 4-cylinder engine is well isolated from the cabin along with most wind and road noises. Body roll is also well managed, especially for the new Taurus’ size having a roof line almost as tall as some crossover utility vehicles on the road. Acceleration time comes in right around 7 seconds from a dead stop to 60 mph. A slight big a turbo lag probably adds to the acceleration time but the 2.0-liter turbo 4 pulls good through mid-range to about 500 rpm short of redline where it feels to have reached its power limit for a second. 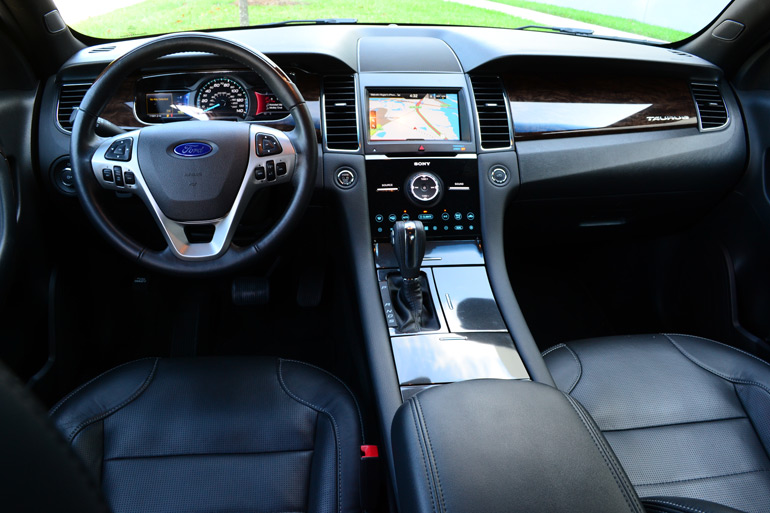 Stepping inside of the new 2013 Ford Taurus Limited 2.0L EcoBoost you will find a familiar cabin layout to that of many other Ford and Lincoln vehicles. Many of the controls and steering wheel buttons are arranged in an easily learned fashion. The gauge cluster is virtually identical to ones found in other Ford and Lincoln vehicles as are the two cluster color LCD screens for vehicle information, MyFord Touch controls and settings. The never-ending updates to the MyFord Touch infotainment system fed through the high-resolution center-mounted LCD touch screen get better with time. Although, the system still suffers from difficulty in accessing specific buttons and the over-all response speed. Ford actually assured me of another update to the system not applied to my vehicle yet designed to improve performance and response. I did not get to test out the latest software update but I will take Ford’s word as to the newest update providing yet another needed enhancement to MyFord Touch. 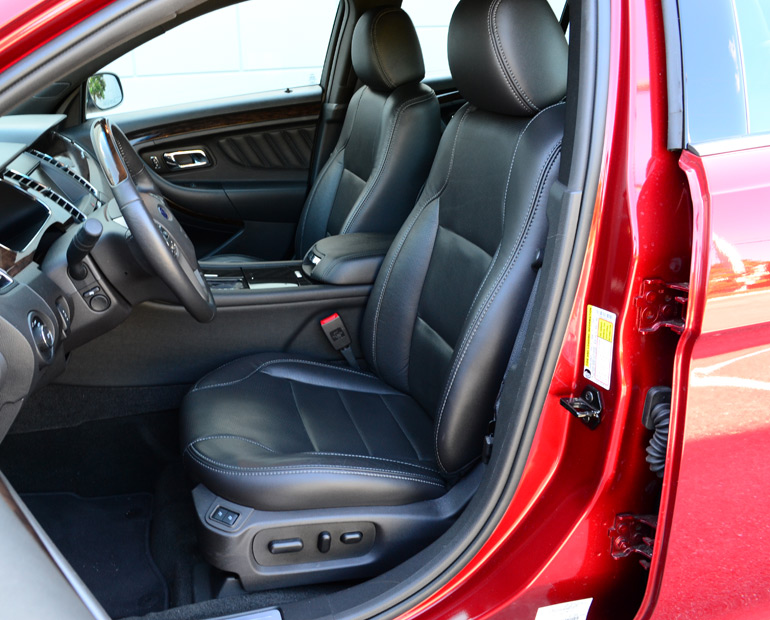 The seating positions in the new Ford Taurus have been improved slightly while having the Taurus Limited equipment group package’s adjustable pedals made way for unexpected additional leg room. The heated and ventilated front perforated leather seats are comfortable with just enough bolstering for light lateral maneuvers.  The heated rear seats have a long bench and just enough leg room for someone 6 feet tall. 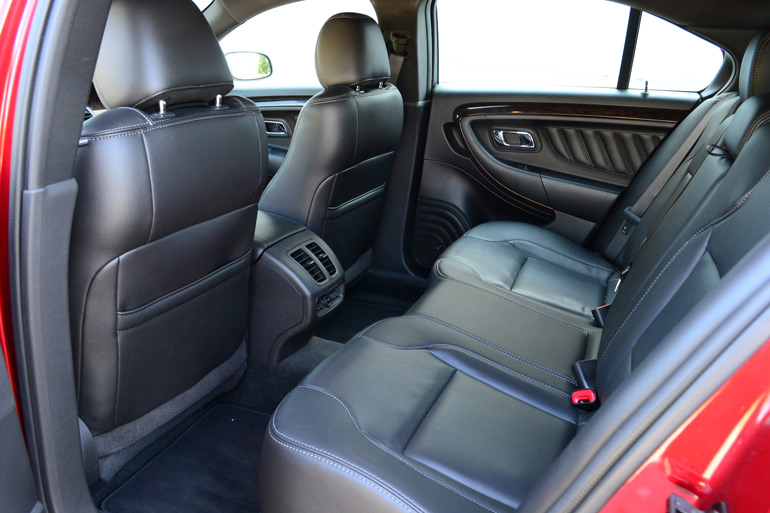