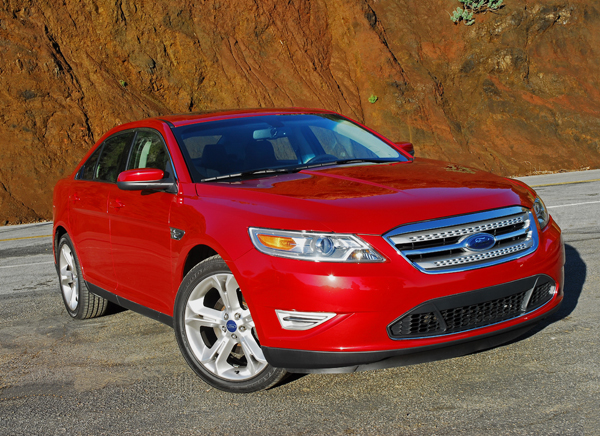 The first time I tested a Ford Taurus SHO back in the early 1990’s I was so enthralled with the car that I picked up my wife and drove it 850 miles to Monument Valley, Utah.

I just picked up the all-new 2010 Ford Taurus SHO and I am so impressed that I wish I could drive the SHO to the moon, that’s how much it has been improved since the last generation.  Today’s Taurus SHO is so much more substantial and luxurious.

The foundation of the new 2010 Taurus SHO is a 3.5 liter twin-turbocharged EcoBoost V6 engine.  This advanced powerplant generates 365hp at 5,500rpm and 350lb.ft. of torque from 1,500 to 5,200rpm, resulting in significantly improved power, flexible torque and fuel economy compared with larger, normally aspirated V8 engines.  This also is Ford’s most powerful EcoBoost engine. 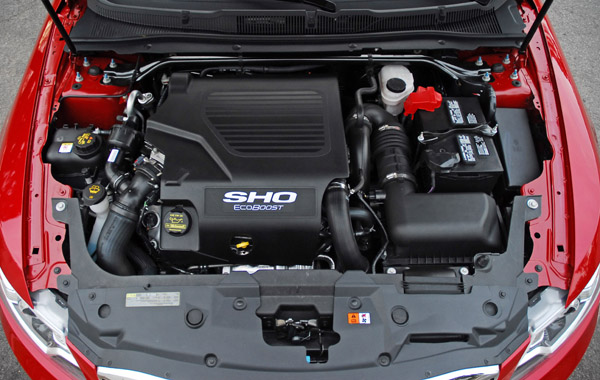 A key feature of this EcoBoost engine is gasoline direct injection.  The direct injection of fuel into the cylinder during the intake stroke, as opposed to port-style injection to an externally mounted intake, produces a well-mixed air-fuel charge.  Fuel vaporization during the intake stroke cools the incoming air, improving volumetric efficiency and lowers the likelihood of knock. 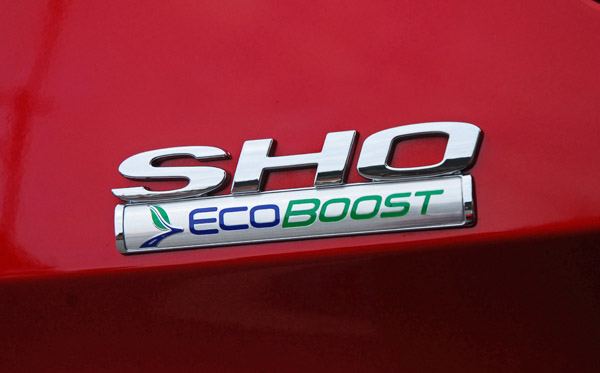 The 3.5 liter EcoBoost V6 also uses twin turbochargers and twin water intercooler, as opposed to a single unit.  The reduced size of each turbocharger results in reduced internal inertia, allowing this advanced engine to avoid the ‘turbo lag’ often prevalent in earlier-generation turbocharged applications.  From the driver’s seat, the rewarding result is linear power delivery across a broad torque band from 1,500 through 5,250rpm.  Peak torque building quickly off idle ensures responsive acceleration from a standing start and a big push on your back as you accelerate quicker than you think.

The quick acceleration of the 365hp engine is enhanced with a 6-speed automatic with manual shift and all-wheel-drive.  SelectShift provides conventional operation or a manual shift mode that gives you complete control over gear selection.  For performance-minded drivers, paddle shifters mounted on the steering column allow ‘match-rev’ downshifts and will hold manually selected gears for precise control.  Intuitively operated, a squeeze on either paddle will deliver an economical upshift under acceleration, while a gentle push forward brings a smooth downshift, synchronizing the engine and transmission speeds for more response and positive engagement.  It is smooth and well engineered.  You’ll really enjoy the dual personality of the 6-speed SelectShift.

Also enhancing acceleration is the unique SHO driveline that is contemporized with the incorporation of a sophisticated All-Wheel Drive System that engages automatically and unobtrusively.  The unit contains an advanced array of internal electromechanical clutches to efficiently distribute torque to the wheels with optimum traction.  Standard all-wheel drive allows the SHO to efficiently deliver its high performance to the pavement under a wide variety of conditions.  With all four wheels turning during a hard launch, the new SHO can accelerate out to 60mph from a standstill in just 5.0sec.  That’s very fast for a full-size sedan. 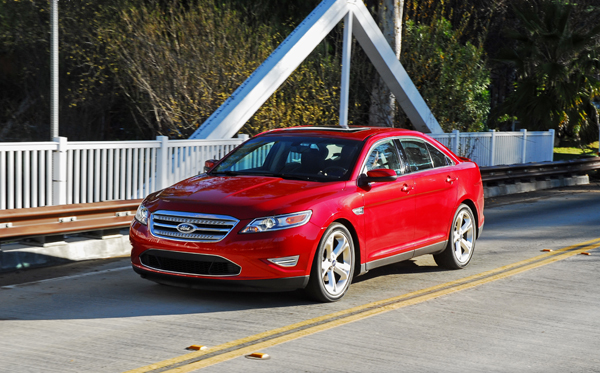 Taurus SHO takes full advantage of the multi-link SR1 rear suspension design.  Named for its 1:1 shock absorber ratio, this configuration provides an inherently stable baseline for the SHO development team to fine tune for enhanced driver control and agility.  In addition, the SR1 rear suspension geometry provides increased travel, while enabling the use of standard 19in. and optional 20in. wheels and tires. 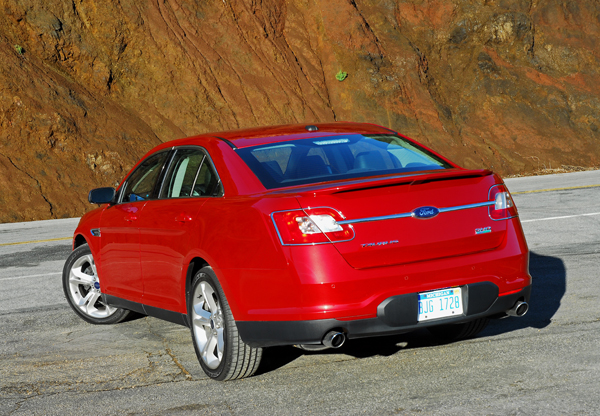 Quickly slowing the Taurus SHO down from speed are big 13in. vented discs up front clamped with twin 48mm cast iron calipers, while the rear brakes measure 12in. solid discs and are clamped with single 43mm cast iron calipers.  Power Assist, ABS, AdvanceTrac and Traction Control work in unison to help with your control of the car when traveling on slick or wet pavement.  When braking softly or hard the feel of the pedal was very linear insuring me that the car would be stopping quickly and straight.

A key element of the authentic SHO formula is the subtlety of its unique design cues.  Up front are HID headlamps, a uniquely finished interpretation of the Ford signature three-bar grille, wide lower air-intake, chin spoiler to help keep the front end hugging the ground during high-speed cruising, a SHO-specific white LED parking lamp strips, plus a power-dome hood enabling the twin-turbocharged engine to fit neatly underneath.

From the side you see a steeply raked windshield A-pillar, a chrome strip around the greenhouse, pull-out door handles, fender vents with Taurus stamped in the middle, aluminum door sill plates with Taurus inscribed, deep lower side extensions that follow the front fascia through the rear fascia, 19 or 20in alloy wheels and tires that fill up the fender wells.  The rear features large, wraparound lamp clusters, a decklid-mounted spoiler, a chrome strip at the center of the decklid cover intersected by a large Ford Blue Oval badge, Taurus and SHO badges and 3in. round twin chrome exhaust tips.  The new Taurus SHO is a wolf in sheep’s clothing! 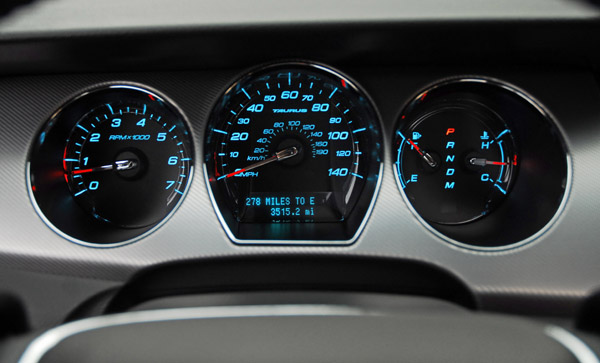 The new Taurus SHO interior encourages performance driving.  The dashboard and ‘eyebrow’ shelf reminds me of last year’s dual-cockpit Mustang design that adds a sporty touch with the real aluminum trim plates.  All of the material is soft and made of high-grade material.  Leather-trimmed, high-backed sport seats use Miko Suede inserts made from recycled post-consumer yams from plastic soft drink bottles.  The 10-way power seats are well bolstered for spirited driving.  The three-pod instrument cluster is straight-ahead and easy to see and is finished with chrome rings as all of the instrument panel controls are.  The SHO accelerator and brake pedals are trimmed in aluminum.

Ford engineers and designers have thought it through to come up with a performance sedan that is fun to drive as a proud owner of the all-new SHO. 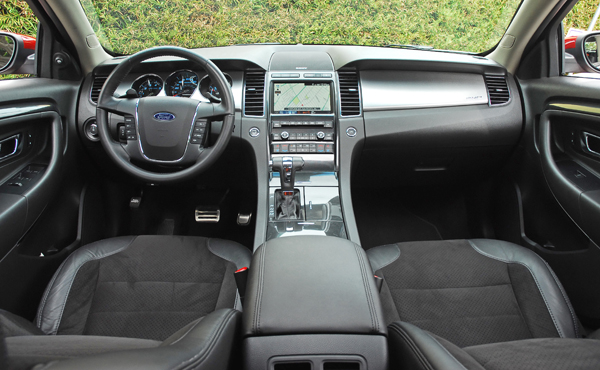 Available options not mentioned above include Reverse Camera System that activates in reverse gear projecting on the on the windscreen mounted rearview mirror, adaptive cruise control which allows the driver to set the SHOs cruising speed while using radar technology to monitor traffic traveling up to 600ft. ahead, automatically adjusting speed to help maintain a preset distance between vehicles, Collision Warning with Brake Support works with the adaptive cruise control providing visible and audible warnings when slower traffic is detected ahead.  Brake support is activated if the driver does not respond to provided warning, and pre-changes the brake system to prepare the vehicle for stopping.  The Blind Spot Information System (BLIS) with Cross Traffic Alert consists of two multiple beam radar modules, one each per rear quarter panel.  When an adjacent vehicle enters the defined blind spot zone, an indicator alert provides driver warning in the corresponding sideview mirror, Cross Traffic Alert uses existing BLIS radar modules to sense oncoming traffic while the SHO is slowly backed from a parking space.  When cross traffic appears within three car widths, the system provides a visible message on the instrument panel in combination with a sideview mirror warning and an audible signal.  Multi-Contour Seats with Active Motion can be specified in conjunction with heated and cooled first-row positions in the new SHO.  Multi-Contour functionality provides subtle but continuous massage to help prevent back pain and fatigue and is ideally suited for long-distance drivers.  It felt invigorating for me and my driver this week.  Voice-Activated Navigation system includes a 10-GB music box hard drive and a single CD/DVD player.  When combined with the optional rear camera system, rearview projection appears on the centerstack-mounted navigation screen, the Sony Audio system offers 12-speakers, a digital amplifier, 390-watts of continuous power (RMS) 115 dB of maximum bass sound pressure level and Dolby Pro Logic II surround sound.  Finally, an electric sliding sunroof lets more light into the cabin and adds to the ventilation. 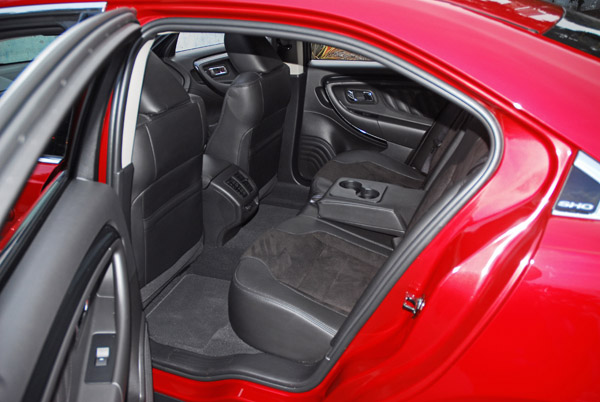 I’ve waited along time for Ford to bring back the Taurus SHO and they didn’t fail me at all.  The only item I would change would be to lower the front seats to give you a sportier feel, but while this car zooms out to 60mph in just 5sec., it is a high-performance cruiser rather than a high-performance sport sedan.  Other than that the car is as close to perfect as can be.  The base price of the SHO starts at just $37,170.00 and a nicely loaded model with the sport package that I tested stickered at just $43,050.00, not bad for a high-speed cruising sedan.