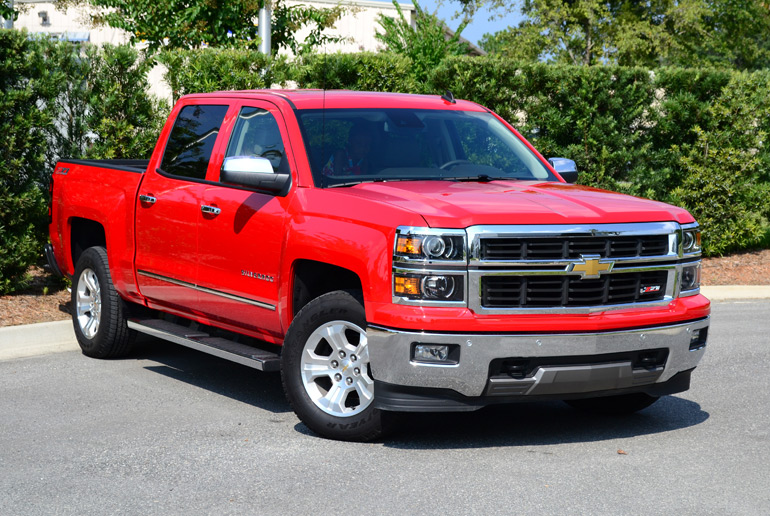 The all-new 2014 Chevrolet Silverado embodies the latest update to Chevrolet and GMC’s line of trucks building upon a long lineage of tried and true American pickup trucks. The steadily beating heart of America lives on in the new Silverado attempting to appease those expecting a rugged vehicle to get just about any feasible job done – but with the comfort, safety and easy of usability that today’s technology has paved the way for. The new Chevy Silverado is just that all wrapped up under a value-perceived price tag. 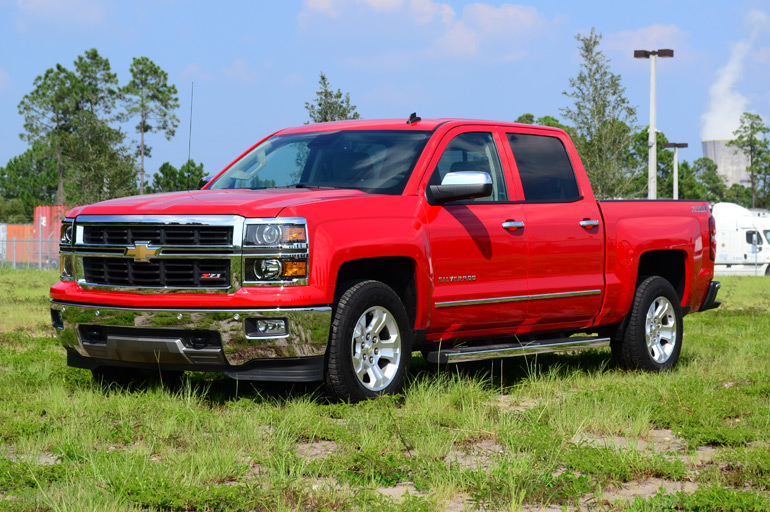 With the introduction of other all-new designs from auto manufacturers that are fortunate enough to be well endowed within the truck segment, Chevrolet had no plans to be left behind. The new 2014 Silverado, being one of the top sellers and highly sought-after pickup truck offering in America, there was naturally room to make the Silverado the best one yet. 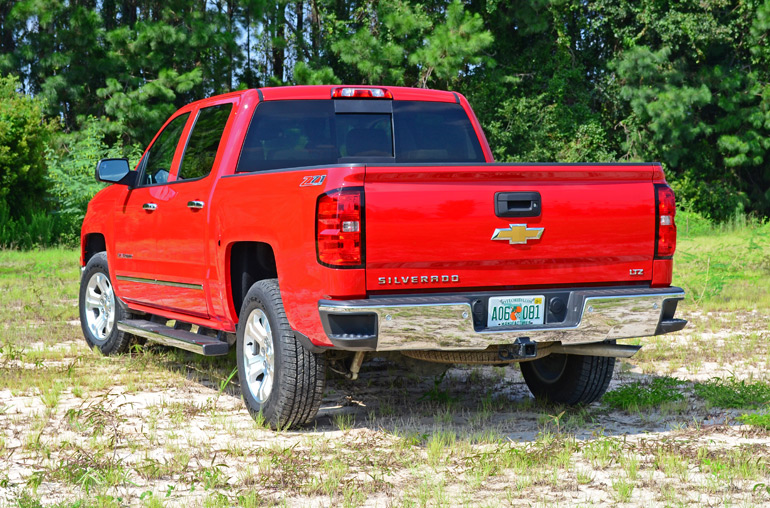 During my time in the new 2014 Silverado, I was taken back to many times I have driven older variations of Chevrolet trucks but never had they offered a nicer interior or one that just made sense in the retrospect of the many things people tend to do with trucks. It is safe to say the new Silverado outfitted with my test vehicle’s Z71 off-road package and advanced 4×4 drive system it is a capable truck not afraid to get its newly sculpted body panels dirty. 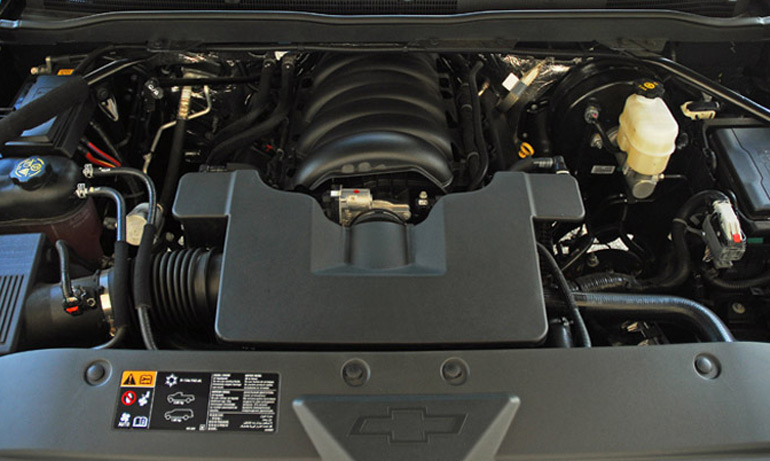 Powered by the 5.3-liter V8 Ecotech3 engine producing 355 horsepower at 5,600 rpm and 383 ft-lbs. of torque at 4,100 rpm, the new Silverado fits the bill to trailer upwards of 11,500 pounds with the proper configuration. Of course without a full load the new Silverado is quite adept to making quick runs around town and comfy travels on the highway. Runs to 60 mph come in at about 6.7 seconds while the cylinder deactivation seamlessly works in the background for highway fuel consumption at an EPA estimated 22 mph. City EPA figures come in around 16 mpg. However, on my frequent trips through inner city streets I saw a steady 17.4 mpg and my highway travels yielded 21 mpg. I could not consistently break the 21 mpg barrier I faced on the highway but was able to get short spurts of about 23.5 mpg when steadily holding 70 mph with cruise control. There is no doubt that the Silverado is much improved over previous generations in terms of fuel economy, especially taking advantage of updated cylinder deactivation and direct injection in the latest 5.3-liter V8 engine.

Fortunately, the 5.3-liter V8 does not disappoint in its pulling power especially when the new Silverado is properly equipped with an optional Max Trailering Package, capable of towing up to 11,500 pounds. Though not equipped on my test vehicle, the Max Trailering Package is a nice addition to really open up the possibilities for the iconic American pick-up truck. Adding to the new Silverado’s capabilities the Z71 off-road package gets monotube shocks, automatic locking rear differential, all-terrain tires wrapping 18-inch machined-aluminum wheels, and hill descent control. The 4WD system can be switched out of 2WD and automatic modes to a locked 4-wheel-drive through a dash control knob activating the underbody shielded transfer case with no fuss. Getting stuck in a rut all of a sudden becomes an afterthought in most situations you would put such a vehicle in.

Driving dynamics for the new 2014 Chevy Silverado Z71 Crew Cab 4×4 are much improved for a pickup truck. The suspension vibrations and body clatter is kept to a minimum while the body roll and overall road-going feel gives you some assurance but lets you know its limits when you are about to cross them. The quick-acting stability and traction control keep the light rear-end in check under heavy acceleration and turn-ins. There is hardly ever a time where you feel as if the Silverado is about to swing its rear box around. Speaking of the rear box, a new optional EZ-Lift and Lower Tailgate is a welcomed feature where the tailgate no longer plunks down with a hard thud when opening. Sure any regular tailgate making an abrupt open may assure some of its true ruggedness, nevertheless, my new Silverado Z71’s standard EZ-Left and Lower tailgate proved to smoothest of pickup truck tailgates, and easiest to close. 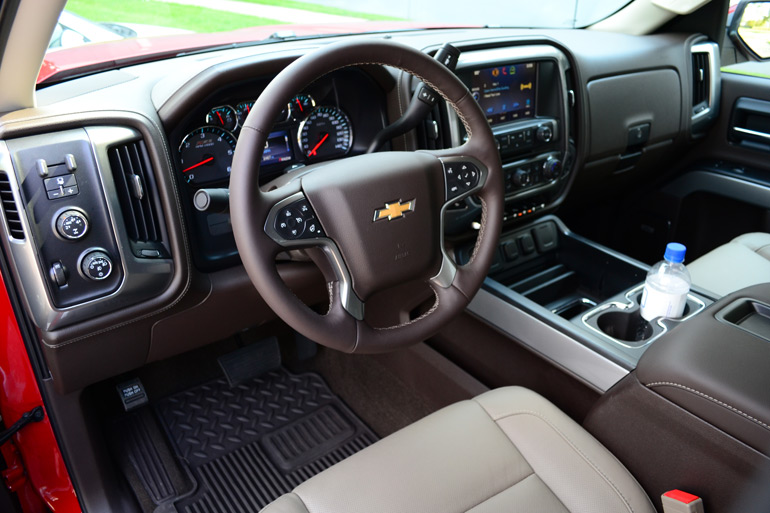 The all-new cabin of the 2014 Chevy Silverado is been reworked all around. The new optional leather-appointed seats of my Silverado Z71 featured ventilation and heating. The two optional bucket seats up front, replacing the standard 40/20/40 leather appointed split bench, proved to have a surprising bit of bolstering to keep you in place with plush seatbacks. Rear seating, only lacking the bolstering, proved to be almost as comfortable as the front only hindered by their positioning and smaller surfaces. Integrated into the driver’s seat, through the optional Driver Alert Package (front and rear park assist, lane departure warning, forward collision alert) found on my Silverado Z71 test vehicle, was the safety alert seat feature, which vibrates a portion of the seat when the vehicle’s front or rear sonar sensors sense approaching options when you are either backing up, slowly moving forward, or about to change lanes while a vehicle is in your blind spot or you are about to collide with a vehicle in front of you at speed. Additionally, the system will vibrate when detecting vehicles crossing your rear path, mostly when backing out of a parking space. 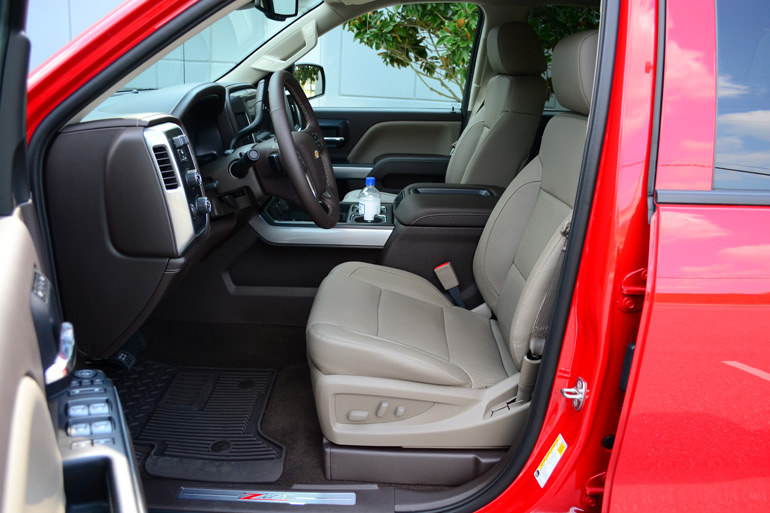 The all-new 2014 Chevrolet Silverado made the short list for the final choice in 2014 North American Truck of the Year award. The Silverado has what it takes to take the crown; though, the competition remains strong. The Silverado’s value is still a major player where my fully loaded-up Silverado 4×4 Z71 Crew Cab tested out at a price of $48,595. A base Silverado Crew Cab starts at just $31,715 for the V6 2wd version while the 5.3-liter V8 Z71 2wd Silverado starts at $36,155.