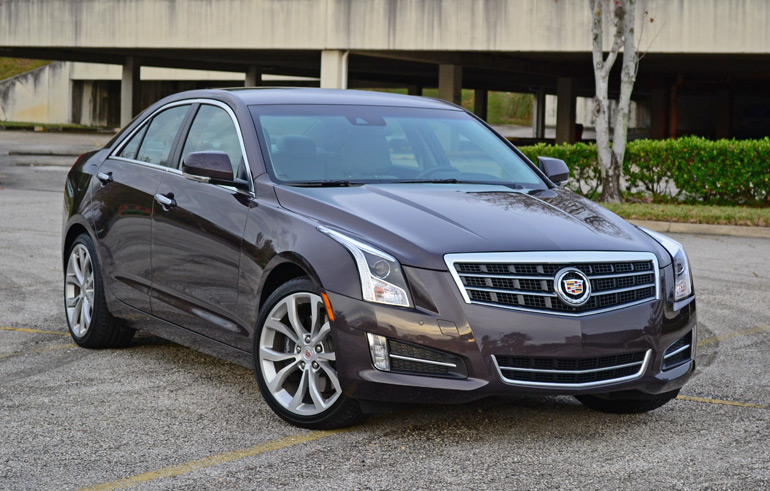 Entering into its second year, the new 2014 Cadillac ATS has maintained its award-winning formula being a basis to help launch the General Motors luxury brand to disturb its German competition. Being an outright and forceful competitor in the compact sports luxury segment, the new Cadillac ATS has turned many heads for all of the right reasons due in part to 3 engine choices, agreeable looks, luxurious amenities and a surprising performance pedigree in its turbo and V6 powertrains. 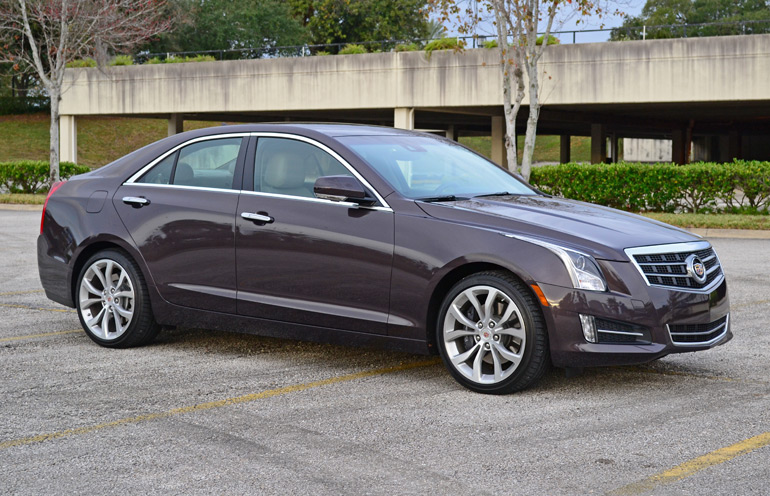 For the 2014 model year the Cadillac ATS remains mostly the same with the exception of a larger diameter steering wheel on automatic transmission models with paddle shifters, a new auto-highbeam headlight feature added to the set of Driver Awareness packages and a 110-volt power outlet for navigation-equipped models.

After taking the luxury automotive market by storm receiving many accolades and awards during its conception in 2012, including the 2012 North American Car of the Year award, Cadillac continues to build upon a well-oiled principle trickling down many of the ATS’ energizing characteristics into the rest of brand’s lineup. 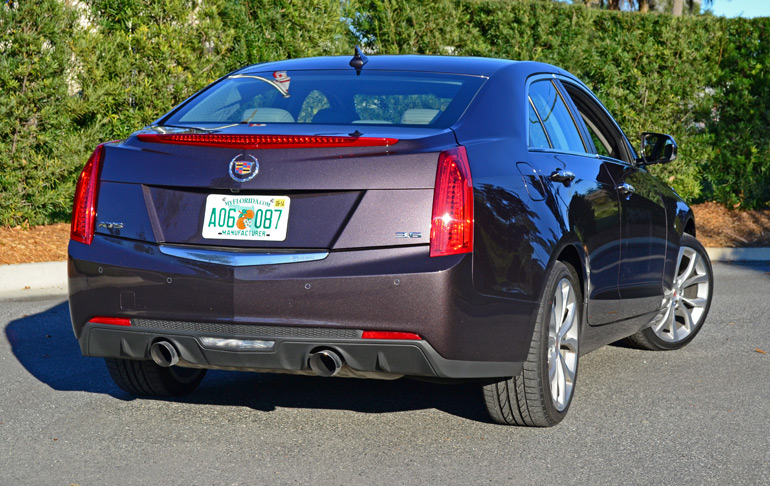 Interestingly enough, some of the long-touted elements that have placed the BMW 3 Series on a pedestal for many years have somehow found their way in the new Cadillac ATS with a unique American flare. Many elements from award-winning compact luxury sedans over many have been emphasized in the Cadillac ATS collimating a wide array of highly sought-after features, driving characteristics, overall performance and luxury comfort. Basically, the new Cadillac ATS exudes the impression of a compact sports luxury sedan that was conceived decades ago instead of being in the niche for just 2 years.

My review of the new 2014 Cadillac ATS put me behind the wheel of the V6 model featuring General Motor’s 3.6-liter V6 engine outputting 321 horsepower at 6,800 rpm and 274 ft. lbs. of torque at 4,800 rpm. Directing power to the rear wheels is a 6-speed automatic transmission, which in my ATS 3.6L Premium trimmed test vehicle included steering wheel-mounted shift paddles. The versatility of the new ATS, available with all-wheel-drive for the 2.0-liter turbo and V6 engines and a manual transmission made available for the 2.0 turbo only, makes it a worthwhile rival for its long-standing competition. In the V6-powered rear-wheel-drive 6-speed automatic transmission configuration for my test vehicle, the ATS proves its willingness to be quite the sporty and fun-to-drive vehicle. 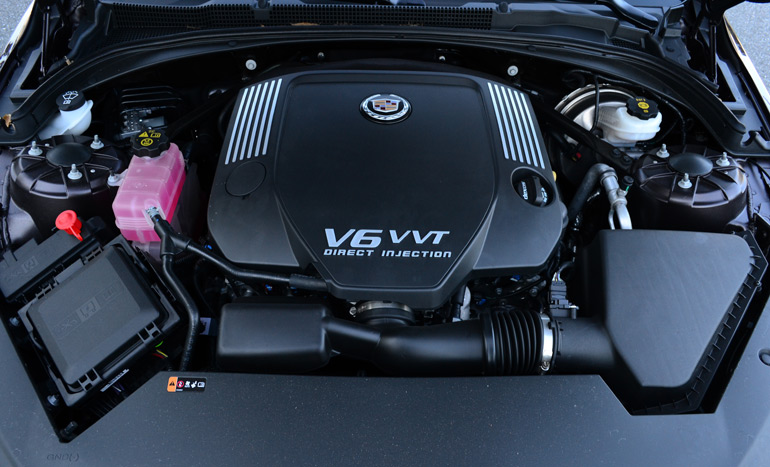 The 3.6-liter V6 engine is robust and has a smooth power delivery all the way up to red line. At the expense of over 300 horsepower the ATS 3.6 gets an estimated 18 mpg in the city and 28 mpg highway. I was able to average about 24 mpg during my time but saw a steady 28.4 mpg on the highway and 19.5 mpg around town. Power comes on strong low in the rpm band and builds with no abrupt surprises within the transmission’s adeptness. However, the 6-speed transmission does adapt to your driving, mostly noticeably when the vehicle is in Sport mode as opposed to the default Touring mode. While in sport mode the 6-speed automatic transmission is apt to perform early rev-matched downshifts when it detects spirited driving through what is technically descried as PAL (Performance Algorithm Liftfoot). Additionally, lower gears are held longer in such cases while in Sport mode, emulating a track-driving experience. The system works seamlessly without too much miss-guided gear-guessing or unwanted gear selections for the current driving style. 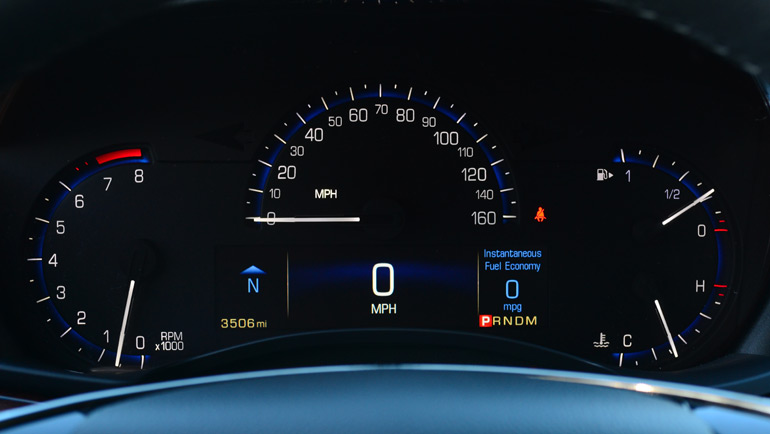 These driver select modes, 3 in all (Touring, Sport and Snow/Ice), also adapt the magnetic ride control suspension system where the prided magneto-rheological shocks are set in either an adaptive touring ride or firm and sporty ride setting. In Touring mode the shocks adapt well to smooth road surfaces helping to keep the body stable but without any unwanted harshness going over bumps or uneven surfaces. Sport mode is a steep depart from touring as the dampers firm up nicely almost to a point where there is a nearly-harsh reverberating bounce when cruising at just about any speed. Sport mode is definitely desirable for a track time but those who enjoy spirited driving around town are surely to find pleasure in the advanced responsiveness in the ATS’ chassis dynamics. In all, the experience is remarkable and the over-all ride quality is among the best in the business only giving away to the larger 18-inch wheels and firm summer-performance run-flat tires found on my test vehicle. The run-flat performance tires are prone to diminishing smoothness but prove to be quite beneficial for freeing up vehicle weight by not needing to tote around a spare tire in the trunk. 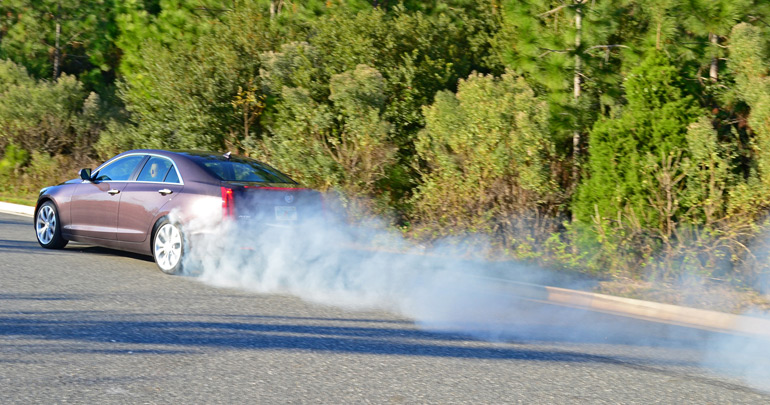 With all aspects of the adjustable magnetic dampers, adaptive yet quick-shifting 6-speed automatic transmission banging through all forward cogs, and throaty V6 engine running right to red line for shifts, the ATS is an excellent competitor in the performance arena. 0-60 mph comes in around 5.7 seconds and braking is strong coming to a stop from 60 mph in about 108 feet thanks to the sticky summer performance tires and Brembo brakes biting down on big rotors up front. The adaptation of traction and stability control is also enthusiast-minded as a competitive mode allows the rear end to hang out a bit longer before stability control softly intervenes. Simply disabling all systems shows that the ATS 3.6 isn’t shy about performing lively burnouts while eloquent drifts are possible with its near 50/50 weight distribution.

During my week with the new 2014 Cadillac ATS 3.6L Premium I was fortunate enough to experience the vehicle on a closed parking lot to really put it to the test on some hard lateral excursions with heavy braking and acceleration to the top end of 3rd gear. Even tough most purists would prefer a manual transmission in such a vehicle like the ATS, which can only be had in the 2.0-liter turbo version, I took delight in the 6-speed auto’s manual shifting mode’s true abilities. To my surprise the auto box allows you to rev-match downshift without many constraints. Basically, at the threshold of a previous gear’s limit the transmission will allow you downshift even though the rpm lands near redline. This proves to be advantageous in preparation for a turn or apex during tracking sessions. Additionally, the 6-speed automatic hardly ever overrides up or down shifting. The system will allow you to bounce off of the rev limiter and hold a low-rpm higher gear under full throttle. The programming of the new Cadillac ATS’ ECU is certainly enthusiast-minded. 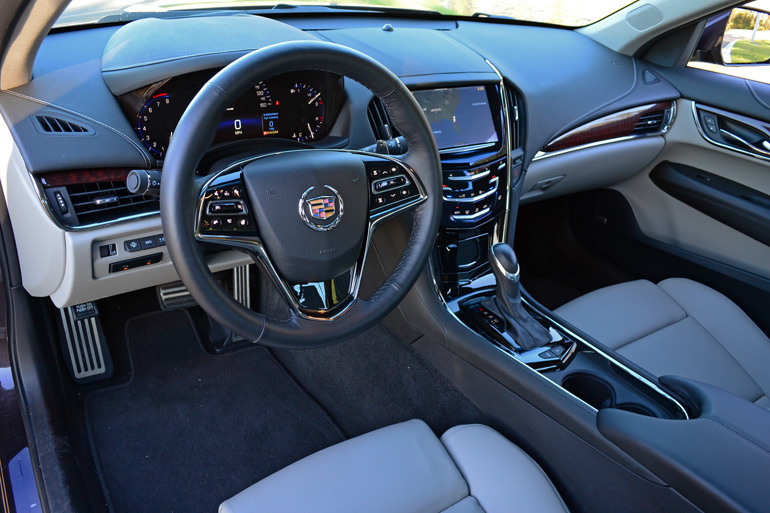 Aside from the new Cadillac ATS’ performance and road-going attributes, the interior remains to be an extension of its capabilities on asphalt. The fit and finish of the new ATS’ interior is well thought out. The only pitfall of the ATS’ interior is CUE, Cadillac User Experience infotainment system. The system’s initial perception is good but diving deep into some of the menu sets and functions prove to find its faults as some of the screens react a bit slow. Although, the system is never too slow to the point of frustration but it can be distracting to a driver who’s focus may be taken away for a second or two from the road. The use of swipe, pinch and zoom functions, much like that of operating an iPad, prove to be more of a nice novelty than something as fluid as on an iPad or iPhone’s screen. Of course with the high-gloss finish of the screen’s glass, fingerprints collect in abundance requiring frequent cleaning. 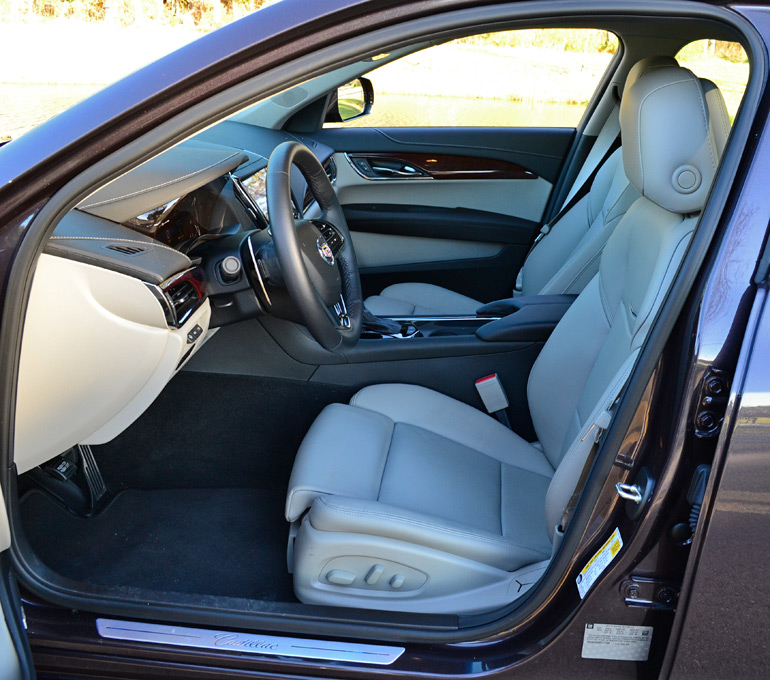 The seats in the new Cadillac ATS provide good lateral support and comfort with a vast amount of adjustability forward and backward. With the immense front seat adjustability it makes it easy for those over 6 feet tall to find the optimal driving or sitting position up front. The back seats, however, are rather small and are not welcoming for tall adults as legroom and knee room is short. Trunk space is somewhat smallish too with only 10.2 cubic feet. Nevertheless, on Luxury and Premium trim levels of the ATS you get 60/40 split-folding rear seat backs to open up the cargo space for large objects. 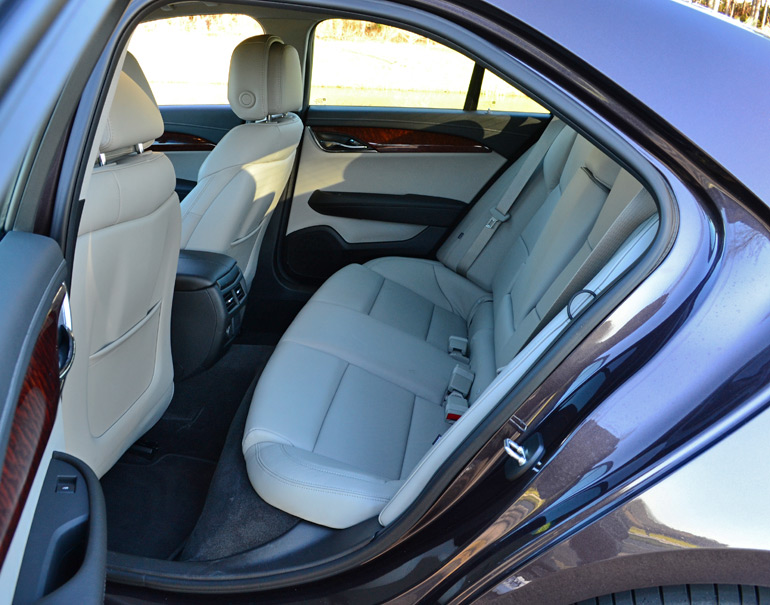 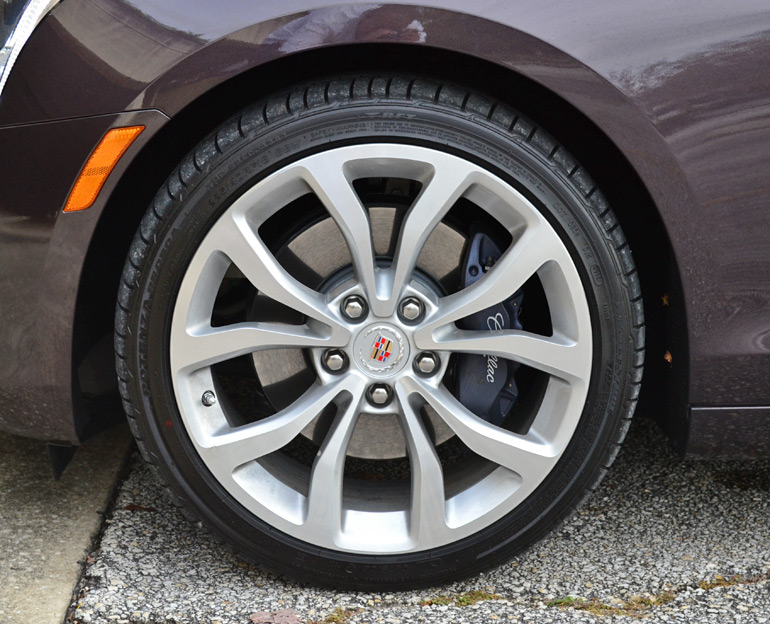 The 2014 Cadillac ATS remains to stay competitive in its segment where it has a starting price of just $33,990. My loaded up 2014 Cadillac ATS 3.6L Premium Collection comes to an as-tested price of $49,115 including a $925 destination charge, placing it in an excellent position to keep its competition near the top of the shopping list for those seeking a compact luxury sports sedan with a consistent performance edge.