Nissan Sport Sedan Concept At 2014 NAIAS Could be Next Maxima 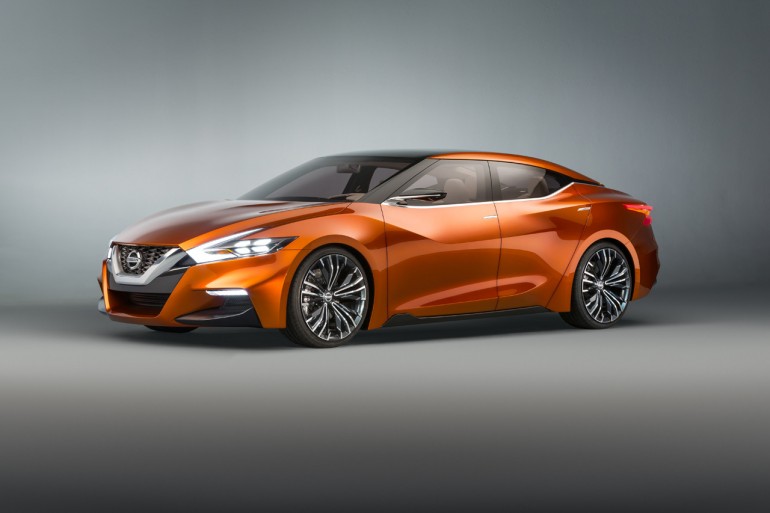 We already knew about Nissan unveiling something that should set the tone of the upcoming redesigned Maxima. What we think is the basis for the next Maxima, was revealed today at the North American International Auto Show in Detroit as the Nissan Sport Sedan Concept. 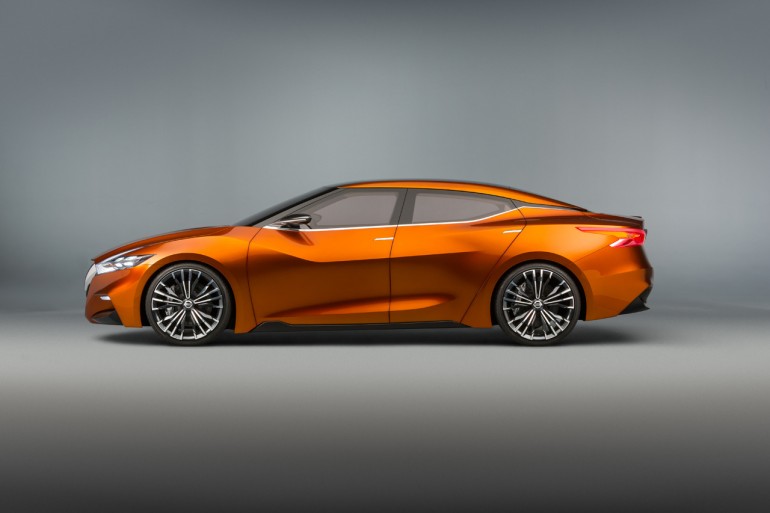 The new concept has many of the new styling language found in the Nissan brand while it sports 4-doors giving us the indications of being the next Maxima. For a while, the Nissan Maxima received a lot of flak for retaining the ‘4-door sports car’ moniker. It is possible, by the looks alone, that the new Nissan Sport Sedan Concept could capture that nomenclature so consumers and enthusiasts alike won’t give Nissan such a hard time about calling what we see here a 4-door sports car. 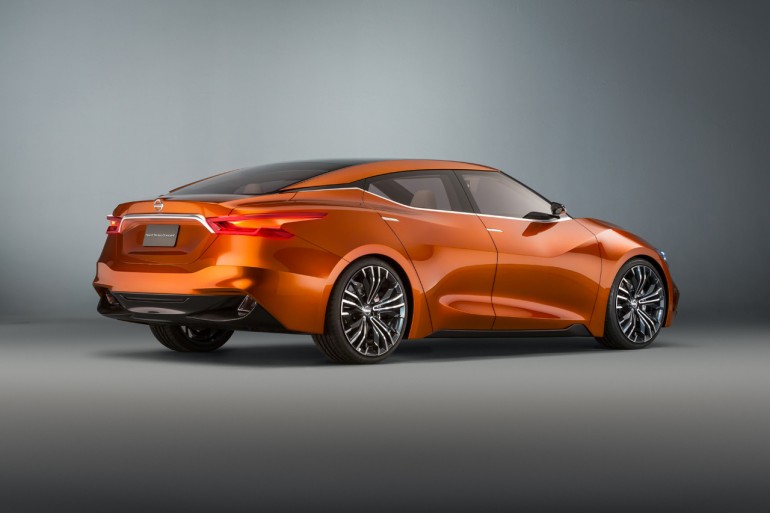 This Nissan Sport Sedan Concept is said to be powered by a 300-horsepower 3.5-liter V6 mated to a CVT transmission. That layout is all-too familiar to what we already see in current Nissan products. We are not so sure a CVT transmission belongs in a 4-door sports car, though Nissan could do away with that old classification. Though, we fail to find the sportiness in any CVT transmission. However, this concept does look pretty awesome and you could easily call it sporty.

Design has long been a differentiator between Nissan and its competitors – along with performance, innovation and technology. Now, as the company celebrates its 80th anniversary, it is doing so with the world debut of the Nissan Sport Sedan Concept at the 2014 North American International Auto Show in Detroit.

The Sport Sedan Concept, a design study with a particular emphasis on next-generation design and sporty style, was created to embody the essence of a true sports sedan – that rare execution of 4-door sedan with the aura of a real sports car. It previews a future production vehicle intended for owners with a passion for cutting-edge design and driving dynamics.

Next-Generation Nissan Design Language
The Sport Sedan Concept joins a trio of advanced concepts that share signature design aspects that will be adapted to all future Nissans. Along with the Nissan Resonance and Friend-ME concepts that were introduced in 2013, the Sport Sedan Concept shares the new V-Motion front aspect, “floating” roof and boomerang-shaped headlights and taillights.

As demonstrated by the three diverse concepts, these distinctive design cues will be incorporated into a range of body types from sedans to crossovers.

“Our new design direction mirrors the strength, power and capabilities of the engineering and innovation that serves as the foundation of every Nissan vehicle,” said Nakamura. “Nissan is a brand for people seeking bold and passionate experiences, and who are willing to make choices outside of traditional boundaries. That’s why Nissan is committed to breaking new ground in automotive design, as expressed in the stunning new Sport Sedan Concept.”

The exterior of the Sport Sedan Concept is marked by low, wide proportions, with a lowered hoodline and reduced ground clearance compared to traditional sedans – elements that would be right at home in a sports car.

The “V-Motion” movement of the front end flows from the dramatic chromed grille up through the hood. The front of the Sport Sedan Concept also incorporates the large LED boomerang headlights, a deeply scooped front fascia and wide, sloped windshield.

The profile of the vehicle is equally powerful, with its dynamic bodyside lines adding a strong sculptural feel and connecting the wheels and tires – which are pushed out to the four corners.

There is a projection of motion, even when the vehicle is standing still. The Sport Sedan Concept rides on custom 21-inch aluminum-alloy wheels mounted with low-profile 275/30R21 tires.

The distinctive silhouette blends smoothly into the rear design, which is capped by the high deck, large chrome trunk accent and wide, deeply scooped rear fascia. As in the front, the boomerang rear combination lights accentuate the centered feeling and push outward to edges.

The unique “floating” roof adds a sense of openness and lightness in contrast to traditional sedans’ heavy cabin appearance.

“The innovative roofline, which is also prevalent on Resonance and Friend-ME, makes it seem as if there are no pillars at all, enhancing the sense of athleticism and sportiness,” said Nakamura. “The roofline also contributes to the Sport Sedan Concept’s class-leading stance, which balances the look of the substantial lower body and a streamlined cabin.”

The final exterior touch is the unique “Strad Amber” paint that was inspired by the craftsmanship and rich finish of noted classic violins – instruments capable of producing vibrant intensity at times and at other times a soft stillness. The elaborate candy color paint finish is achieved through application of an orange-amber topcoat over a base of gold paint, creating a distinctive depth and bespoke richness.

The Sport Sedan Concept’s interior also offers cues to future production designs. Premium materials are found throughout, with the use of diamond-shaped graphics on the quilted seats, stitching and panels enhancing the sense of dynamic motion. Rather than traditional flat surfacing, the diamond treatment adds three-dimensionality. The edgy and geometric look was inspired by modern furniture, apparel and accessories. The interior also features high-contrast colors and facet metallic accents. All these aspects finely express Nissan’s individual authenticity and modernity.

The front-wheel drive Sport Sedan Concept is powered by a 300-plus horsepower 3.5-liter V6 engine backed by a sport-tuned Xtronic CVT® and features an innovative suspension layout with performance dampers.

The Nissan Sport Sedan Concept was created by Nissan Design America in San Diego, California and developed at the Nissan Global Design Center in Atsugi, Japan.

– Third in a Series of Nissan Concepts
– Resonance, Friend-ME and Sport Sedan Concept
– Defines the Next Generation in Coupes, Sedans and Crossovers

First there was the Nissan Resonance, with its boldly futuristic aerodynamic styling signalling the direction of upcoming Nissan mid-size crossovers. It made its world debut at the 2013 North American International Auto Show.

Then came the Nissan Friend-ME, showcased at Auto Shanghai 2013, with its category-busting energetic and provocative modern design.

Together the three concept models form the roadmap to the next generation of Nissan exterior and interior design evolution – and the global design-led renaissance of the Nissan brand.

“Nissan’s design language is our brand promise – Innovation and Excitement for Everyone – rendered in metal,” said Nissan Senior Vice President and Chief Creative Officer Shiro Nakamura. “We are continually pushing the envelope, as the Sport Sedan Concept shows. It is a car that is more emotional, more exciting and that provides a strong hint of the design direction we are taking.”

The strong front end is marked by Nissan’s “V-Motion” movement, which flows from the front grille through the hood to create an impressive cadence and emotional attitude. The unique boomerang-shaped lighting signature also accentuates the rear designs of each vehicle.

The innovative “floating” roof, also featured prominently on Resonance, Friend-ME and the new Sport Sedan Concept, gives an impressive sense of lightness and sophistication. The thin, sculpted pillars make the cabins of each concept appear less heavy and help open the greenhouse for an airy, inviting interior environment.

Resonance, Friend-ME and Sport Sedan Concept also share an edgy muscularity, derived from their low, wide stances with tires placed far out to the corners. The designs also utilize short front and rear overhangs, reduced ground clearances and small gaps between wheels and fenders. The resulting look imparts a sporty and athletic strength, rather than brute and aggressive force.

Inside, the trio of advanced concepts provide private-yet-connected spaces for drivers and passengers. The high tech, streamlined feel of each interior derives from a combination of magnetic detailing and use of high-contrast interior colors and materials.

“These distinctive design aspects will be applied to all future Nissan models,” Nakamura concludes. “Nissan design will possess consistency and diversity which covers all body types, from sedan to crossovers.”