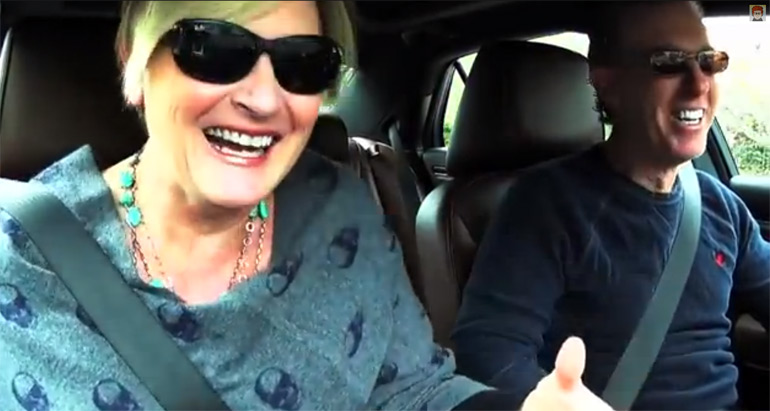 What’s up Automotive Addicts? BIG Thanks to your Host Malcolm for inviting me to post here every Friday with car coolness from Hollywood.

Most of you may be familiar with my show 5MINUTE DRIVE as it airs on Youtube as well as The Auto Channel TV Network in Florida, but we’ll be posting them here on AA as well. It’s a Talk Show from a Car where I feature Celebs who love cars and we just get to act stupid. It’s not a review show, so don’t expect the specs on the vehicular contraptions as thats what Malcolm does best here, but they’re just fun entertainment.

Upcoming guests will be Rodney Allen Rippy, Director Brian Levant and even a Jumbo Jet Pilot! I’ll also be doing a drive in a Malibu Fire Engine! But for now…

So excited about this week’s episode with my guest was DENISE CROSBY from Star Trek The Next Generation, Pet Cemetery & Ray Donovan. We had a blast, tooling through Pacific Palisades in the new 2014 CHRYSLER 300C Varvatos Luxury Edition and talking everything from Acting challenges, Gandhi and John Varvatos himself. Can you recognize the opening music by Acoustic Labs?

The Varvatos Edition Chrysler is an awesome ride at 292hp, heated everything, incredibly comfortable and elegant. We especially liked the unique sound system. 😉 Denise was an awesome guest (Don’t forget to follow her on Twitter!), so join me in a BIG THANKS to her in the comments below. And thanks to YOU for welcoming me to Automotive Addicts!