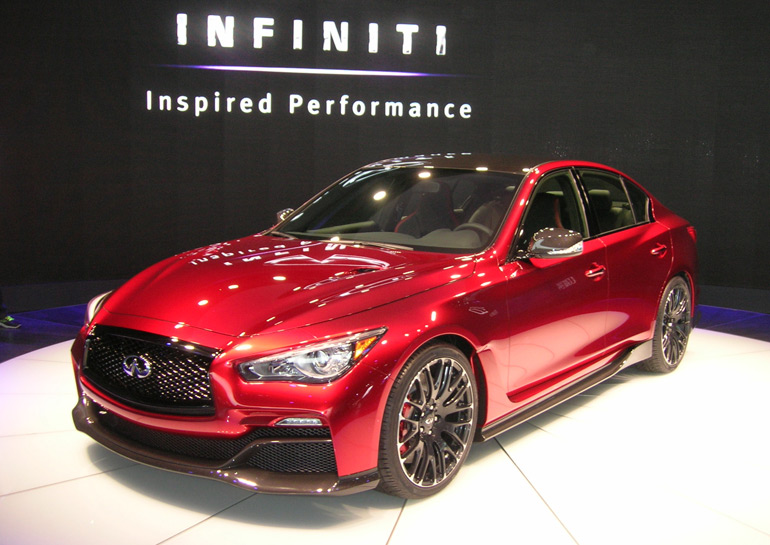 As we suspected, Infiniti is serious about pumping out some major power out of the all-new Q50 in the form of the Eau Rouge Concept as they give us a glimpse of four time Formula One world champion and Infiniti Director of Performance, Sebastian Vettel, piloting the 560-horsepower 4-door Godzilla.

It is rather refreshing that Infiniti will basically have the Nissan GT-R’s powerplant under the hood in a performance variation of the new Q50. That means there will be a more to come from the brand with a serious performance edge.

We will get more information during the 2014 Beijing Auto Show on April 20th, as we await this 4-door beast’s full introduction.

Hong Kong – Infiniti is pressing ahead with the evaluation of the Q50 Eau Rouge high-performance vehicle and will show footage of the testing of a prototype version, at the hands of Infiniti’s Director of Performance Sebastian Vettel, at the 2014 Beijing Auto Show.

The four time Formula One world champion tested the 560hp high performance sports sedan at the Millbrook Proving Ground automotive testing facility, UK, putting the prototype through a challenging series of performance, handling and precision driving evaluations. Vettel’s invaluable feedback will be engineered into the next stages of the prototype’s extensive development program – testing components, packaging and viability.

Further information regarding the Infiniti Q50 Eau Rouge running prototype will be released on press day at the 2014 Beijing Auto Show on April 20.

About Infiniti:
Infiniti Motor Company Ltd. is headquartered in Hong Kong with sales operations in approximately 50 countries. The Infiniti brand was launched in 1989. Its range of premium automobiles is currently built in manufacturing facilities in Japan and the United States. Production in China and Europe will start soon along with the expansion of the brand’s portfolio.

As the Title Partner and Vehicle Performance Partner of Infiniti Red Bull Racing, Infiniti has a far-reaching technical collaboration with the Formula One team, and Sebastian Vettel, its four-time World Champion driver, serves as Infiniti’s Director of Performance.