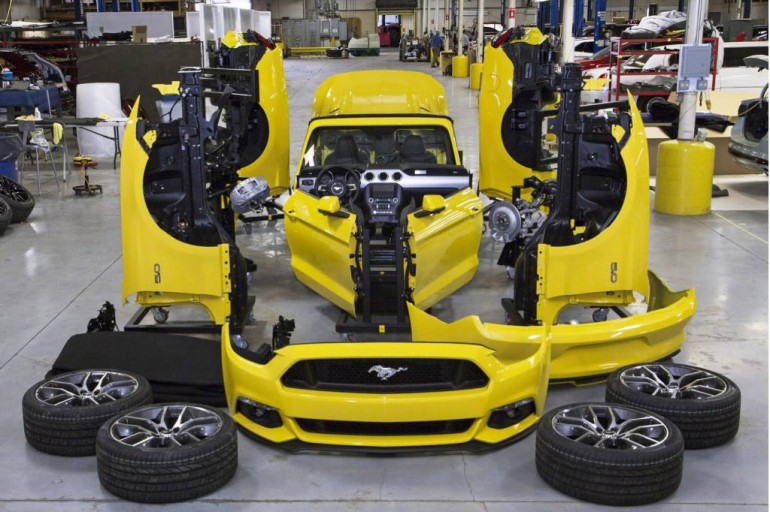 So yeah, the Ford Mustang is turning 50 years old this week and the plan is to honor one of the most iconic car brands by putting one back on top of the most iconic buildings, the Empire State Building. You are probably wondering, how can Ford pull this off again especially with a new 2015 Ford Mustang? Well, here is the full scoop below revealing how the six-weeks of preparation turned into the image you see above, which will allow them to assemble and display a new Mustang atop the Empire State Building.

As the world honors 50 years of Ford Mustang, what better way to celebrate one of the most iconic car brands than putting one back on top of one of the most iconic buildings? When Ford and the Empire State Building decided to display a new 2015 Mustang convertible on the 86th floor observation deck, Ford turned to a longtime supplier for the unique expertise required to make this happen.

In a world where tiny startups are regularly swallowed up by established behemoths, Ford Motor Company and Romulus, Mich.-based DST Industries have been collaborators for nearly six decades. In 1965 – the only other time in the Empire State Building’s 83-year history a car was displayed on its open-air deck – a DST crew was on hand to show off that Mustang convertible.

“This week, the band is getting back together as Ford and DST bring the all-new Mustang to the Empire State Building to honor 50 years on sale,” said Dave Pericak, Mustang chief engineer. “We’ve taken the new Mustang to new heights of technology and refinement, so we decided to take it to new heights literally for this celebration.”

The all-new Mustang may be more advanced than ever before, but sometimes physical limitations demand old-school techniques to get a job done.

“When our engineers sat down with the DST team to start plotting this out in mid-February, everyone quickly realized that some old-school craftsmanship would be needed to successfully place this car more than 1,000 feet above the crowded streets of Manhattan,” said George Samulski, manager, Ford North America design fabrication. “The deck is too high to reach with a portable crane from the street, and the spire that towers more than 400 feet above that narrow deck makes helicopter delivery impossible.”

The only other car display on the Empire State Building observation deck happened in October 1965, when a crew from DST, including retired technician Claude Cochran, sectioned a Mustang convertible so that it could be fit into the elevators of the building.

Following a site inspection in New York to meticulously measure all of the elevators and doors, the engineering team in Dearborn sat down with a scale model of the new Mustang and started drawing lines on it with a marker to represent where it should be cut. The Empire State Building is a historic landmark, with original art deco wood and brass trim in the elevators, so it was crucial to ensure everything have plenty of clearance.

“The only real problem we had in 1965 was the steering wheel,” said Cochran. “When we tried to roll the middle section of the car with the windshield removed into the elevator, the top of the wheel stuck out a bit too far through the door, so we had to tip the cart a bit to get it in.”

In preparing for the 2014 event, the team at DST worked with two early prototype Mustang convertible body shells. The car that would ultimately make the trip to New York was completely stripped down and the surface cleaned up to make sure everything looked perfect before it was sectioned and painted.

The second body was used as a donor by DST metal fabricators to determine where to make the cuts and to fit a custom-built tubular steel subframe that would hold all the sections together. The fabricators built custom rolling carts and wooden crates for each section.

“The observation deck is open to the public from 8 a.m. to 2 a.m., leaving our crew of six with only a six-hour window to get everything out onto the deck and get the car assembled,” said Pericak. “Before we shipped the crates to New York, the crew spent several days practicing the entire assembly process – timing everything down to the minute – much like a NASCAR or Formula One pit crew.”

With several weeks of fabricating and practice behind them, and the crates on a truck and headed to New York, the DST crew is resting up ahead of some long nights this week assembling and disassembling the Mustang.

The Triple Yellow 2015 Mustang convertible will be on display for visitors to the Empire State Building observation deck April 16-17. When the deck closes to the public at 2 a.m. April 18, the crew will descend on the display car to reverse the entire process and remove it before visitors return at 8 a.m.