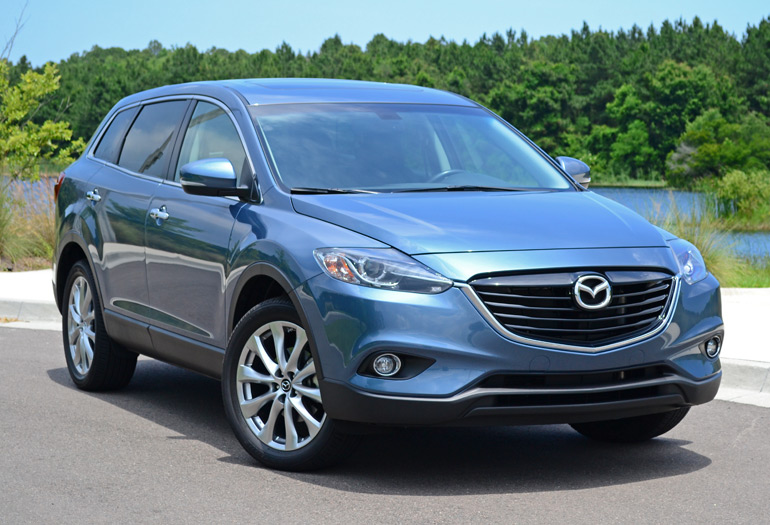 I love it when a well thought out plan comes together. The 2014 Mazda CX-9 seems to be one of the best plans when it comes to retaining the expected comfort and fun-to-drive nature of a 7-passenger SUV. The new 2014 Mazda CX-9 Grand Touring, spending a week in my possession, proved why it is one of the most sought-after 3-row crossover vehicles with a sporty driving character and a relatively low-cost for its segment. 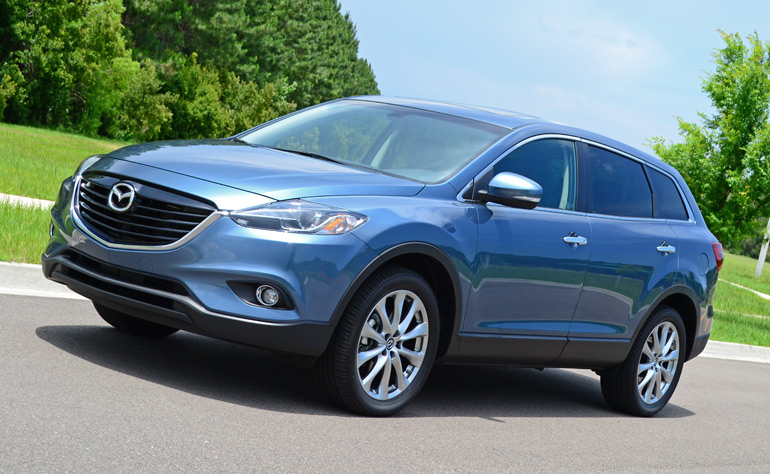 American suburbia thrives off of large vehicles and the crossover utility vehicle is one that dominates the cookie cut neighborhoods here in the good ol USA. With an expected focus on the segment, manufacturers have positioned their offerings to best suit the needs of families and those who want a multi-purpose vehicle without breaking the bank. In that spectrum, the 2014 Mazda CX-9 delivers and at the same times pulls off a nice driving aptitude that places the driver in a welcomed position on the road ahead. 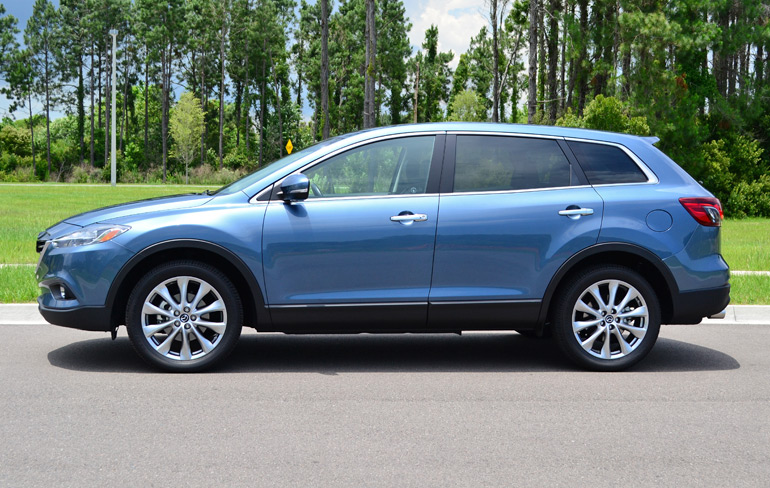 The new 2014 Mazda CX-9 brings about its same over-all design and sporty driving character to the plate making it a highly desirable all-rounder for a crossover vehicle that seats up to 7 passengers. In the scope of 7-seater vehicles, the competition is heavily laced with many competitors. Of them all, the new CX-9 excels at its spacious interior where you get pile in 7 adults without any worries when it comes to space and comfort. Moreover, to add to the attractiveness of the CX-9, it serves up a delightful driving experience, one that has a sportier edge over most of its competition. You can say that the Mazda CX-9 borrows a lot from its Mazda roots to keep the Zoom-Zoom fun factor strong, even in their largest vehicle with seating for up to 7. 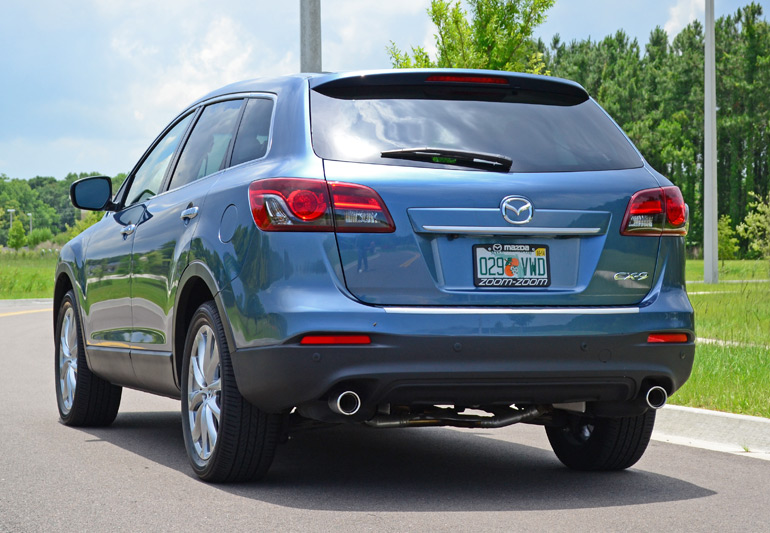 The driving character of the new 2014 Mazda CX-9 is a collaboration of it being powered by a 3.7-liter V6 engine producing 273 horsepower and 270 lb-ft of torque through a chassis that handles itself sell despite its shear mass. The engine’s power is surprisingly substantial throughout the rpm band where there are no apparent areas where it lacks on pulling power. With my 2014 Mazda CX-9 Grand Touring test vehicle being front wheel drive, it isn’t shy about breaking the front wheels loose on many heavy acceleration occasions. With that, there really isn’t much torque steer or loss of balance, surprisingly. 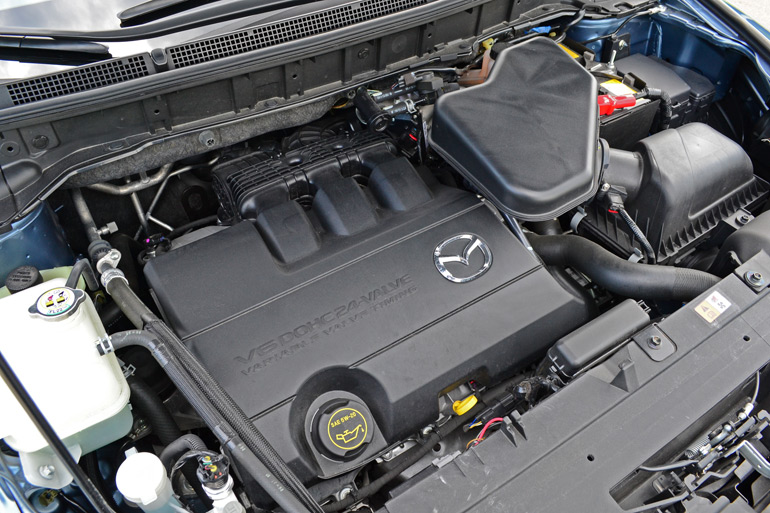 Power is directed through a 6-speed automatic transmission that shows a nice direct feel as to limit loss of power through the drivetrain. Even though the traction control is subtle about its step-in for front wheel spin, the CX-9 remains to be a well-balanced SUV, especially for its large size and long wheelbase at over 113-inches. The ride proves to be decent and it handles bumps and uneven road surfaces exceptionally. The larger 20-inch wheels and tires on my CX-9 Grand Touring trimmed test vehicle probably made the ride seem a little stiffer when pitted against the lower-trim’s (Sport or Touring) standard 18-inch wheels. Though, the ride was still smooth enough for light-hearted enthusiasts. Possibly at the cost of its lively performance, the CX-9 remains to be a bit thirsty for fuel with an EPA estimate of 17 mpg city and 24 mpg highway for my front-wheel-drive setup. Opting for the CX-9 with the available all-wheel-drive will yield even lower EPA numbers getting 16 mpg city and 22 mpg highway. I saw a city average of about 17.4 mpg and on the highway I returned about 23.8 mpg. 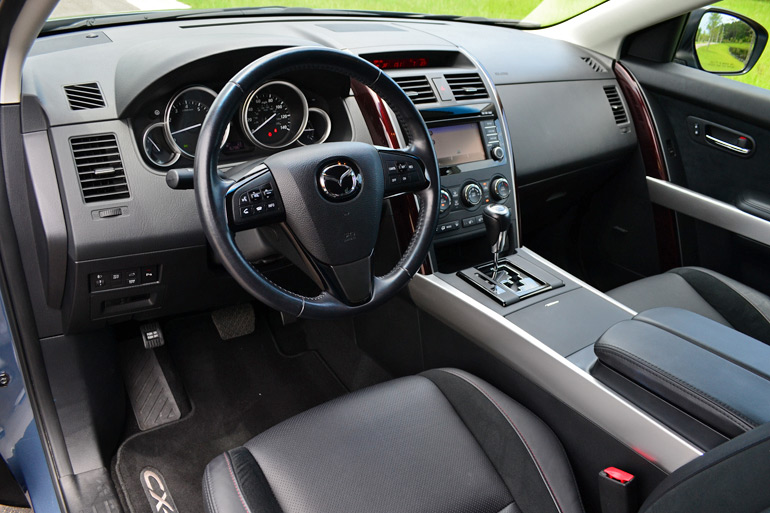 The 2014 Mazda CX-9 keeps most of what it offers at a level playing field when it comes to its interior. Nothing about the cabin really stands out, which can be a good and bad thing depending on how you look at it. The interior is somewhat boring but does prove to be rather functional in the full scheme of things for a 7-passenger vehicle. The seating up front, having somewhat of a high position, gives off the impression of you piloting a slightly-lifted truck. This can be good for those who want to feel on top of the world in a commanding position. Nevertheless, front seating can be comfy in the perforated leather seats with bolsters faintly trimmed with an Alcantara-like material. I would say the front seats match the CX-9’s sporty character just fine. The middle row seats, with a good amount of adjustability, prove to be almost as accommodating as the front. The 60/40-split of the 2nd row seats slide far forward for easy access to the 3rd row, where you find an ample amount of space for the remaining 2 seats. 2nd row passengers get their own climate controls and the easily adjusted seating is welcoming for everyone, both kids and adults. 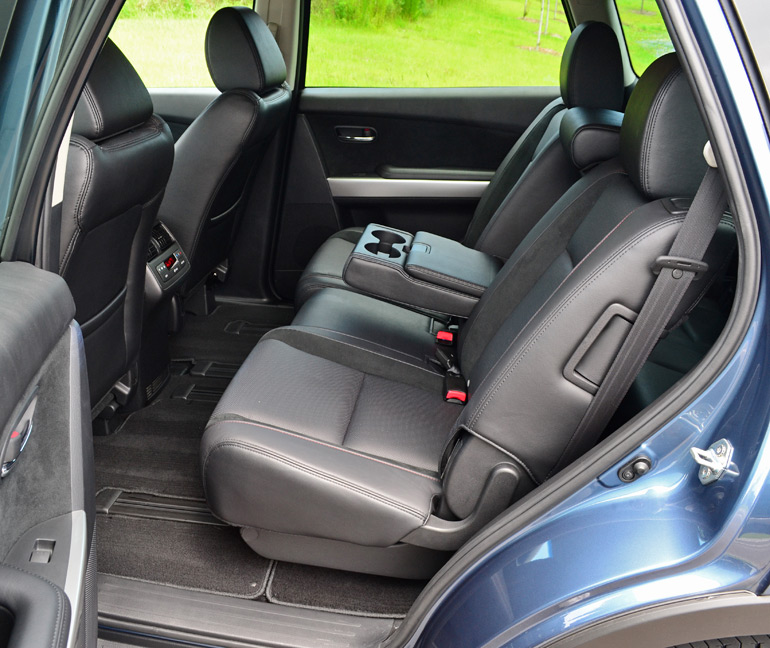 While the 2014 Mazda CX-9 Grand Touring shines in its seating accommodations, this aspect may compensate for its mismatched and rather disappointing navigation system fed through a smallish 5.8-inch color LCD touch screen. This is by far one of the worst navigation systems I have yet to encounter. The Tom-Tom interface is more of a mixed bag than providing the functionality that you want outside of entering a destination. In the CX-9’s defense, consumers would probably overlook the navigation system, as most will seek the Mazda brand for its sporty driving demeanor in a versatile 7-passenger SUV, instead of a good navigation system. The controls and feature sets in my CX-9 Grand Touring test vehicle proved to be straight forward and easy to use, in addition to the audio controls through the small color touchscreen. Also fed through the touchscreen is the standard rearview camera. Together, the parking sensors, review camera and new-for-2014 models, cross path detection, all come in handy to assist with parking due to the large size of the CX-9. 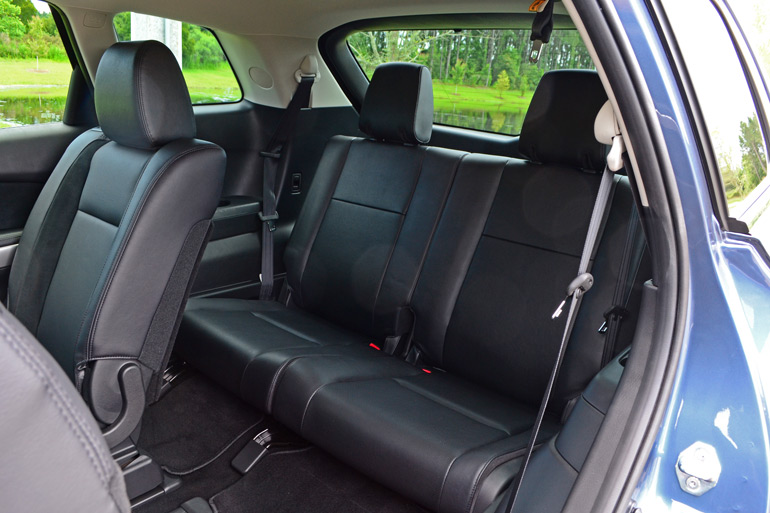 Mazda provides a compelling buy in the new 2014 CX-9 even with the top-range Grand Touring trim adding on many highly desirable features, such as the blind spot monitor, power tailgate, 2nd row climate controls, perforated leather seating, and the navigation system that proves its value only in setting an actual destination through the cumbersome interface. In all, the 2014 Mazda CX-9 Grand Touring is an exceptional value for a 7-passenger SUV that can actually fit in 7 adults comfortably. My 2014 Mazda CX-9 Grand Touring FWD test vehicle came to an as-tested price of $38,515 including a $795 delivery, processing and handling charge. The 2014 Mazda CX-9 in its base Sport trim starts at just $29,985, which is a nice starting point attributing to its versatile and accommodating factors wrapped up in the sporty crossover utility vehicle package.