It is an interesting time we live in when auto makers rarely settle on a horsepower figure upon initially announcing a new performance vehicle. That can be said about the all-new 2015 Chevrolet Corvette Z06 where folks from GM consistently announced it would have ‘at least’ 625 horsepower but no official word. Well, today the official announcement has been made, which is a welcomed surprise, that the new 2015 Corvette Z06 gets 650 horsepower and 650 lb-ft of torque from its new supercharged LT4 V8 engine. 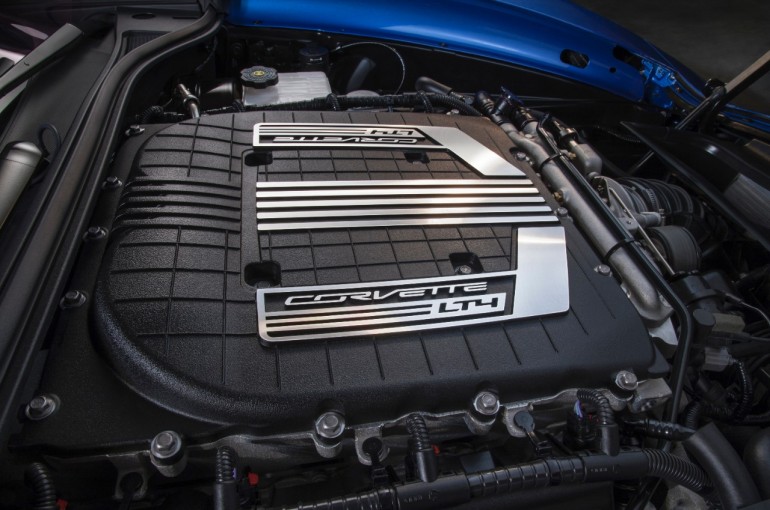 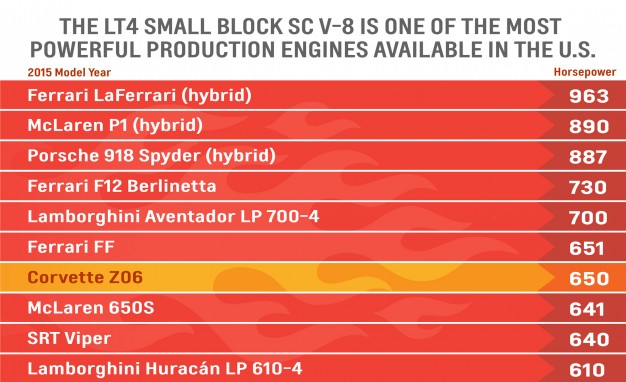 With that much power on tap, the new Corvette Z06 is among the highest horsepower for production engines available in the U.S. currently. Not to mention, with the relatively light weight body of the Z06 its power-to-weight ratio is pretty far up the automotive food chain as Chevrolet’s most powerful production car ever. What is even more amazing, as demonstrated in the power output chart below, is the Z06 brings at least 592 lb-ft of torque through a wide range from 2,500 rpm to 5,400 rpm and peaking all 650 lb-ft at 3,600 rpm. For those techies, this is simply amazing and something you don’t find in many performance vehicles. Basically, it means this engine is duking out a lot of power over a wide range, much longer than most engines you get in vehicles directly off of a production line. 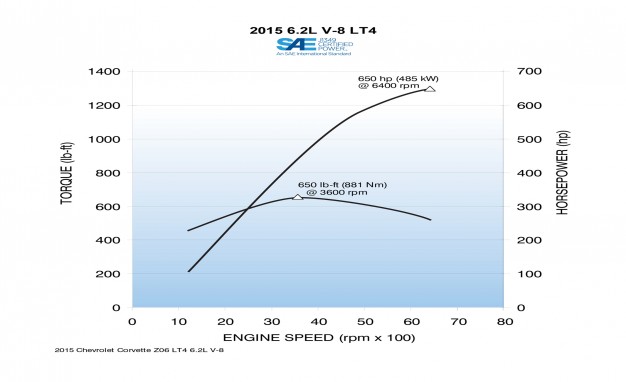 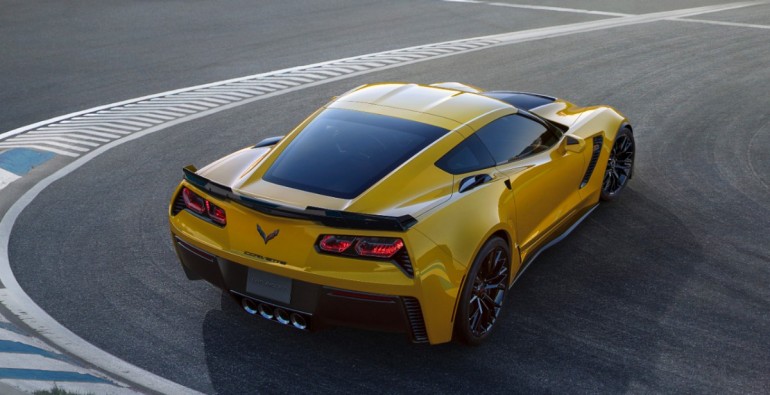 No doubt that the all-new 2015 Corvette Z06 will be fast, VERY FAST, in both its 7-speed manual and 8-speed automatic flavors.

DETROIT – The all-new 2015 Corvette Z06 is the most powerful production car ever from General Motors and one of a few production cars available in the United States that delivers more than 600 horsepower.

“The LT4 Small Block sets a new benchmark for power and torque at GM,” said Steve Kiefer, vice president, GM Powertrain Engineering. “The engine also puts the new Corvette Z06 on par with the most powerful supercars offered in America, while delivering performance with impeccable manners that make it suitable for daily driving.”

“Torque is the pulling power of an engine and the LT4’s abundance of it at every rpm in the engine’s speed range helps the 2015 Corvette Z06 accelerate quicker and respond nearly instantaneously,” said Jordan Lee, chief engineer for Small Block engines. “It’s the very definition of power on demand.”

“It’s also worth mentioning that the LT4’s supercar performance numbers are achieved with an engine that is nearly the same size as the very compact LT1 engine introduced in the 2014 Corvette Stingray,” Lee said. “The power density of the LT4 makes it one of the smallest and lightest 650-hp engines in the industry.”

The new LT4 engine is based on the same Gen 5 small block foundation as the Corvette Stingray’s LT1 6.2L naturally aspirated engine, incorporating several unique features designed to support its higher output and the greater cylinder pressures created by forced induction, including:

A new 1.7L supercharger spins at up to 20,000 rpm – 5,000 rpm more than the supercharger on the Corvette ZR1’s engine. The rotors are smaller in diameter, which contributes to their higher-rpm capability – and enables them to produce power-enhancing boost earlier in the rpm band. That boost is achieved more efficiently via a more direct discharge port that creates less turbulence, reducing heat and speeding airflow into the engine.

“The Small Block’s cam-in-block design heritage has always enabled very high performance and responsiveness in a small, compact package – an attribute amplified by the performance of our new supercharger’s design,” said Lee.

The LT4 is assembled at the new Performance Build Center at GM’s Bowling Green Assembly Plant and at GM’s Tonawanda engine plant in New York. It is matched with a standard seven-speed manual transmission or an all-new, paddle-shift eight-speed automatic transmission built in Toledo, Ohio.

Designed to deliver shift responses on par with the world’s best dual-clutch transmissions, it is the first automatic offered in a Z06. It also makes the Z06 one of the few cars this powerful to offer the choice of a conventional manual transmission or an eight-speed automatic.

Founded in 1911 in Detroit, Chevrolet is now one of the world’s largest car brands, doing business in more than 140 countries and selling more than 4.9 million cars and trucks a year. Chevrolet provides customers with fuel-efficient vehicles that feature spirited performance, expressive design, and high quality. More information on Chevrolet models can be found at www.chevrolet.com.