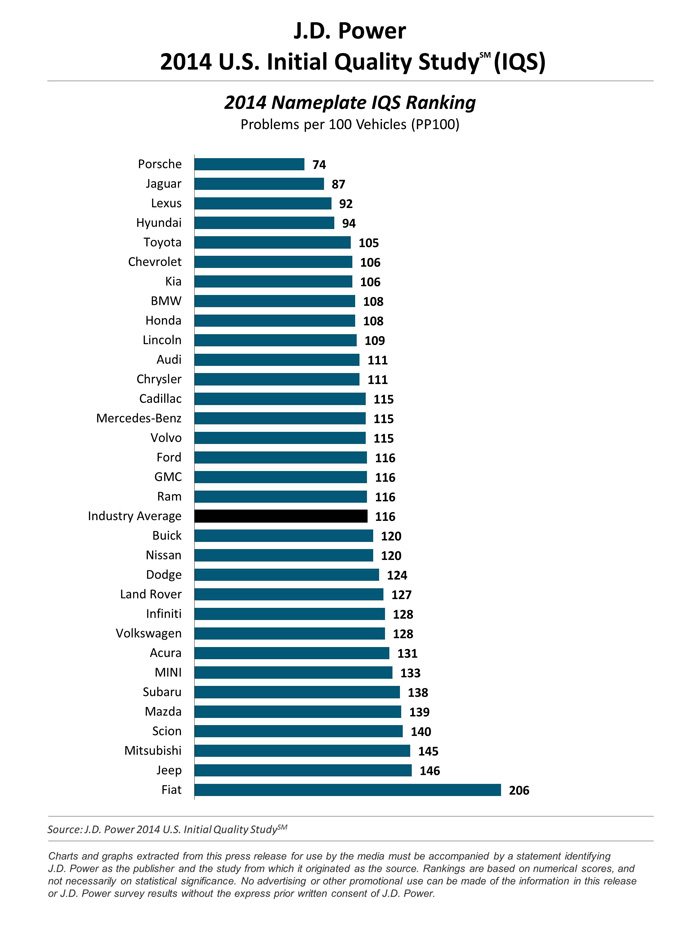 , they also release an Initial Quality Study (IQS) primarily based off of problems per 100 vehicles reported by new vehicle owners. As the study’s name indicates, this is an initial quality study finding overall initial issues when the vehicle is new.

Porsche, Jaguar and Lexus top the list of this year’s IQS while GM vehicles topped six segments for highest ranking with Hyundai taking three top slots. An over-all 3 percent increase of problems is observed over 2013’s study. Hit up the full press release for detailed information and view the exclusive charts below for a full rundown of each manufacturer. 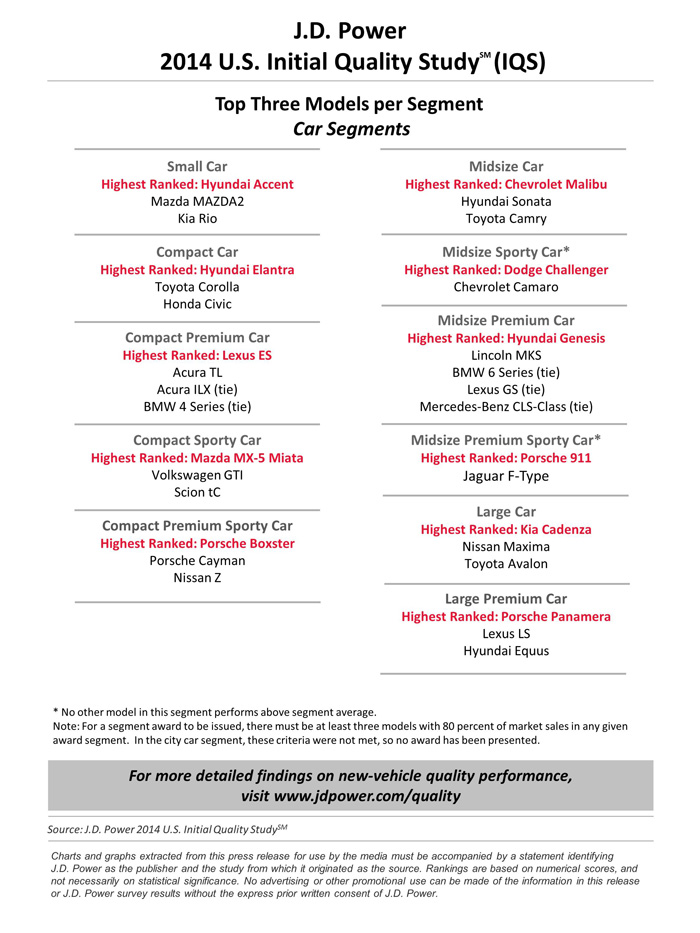 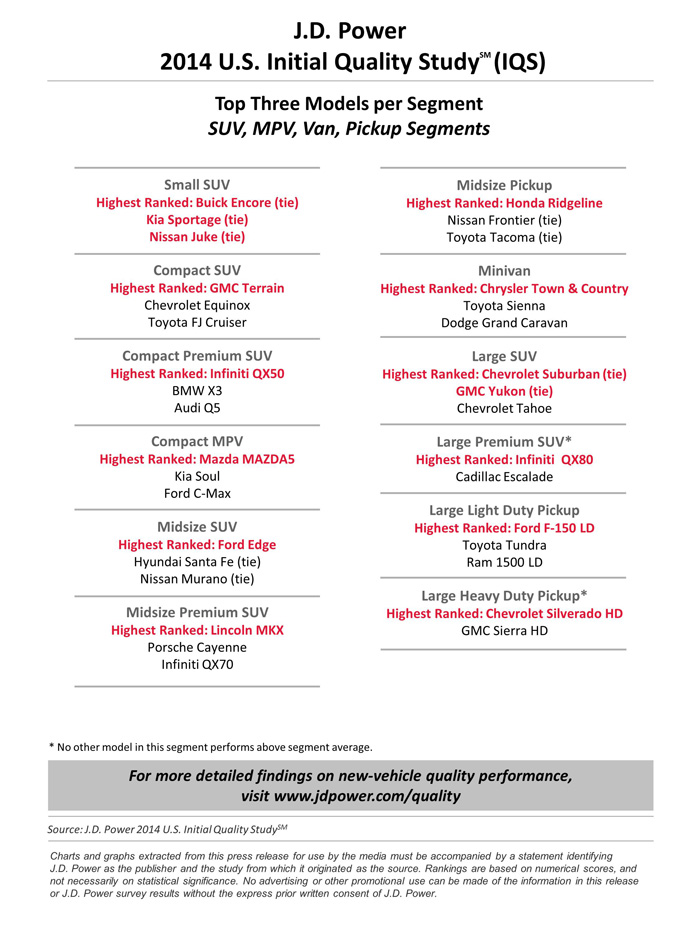 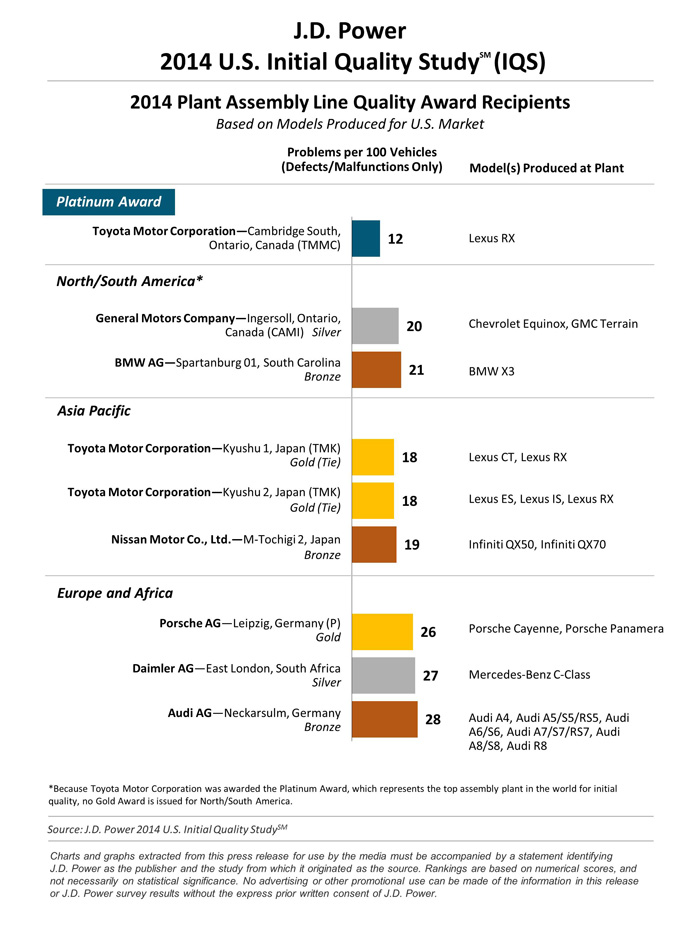 WESTLAKE VILLAGE, Calif.: Wednesday, June 18, 2014 — The number of problems experienced by new-vehicle owners has increased from the previous year, as automakers continued to be challenged when introducing sophisticated technologies in new vehicles, according to the J.D. Power 2014 U.S. Initial Quality StudySM (IQS) released today.

The study finds that overall initial quality averages 116 PP100, a 3 percent increase in problems from 113 PP100 in 2013. This year’s increase in problems follows a similar increase found in the J.D. Power U.S. 2014 Vehicle Dependability StudySM (VDS) released in February, which measures problems experienced after three years of ownership.

Some Consumers Struggle with New Technology

The study identifies two primary causes of the increased problem levels in 2014. First, newly launched vehicles (those that are completely new to the market or have undergone major redesigns) continue to be more problematic than carryover vehicles (those that did not undergo any significant changes). On average, newly launched vehicles experience 128 PP100, compared with 113 PP100 for carryover vehicles. The increase in problems among all-new vehicles is found mainly in the areas of voice recognition, Bluetooth pairing and audio systems.

“Automakers are trying to give consumers the new features and technology they want without introducing additional quality problems into their vehicles,” said David Sargent, vice president of global automotive at J.D. Power. “However, almost all automakers are struggling to do this flawlessly with some consumers indicating that the technology is hard to understand, difficult to use, or simply does not always work as designed.”

Some regions experienced increases in problem types associated with harsh weather. Consumers in the South and West regions of the country report the same level of problems as in 2013 (114 PP100). In contrast, consumers in the Northeast and Midwest regions report 117 PP100 in 2014, compared with 112 PP100 in 2013. Most of this increase is found in the heating/ventilation/air conditioning, exterior and engine/transmission categories, three areas in which harsh weather conditions have an adverse effect on vehicles.

“Automakers test vehicles in extreme conditions to ensure they function properly,” said Sargent. “However, it is impossible to completely negate the effects of severe weather. Heating and ventilation systems have more work to do, engines and transmissions aren’t as smooth when cold, and exterior moldings and paint all take some punishment. Consumers generally understand this but still report problems when their vehicle does not wholly live up to their expectations.”

“Even problems experienced in the first 90 days correlate strongly with ultimate repurchase behavior,” said Sargent. “These early problems can set the tone for the entire ownership period and still have an effect years later when consumers replace their vehicle.”

In the Europe and Africa region, Porsche AG receives the Gold Plant Quality Award for its Leipzig, Germany (P), plant, which produces the Porsche Cayenne and Panamera.

The 2014 U.S. Initial Quality Study is based on responses from more than 86,000 purchasers and lessees of new 2014 model-year vehicles surveyed after 90 days of ownership. The study is based on a 233-question battery designed to provide manufacturers with information to facilitate the identification of problems and drive product improvement. The study was fielded between February and May 2014.