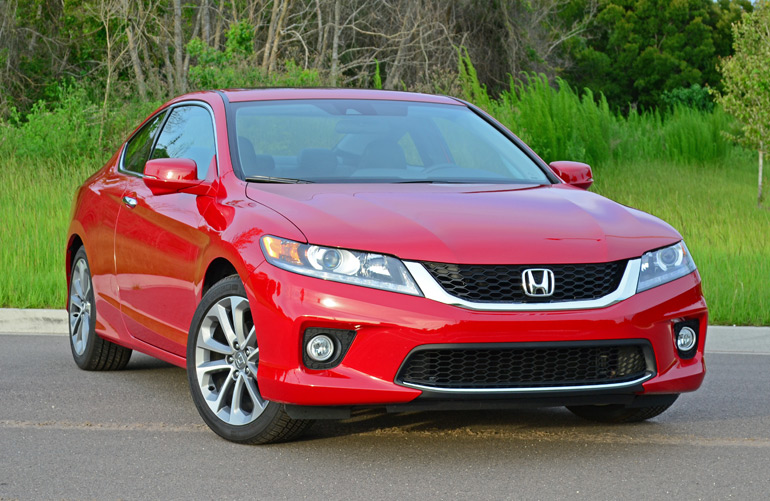 The new 2014 Honda Accord Coupe takes a different approach from its Sedan sibling with 2-less doors and a prided mild-mannered sports coupe appeal. Equipped with Honda’s 3.5-liter V6 engine producing 276 horsepower and 252 ft-lbs of torque it can be had with a 6-speed manual or 6-speed automatic. In the quant midsized coupe segment, the new Honda Accord Coupe stands mostly alone not having a competitive counterpart in the mix as the Nissan Altima Coupe is no more and Toyota doesn’t have a two-door participant from its Camry platform. As the Honda Accord Coupe musters onward through a lonely path, it shines in the commonplace aspects of what a mainstream midsized coupe is expected to do. 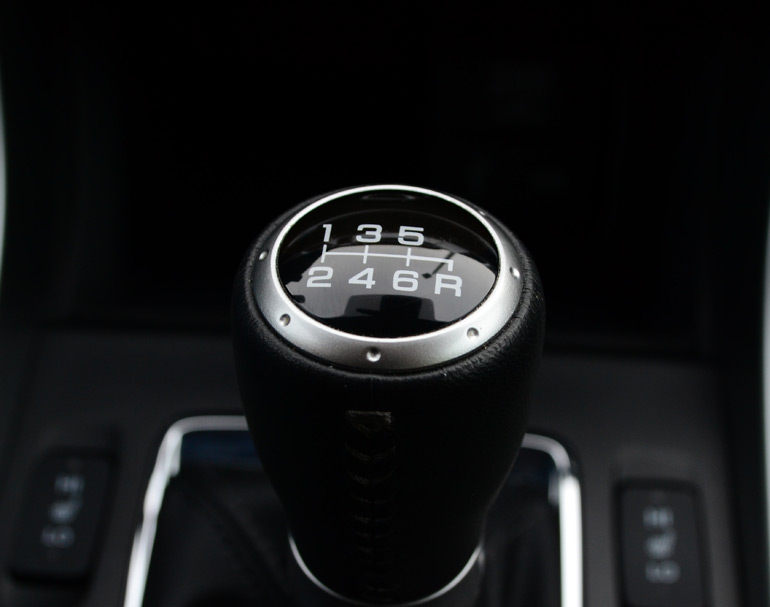 Having the choice of a 6-speed automatic transmission or 6-speed manual box mated to the substantial V6 engine, the Honda Accord Coupe retains its attractiveness among those who want to have a taste of victory on the path of least resistance. That path, foreshadowed by all sorts of luxury-laced sports coupes and high-priced sports cars, has the Honda Accord Coupe deeply imbedded in the hearts of conventional Americans who may have once had an enthusiast capacity. 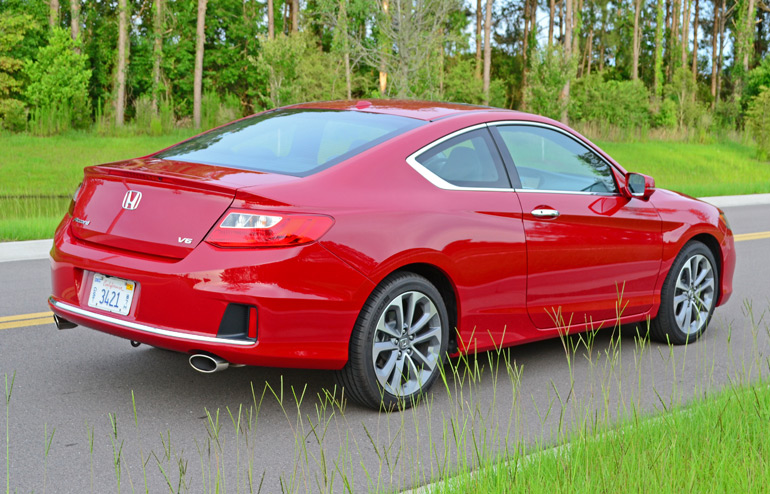 Taking away from the enthusiast mindedness is the 2014 Honda Accord Coupe V6’s lack of confidence in its lateral handling abilities. The Accord Coupe V6 is excellent in a straight line, almost to the point where the V6 engine seems to rip the chassis apart. It is until you take a few twisty turns at speed where the Accord Coupe V6 gives you several hints at it being far from a sports car. Dropping the early-engaging clutch out of each gear of my 6-speed manual gearbox-equipped Accord Coupe keeps you entertained, as well as the guessing game of how much grip will the front wheels have today? The torque and followed-through power of the V6 is almost too much for the Accord Coupe’s balance, even with the weight bias being in the front. You get a considerable amount of body roll at times when pushing the Accord Coupe. However, it still rides on that fine line of being a vehicle for the light-hearted enthusiast versus someone who just wants a spectacular appliance to get them from point A to point B. 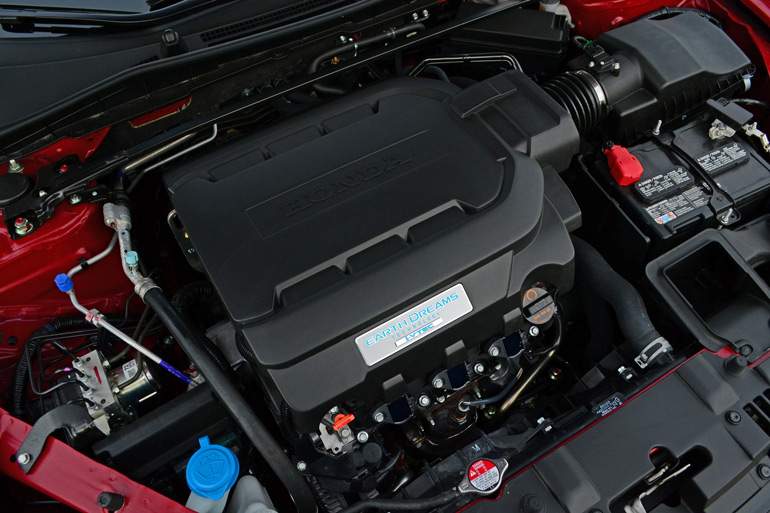 Despite the 2014 Honda Accord V6 6-speed manual’s handling shortcomings, it proves to be a valid attempt at proving there is still a bit of enthusiasm in the brand even when it comes to its top-selling and highly-praised-by-common-folk midsized vehicle. Possibly taking the commonality of the Accord and putting it in a long overdrive gear, is what the new Honda Accord can be summed up as. Additionally, it only takes about 6 seconds flat to reach 60 mph in the Accord Coupe V6. You can even shred the low-rolling-resistance 18-inch Michelin Primacy front tires up in large plumes of smoke if you so choose to – part of the exciting stuff packed in an unassuming package. 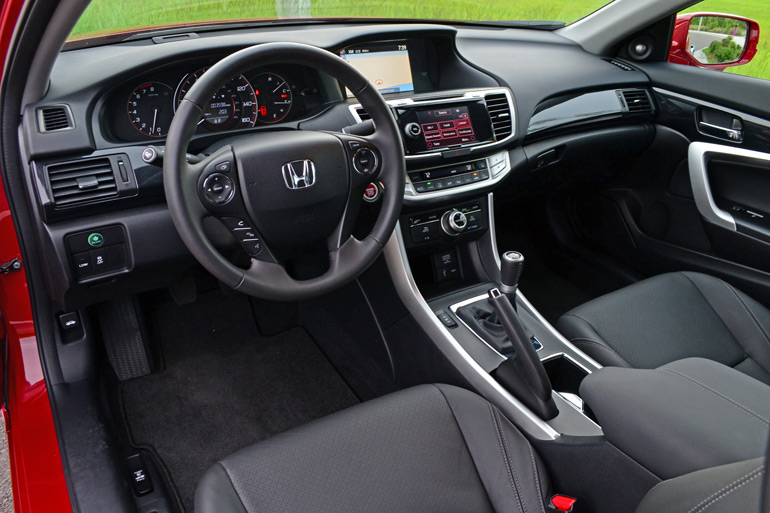 On the inside of the new 2014 Honda Accord Coupe V6 the interior remains a constant familiarity from the rest of the Accord lineup. Many of the controls are straight forward and easy to find and use. With my Accord Coupe V6 in the EX-L trim with Navigation, the interior exudes a bit of luxury in the over-all perception of the dashboard. The large color LCD screen used for displaying the navigation maps, settings, climate control readouts, audio system readout, vehicle information and phone connectivity. The well-synced and easy-to-use unit is borrowed from the Acura lineup, which is actually a good thing. The use of the secondary red-tinted touch screen integrates controls of the audio system with a minimalistic but engaging approach for the driver and passenger. The dashboard controls below the dual-zone climate controls is also a familiar trait to Acura vehicles with navigation, which feels right at home in the Honda Accord. Much of the use of those controls has a slight mental separation but can be easily figured out after giving it a good 5 minutes of trial and error. 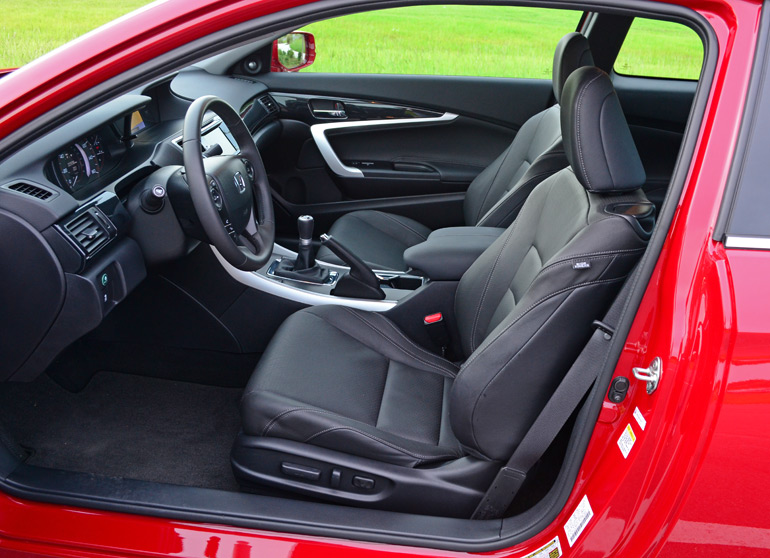 The seating positions up front come with a lot of adjustability whereas the driver’s seat takes a good while to find a proper driving position. At times the seating position feels a bit out of place due to the rather wide range of adjustability, mostly in the height of the power driver’s seat. The takeaway from this is that the Accord Coupe is friendly to virtually any sized adult. Probably something football players could take a liking to for the extra adjustability. The passenger seat, initially, is more ideally positioned with its manual control. The rear seating of the Honda Accord Coupe departs far from its Sedan sibling with a space that is mostly cut short and can be a hassle for those with long legs. Most of the space is usable for adults, but most of the legroom is solely ridding on the positioning of the front seats where space can be plentiful or mostly diminished all dependent on your front passenger’s “adjustment” situation. Cargo space, at 13.4 cubic feet, is only a couple inches short of the Sedans 15.8 cubic feet, as it is expected to be. The one-piece folding seat back folds down to open up cargo additional space and an added versatility to the Accord Coupe. It all comes together well considering its initial expectations of being cramped, which it is not. 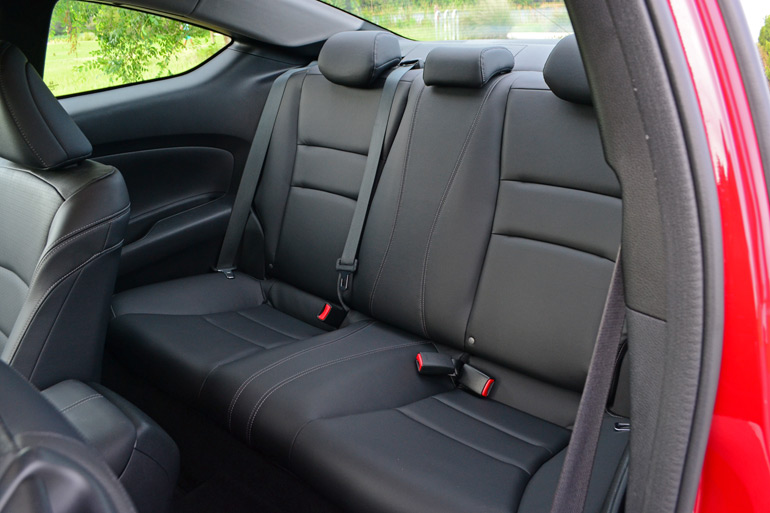 On the road the 2014 Honda Accord Coupe V6 has a firm ride at times but comes about as deceptive when really pushed near its lateral limits, as explained previously. Though, in confides of the Accord Coupe being a midsized 2-door without leading you on into the sports car category, it can be a civil vehicle on the road when driven within legal limits. The economical side of the Honda Accord Coupe really shined bright with the 4-cylinder engine variation. With my Accord Coupe V6, fuel consumption diminishes to an EPA estimated 18 mph city and 28 mpg highway. That is a vast departure from the 4-cylinder engine trim mated to a CVT transmission getting 26 mpg city and 34 mpg highway. Nevertheless, fuel economy I observed was consistent getting dead-on for the EPA estimates for both city and highway driving. I would have to say, the V6 with a 6-speed manual transmission, even with the diminished fuel consumption figures, is the attractive choice for those with the slight enthusiastic disposition – it just makes sense in my world. 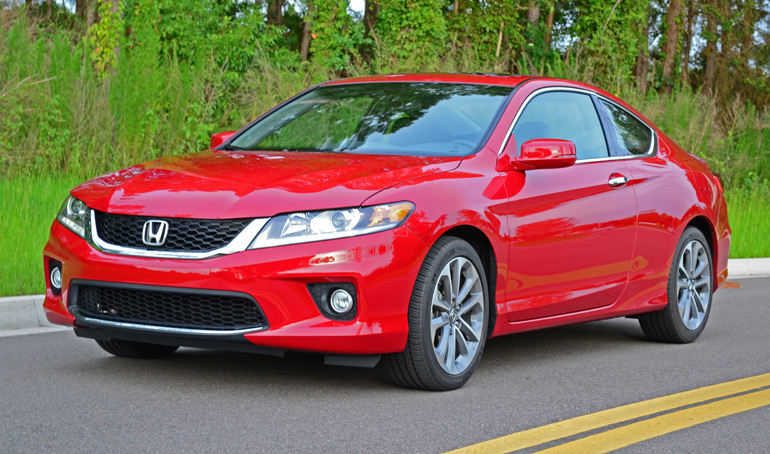 As far as value goes, the Honda Accord remains on the top selling list for valid many reasons, and price is a major driving factor. With my Honda Accord V6 test vehicle being fully optioned out with its EX-L w/Navigation top-level trim, the pricing hits the upper echelon of the Accord’s scale at an as-tested $33,190. Mind you, the starting price of the Honda Accord Coupe LX-S 4-cylinder manual is just above $24,000, as is the Accord Sedan in its base 4-cylinder trim. Altogether, the new 2014 Honda Accord Coupe with the V6 and manual transmission doesn’t ever beg to be something more than it is. It is priced right, gives you just enough excitement for the lighthearted enthusiast, and reiterates its attractiveness and dependability in being one of the top selling midsized vehicles on the planet. The Accord Coupe is just a bonus having just two doors to provide that rare alternative to its Sedan counterpart, something desired by many.