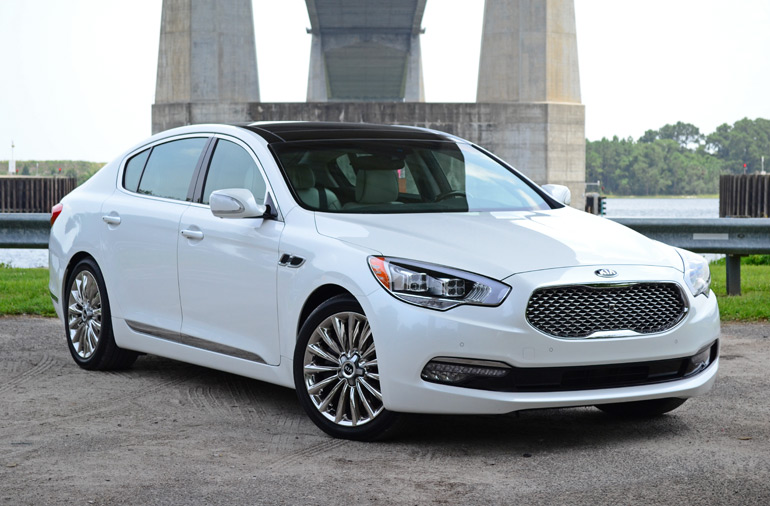 For decades, vehicles like the Mercedes-Benz S Class, BMW 7 Series, Audi A8 and even the Lexus LS, have all catered to the masses as the definition of a full-size luxury car that delights the appetite for those who seek the finer things in life. Today, many automakers are taking a valid stab with their own descriptive language to essentially replicate the luxury we are accustomed to. One automaker at the forefront of adding their own terms of full-size luxury is Kia with the all-new 2015 K900. 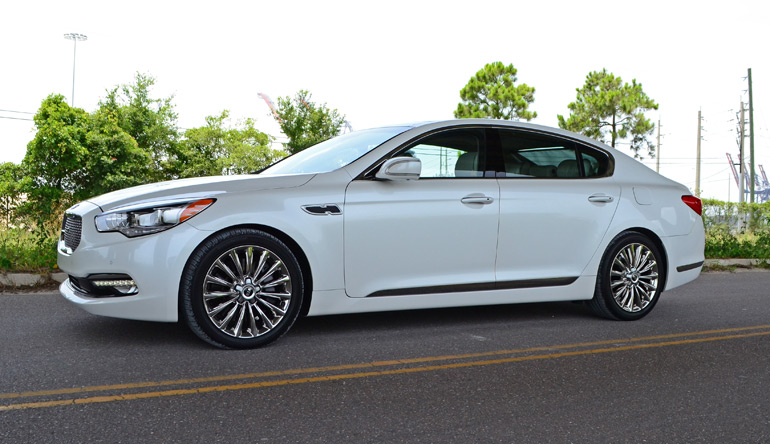 The new 2015 Kia K900 has some major hurdles to jump over in terms of its signification in the American luxury world. Before outlining many of the K900’s astonishing luxury qualities, it is safe to note the obvious elephant in the room is the Kia badge proudly worn on the dazzling exterior. It is also prudent to mention that the Kia K900 has been around since 2012 as Kia’s flagship vehicle in Korea dubbed the K9 (yeah, that name wouldn’t work here in America) and then named the Quoris in a select few international markets. 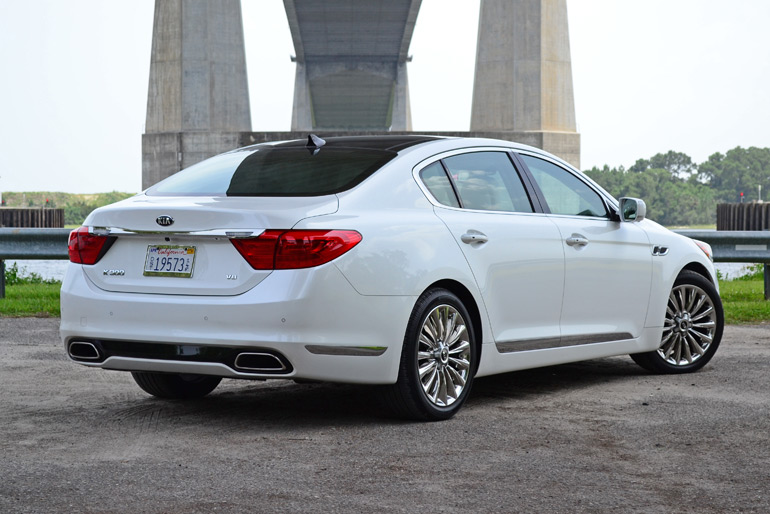 Borrowing its platform from the Hyundai Equus, the new Kia K900 is sought out to be a worthy contender in the full-size luxury sedan market. In all reality, I never thought there would be a day when I could get away with mentioning the term “full-size luxury” and the Kia nameplate in the same sentence and actually get away with it. In getting away with it, after spending a week with the 2015 Kia K900, I am pleasantly surprised and in awe of it living up to the standards you expect from its German and Japanese competition. Even so, the new Kia K900, equipped with its single-package-option VIP Package, you get to match the competition with power-reclining rear seats, power rear privacy sunshade with manual side window shades, ventilated and heated rear outboard seats with lumbar, advanced smart cruise control (ASCC), advanced vehicle safety management (AVSM – incorporates auto emergency braking), color heads-up display, power door latch system (auto-latches doors that were not completely latched upon closing), surround view monitor (a series of cameras to simulate imagery around the vehicle in full 360 degrees for parking or maneuvering around objects w/ multiple angle settings – in place of a standard review backup camera), and a configurable 12.3-inch color LCD instrument cluster screen. 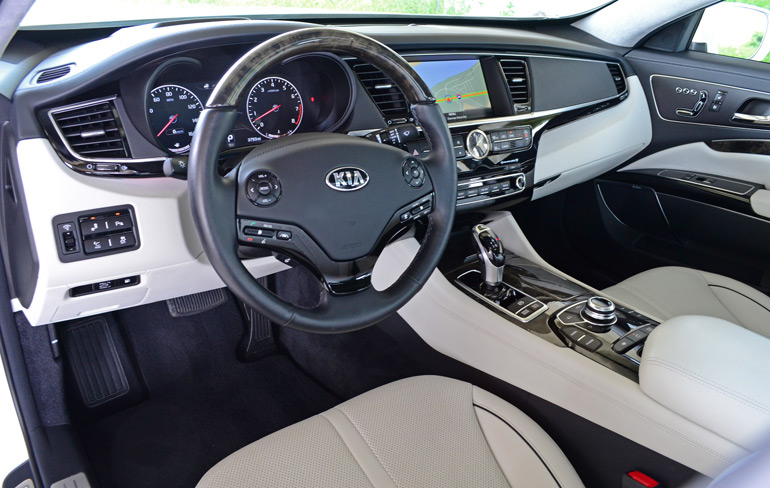 Inside of the Kia K900 is a lavish cabin and technology that wants to be user-friendly but will only satisfy after prolonged practice when it comes to its infotainment system. Use of the central control dial for the infotainment system along with its function buttons seemed to have its own learning curve that took a while to get acclimated to. Much like Audi’s MMI system, the Kia K900 forced me to look down at the controls often in relation to what was appearing on the 9.2-inch LCD center display. This is where a touch-screen would have been beneficial, as it is in other Kia vehicles. On the other hand, the lack of touchscreen interaction is a quality found in most of the K900’s direct competition, possibly to make the transition of consumers in such a demographic easy. Nevertheless, the system all together proved to be easy enough as to not take away from your attention on the road to the point of plowing into the car in front of you. Of course, at that point and time the auto-braking system in the case that the radar senses a vehicle approaching too fast will react to help bring the K900 to a stop. I didn’t test that feature, for obvious reasons. 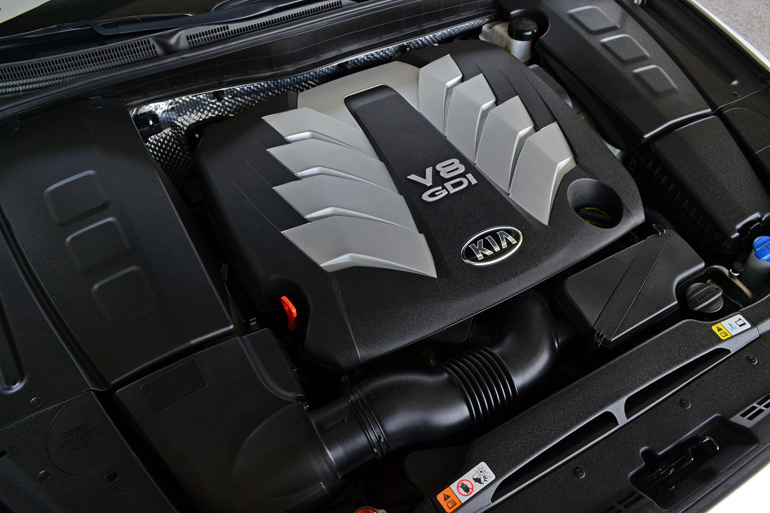 For the American market, the 2015 Kia K900 gets the 5.0-liter V8 direct-injection engine with 420 horsepower and 376 lb-ft of torque mated to an 8-speed automatic transmission as the top-level V8 trim engine choice. A 3.8-liter V6 engine with 311 horsepower and 295 lb-ft of torque gets the job done for the base V6 model with slightly better fuel economy numbers (18 mpg city/27 mpg highway). The V8 engine in my test vehicle provides a substantial amount of power through the rear wheels and the transmission consistently keeps things progressive without any noticeable delays in shifting up or down. Ride quality and handling have a nice balance but more on the soft and supple side as the conventional springs and amplitude-selective Sachs shocks do a decent job keeping the body motion in check. Though, the K900 does get a bit lofty on rolling roads and big dips, potentially an area where an adaptive damper setup may have helped reduced the bounce. Areas such as the suspension, swaying way from an air or fully adaptive setup, are evident of the cost savings in the K900 and one of a few shortcomings against its competition. Still, the Kia K900 is buttery smooth and absorbs bumps and pavement imperfections like an infinitely hollow sponge. The only time where the K900 shows its heft is when you push it to into turns at endearing speeds, something that most drivers will probably never do unless in an emergency situation. The 4,555 pound curb weight comes into play at those times and can be an enlightened situation where the driver is at the mercy of stability control, yet it does remain well-planted on the road with the ability to push 0.84 g on the skid pad. 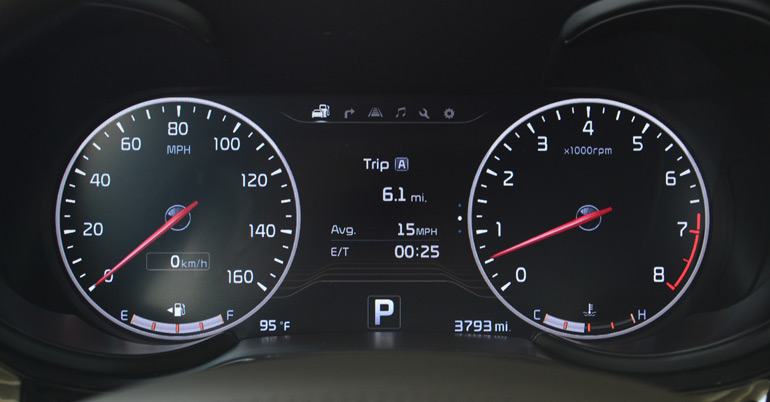 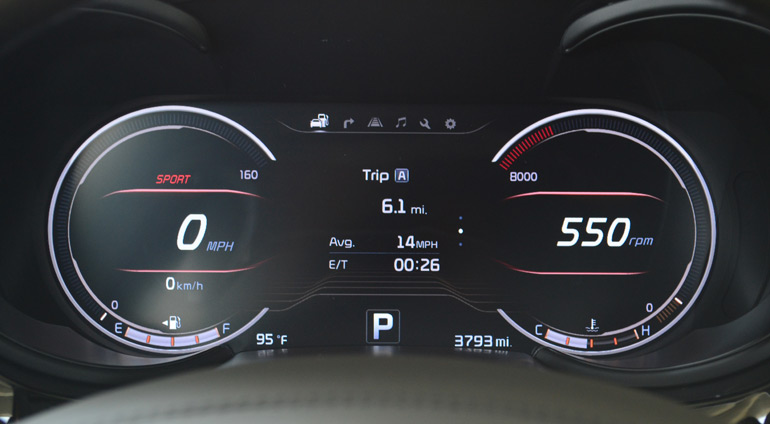 Dialing in one of the three driving modes, Eco, Normal or Sport, changes the throttle positioning, steering effort and transmission shift points. Use of the Sport mode will change up the 12.3-inch instrument cluster to read-out a large digital speedometer and rpm gauge with backwards-sweeping dials. Sport mode is desirable but the transmission never utilizes 8th gear even when cruising at highway speeds, potentially using up your tank of regular gasoline a bit faster than you would like just for a sportier driving quality from the drivetrain. 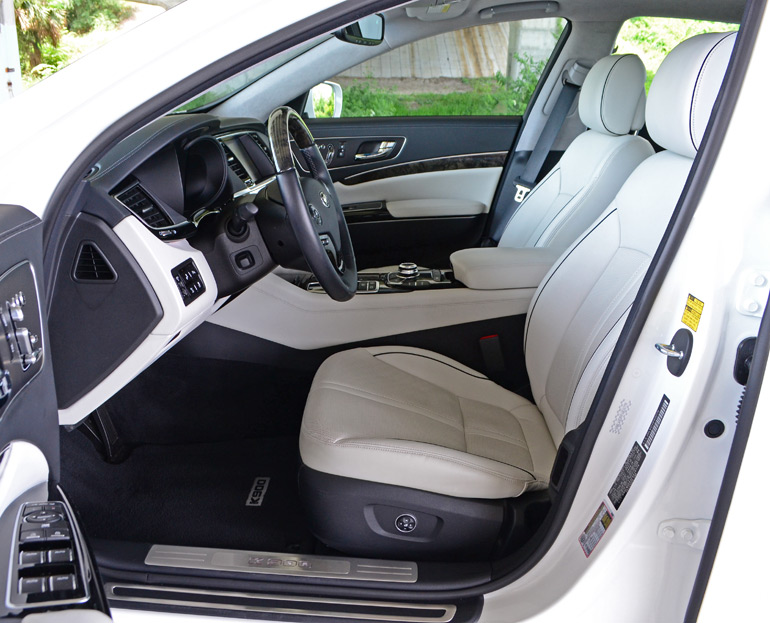 As a full-size luxury sedan, the Kia K900 exudes every expectant level of luxury, especially in the full price scope starting just a hair over $60K. The interior is among the quietest in the industry and it was evident during my interstate travels in the K900. Wind noise was almost completely absent as was engine buzz, which was only noticeable under moderate to full throttle. Actually something easily drowned out by the remarkable audio system. The dominating noise, remained to be its 245/45R19 Hankook Optimo H426 tires up front and 275/40R19 in the rear, which still proved to be reserved in emitting unwanted road noise into the cabin. The beefy 19-inch tires with the help of the smooth but relatively quick-shifting 8-speed automatic transmission, allow the 5.0-liter V8 to get its power down to the ground for a run to 60 mph in just 5.5 seconds. This performance yields an EPA estimated 15 mpg in the city and 23 mpg on the highway. My highway excursions returned a nice 24.2 mpg, while around town, using the smart cruise control in heavy traffic to completely bring the vehicle to a stop and resume driving once traffic lifted, I saw an average of about 17.4 mpg. 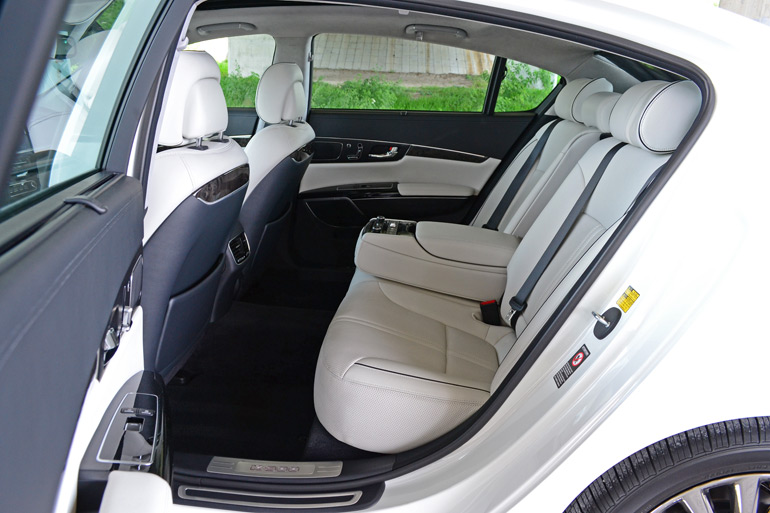 The 2015 Kia K900 is far from a dolled up Cadenza or Kia’s best effort at copying another full-sized luxury sedan. In a way, Kia has done their homework to make you think that they studied every full-sized luxury sedan on the market and started to add their own little touch to each of its best parts. Basically, many traits of the K900 seem to be a page or two directly out of the books of Audi, Benz, Lexus and BMW. Those qualities, many of them replicated with a little twist, find their way into the K900 but are well accepted by critics like me. I found things like the gear shifter to be a page out of BMWs book, the framed rear-end design from Lexus, the central dial and infotainment control is very Audi MMI-esq, and the adaptive LED headlights with a full array of exterior and interior LED lights sums up the luxury appeal everyone else has adopted. The summation of these parts and design come together in a delectable fashion. With Kia taking the extra step to avoid leaving any large stones unturned, the K900 is just about on par for what you get from Benz, Lexus and BMW -sans the prestige from those brands that everyone will balk about when they point to the badge residing on the hood and rear power opening and closing trunk lid. 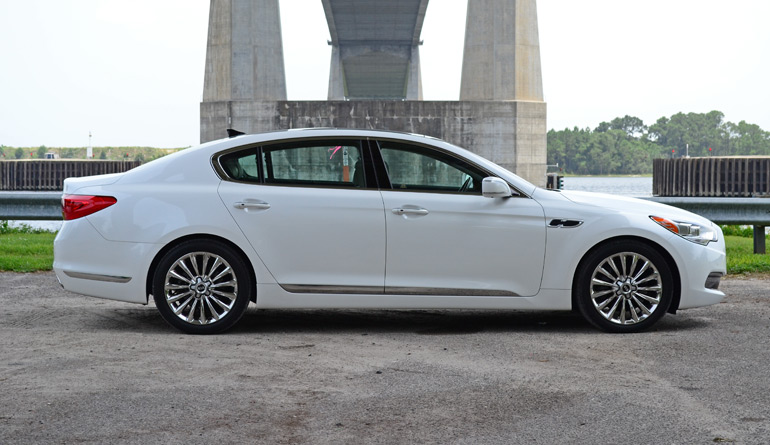 I would not go as far as to say the Kia K900 is a copy of its competition. For one, there are many other reasons to signify it being a level playing field with the big luxury dogs. It has its own style and a comportment that goes a long way when you consider its bottom line pricing scale. Looks alone shows a substantial presence from its long wheelbase and tech-esq LED lights up front down to its massively-sized dark panoramic glass roof and stunning LED tail lights with a futuristic-looking outlined accent. In taking any shortcuts or denying the true lap of luxury, Kia stayed away from that simple approach. Instead, the Kia K900 appears to have utilized lesser-costing components for the same outcome, but they all work in synch to pull off something that has never been done before from a vehicle wearing a KIA badge. You get all of the tech goodies, the supple ride quality, a majestic outwardly appeal, decent performance, and quality perception in materials even if it uses some soft-touch and piano-black plastics in the mix of leather wrappings and padded dashboard trim pieces. Possibly, it is the Kia badges that bring the price down to a reasonable earthly perspective and could ruin the perceptions of the stubborn. In all seriousness, with the 2015 Kia K900 loaded up with its VIP Package as in my test vehicle, the as-tested price of $66,400 may be high for a Kia, but for a well-appointed true full-sized luxury sedan that doesn’t disappoint the least bit, it is undoubtedly a substantial value. Configuring a BMW 750i with comparable equipment you will be expected to pay just above $95,000. If you must ask, yes, this is a Kia, but it is also a real luxury car. The only thing that full-size luxury sedan seekers have to overlook is that overhanging stigmata of the Kia badge. Otherwise, the K900 is a winner in my book.