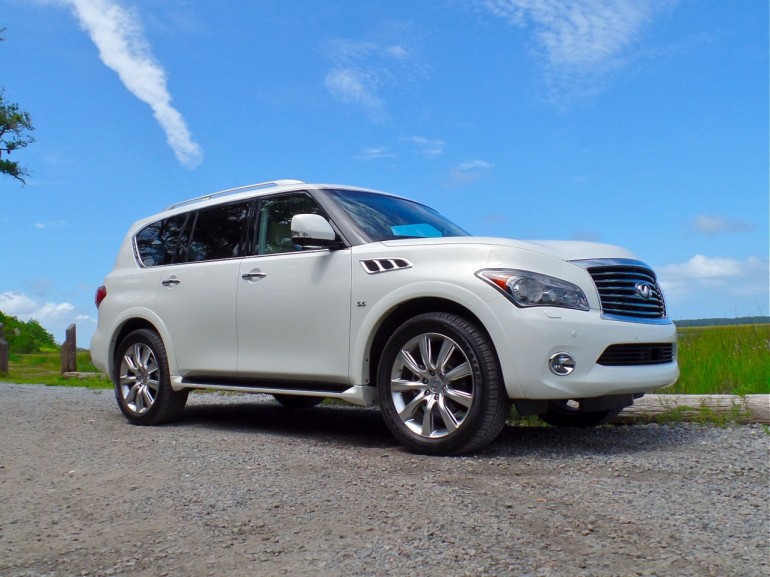 Technology moves fast. The tiny iPhone I carry around in my pocket is capable of feats that rival the science fiction movies of my childhood. I am old enough to remember high school typing class, correction fluid and all. My MacBook Pro has already saved a back-up copy of this article to an external drive, allowing me to forgo the potential heartache of having to recreate my opening sentence – if you’ve ever written an article the first sentence is always the toughest, it’s almost like the blank screen is mocking you. 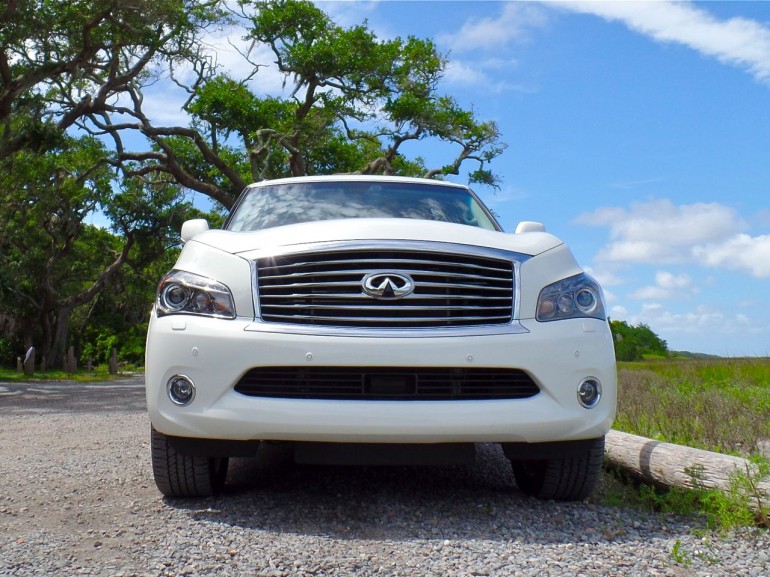 Few places have seen the incredible impact of technology like today’s automobiles. The core technologies remain relatively the same, for instance, the internal combustion engine has been powering cars for over 100 years, but computers and computer driven manufacturing have revolutionized every facet of automobile design and production. 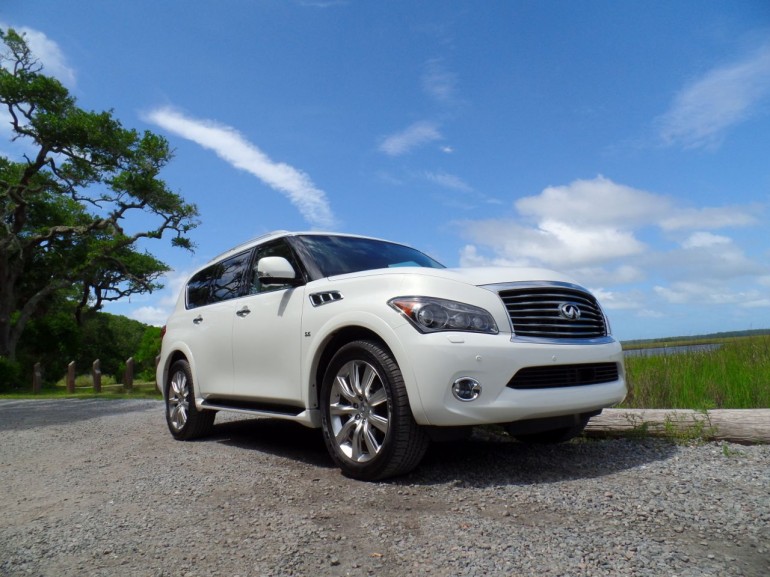 This past week I was able to get behind the wheel of Infiniti’s flagship SUV, the ultra luxurious and innovative technology-laden 400 horsepower seven passenger 2014 QX80 AWD.  Yes that title is a mouthful, but it is fitting, the QX80 is massive, extremely capable, and loaded – with everything. From the outrageously comfortable climate-controlled leather front seats and real mocha burl trim to the 15 speaker Bose cabin surround digital 5.1 system and 60/40-split folding and reclining third row, the interior is more of what you would expect to find in a luxury yacht than a rugged all wheel drive SUV. However, while the ample power and creature comforts initially won my heart, it was the state of the art technology that stole the show. 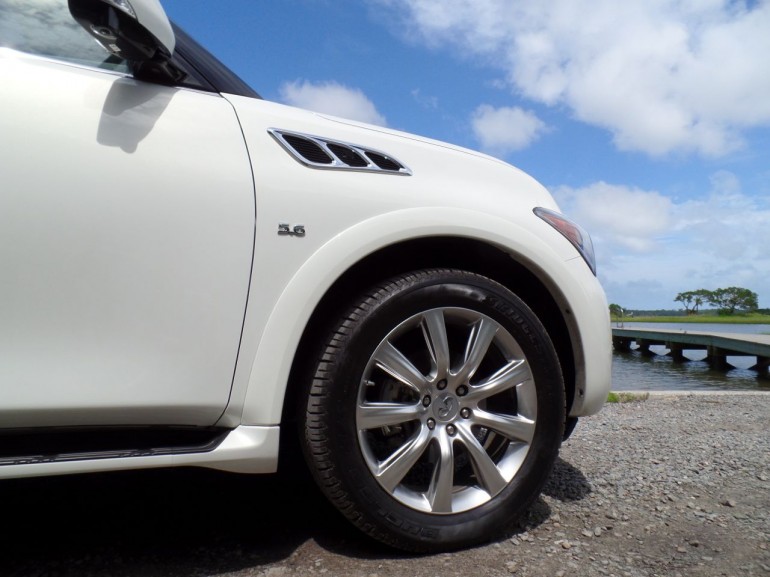 My 2014 Infiniti QX80 came equipped with the optional $3,250 technology package, an affordable upgrade considering the six safety and convenience items transform the vehicle into something from a science fiction movie from a decade or two ago. Infiniti certainly isn’t the only manufacturer offering many of these features, the driving assist tech in the Mercedes-Benz line for instance is often referred to as the benchmark, and many more traditionally affordable marquees, such as Subaru, Toyota, Mazda and Ford are also strong in the game. 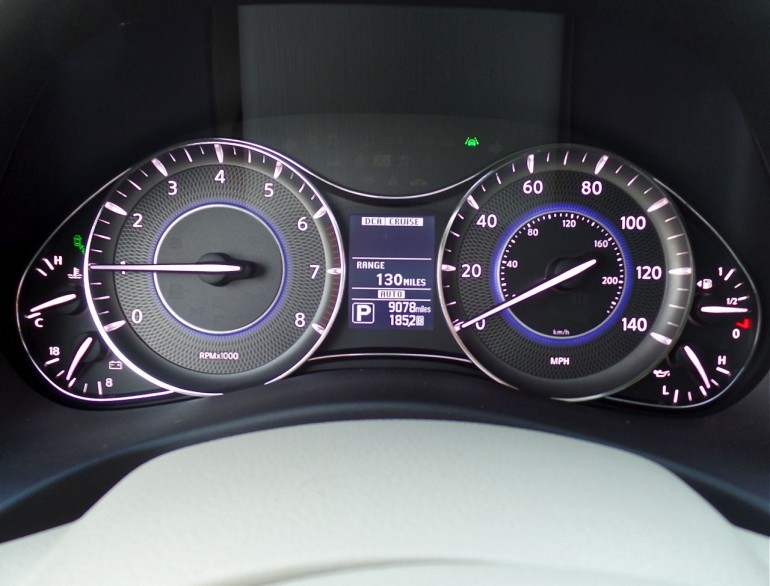 There is an argument that many of the new features disconnect the driver from the road and I have heard car enthusiasts mumble that the term “assist” could be translated as “nag.” Full disclosure: I was in that camp myself before spending a week with the Infiniti.

In a perfect world, we would not need backup collision warning and backup collision intervention systems, but in Jacksonville they come in very handy. Much like having three passengers who continually scan the horizon while you are backing out of a parking space, the Infiniti alarms you when something or someone is in your path, emitting an audible warning and automatically engaging the brakes. In a vehicle as large as the 208.3-inch long, 79.9-inch wide and 75.8-inch tall QX80, the extra help is appreciated. Together with the standard equipment 360 degree, around view monitor system with moving object detection and front and rear sonar system, it is almost impossible to inadvertently run over the neighbors trash can, and if you are actually trying to run it over, it will be really hard to miss. 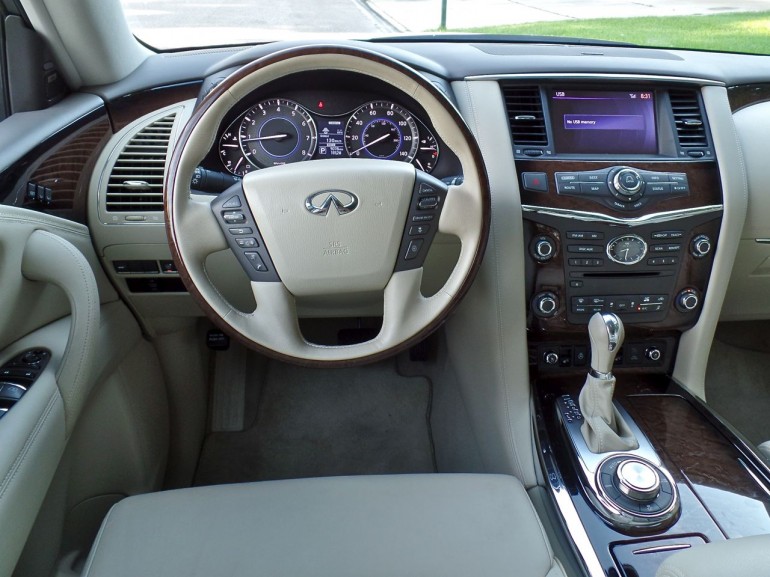 Anyone who has spent time on the highway knows the danger of “blind spots.” Some cars offer greater visibility than others, but every vehicle on the road has an approaching-traffic-Bermuda-Triangle located just behind the driver on either side of the car. Many newer vehicles come equipped with small blind spot mirrors, a section of the glass that provides visual coverage of the area that is largely lost in the traditional side-view, but the Infiniti goes one step further by provided an automated system that watches for vehicles in the blind spot and warning you through a series of lights and beeps. If the driver attempts to pull into a lane already occupied by another vehicle the SUV will actively assist the QX80 back towards the travel lane. Thankfully, not everyone has been in a blind spot collision, but I am sure we have all had a “close call” at one time. The latest blind spot intervention technology frees the driver of that worry, eliminating the need to careen your neck 180 degrees, momentarily forcing your eyes off the road. 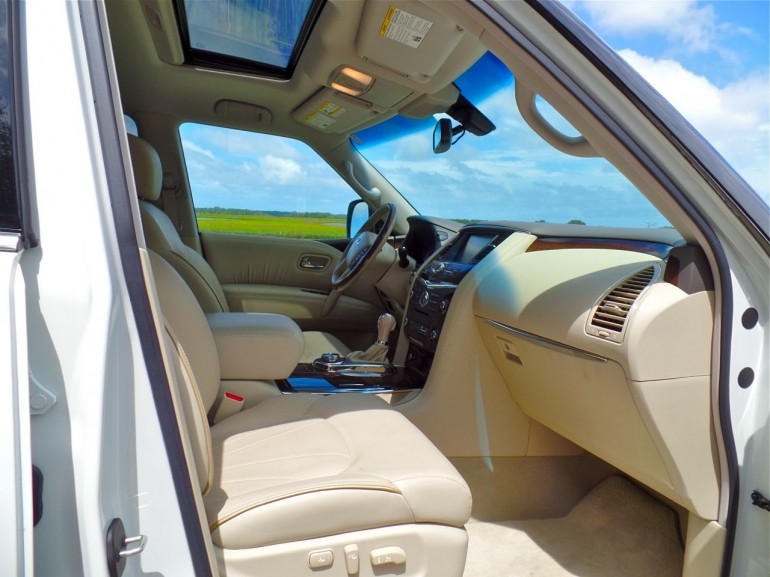 My favorite technology feature on the 2014 Infiniti QX80 is the intelligent cruise control with full-speed range. Activating the system is similar to a conventional cruise control, but unlike traditional cruise control the Infiniti uses a laser – how’s that for science fiction tech – to measure the distance that the QX80 is from the vehicle ahead and slow the vehicle to help maintain a safe, user controlled, distance. Once the traffic is clear, the Infiniti once again accelerates to the preset speed and you are on your way. 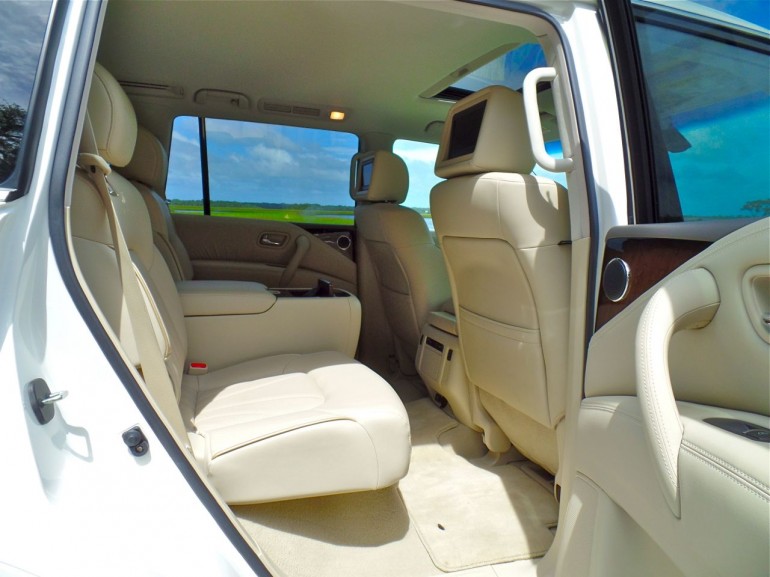 The full-speed range feature allows you to use the intelligent cruise in low speed situations, even in heavy traffic. By setting the cruise control to the roads posted speed limit and allowing the vehicle to control the throttle and brakes, you avoid the chance of rear end collisions and once the traffic finally does break, that sigh of relief moving violation-provoking acceleration. If you want more control over the vehicles speed than the intelligent cruise allows, the Infiniti still provides braking assistance through the distance control assist feature that intuitively helps the driver release the throttle and will automatically apply the brakes in detecting slowing traffic ahead. 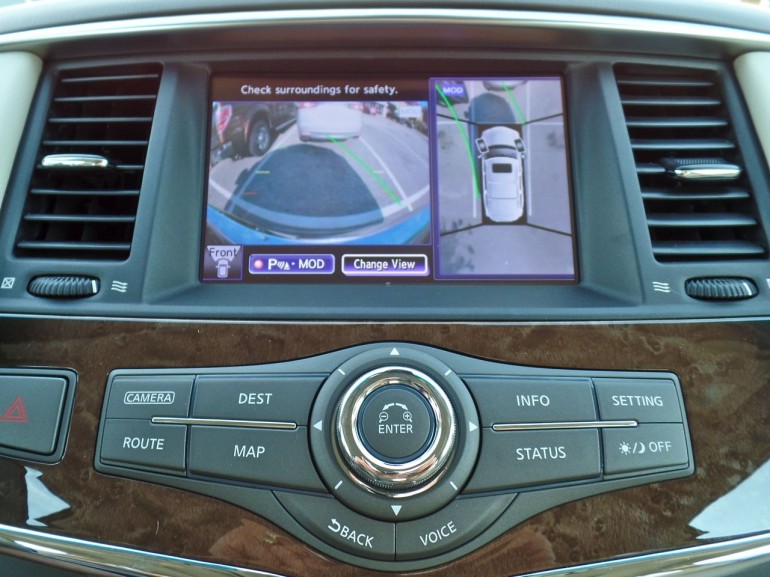 Finally, and this is the system that you NEVER want to have to test out, the intelligent brake assist with forward collision warning uses the intelligent cruise control laser to sense an imminent collision and provide a two-stage warning to help the driver avoid impact. If the driver is unable to respond, the Infiniti will automatically engage the brakes to reduce the speed of a collision. Fortunately, I was unable to test this feature during my weeklong review.