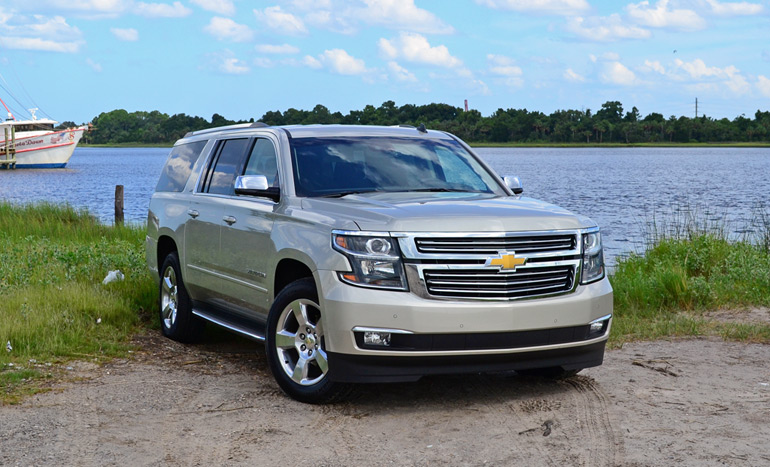 The Chevrolet Suburban has always been a vehicle to properly place its mark in the automotive world as a unique offering serving multiple duties and delivering on whatever expectations you had for a large SUV without fail. As the unassuming classic that it is, the Suburban has helped pioneer today’s large SUV segment in more ways than some are willing to give it credit for – dating back to the 1930s. Today, the all-new 2015 Chevrolet Suburban takes on that unique large SUV character with a polished face and many improved aspects that continue to keep it in the running during a time when gas prices are high and Americans fail to give up their thirst for massive body-on-frame SUVs with many capabilities. 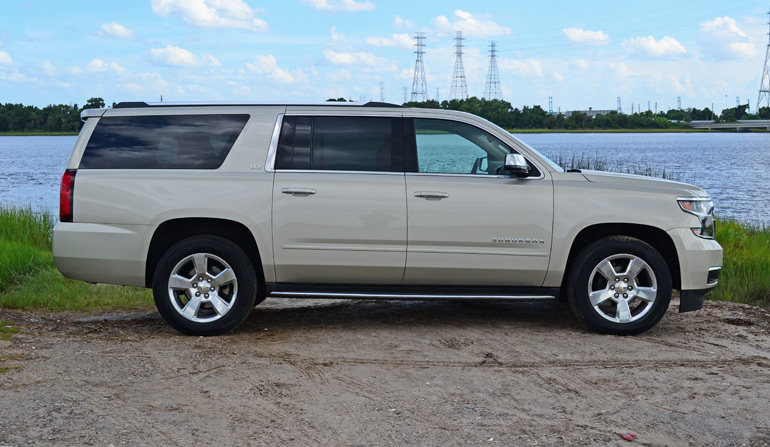 The all-new 2015 Chevrolet Suburban embarks on its journey as one of the largest SUVs you can find sporting its new styling, better driving characteristics, decent fuel efficiency considering its sheer size, exceptional versatility, and a nice hint of true luxury appeal. Those requiring 3 rows of seating, seating for up to 9 in total on the Suburban LS trim, and the utilization of an enormous cargo compartment, the Suburban is the right tool for many jobs. For the 2015 model year, receiving a complete redesign, the 2015 Suburban gets its 5.3-liter V8 engine producing 355 horsepower and 383 lb-ft of torque. The V8 engine is mated to a 6-speed transmission, which provides solid shifts, mostly smooth, transmitting the power to the rear wheels or to a 4-wheel-drive system. The 4-wheel-drive system can be had in a single speed version or  with a two-speed transfer case and low-range gearing through the Max Trailering package as found on my 2015 Chevy Suburban 4WD LTZ test vehicle. 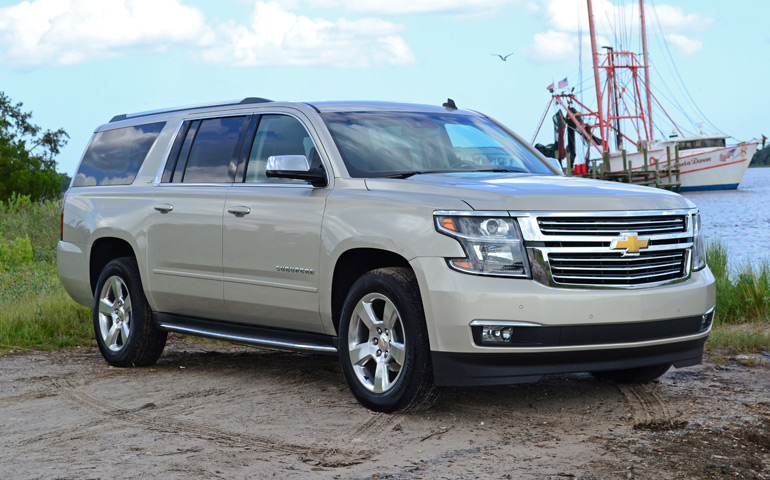 Out on the road the new 2015 Chevrolet Suburban in the LTZ trim, featuring its standard Magnetic Ride Control adaptive dampers, takes on a newfound balance in such a massively large SUV. The Chevy Suburban with the magnetic dampers proves to be a vehicle that gives the driver an added state of confidence and easy of drivability. Basically, the magnetic dampers, just as those found in many other General Motor vehicle applications, constantly adjust to keep body movement to a minimum. In the Suburban, considering its large size and weight tipping the scale at 5,546 pounds, it may be expected to be clumsy but it is just the opposite. The suspension system, ever-so-adjusting the dampers as it reads the road, virtually flattens bumps and dips in the pavement to prevent most unwanted body bounce and even some roll when performing sharp turns. Of course there is an easily attainable point where the large Suburban will falter on sharp turns and stability control starts to heavily step in for an attempt to ‘save the day’ and prevent the behemoth from rolling or completely going out of control. In all, the magnetic ride control as standard equipment on the all-new Suburban LTZ trim is a welcomed feature that makes the ride and handling attributes all the better, probably just as great when towing up to is max at 8,000 pounds (4WD) or a cargo load hauling nearly 1,800 pounds of cargo and passengers. 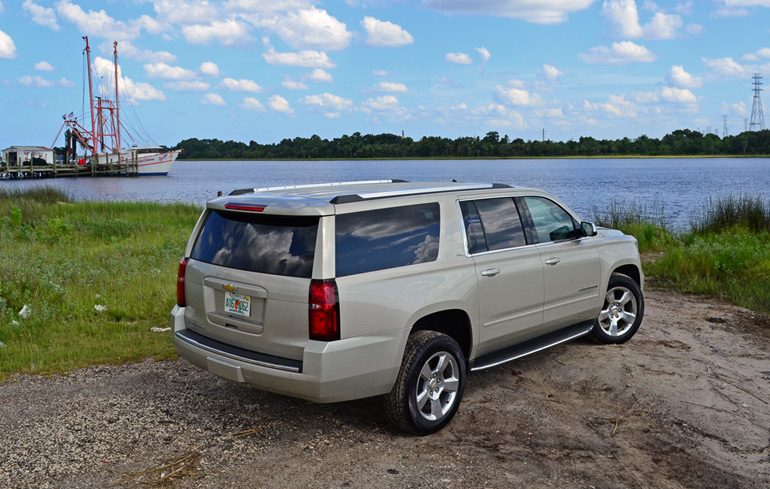 In terms of driving the 2015 Chevy Suburban LTZ, it is surprisingly easy to navigate and maneuver. The steering effort and feedback is just enough to communicate the right information to the driver and through the use of the parking assist, wide rearview mirrors with blindspot detection, lane-departure warning and wide-angle rearview camera with cross-traffic detection (blindspot warning, cross-traffic detection, lane-departure warning, parking assist and forward collision notifications made through the vibrating safety-alert driver’s seat), the Suburban is relative to any other body-on-frame SUV and at some points easier to drive. Even still, the Suburban’s decent braking and acceleration also ensure driver confidence – never assuming the Suburban gets away from you under most conditions on the road. The 5.3-liter V8 engine is capable of getting the Suburban up to 60 mph from a stop in about 7.3 seconds, not too bad considering. 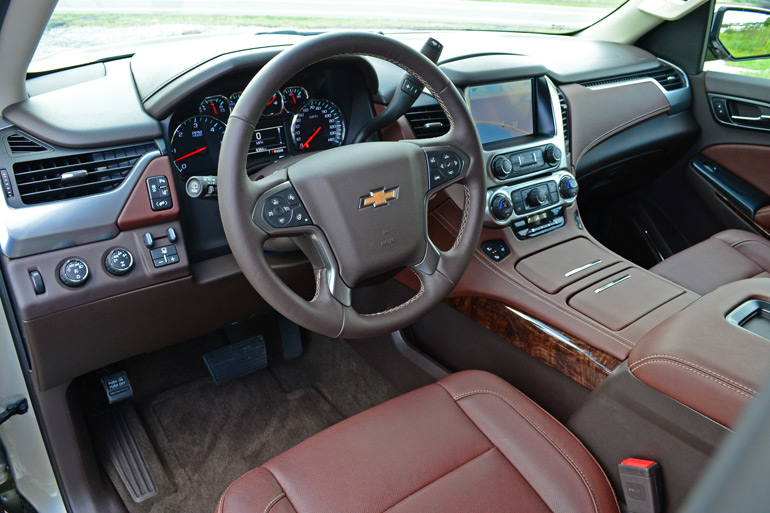 The comfort of the 2015 Chevrolet Suburban LTZ takes everything about the interior up a notch or two from its predecessor. Additionally, the ease of cargo access and new arrangement of 3rd row of seats, giving you the ability to fold the row flat into the floor, gives you unadulterated access to a voluminous 121 cubic feet of space with the 2nd and 3rd row seats folded. There is also a storage compartment access below the floor out back of the 3rd row for ‘hiding’ items. In terms of seating comfort, the 2015 Suburban serves up a nice bevy of seating options where you could get a 9-passenger configuration. In my Suburban LTZ-trimmed test vehicle the seating configuration is good for 7 passengers, two passengers up front, 2 captain’s chairs for the 2nd row, and a 60/40 split bench for the 3rd row. Room up front and the 2nd row is good for comfortably seating anything from small kids to NFL linebackers. Out back in the 3rd row, space is good but it can be daring for someone well-over 6-feet tall as leg room starts to come into play limiting you to just over 34 inches. Though, spacing is ample throughout the cabin and most should not have any qualms over sharing the 3rd row split-folding bench, even with 3 adults back there. 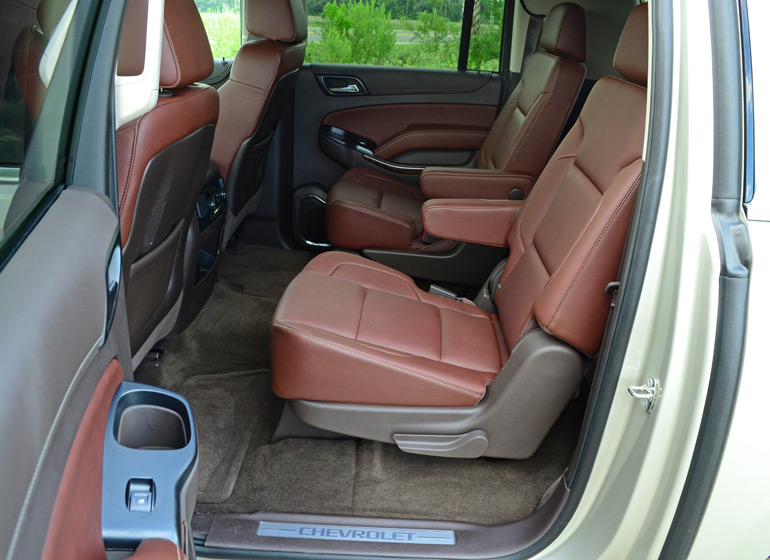 The new interior of the 2015 Suburban, pretty much on par with its ‘shorter’ Tahoe sibling, features many luxury aspects where most areas are of a soft touch and there is plenty user-friendly integration with the latest Chevy MyLink touchscreen interface, combining voice control, smartphone app integration, Siri Eyes Free for iPhones and text-to-voice for compatible smartphones). Part of my loaded-up Suburban LTZ was the ‘Sun, Entertainment, Destination’ package adding a sunroof, rear-seat entertainment (two roof-mounted drop-down screens with Blue-Ray/DVD player via dashboard access) and a navigation system integrated in the MyLink infotainment system. Also added was a new Theft-Deterrent package including motion sensors, glass break sensors and a self-powered horn activated as part of a sounding alarm situation. 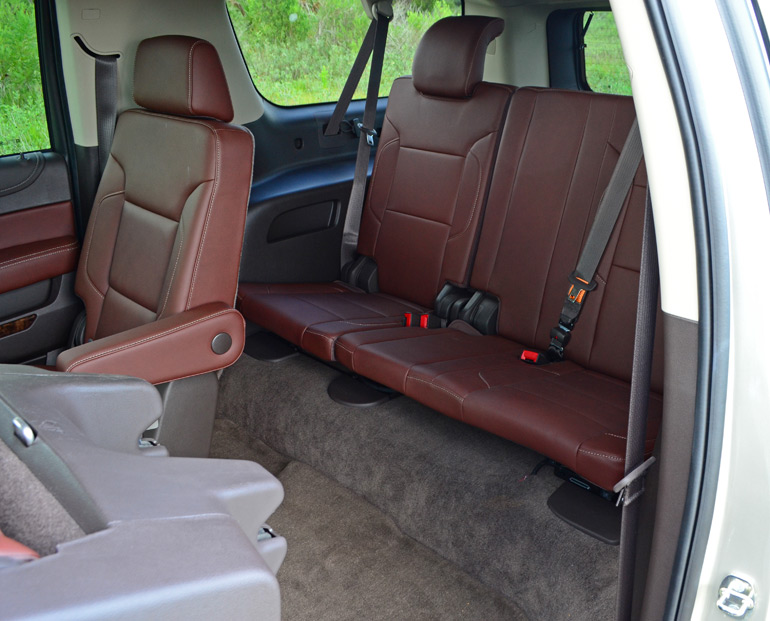 The economical side of the all-new 2015 Chevrolet Suburban comes in the form of its cylinder deactivation for the V8 engine. At times the system will go to a 4-cylinder mode when the load is light attempting to conserve fuel. The system works seamlessly where you hardly ever notice switchover from V4 to V8 modes. Without it, I would not be able to reach my Suburban LTZ 4WD’s EPA estimated highway figure of 22 mpg. City rating comes in at 15 mpg where I averaged about 16.9 mpg around town and just met the 22 mpg highway figure on the interstate with only three passengers. The Suburban configured with two-wheel-drive improves the gas mileage figure by 1 mpg city and highway, respectfully. 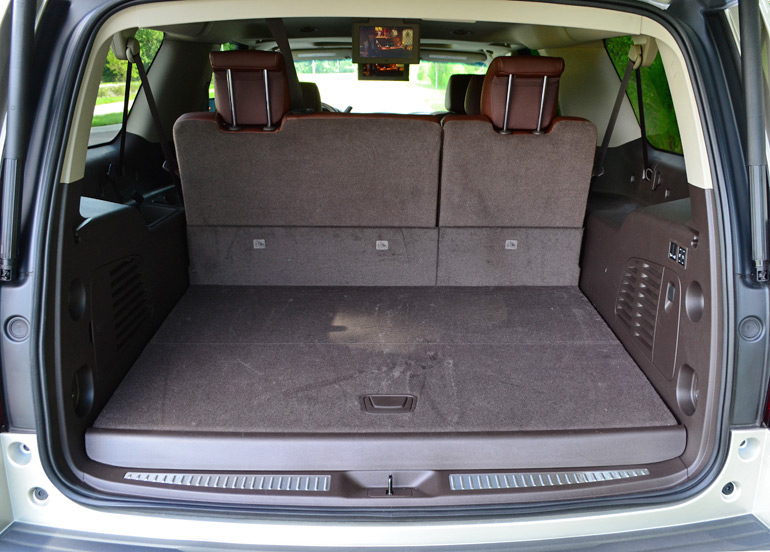 The design elements of the all-new 2015 Chevrolet Suburban takes a new approach for a wider stance yet shorter roofline height from the ground. The other exterior elements with an aluminum hood and aluminum power tailgate w/an opening (pivot-up) glass access door, and newly styled HID headlights with LED daytime running lights, surround a slightly re-sculpted formula, one that has been derived from serving its unique audience over many decades. The large 20-inch wheels standard on my Suburban LTZ trimmed vehicle add a nice appeal as do the optional larger 22-inch wheel choices. Even though the ride remained rather smooth on my 2015 Suburban LTZ 4WD with the 20-inch wheels and Magnetic Ride Control, I would suspect the larger 22-inch rollers, being as stylish as they are, could yield a firmer ride. 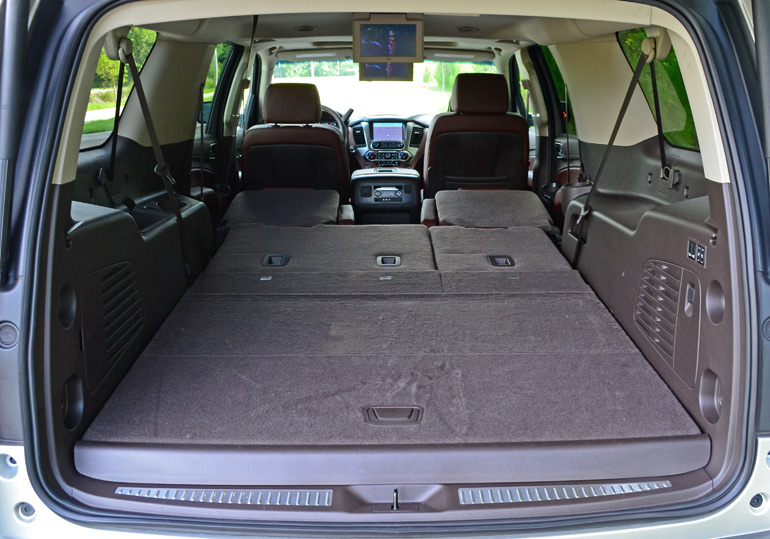 The latest Chevrolet Suburban piles on the capability of a rugged truck with the plushness and versatile-functionality of today’s luxury SUVs all in a massively large package. This package, in all of its mammoth-proportioned wrapping, comes at a premium if you want the top-end of the feature scale. Although, the all-new 2015 Chevrolet Suburban starts at $48,295 in its base LT-trim form, jumping up to the top-trimmed LTZ model (LTZ 2WD base $62,695 w/ $995 destination charge) with several option packages as mentioned previously, in addition to adaptive cruise control, brings the pricing to an as-tested $71,385 including a $995 destination charge. 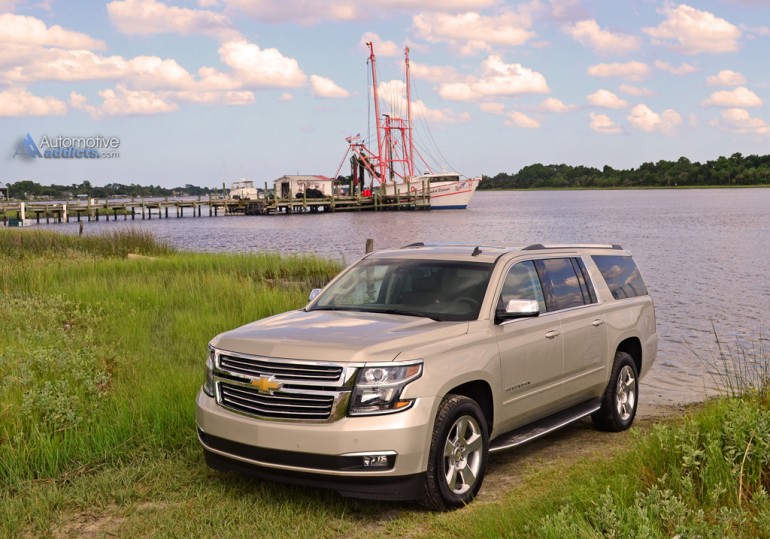