Grit and Grace at the Crossroads: The All-New 2015 Lexus NX 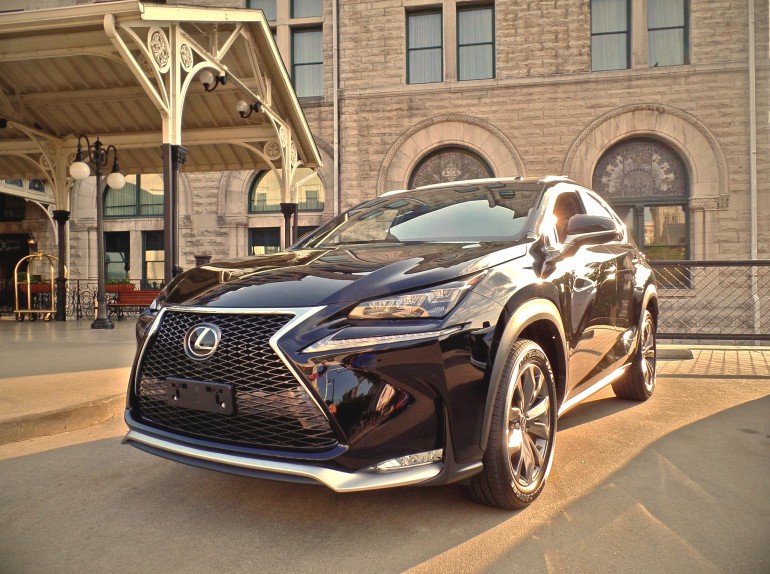 Long before I had my learners permit, I had a license to rock the electric guitar. Dad played and always had a couple of cool six strings lying around the house. I remember, at the ripe old age of 9, wiring up my portable record player so that I could plug my father’s late 60’s Gibson Les Paul into it and rock out. Actually, that may be a stretch; I think my musical creation might have been more ear piercing, neighbor aggravating, overdriven guitar noise than anything you would hear on the radio. Eventually I did learn how to play, to the point where I could almost make a living at it. Family obligations and exciting work opportunities arose and the guitar eventually became more of a hobby than a profession. 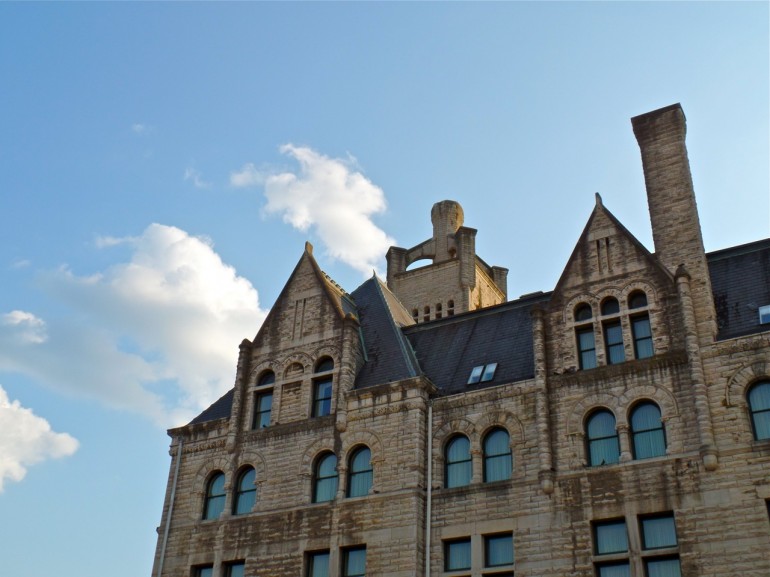 Nashville, Tennessee has always had a special place in my heart. As a young man, I dreamt of loading dad’s vintage Gibson into my beat up Volvo wagon, saying goodbye to everything familiar, and driving to Music City USA in hopes of becoming a recording artist. Nashville is a place where dreams come true. Yes, the odds are tough and it takes giving 100% all the time, but there is hope. Nashville is a city that has a strong history creating superstars. A talented artist, with just the right combination of grit and grace can rise to the top and succeed. 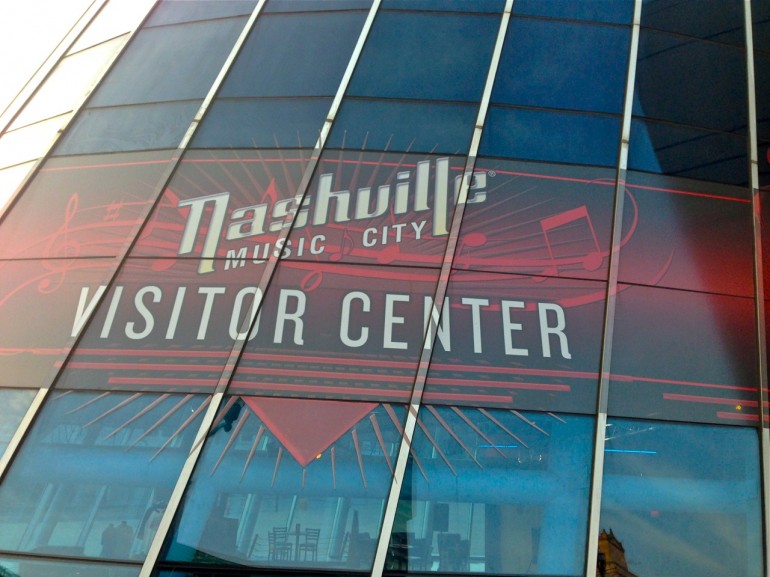 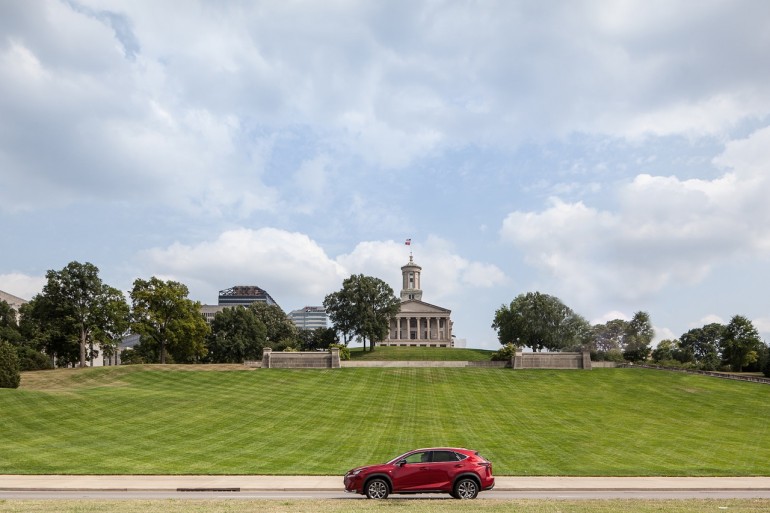 The Parthenon in Nashville, Tennessee is a full-scale replica of the original Parthenon in Athens. It was built in 1897 as part of the Tennessee Centennial Exposition. Photo courtesy of Ashton Staniszewski for Lexus.

I am not sure if there is a struggling musician or two on the marketing team or maybe it was that that American Idol was holding its 14th season auditions just minutes from the hotel, but Lexus perfectly captured the spirit of Nashville by hosting the press preview of the all-new 2015 Lexus NX in the heart of the city’s historic downtown area. Much like the highly successful musicians that call Nashville home, the aggressively styled compact crossover combines functional real-world never quit utility with tastefully executed finesse and luxury, or as the Lexus team dubbed it, the Lexus NX exemplifies the convergence of “true grit and pure grace.” 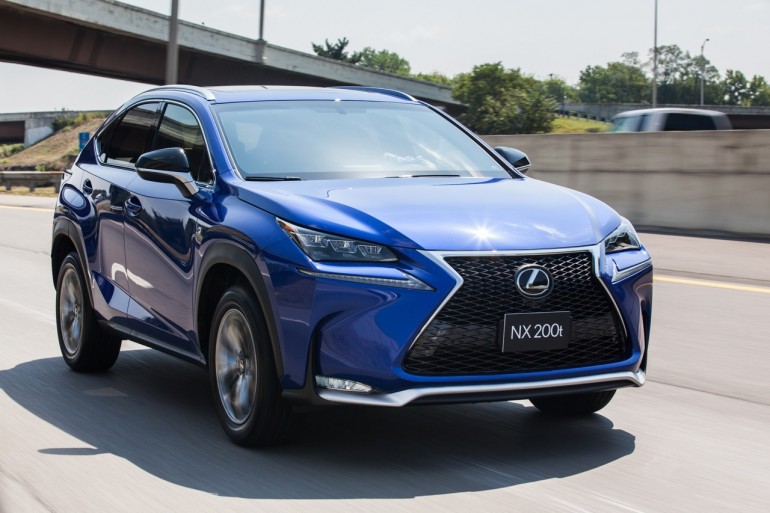 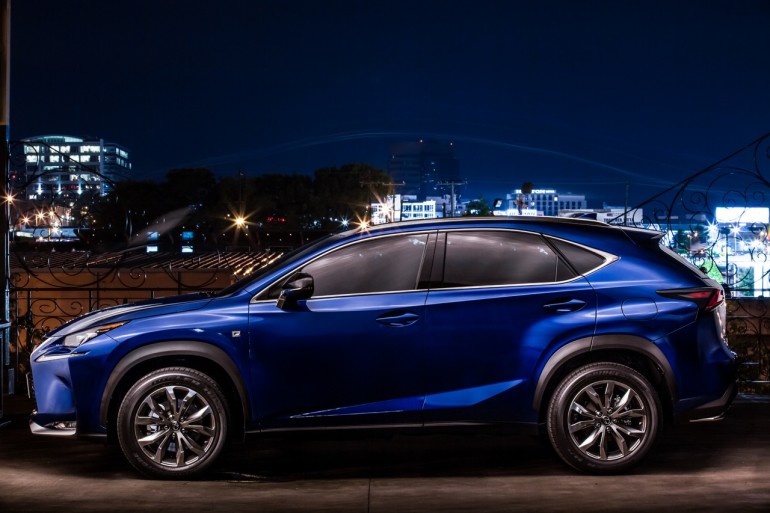 Powered by an all-new 235-horsepower 2.0L twin-scroll turbocharged in-line 4-cylinder engine that reaches the peak 258 lb-ft of torque at only 1,650 rpm, the 2015 Lexus NX 200t is a capable performer that illustrates the Lexus commitment to finding the best balance of power and efficiency. When equipped with the all-weather Dynamic Torque Control all-wheel-drive system, the nimble-feeling 4,050 lb crossover SUV reaches 60 mph in 7.0 seconds while achieving an estimated 21/28/24 City/Hwy/Combined mpg on premium fuel. The front wheel drive model loses two tenths of a second to 60 (7.2 seconds) but gains a mile per gallon city 22/28/24 City/Hwy/Combined mpg. The smooth shifting 6-speed Multi-Mode Electronically Controlled automatic transmission does an excellent job sending the power to the wheels, and can be manually controlled to enhance the driving experience. 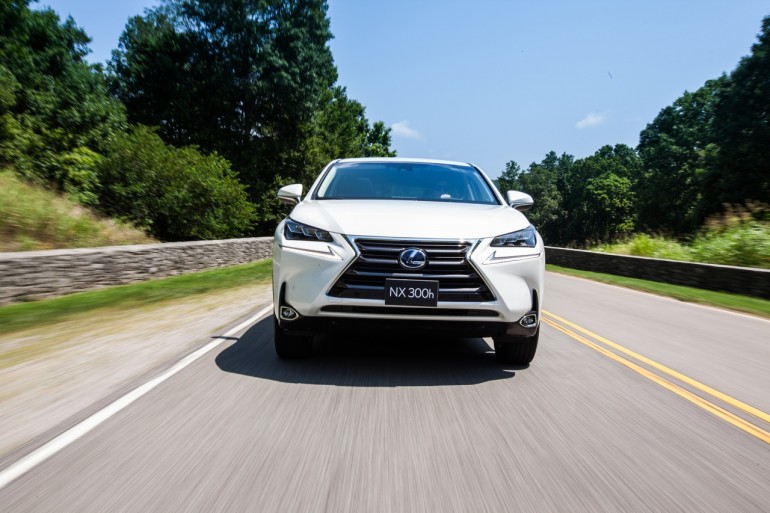 The new NX also comes in a hybrid model, the 2015 Lexus NX 300h, which combines the power of a 2.5L in-line 4-cylinder fuel saving Atkinson-cycle engine with two electric motors – three if you select the Lexus E-Four AWD model – and sends it to an all-new electronic continuously variable transmission that employs a kickdown feature for enhanced acceleration. The crossover SUV’s estimated fuel economy is impressive at 35/31/33 City/Hwy/Combined mpg, especially considering the size and performance of the vehicle. I have always been impressed with the Lexus hybrid offerings and the NX 300h does not disappoint. The manufacturer has a brilliant way of making you forget that you are getting great gas mileage. The car feels incredibly “normal” when you are behind the wheel, it is only at the pump – the low-test 87-octane pump – that you remember the car is a battery enhanced fuel sipper. 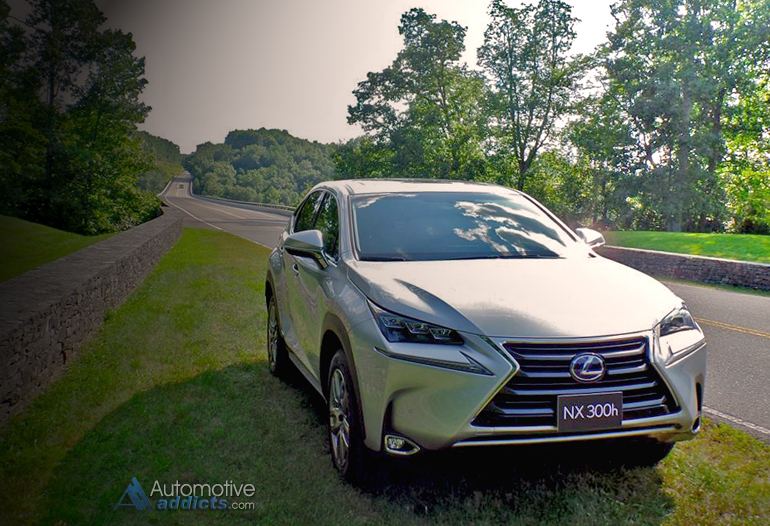 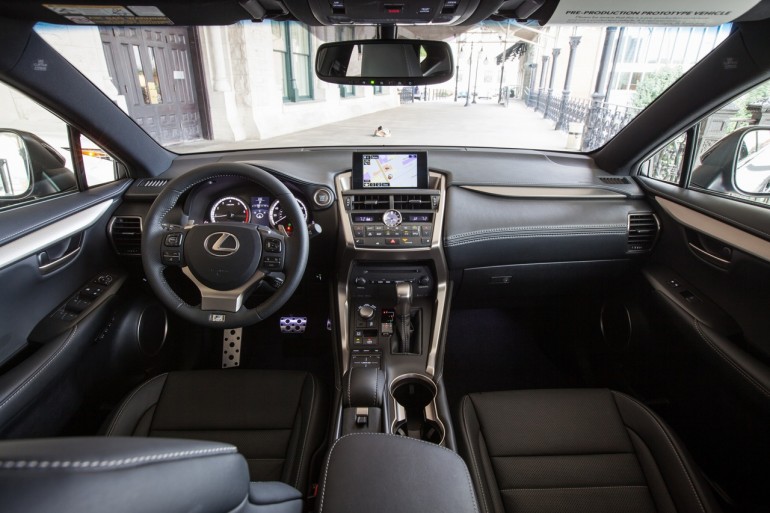 The aggressively futuristic, aerodynamic styling of the all-new NX may not be for the faint of heart, but I really like it. The massive spindle grille and LED L-themed headlights signal that the all-new NX, especially in the F-Sport trim, means business. The entire crossover SUV stands like a fighter jet on the deck of an aircraft carrier, leaning slightly forward, ready to launch. The crisp angles of the bodywork pay homage to the concept of forging a vehicle from a single piece of metal. According to Lexus, the designers “used the die of the spindle grille as a base over which molten steel was poured to see how the shape would naturally form. The result inspired the NX’s angular, integral shape.” 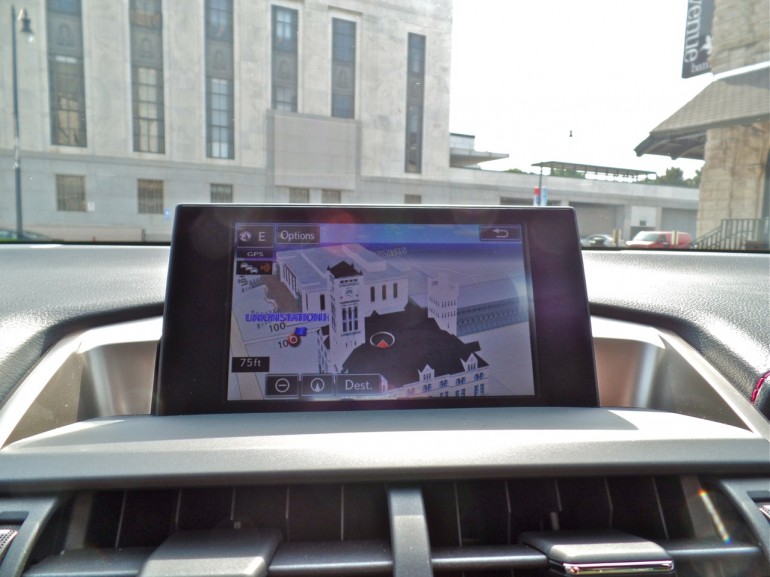 Opening the door to the all-new NX reveals a purpose-built driver friendly environment that spares nothing for luxury, but appeals to the enthusiast. Further establishing the grit and grace metaphor, the bolstered front seats are sports car approved, but comfortable enough for a cross-country trek. The dashboard and cluster are immediately Lexus, which means rich leather wrapped metals, soft touch surfaces, bold contrasting trim work, thoughtful ergonomic design and cutting edge technology. 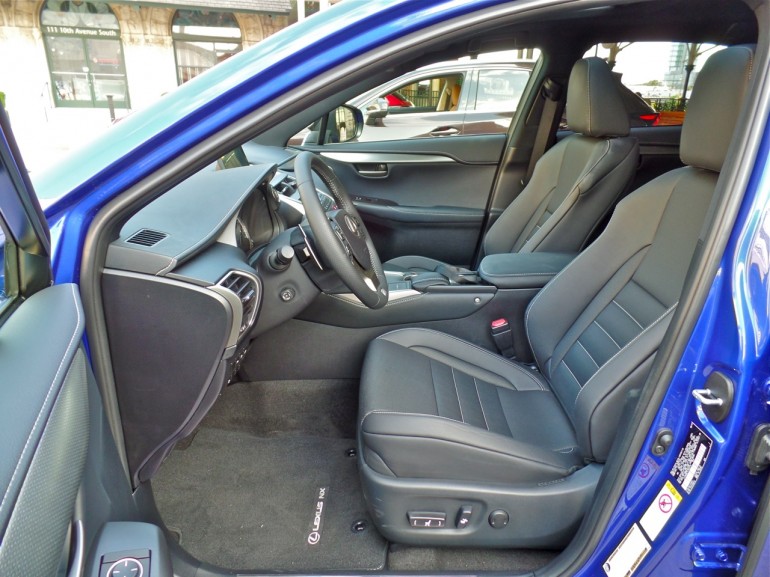 Not content to rest on it’s laurels, Lexus has included an all-new Qi Wireless Charging Tray for portable devices and the Lexus Remote Touch Interface (RTI) that uses a center console mounted touch pad to control a easy to read multi-informational display. The best way to describe RTI is to compare it to the familiar touch pad on my MacBook Pro; it is surprisingly intuitive, and even clumsy fingers often provide the desired outcome. Turbo models also feature a Lexus-first digital G-Force meter and boost gauge. 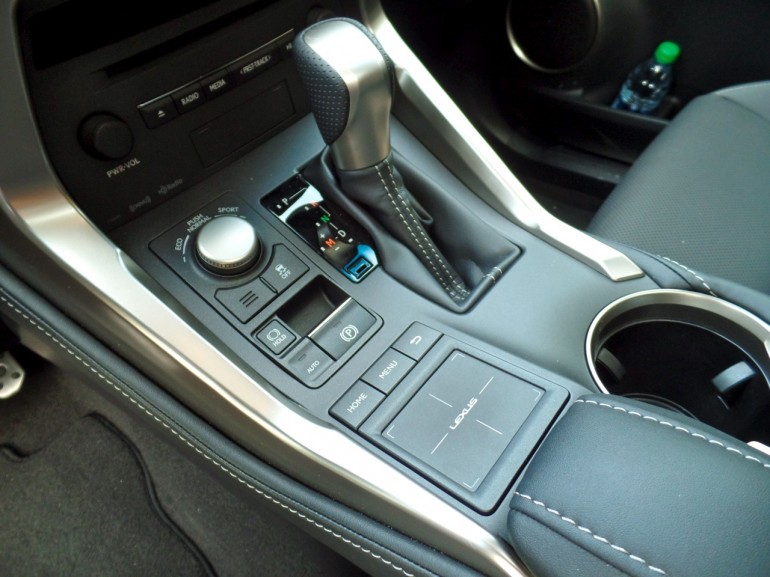 Lexus has yet to announce pricing, but the manufacturer reps hinted that the NX will start in the low $40k range. With the limited information they provided, it does appear that Lexus is aiming for young families and single professionals who desire a vehicle that offers SUV capabilities with sports car driving dynamics at a price point that won’t break the bank. 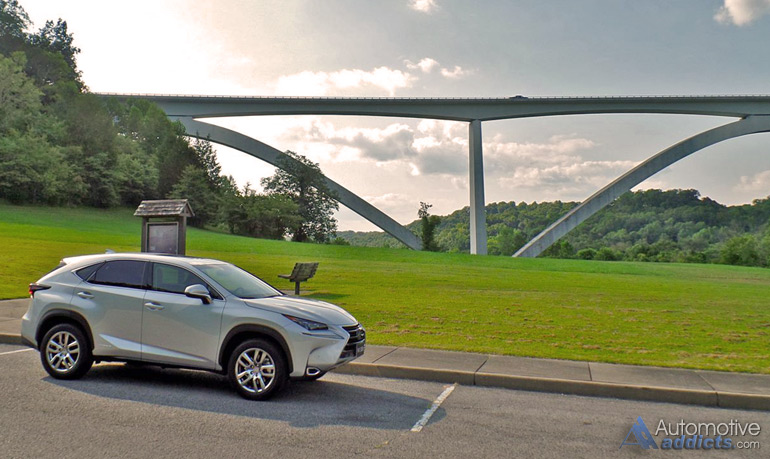 I have the rare opportunity of being able to subjectively drive vehicles of every price range, size, and performance capability and I can assure you that the all-new Lexus NX is special. The combination of driving performance, real-world utilitarian convenience, and pampered luxury is pretty tough to beat and something to look forward to when the vehicle hits dealers this fall.