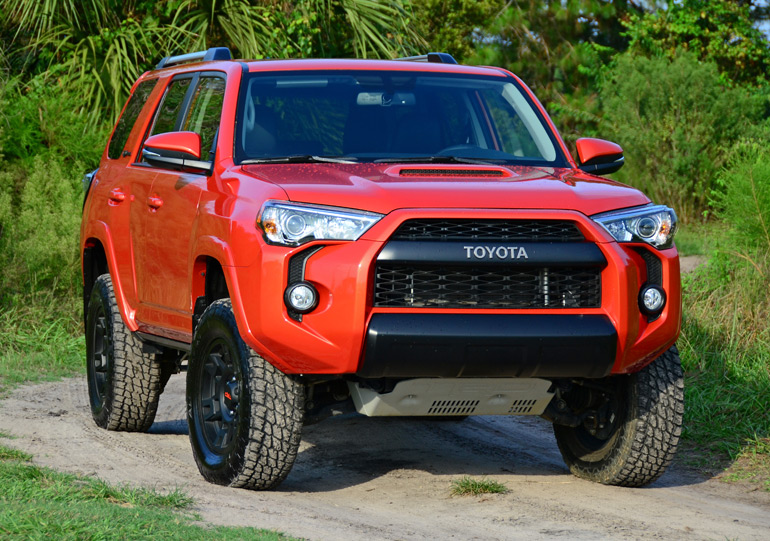 I’m one of those rare birds that enjoys a good Sports Utility Vehicle that has a proven track record of being somewhat capable over rough terrain yet proves to be a comfortable transportation device on paved roads. For many years Toyota has had the 4Runner leading the way in this aspect and continues to do so as one of the very few off-road capable SUVs left in its class. 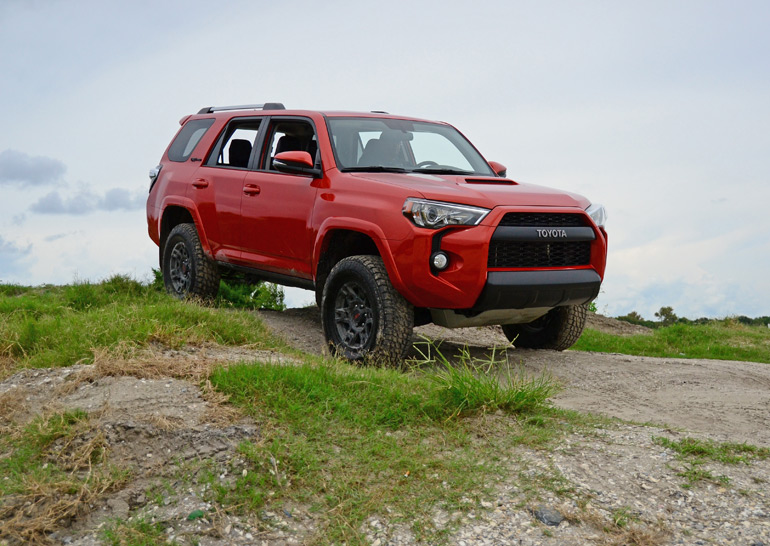 In the latest attempt by Toyota to fulfill the desires of rugged off-roading truck and SUV-seekers, a new line of the Tundra, Tacoma and 4Runner have been released as the exclusive TRD Pro series. With the all-new TRD Pro series, offered as a unique trim level, each vehicle gets several exclusive upgrades custom tailored from the TRD (Toyota Racing Development) outfit of the brand. 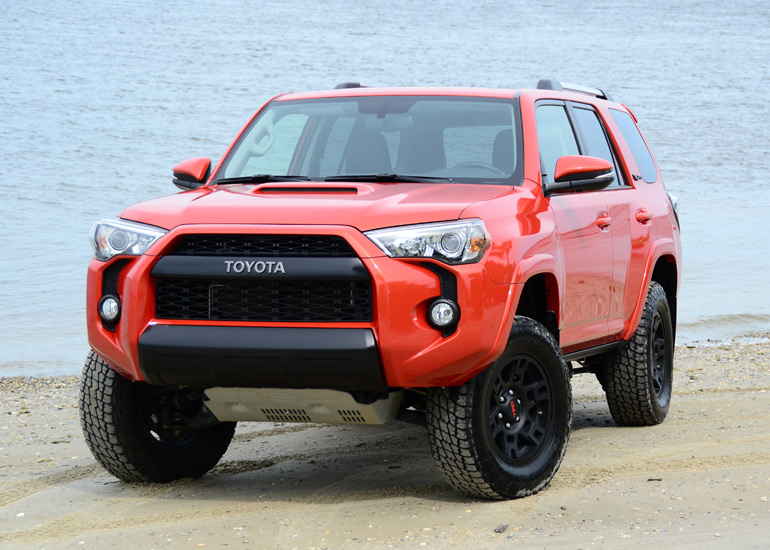 Just this past week Toyota called us up and offered the Automotive Addicts team a chance to get a hold of the 2015 4Runner TRD Pro Pre-Production Prototype. Of course we didn’t hesitate to accept the opportunity as we knew our southern domain would truly put such a vehicle to the test in some local off-roading areas. 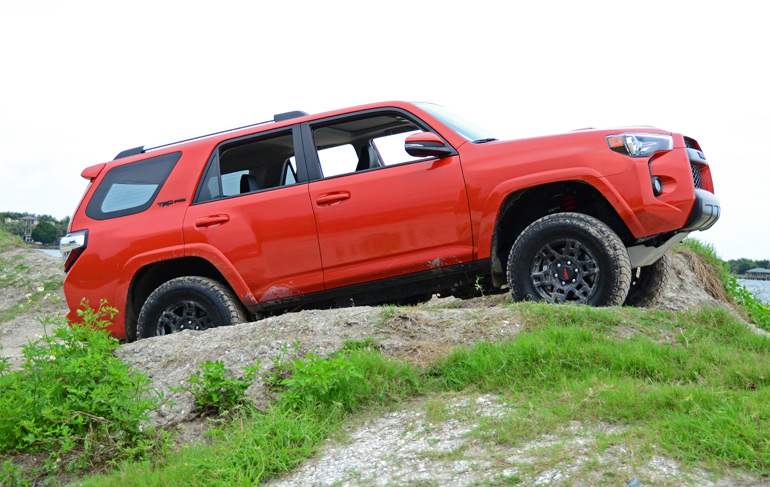 The first impressions of the all-new 2015 Toyota 4Runner TRD Pro take us to limited offerings by manufacturers of vehicles with several aftermarket bits bolted onto a vehicle so it is able to serve more than one purpose. With the new 4Runner TRD Pro the approach seems to take on a new life where the sum of its “added” parts all mesh together in perfect harmony. In other words, the TRD customization of the 4Runner seems to never diminish the original rugged foundation of the 4Runner, as it was already a proven SUV that played its road-going and off-roading duty games well. Taking things to higher level, which is obvious by the looks of the 4Runner TRD Pro alone, the vehicle is raised about an inch and a half at the front thanks to Eibach springs and high capacity Bilstein shocks on all four corners. The Bilstein shocks are a marvel in themselves with the added remote reservoirs and additional 1-inch of wheel travel enabled for the front and rear. Being based on the 4Runner Trail trim, an already rugged and off-road capable vehicle, the TRD Pro series is more one-of-a-kind in its strive to kick up its off-road prowess a few notches. 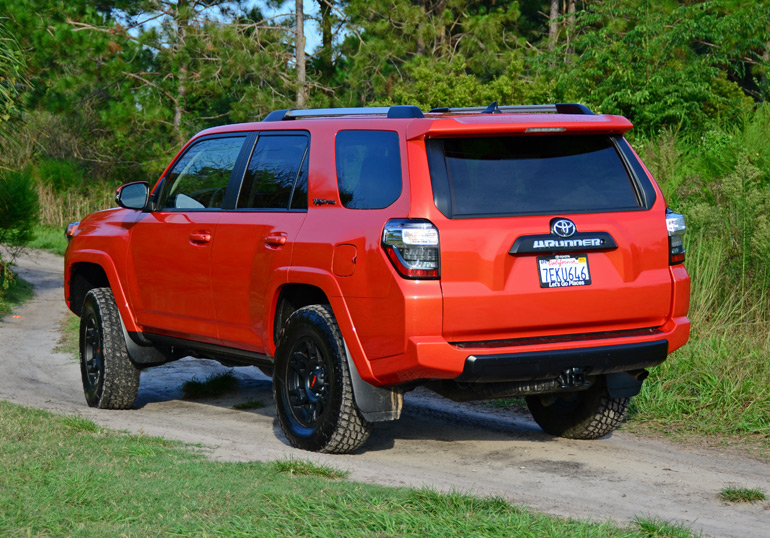 The TRD Pro 4Runner, just like the 4Runner Trail, gets a standard locking rear differential, crawl control, and a multiterrain select system. These systems, combined with part-time 4-wheel-drive, are sophisticated in their willingness to allow the 4Runner TRD Pro to conquer different types of terrain in a selectable fashion having multiple modes for landscapes you may find yourself prowling on. Where the TRD Pro sets itself apart is the higher ground clearance, its unique TRD suspension, TRD front skid plate, black wheels, TRD floor mats, TRD shift knob, TRD Pro badges on the side and the classic “TOYOTA” badge up front. Of course you can’t forget the Inferno Orange exterior color of our preproduction test vehicle. Speaking of colors, the 4Runner TRD Pro will only be available with 3 colors, our Inferno Orange, Black or Super White. 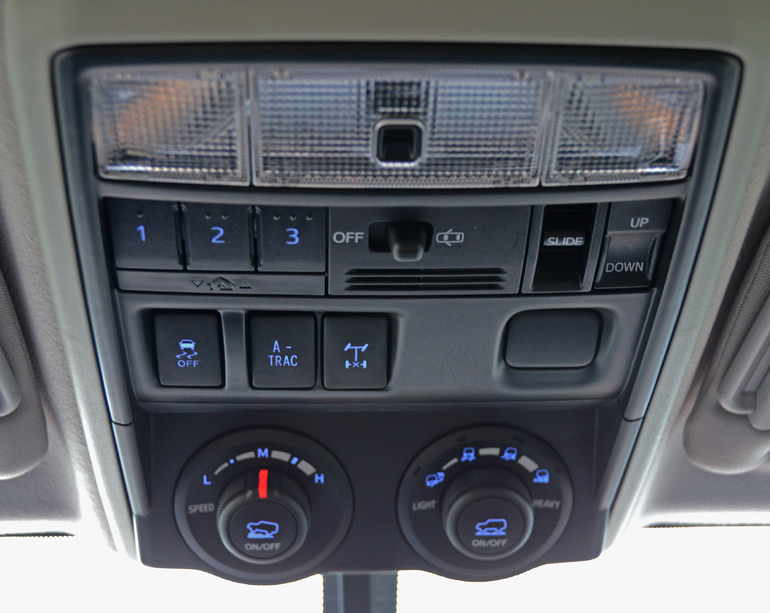 Setting off in the new 4Runner TRD Pro takes you by surprise on pavement as it projects a rather smooth and initially stable ride. For a vehicle with a suspension setup able to handle just about any type of terrain you are willing to throw at an off-road vehicle, the 4Runner TRD Pro handles flat pavement at highway speeds like a luxurious sedan. Yes, I did say that. It seems almost as if the faster you go the smoother the ride gets. However, bending into turns exhibits how an off-road tuned suspension really behaves as body roll comes in abundant amounts. Yet, the 4Runner TRD Pro remains predictable on normal roads. It is not until you get onto rough terrain that the suspension and knobby tires start to really play the game they were designed for. Performing light jumps over hills feels like you are landing on an air mattress. The suspension is what really makes the 4Runner TRD Pro a champ in its element. 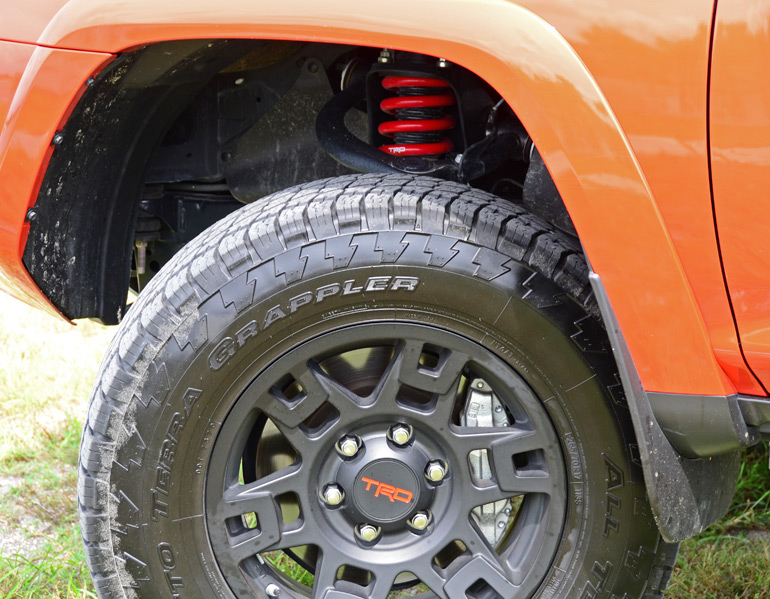 Setting things in motion remains in the hands of Toyota’s proven 4.0-liter V6 engine with 270 horsepower at 5,600 rpm and 278 lb-ft of torque at 4,400 rpm mated to a 5-speed automatic transmission. If there ever is an area that hard-core off-road thrillers will frown upon, is the same power output from the powertrain being used for the 4Runner TRD Pro. Sure, it could use more power. However, in the retrospect of crawling over rocks, mud, deep water, sand or any other type of muck, the 4Runner TRD Pro’s powertrain is sufficient and never a lounging SUV even on the highway and local roads reaching 60 mph in about 7.7 seconds. Where many are going the way of 8-speed automatics, the proven reliability and no-fuss setup of the 5-speed automatic unit only adds to the rugged formula of the TRD Pro 4Runner. Of course at when it comes to fuel consumption the 4Runner TRD Pro mostly retains the normal 4Runner’s 4×4 figures estimated at 17 mpg city and 21 mpg highway. 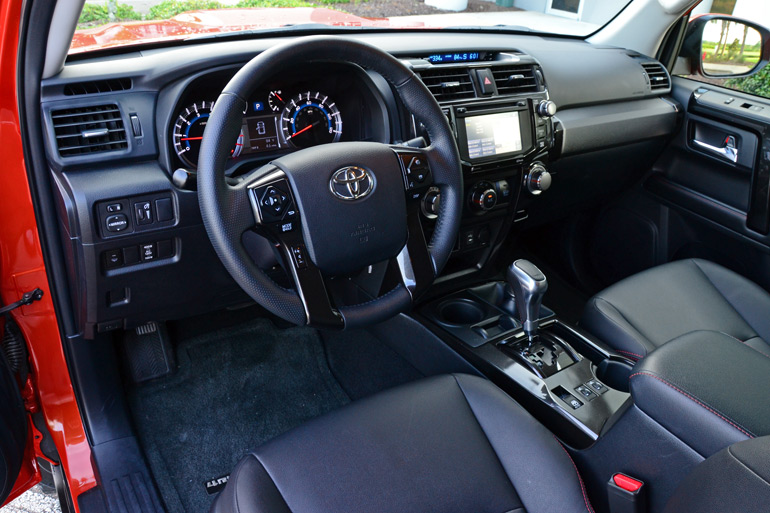 The interior of the 2015 Toyota 4Runner TRD Pro pulls off amazing visual acts of kindness where most of its plastic surfaces never look cheap or uninviting. The large dials for the manual climate control system and audio also fit the rugged tone of the 4Runner TRD Pro’s cabin and exterior. The nicely accented red stitching throughout the leather seats all play to the same tune whereas they are easy to wipe down in the event that a little mud finds its way inside.
With only 3,400 fine examples of the 4Runner TRD Pro making their way into production for the 2015 model year, they will surely go fast. With several SUVs going the way of car-based unibody structures, basically losing their true off-roading roots, the 4Runner TRD Pro fills that gap shining as bright as the Inferno Orange paint. Not to mention, the attractive value perception starts and ends with its respectable pricing starting around $41,000 when it goes on sale next month. 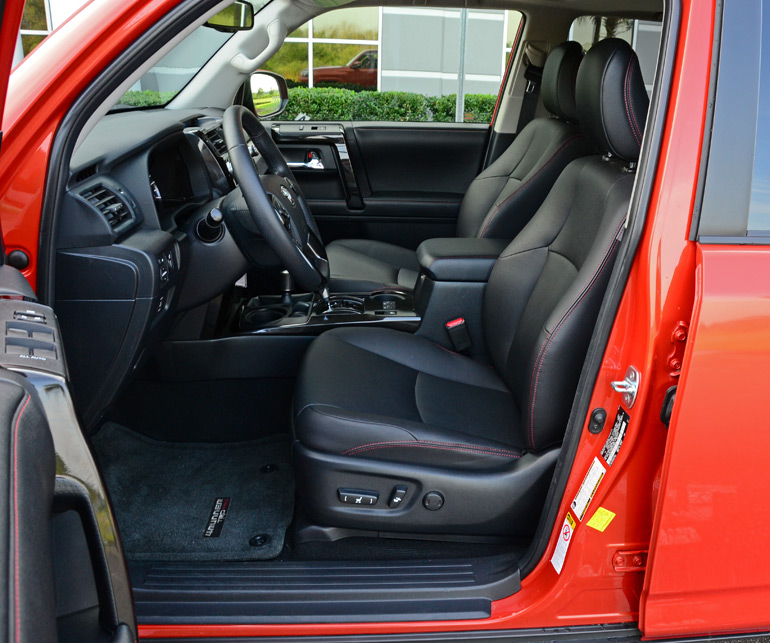 I’ve never considered myself an “off-road” kind of guy. Truth is, my love for tiny sports cars has given me tunnel vision. I have friends who crave all things piles of dirt and loose gravel, but the thought of either anywhere near my cars kind of makes me cringe. Sure, I remember watching the Big Foot monster truck specials on TV as a kid, but I also watched the Teenage Mutant Ninja Turtles and Mighty Mouse, and all three seemed equally cartoonish. 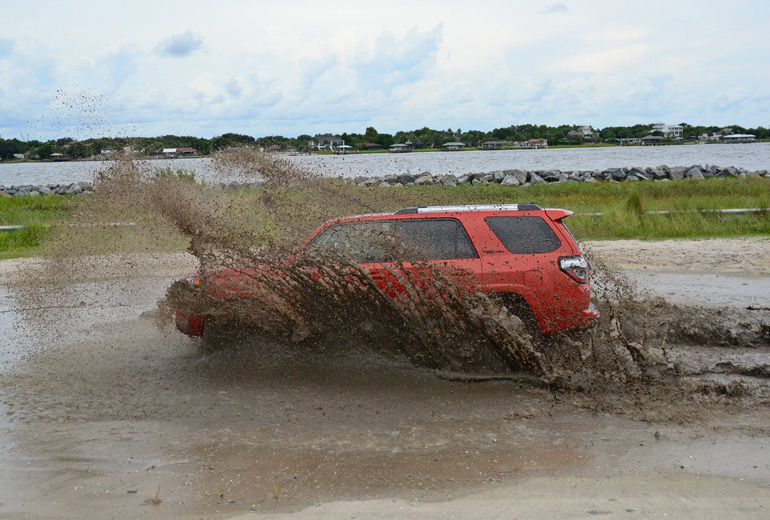 When the Toyota 4Runner TRD Pro arrived all dressed up with knobby tires, bright red Eibach springs, and Inferno Orange paint, I giggled a little. I instantly pictured myself jumping school buses and climbing out of the window, just above welded-shut doors, standing on the roof and raising my arms triumphantly. The 4Runner is that aggressive looking. One of the pictures I posted on my Facebook page actually elicited the comment of “that looks like an angry bulldog!” It is safe to say that Toyota has created a trophy truck, which you can buy at a dealer, and for a reasonable price. 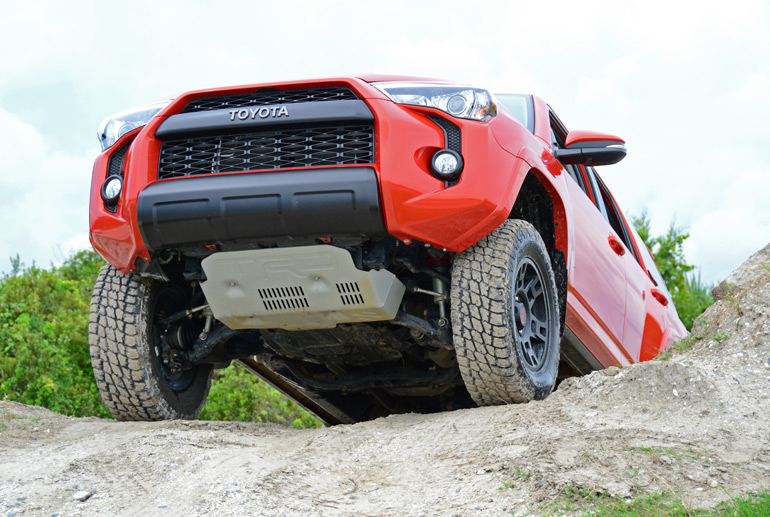 Jumping up into the truck was a feat in itself, the raised ground clearance and absence of running boards means that you have to get a bit of a running start and hope for the best, but once you are inside it kind of hits you. Toyota has created a jack-of-all-trades. The interior is spacious, well appointed, and frankly, luxurious. Within seconds you forget that you are inside of a truck that is just, well, plain ole scary to everyone else on the road! 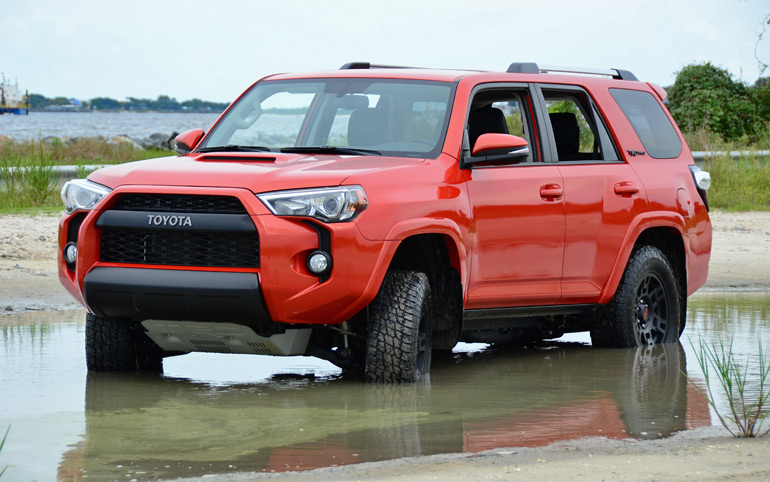 Driving the 4Runner is surprisingly refined. The power goes down to the ground through the massive tires, but when you are sitting what feels like 6 feet above the rest of traffic it feels more like you are cruising along in a Lexus sedan. Seriously, you almost forget that you are driving an SUV that is built for climbing impossible terrain and running through deep water. Of course, that is until you actually take it on impossible terrain and run it through said water. In which case the 4Runner TRD Pro instantly transforms you from an exclusive “sports car groupie” to a penitent “why did it take me so long to discover the joys of off roading?” disciple. 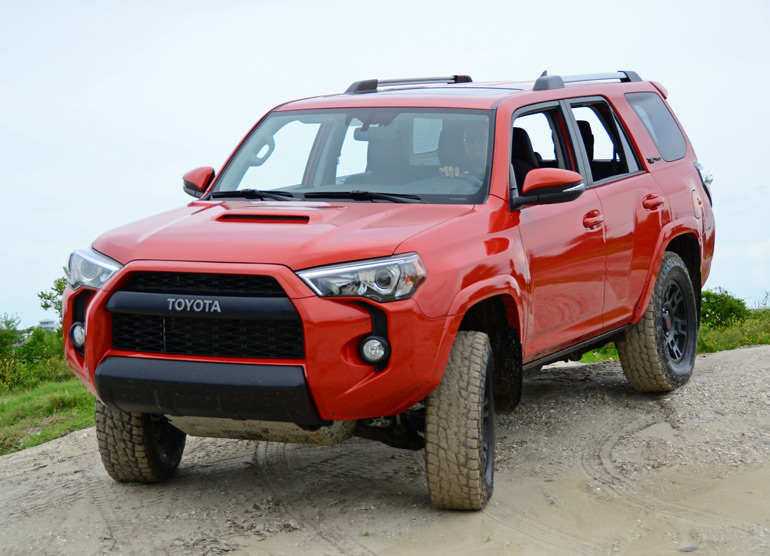 If there is a chance that I can add the 2015 Toyota 4Runner TRD Pro to my garage, I will. It is that fun. I recently spent a week behind the wheel of a $100k plus Range Rover Sport and I can honestly say that if Toyota can sell this thing loaded out the way I had it for less than $45k, I am in. It is most of what the Rover is for less than half the price.