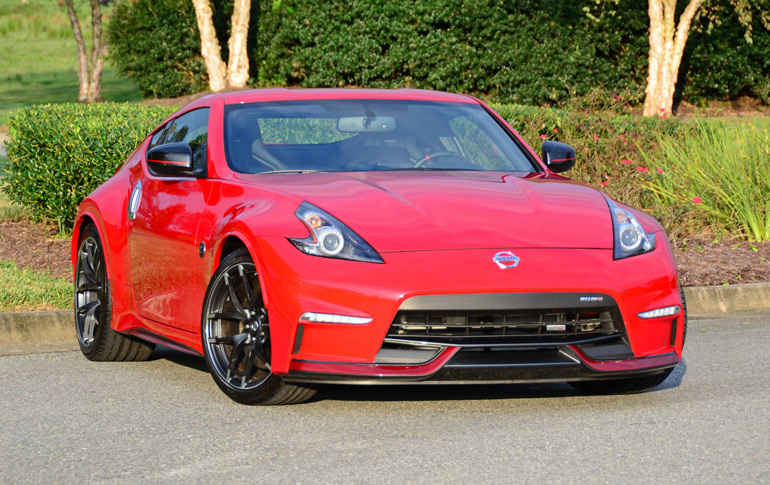 I think I will always have a soft spot in my heart for Japanese sports cars. With that said, the latest Nissan 370Z NISMO has captivated me in a way that has me seeking other vehicles within the brand that garnish the aggressive styling that the proudly worn NISMO badge has brought to the forefront.

Getting a refreshed design for the 2015 model year, the Nissan 370Z NISMO inspires a broader scope of enthusiasts now that the exclusive NISMO Z is available with an optional automatic transmission. From its initial conception in 2009 up to 2014, all 370Z NISMOs were equipped with a 6-speed manual transmission with Nissan’s advanced SyncroRev Match system, which still comes as standard equipment in the 2015 model. Digging into the parts bin, Nissan conjured up their proven 7-speed automatic transmission to equip it in the more-powerful 370Z NISMO. Outside of the new transmission offering, the 2015 Nissan 370Z NISMO receives new exterior styling. 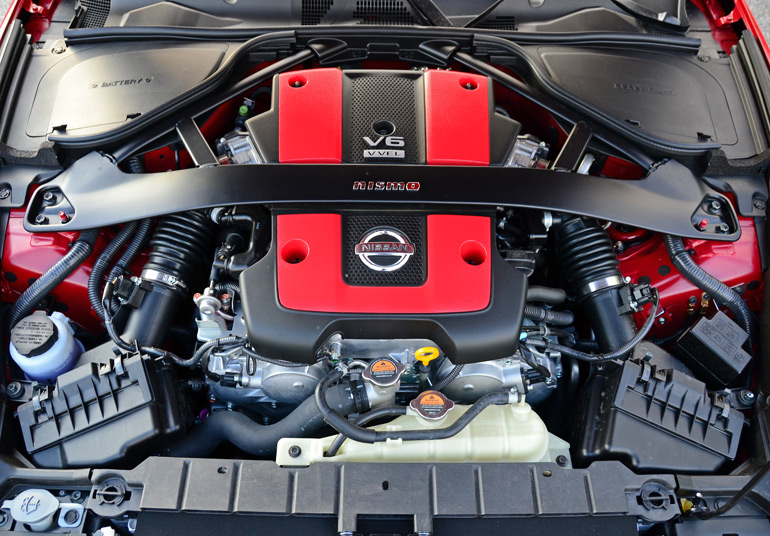 The powertrain of the 2015 Nissan 370Z NISMO remains mostly the same with its highly praised 3.7-liter V6 engine producing 350 horsepower and 276 lb-ft of torque, which is 18 horsepower and 7 lb-ft more than the standard 370Z Coupe. My test car arrived equipped with the 7-speed automatic transmission and, naturally, I had diminished expectations. Surprisingly, I was taken away with the improved straight-line driving dynamics of the automatic unit over the many manual transmission 370Z NISMO vehicles I have driven over the years. With the new 2015 370Z NISMO’s 7-speed automatic, it makes for a good match to seamlessly transmit power to the rear wheels going through each gear. Fuel consumption returns a respectable 19 mpg city, 26 mpg highway and 21 mpg combined. I occasionally saw highway figure as high as 27.3 mpg traveling at a consistent 70 mph. Not too bad for Z-sports car! 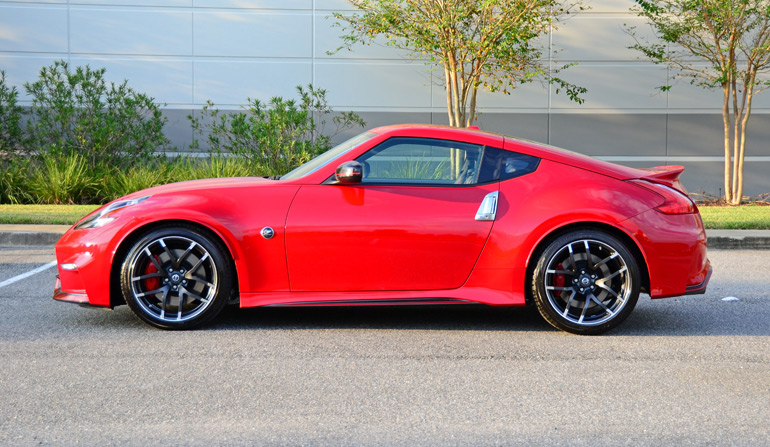 As a die-hard manual transmission fan, I conversely say that this automatic transmission and 350-horsepower V6 combination is quite the performer, grasping at a potentially faster straight-line acceleration over the manual NISMO Z. Shifts are quick and lands the VQ-series V6 engine in an optimal rpm range through 3rd gear for a nearly 5-second-flat run to 60 mph. Previous versions of the NISMO Z with the 6-speed manual have clocked around 5.3 seconds to 60 mph. No need to really argue much about the automatic transmission’s advantages here, unless of course other you want to consider the fun factor of the 6-speed manual. Both have their obvious advantages, and for the 2015 Nissan 370Z NISMO, you can have it your way…just like that fast food place. 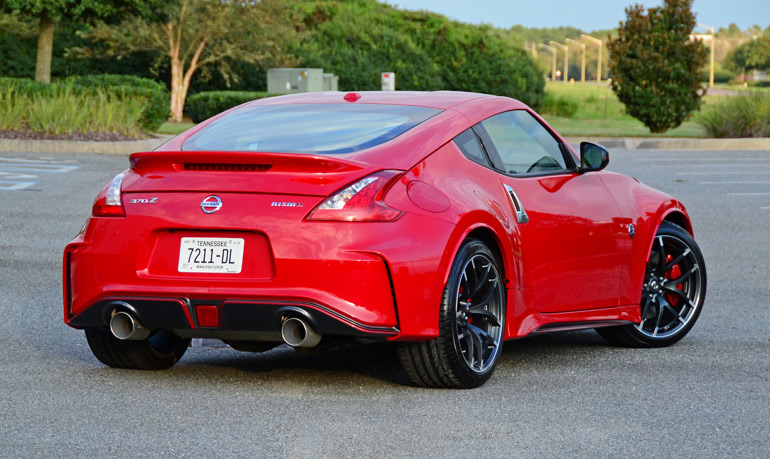 Nissan’s approach to take a good thing in their current Z car and make it better is starting to come clear to a sharp-looking picture, literally. In that sense, the new 2015 Nissan 370Z NISMO’s biggest changes remain to be is exterior, with a few interior updates. The new exterior still features much of that Z character we all have grown to adorn for the past 5 years, but now the NISMO Z gets a styling that closely mimics its NISMO-line counterparts, such as the Juke NISMO and GT-R NISMO. Aside from the Red paint color of my test car, RED seems to take a front seat in the NISMO appeal with the outlining body kit panels featuring a red trim. Not only are the front and rear bumpers restyled, but they remain functional to direct air where it is needed for cooling and aerodynamics. Even the rear bumper’s sills are functional for relieving wheel well pressure along with the rear diffuser and lower-stanced spoiler (when compared to previous year NISMO Zs) all aid in the downforce department. Also adding to the exterior appeal, all-new for 2015, the Nissan 370Z NISMO gets LED day-time running lights up front and darkened yet restyled headlight enclosures. New charcoal-colored 19-inch Rays forged aluminum wheels in their staggered proportions get wrapped in 245/40/19 rubber up front and 285/35/19 out back – quite the decent sized meat to keep just over 3,300 pounds on track. Just like previous year 370Z NISMO, bringing things to a slower speed or a full stop is at the task of 4 piston calipers up front and 2 piston rears biting down on solid ventilated rotors. 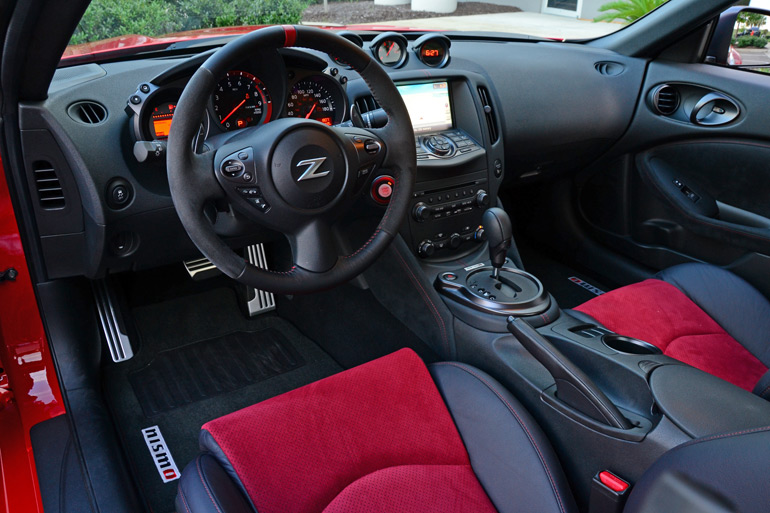 The interior of the 2015 Nissan 370Z NISMO gets a few updates with new climate controls, an updated steering wheel with leather and alcantara trim, and heavily-bolstered RECARO seats that feature leather appointments and an alcantara red accent for the inserts. Having the tech-packaged and automatic transmission-equipped NISMO Z, my test vehicle comes with the GPS navigation system integrated into the central LCD color touch screen for display of all audio and infotainment controls with the addition of the standard review backup camera. The clear and concise-sounding Bose audio system features a total of 8 speakers including 2 subwoofers that you can really feel through the cabin without unwanted vibrations or dull sounds. The audio system includes a USB connection, AM/FM, SiriusXM radio, AUX-in, CD player and Bluetooth audio streaming. The instrumentation of the gauge clusters remain the same featuring the red NISMO rpm tachometer, digital matrix fuel and coolant temp displays, and the traditional 3-pod gauges for oil temp, voltage and a digital clock. 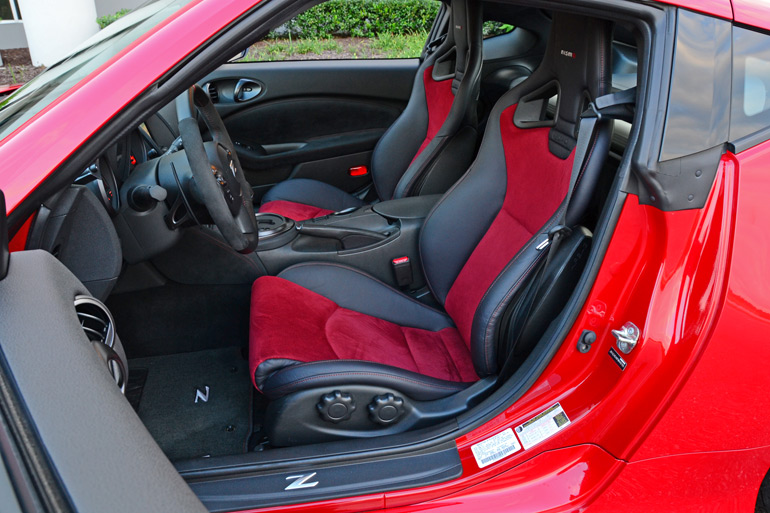 Nissan’s expression of their Z sports car keeps things moving in a direct forward momentum. The road hugging handling characteristics of the 370Z NISMO really set it apart from the crowd, as it proves to be a stiff and track-endearing ride. For those who wish to commute daily in the 370Z NISMO, you will want to have a good chiropractor as the suspension tends to be a bit jarring at times. Most of those jarring and stiff rebound aspects of the suspension pay homage to the Z’s athleticism, exhibiting a high level of handling, one that begs you to disable traction and stability control at the quick-press of a button upon your entry onto a local track. Doing so, will enable you to let the rear end kick out only requiring minimal effort to keep things balanced – mostly due to the chassis’ 53% front and 47% rear weight distribution. Pushing the 370Z NISMO to triple digit speeds on a track (or closed road) while slowing for bends for turn-in is a nicely balanced act. Even the hydraulic steering rack is firm enough with just the right feedback to properly navigate narrow paved surfaces. 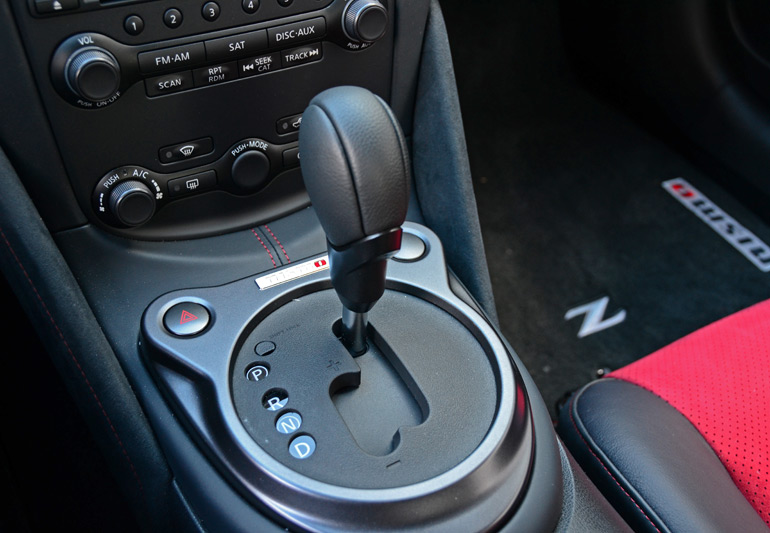 Rounding off what the 2015 Nissan 370Z NISMO has to offer, its two-seater proportions are quite the fit for enthusiasts who do not mind giving up some practicality for a true sports car proudly wearing its Z badges. In terms of value, the 370Z NISMO, now having some of the tech equipment of the high-trimmed Zs and automatic transmission option, comes at an as-tested $47,725 including a $810 destination charge. As equipped, the 2015 370Z NISMO with tech and automatic transmission feature sets avoids any additional add-on options and comes nicely appointed with many features considered as available options on other Z trim levels. 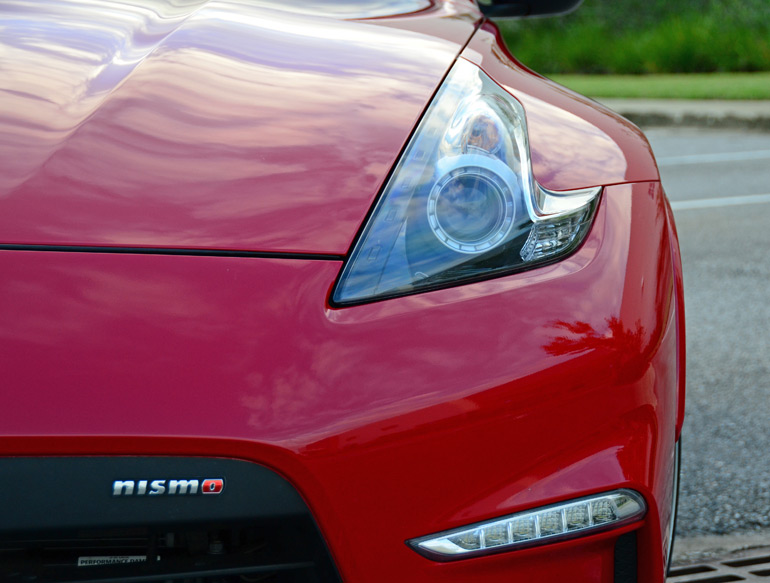 It appears that the Nissan Z is still alive and thriving as a thrill ride. Now, it gains additional attention from a wider spectrum with the availability of an automatic transmission in the performance-oriented NISMO version.