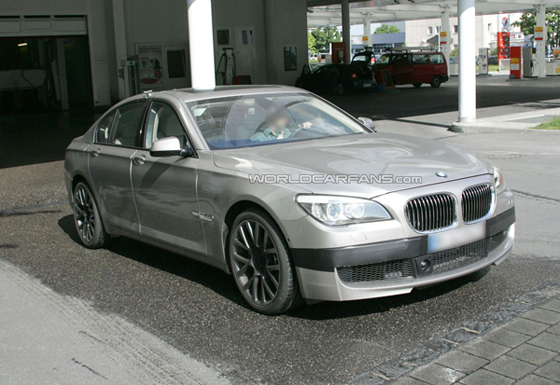 It seems almost every other month BMW is pumping out a new M version of their latest lineup. The last M Motorsports car to come out of the mix was the X5M and X6M. Now we have the pleasure of unleashing the M-Beast out of the big baller-status 7-Series. That is right, you heard that correctly, BMW might have a M7!

The first spy photos, grabbed from Worldcarfans.com, reveal an M version of the 7-series. The styling is in “design-test” condition right now but you can only imagine what the finished product may look like from the spy shots. You can even see the “power dome” on the hood reminiscent of the E46 and E90/E92 M3.

It is speculated that the BMW M7 will have an engine surpassing the 760i’s 6.0-liter V12 engine with 544hp. That means this mammoth will something north of 600hp pushing it around the nurburgring up against the Benz S63 AMG, S65 AMG, Jaguar XJR and others in this high-status class.

We may be witnessing what is to come for the fastest luxury sedan to come out of an assembly line. WE shall see about that!