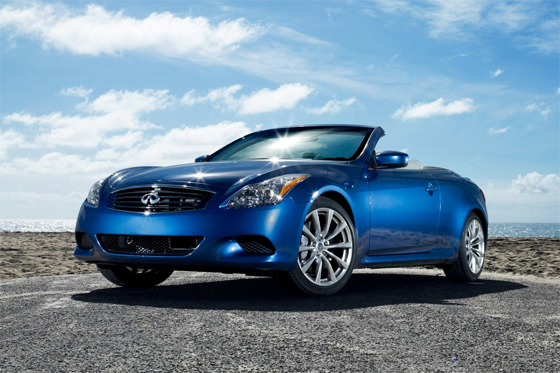 I do not know what is so special about these new sports coupe convertibles all sporting a folding/retractable hard-top but they are making a big splash among the “convertible-lovers”.

Gone are the old days of leaky convertible roofs or the drive-by thief cutting a hole in your vinyl roof. These things are almost as good as a coupe. Some of them are even built as a convertible and not the hack-off-the-roof design that decreases body integrity or alters structure rigidity to the point of the vehicle not having many characteristics of its coupe sister. Not to mention, the weight gain that many convertibles have been criticized of over many years.

The new Infiniti G37 Convertible is something that is somewhat unexpected. I mean, a G35 or G37 that is a convertible? The G has been out for over 7 years now and they never mentioned having a convertible nor did many people ask for one. BMW had it. I guess if anyone wanted a convertible they knew where to look, the BMW dealership.

The new Infiniti G37 Convertible is a good performer. For the starting price of $43,850 you get what you pay for and a bit extra. Considering the BMW 328i Convertible starts out at $44,550 you have an edge over the competition hands-down in the performance arena. The Infiniti G37 Convertible has a 6speed manual standard with 325 horse power and 267 lb-ft of torque from its infamous VQ series 3.7-liter V6. The Convertible model tips in only 465 pounds more than the coupe version. If you are shopping for one of these topless hotties, you have your work cut out for you in making a sound decision. They are all very very nice!