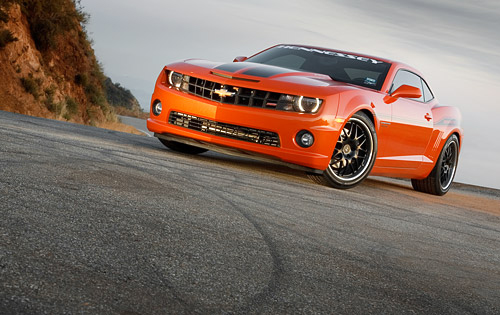 With the new Chevrolet Camaro hitting the streets of America, it is only a matter of time that you see one pull up in your rearview mirror and then blaze past you with a faint exhaust note trailing the transformer looking rear-end. Now if you are privileged to see a tuned new Camaro then we suggest you break out a camera and get some exclusive images because you are still hard-pressed to find a modded 2010 Camaro. Speaking of a modded Camaro, Inside Line recently tested the 2010 Hennessey HPE550 Supercharged Chevy Camaro SS.

One of the very first blown 2010 Camaro’s to hit the road, the 2010 Hennessey HPE550 Supercharged Chevy Camaro SS is nothing short of a beast. With a BDS 10-71 supercharger slapped on the big Chevy V8 found in the new Camaro SS makes for a seriously badass car.

Hennessey Performance Engineering (HPE) didn’t mess around when it comes to “improving” this Camaro SS. With only 6 pounds of boost pumping through the 6.2-liter LS3 V8, it is able to crank out 559hp at the wheels. Remember, the stock Camaro SS only puts out 426 horsepower, and that is to the crank. That would come out to around 702 hp at the crank if you factor in a 20 percent drivetain loss. I am sure the Chevy drivetrain is a bit more efficient than that, but for kicks-and-giggles, let’s call this one “close” to 700hp at the crank.

So how does a supercharged Hennessey HPE550 Chevy Camaro SS perform? Thought you would never ask! At the test track, Inside Line was able to hit 60mhp from a standstill in 4.3 seconds and run a full ¼ mile in 12.1 seconds at 120.1mph. On the skidpad the Hennessey HPE550 Camaro SS was sort of a let-down pulling a just below stock 0.87g skid-pad figure. A stock Camaro SS pulls 0.88g’s with an almost identical slalom speed at 68.6 mph versus the Hennessey version at 68.7 mph.

Okay, so you wont be able to run rings around your friends modded BMW on the race course, but you might be able to open a can of woop-ass on the drag strip!

For $62,500 total price for the vehicle in the HPE550 form, which is $24,950 on top of stock price, it may be a decent deal considering it is hard to find something in this power-range for the price. Basically, you get a rock-solid Hennessey tuned and blown Camaro SS that is a true head turner and no slouch on the strip. You be the judge!