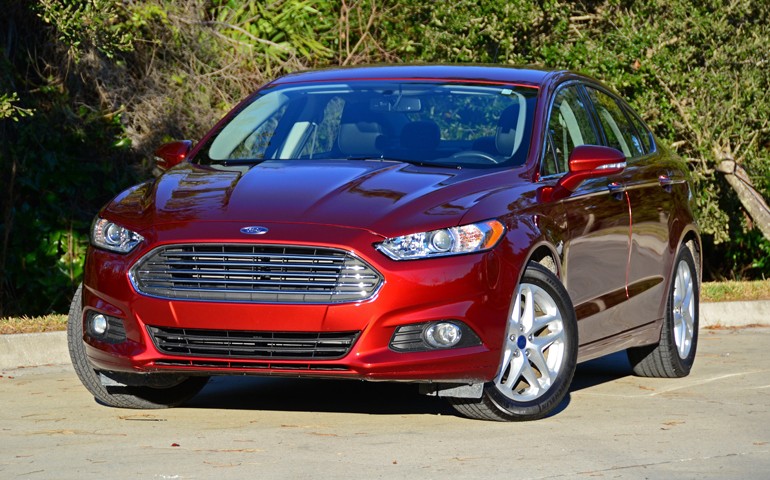 Continuing its new design first introduced as a 2013 model, the 2015 Ford Fusion carries a contemporary style signifying a consistent contender in the midsized sedan segment. As sales figures will tell a lot, the Ford Fusion is a major force for the automotive market falling in line right behind the front-runners, the Toyota Camry and Honda Accord. 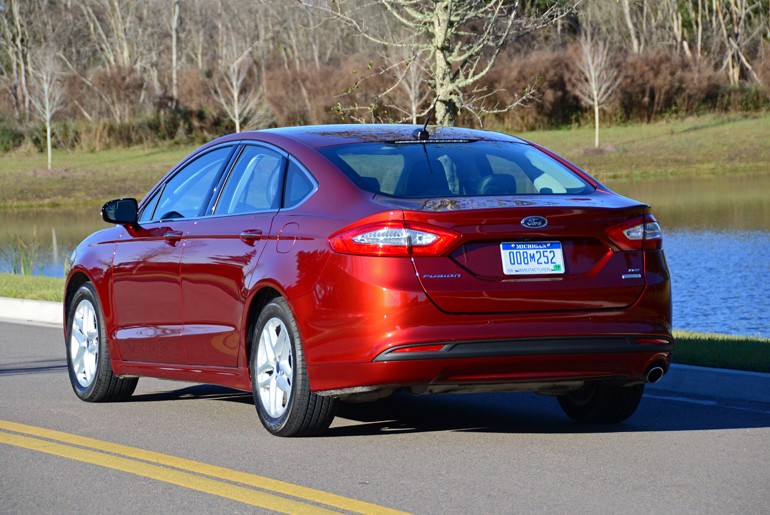 Testing from 0 to 60 mph, my Ford Fusion SE with the 1.5-liter EcoBoost engine mated to a 6-speed automatic transmission muddles along taking just over 8 seconds. As I find this to be a subpar performer for its class, the new Fusion SE 1.5-liter EcoBoost remains to be quite efficient and scoots along with just enough power to not get in the way of itself. Of course, you will expect to greatly improve those figures by optioning for the 2.0-liter EcoBoost engine without sacrificing much in the EPA mpg estimates. 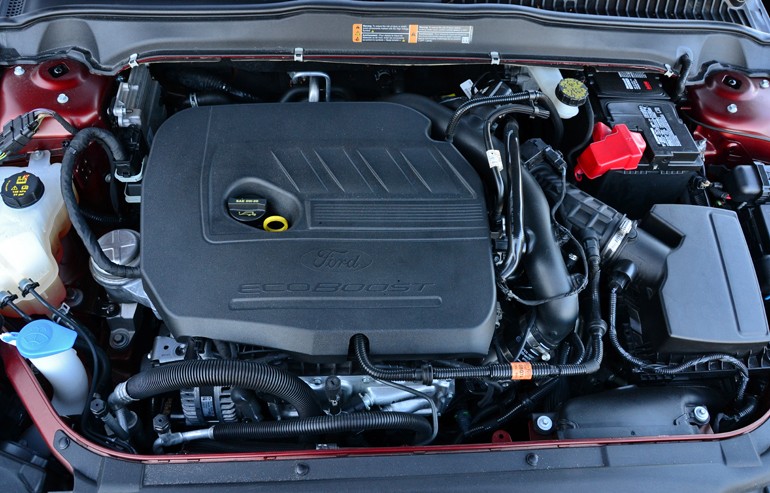 Fundamentally, the new Fusion SE 1.5-liter EcoBoost is for those who want decent transportation with a little extra stability in the way it drives over comparable vehicles like the 4-cylinder Toyota Camry. To boot, the new Fusion SE 1.5 EcoBoost gets amazing fuel economy, an EPA estimated 25 mpg city and 37 mpg highway. I saw a steady figure of 34.2 mpg on a trip consisting of mostly highway driving and some mixed inner city travels.

The new Ford Fusion SE 1.5-liter EcoBoost proves to have just enough content in its optional equipment group lists to place it on a level playing field with its direct competition. Not to mention, you have the added benefits of excellent fuel economy. With the start-stop feature, a $295 option, efficiency is spared in a delicate fashion where the system will stop the engine when it reaches a stop but fires back up with any change in climate settings or accessory items that use additional power, such as the heated seats. However, the feature is able to muster out an additional 1 mpg over the 1.5-liter EcoBoost without the start-stop feature where it would normally get 24 mpg city and 36 mpg highway. 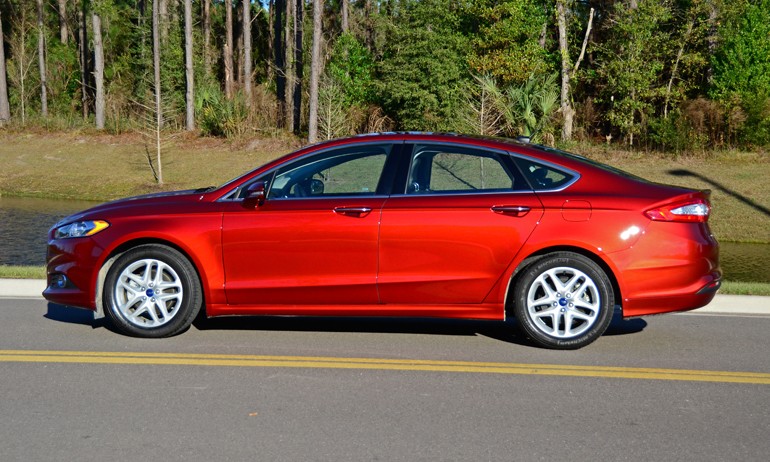 In driving the new Ford Fusion SE it is refreshing that it has a compliant ride and nothing really to nitpick over with its handling and maneuvering. Additionally, handling seems to be a step above its competition within the area of comparable 4-cylinder-powered midsized vehicles. The Fusion pulls off an exceptional balance of sport and comfort in its suspension system as it does with a slight amount of feedback from the electric steering rack. 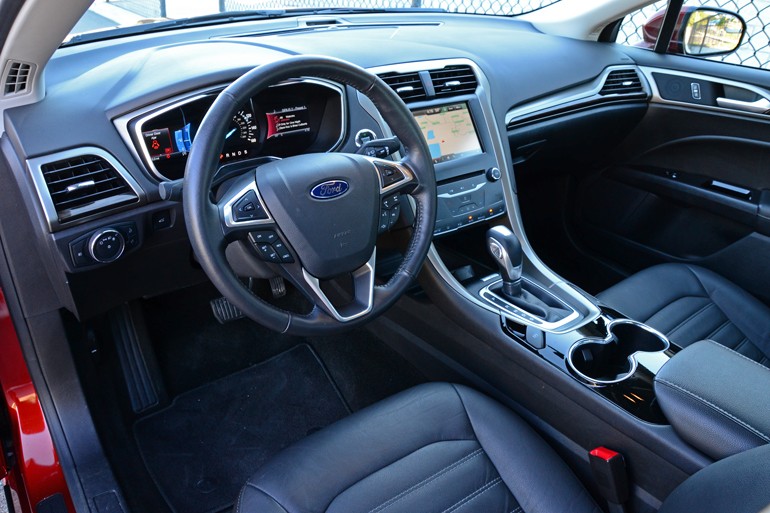 Looking past the lackluster straight-line performance, the Fusion SE 1.5 EcoBoost has a simplistic approach to its design, ergonomics and value. Maintaining a steady highway speed never seems like an issue, as there is still enough oomph to overtake at any legal speed. Still, the Fusion SE’s 1.5-liter EcoBoost engine and 6-speed auto transmission adapts to quietly buzz its way near redline until the job at hand is completed. Cabin noise, even during such occasions, is never overly intrusive, a slightly less volume than its competition.

The interior of the new Ford Fusion SE 1.5 EcoBoost attempts to have a little more character than other mid-trimmed mid-sized sedans but comes up short, drowning in a monotone theme.

Having the optional MyFord Touch package, incorporating the latest Sync infotainment LCD touch screen, GPS navigation and configurable information sections of the gauge cluster, the interior content exudes a bit of flare. Moreover, a hint of a luxurious feel comes into play with the minimal wood trim and soft leather seats as part of the optional SE Luxury package equipped on my test vehicle. 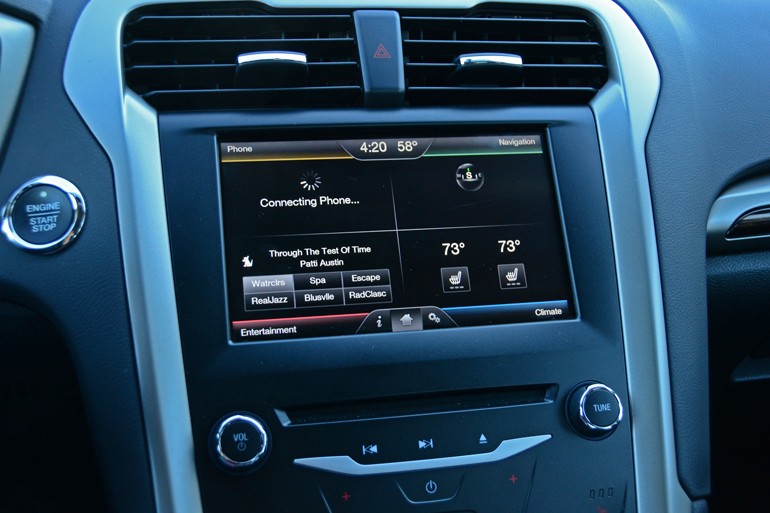 The MyFord Touch system, using several capacitive buttons, is almost an acquired taste for some controlling the climate system, heated seats and audio track settings. The use of physical turn-knobs for audio volume and toggle is wise. The quirks of the system through the touch screen, although using a high resolution display, can be a bit cumbersome. Though, the latest version through many updates over the previous years of this generation’s MyFord Touch has improved responsiveness of the system. 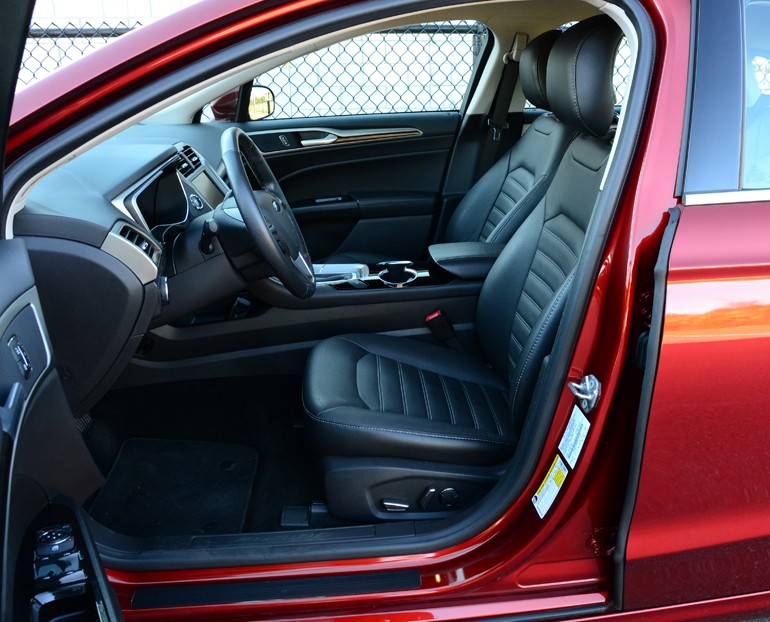 Seating positions up front do take a while to find the optimal adjustment by way of the power heated seats due to how the cabin wraps around the driver and front passenger. Out back the rear seating has plentiful leg room, well enough for those over 6 feet tall. However, occupants well over 6 feet tall will need to be mindful of limited headroom where the coupe-like roof line tends to sap some of the space. Cargo room in the trunk is copious but requires items to slide in vertically instead of being dropped in as the trunk lid top seems a bit shallow from the aggressively raked rear window. 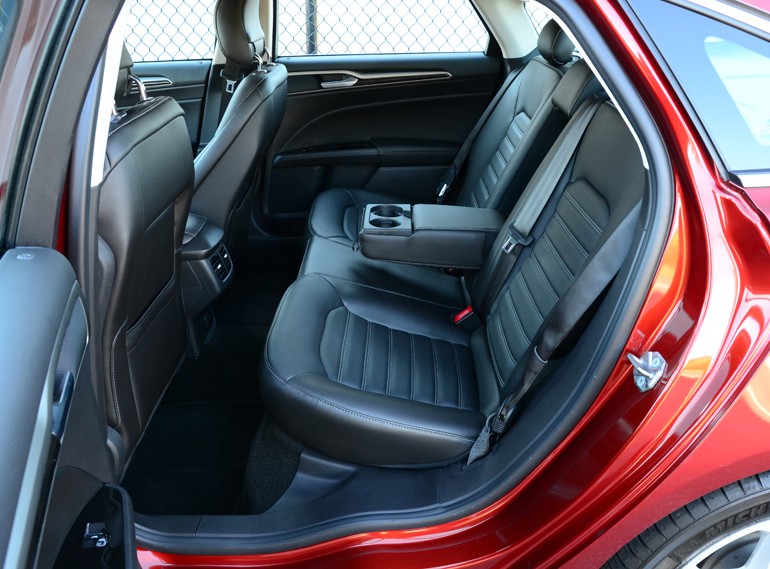 With a wide variety of feature sets and options available, the new Ford Fusion SE is an appealing purchase that attempts to sooth the vast consumer base looking to volume-selling mid-sized sedans. My 2015 Ford Fusion SE 1.5-liter EcoBoost captured many of the highly desired features in its two options packages with several other equipment options, such as the start-stop system, navigation system, push-button start w/ intelligent access (touch-unlock/lock on all 4 doors with standard driver’s door keypad), and rear inflatable seatbelts (integrated airbag into the rear outboard seat belts). With the two option packages, SE Luxury Package and SE Tech/MyFord Touch Package, the as-tested price of my Fusion SE 1.5 EcoBoost comes to $30,305 including an $825 destination and delivery charge. The base pricing for the new Fusion SE remains at a respectable $23,935 while the base Fusion S starts at just $22,010, quite the value-centric contender in such a competitive segment.