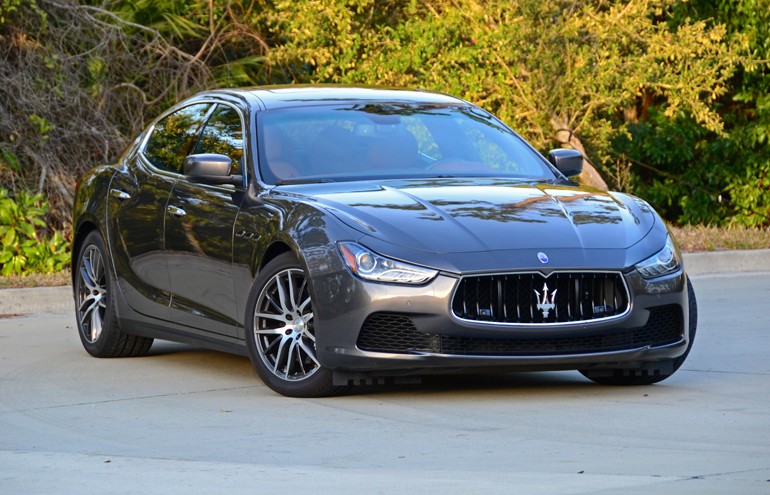 I have always considered myself to be a rather conservative person when it comes to my choice in vehicles. Even my BMW M3 happens to be Silver, which somewhat blends into the background to the everyday Joe when it comes to a vehicle color. For enthusiasts such a vehicle deserves plenty of attention, and rightfully so considering its prominence in being performance-oriented vehicle. The same can be said with Maserati vehicles, as they have reestablished a presence with vehicles like the new Ghibli, their midsized performance luxury sedan eager to compete with the likings of Mercedes-Benz, BMW, and other luxury manufacturers. 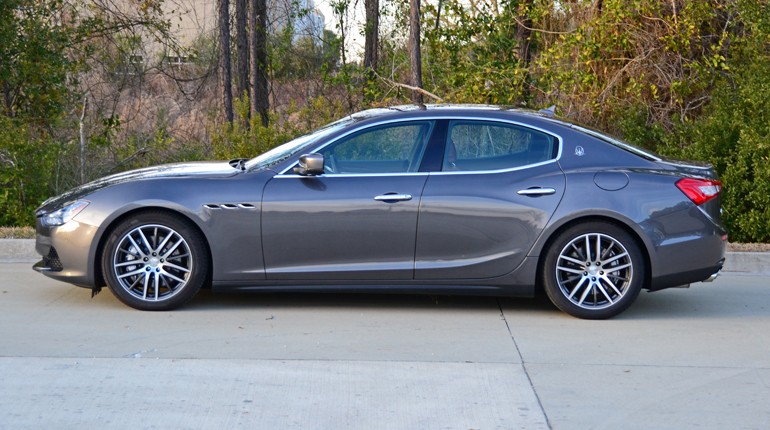 The 2015 Maserati Ghibli, remaining mostly unchanged from its introduction in 2014, brings back a classic name for the brand. This time it is wrapped in a luxury-appointed 4-door package instead of a coupe or convertible. Having spent a good amount of time behind the wheel of the Maserati Ghibli, my take away has a strong signification in how onlookers perceive the car. Basically, the majority of our lovely public have wide-open googling eyes as they see the Ghibli roll by them with a clattering turbo wastegate pulsating their ears from the twin-turbo V6 found in my S Q4-trimmed test vehicle. The engine, an Italian hand-built Ferrari-inspired marvel, is at the heart of the Ghibli pumping 404 angry horsepower and 406 lb-ft of torque to all four wheels. The all-wheel-drive system is a change in pace from the expected featuring a multi-plate wet clutch to engage electronically and distribute power through its off-set propshafts splitting up to 50% between the front and rears. 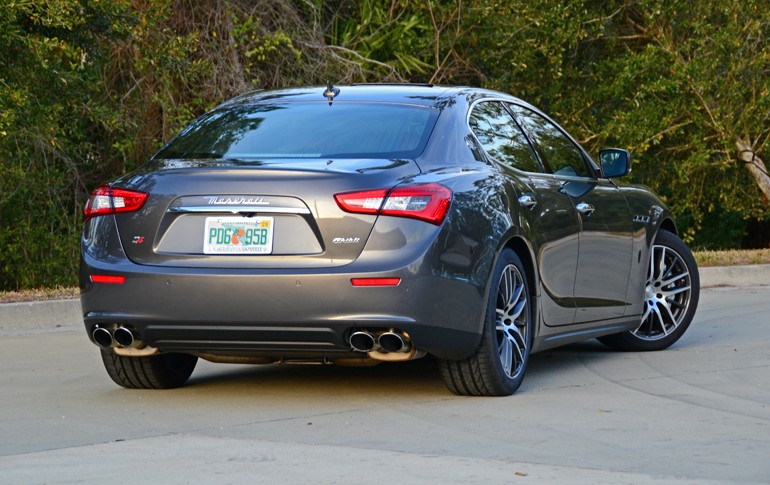 On the driving front the Maserati Ghibli is a joy to pilot around town and get many giggle-inducing sounds from its aggressively tuned exhaust by way of what the S Q4 top-level trim and optional Sport Package brings to the table. The initial bite of the Ghibli is followed through by small notches within turns at low speeds from the all-wheel-drive system attempting to send as much as 50% of its power to the front wheels. After getting things moving, the turbos spool up to emit a delightful surge keeping the forward momentum building to reach 60 mph in just 4.8 seconds. 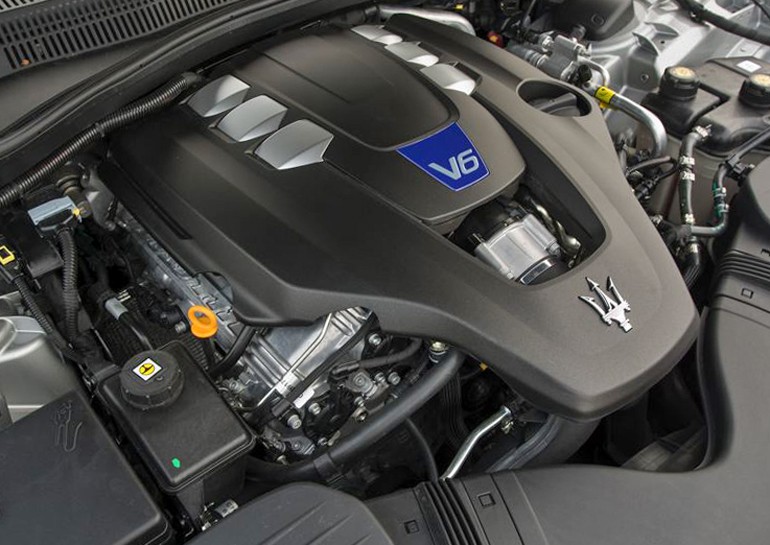 The 8 speed automatic transmission mated to the twin-turbo V6 does its job to keep the engine at bay for optimal power. Being that the transmission is a ZF-sourced unit, a prominent force in building excellent gear boxes, shifts come quickly and there is hardly ever any hunting for gears when in normal drive mode. In sport mode, things get spicy with the exhaust opening up an internal flap to allow extra breathing but at the cost of some added decibels with a unique exhaust note entering into the cabin. The sound of the exhaust, mostly deliberating for enthusiasts like me, can be a bit of a droning annoyance for other passengers while they get to bask in the glory of a luxury laced interior with soft-touch surfaces in just about every facet of the cabin. The Ghibli is far from a quiet and tamed cruiser, it is more of a rolling statement that makes its presence known while it initially turns heads just from the curiosity it sparks among onlookers. 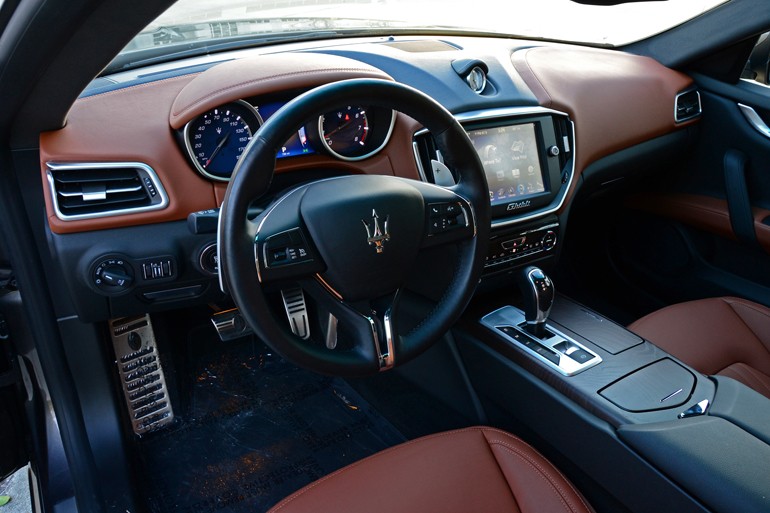 The interior of the Maserati Ghibli could be a tranquil getaway until the engine fires and the sounds of the clattering exhaust fills the cabin. Many of the controls and feature sets, mostly borrowed from Chrysler vehicles, including the latest 8.4-inch high-resolution touch-screen Uconnect infotainment system, still find their well-placed position in the Ghibli’s cabin not to cause much fuss of those who don’t know any better. Possibly, some of the integration of Chrysler’s control sets diminish the luxury appeal of the Ghibli to a point considering how stylish and appealing the exterior is. However, most of this can be easily overshadowed by the sum of the Ghibli’s leather appointments and contrasting interior trim. Not to mention, Chrysler’s highly praised and touted infotainment system is among the best in the business – so all can be forgiven with the updated menu set colors and Maserati logo placements. 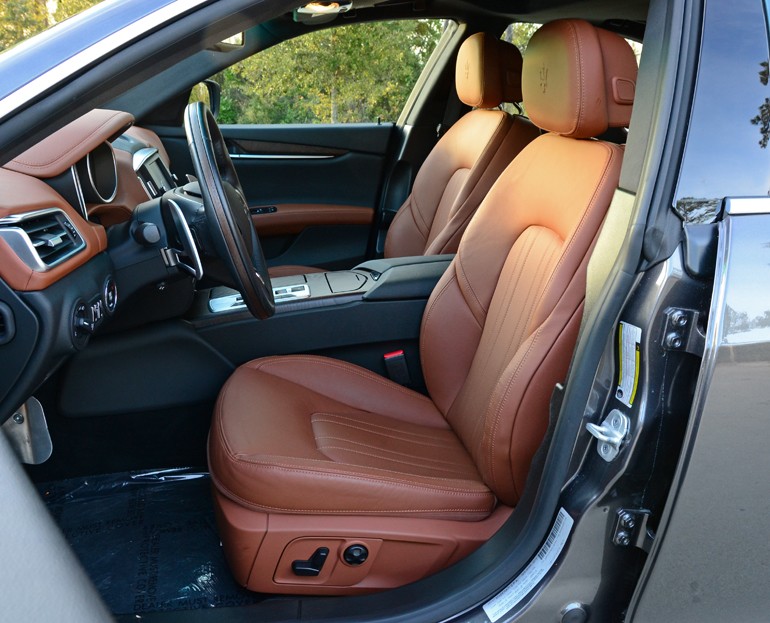 The Maserati Ghibli is certainly a driver’s car with the only discernment being its hydraulic steering rack that lacks much feedback. To add insult to injury, the steering wheel seems a bit oversized for the duties of the 4,124 pound 4-door Italian screamer. On the efficiency side, the EPA fuel estimates come in at 15 mpg city and 25 mpg highway. I saw a consistent 25.4 mpg on the highway and a steady 16.1 mpg around town after my flogging adventures came down to a respectable and lawful pace. Ride quality while hitting those numbers seems to suffer slightly, possibly due to the sport package’s aggressive damper and spring rates. The beefy 19-inch 245/45 front and 275/40 rear Pirelli P-Zero performance tires are another attribute to the Ghibli’s sport-sided ride quality, probably something enthusiasts will appreciate.

Maserati is still an unknown automotive source that many have no clue as to where you would place such a vehicle on the automotive food chain other than on high-reaching pedestal that they can never touch. Conversely, Maserati’s are somewhat attainable with prices starting at just $69,800 for the base trim. Moreover, there are Maserati dealerships popping up all over large cities, as is the one local to me in my hometown of Jacksonville, FL. 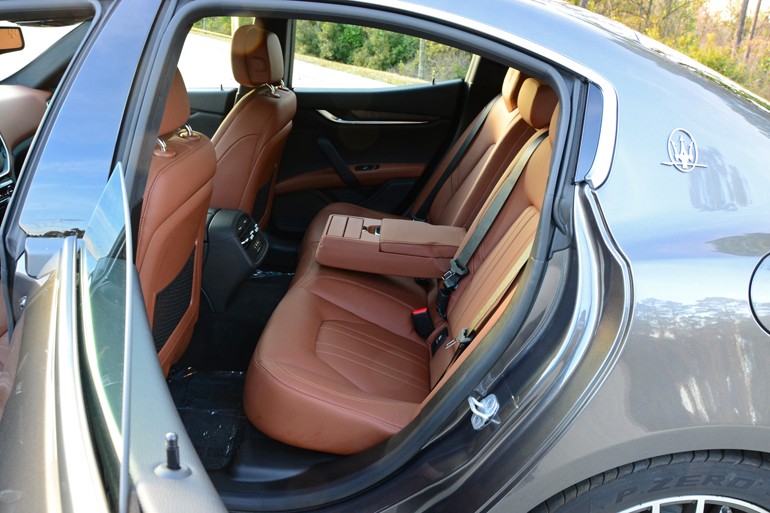 The vehicle choice for my test drive adventure is loaded up with several options within the top-level S Q4 trim, which adds a more powerful twin-turbo V6 engine (404 horsepower) to the equation where otherwise the base Ghibli has 345 horsepower. Moreover, the brakes on the Ghibli S Q4 are massively-sized 6-piston calipers up front 4-piston rears all biting down on cross-drilled rotors. The totality of what the Maserati Ghibli S Q4 represents is a major statement of class and prestige with a performance edge. For that you will be required to submit the price of about $89,450 for admission to this luxury-laced thrill ride.

If you are in the market for something luxurious with an aggressively sporty attitude that stands out from the normal luxury crowd, be sure to Google the closest Maserati dealership, you may be surprised to find one within a 30 minutes to an hour’s drive. For those local to the Jacksonville area, be sure to give our friends at Maserati of Jacksonville, FL (877) 858-9448 a chance to demonstrate what a new Maserati Ghibli is all about.