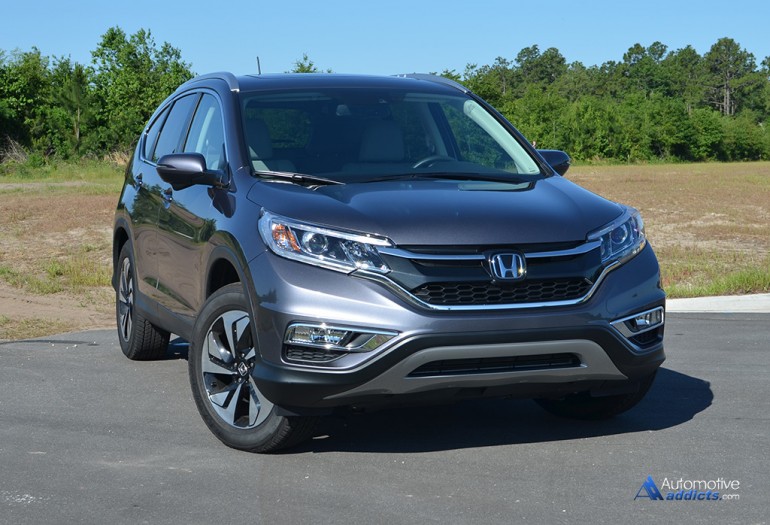 Honda’s task of redefining their crossover and SUV segment is evident in a the forward movement with of the latest styling refresh for the new 2015 CR-V. With a long lineage of the CR-V being a go-to for those who want something outside of the interior proportion boundaries of a Civic, the CR-V has been a strong force to console such buyers. For the 2015 model year, the CR-V gets some new styling updates, a new engine taken from its Accord sibling mated to a CVT transmission, and additional feature sets including some welcomed active safety options. 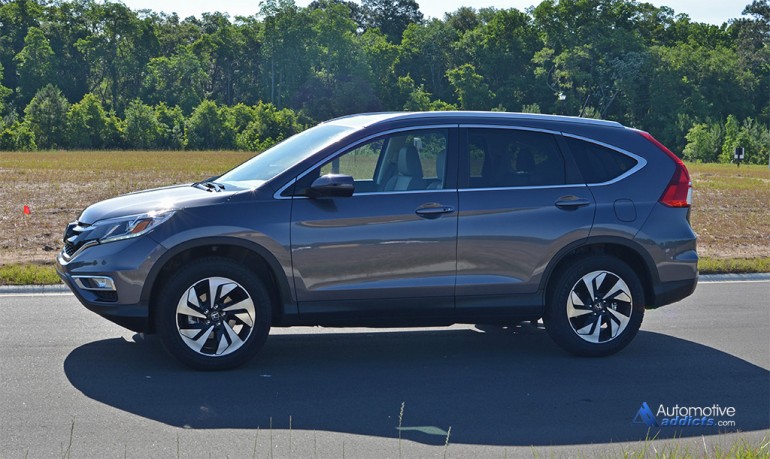 At one time, I frowned upon the Honda CR-V leaving those thoughts resting on what I would imagine a Honda Civic would consist of sitting on a lifted suspension and a taller wagon-like roofline. While some at the time of the CR-V’s infancy would agree with my thoughts, the latest iteration of the CR-V has left any and all of that connotation far behind, and for good reason. With the fourth generation of the CR-V receiving some cycle updates, it is proof of Honda’s willingness to keep things fresh and moving in the right direction for a small crossover segment that is growing by leaps and bounds.

The changes for the 2015 Honda CR-V nearly characterizes a new generation redesign with updated exterior lines starting with its headlights and LED daytime running lights moving through the new grill and restyled wheels. With the exterior update casting much of a shadow on the fourth generation from 2012 to 2014 model years, the 2015 CR-V appears to depart from its current generation featuring more of a premium character. All of this is a good thing, in case you are wondering. 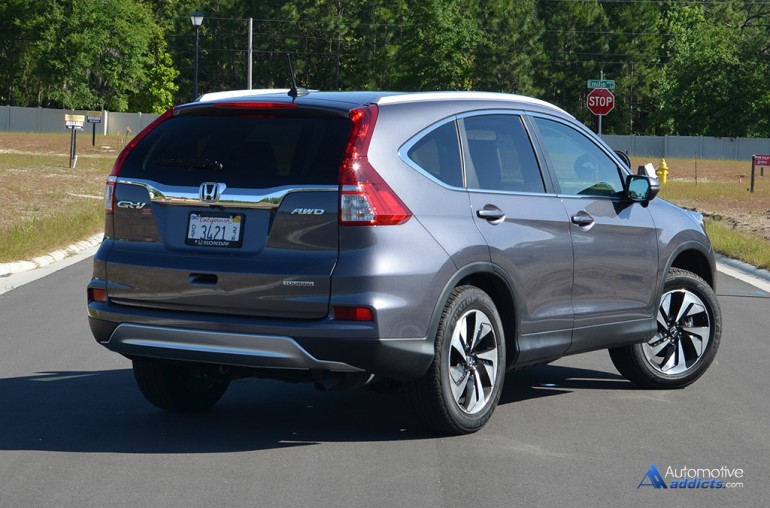 Apart from the exterior updates, the CR-V, most importantly, gets the Honda Accord’s direct-injection 2.4-liter 4-cylinder engine. The engine, producing 185 horsepower at 6,400 rpm and 181 lb-ft of torque at 3,600 rpm, is mated to a CVT (Continuously Variable Transmission). With the new transplant, the new 2015 CR-V scoots along with some slight zippy traits but nothing to the tune of being brisk. Additionally, the new engine remains efficient even with the benefit of its small torque output bump over the outgoing powertrain. EPA estimates for my 2015 Honda CR-V AWD Touring test vehicle come in at 26 mpg city, 33 mpg highway and 28 mpg combined, all quite efficient numbers considering the growing size of the CR-V being nearly the proportions of a midsized crossover vehicle.

Use of the new CVT for a gearless experience, seems to sap some of the fun that the new 2015 CR-V could have exhibited on the road but benefits to obtain its EPA fuel consumption numbers on a consistent basis. My discernment of the new CR-V’s lack of low-end grunt is an expected part of Honda’s car-based crossover utility vehicle. Though, extracting the buzzing acceleration to get things moving with the speed of interstate traffic requires the engine to spin near redline and hold its high tone at the CVT unit’s desire until a proper speed is reached. Basically, the 2015 Honda CR-V’s CVT transmission allows the 2.4-liter 4-cylinder to spin just below redline to transmit every bit of power it can muster out to the four wheels of my CR-V AWD Touring test vehicle in a high-pitch succession. In this effort, the CR-V AWD Touring will reach 60 mph in 8.8 seconds, slightly ahead of some of its similarly-equipped direct competition. 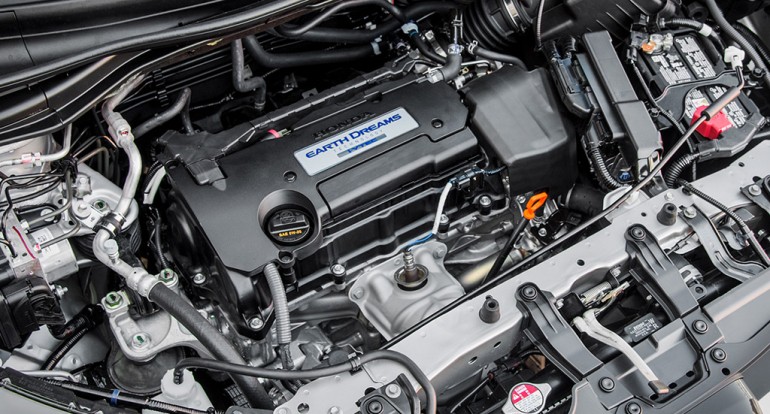 The engine noise in the new 2015 CR-V is kept at a lower tone from idle up to mid-throttle. Anything above, it seems as if the direct-injection 4-cylinder’s i-VTEC profile and nearly 6,400 rpm spin is indicative to emitting a bit of extra noise in the cabin – somewhat of a tolerable summit if it isn’t repeated over and over. 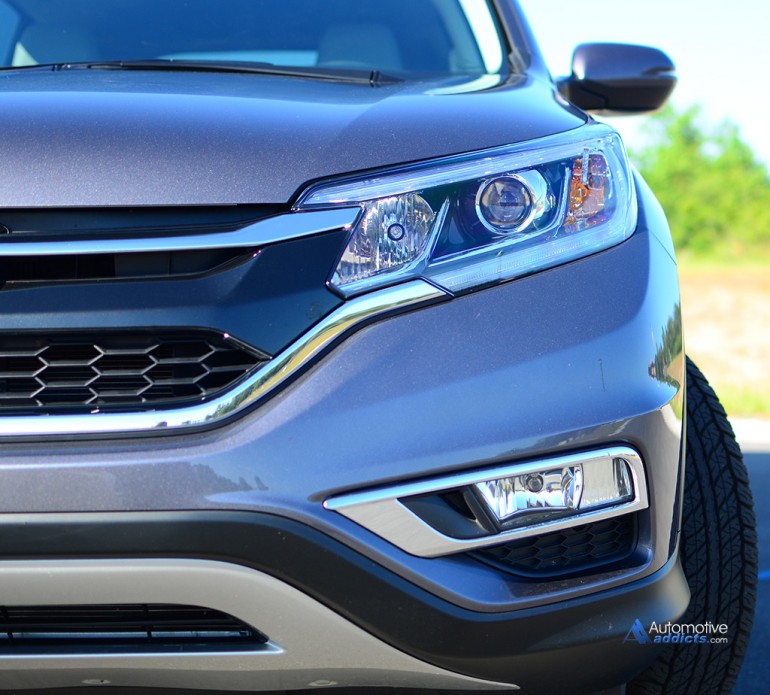 Overall, the performance of the 2015 Honda CR-V is decent enough to keep the driver satisfied and assured in most situations within legal boundaries on the road. Moreover, the all-wheel-drive system adds a bit of stability to keep the wheels planted when powering out of turns in inclement weather, and, as I suspect, on snow-covered roads. Folks up north will welcome my 2015 Honda CR-V’s AWD Touring trim level, a desirable choice to cope with the potential onset of snowstorms in those northern states. 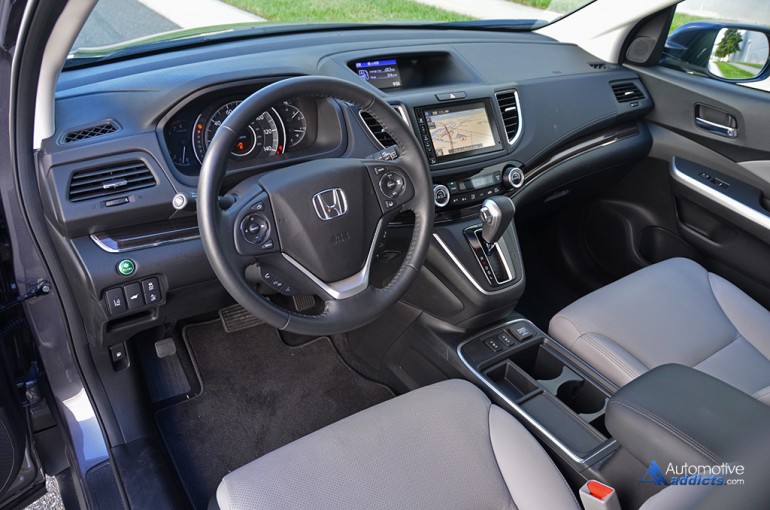 The mildly updated interior of the new 2015 Honda CR-V Touring trim plays off a game of trickery with its ample use of hard plastics. I would not say this is a bad thing, though; it is more of a mastered job at the hand of Honda to keep costs low by introducing a limited amount of soft touch surfaces where it really counts. The dashboard, mostly comprised of hard plastics, is visually acceptable until you start to knock on plastic hoping for good luck to find something luxurious within the cabin of the 2015 Honda CR-V. Basically, your luck runs out, quickly. You can knock all you want, the CR-V lacks much in the luxury department for it interior apart from the relatively comfortable heated leather seating surfaces up front and decently-proportioned rear seating area. 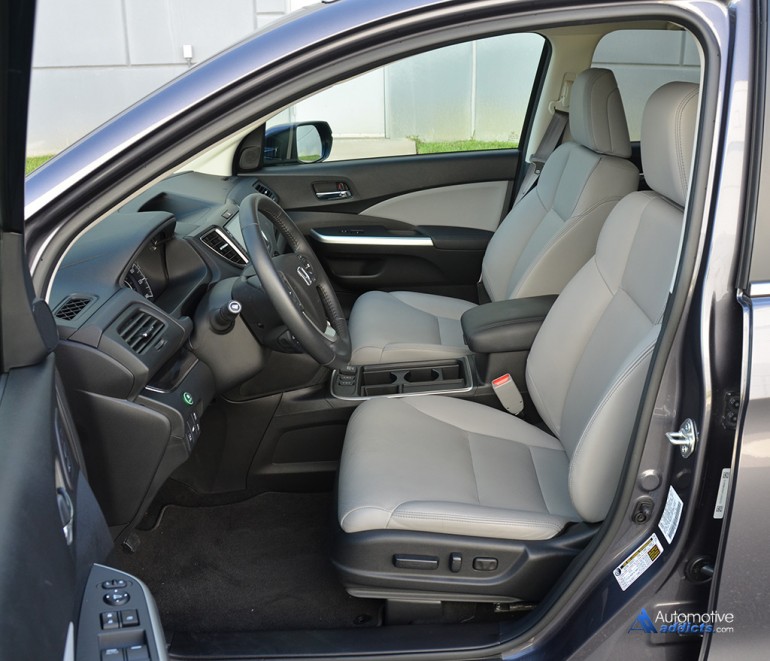 With the larger dimensions of the fourth generation CR-V, the updated 2015 model embarks on taking advantage of those accommodations and lacing up the top-trimmed AWD Touring model with active safety features and advanced sought-after technology. Within that realm, my CR-V AWD Touring test vehicle featured a high-resolution 7-inch touch screen for the basis of its infotainment system and then a smallish top-dash integrated 4-inch screen for audio, fuel efficiency and maintenance information. The major nuisances of the 7-inch touch screen infotainment system remained to be the glossy fingerprint-attracting finish and volume adjustment being a small rocker push button that may also be toggled through the touch screen with a swipe. The annoying volume adjustment and hiding of many main system functions, such as access to the navigation map, plays on your patience and takes away from being attentive on the road. This is probably where the collision mitigation system combined with lane keep assist, brake assist and blind spot monitor, all part of Honda Sensing technology system, come into play. 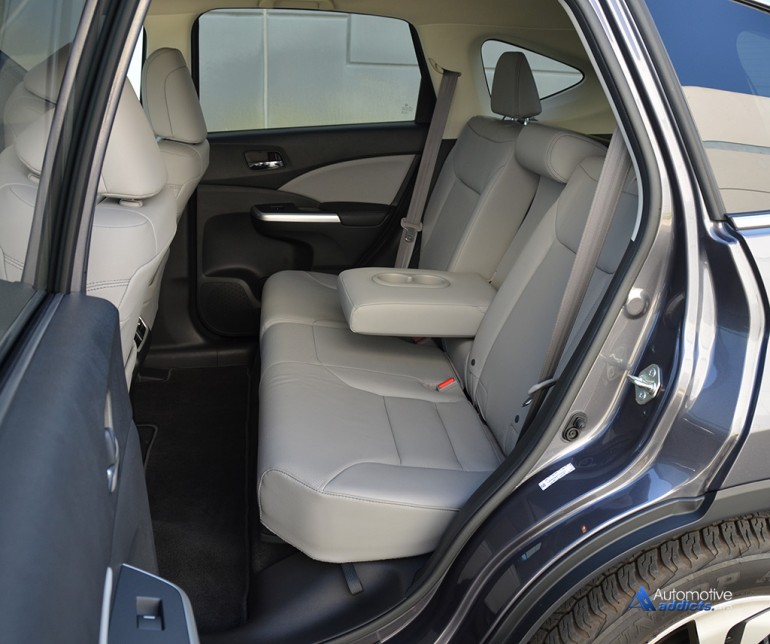 With many of these features bundled as part of the CR-V AWD Touring’s trim level, it places the new 2015 CR-V on a higher pedestal with such active safety features being available on in the compact crossover segment. Much of the active safety features act out like the Honda CR-V’s distant and bigger cousins from the Acura lineup. The CR-V will basically drive itself through use of adaptive cruise control retaining a set speed and distance from vehicles and objects while lane keep assist reads painted road lines and slightly nudges the steering wheel to follow the road. 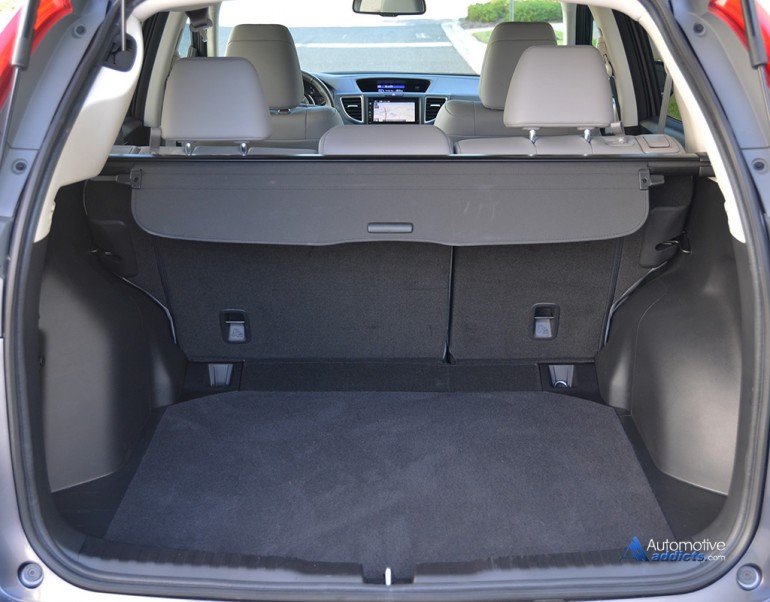 Honda’s value standpoint has always been a major attraction for the CR-V. With the 2015 model moving up the ladder and nearly merging with midsized crossover competition due to its long list of amenities, sheer size and active safety features, the price hasn’t gone out of reach of potential buyer of this segment. Considering the nicely balanced ride quality of the CR-V, its larger interior dimensions over much of its competition, ample cargo room with over 70 cubic feet to play with when the rear 60/40 split rear seat backs are folded down, and a satisfying blend of efficiency and level performance, the CR-V AWD Touring test vehicle’s as-tested price of $33,600 is in a respectable place. Still, for that amount you could easily cross shop many midsized crossovers, but with much less equipment over what the CR-V can offer at this price.