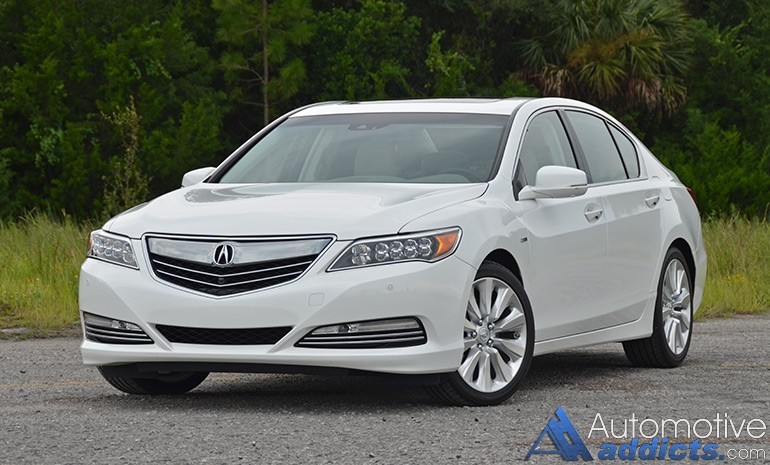 Acura’s latest lineup of vehicles are conforming to a similar mold that may redefine the brand in a positive light. Within that conformity comes a bit of dilution to the unique visual characters of the many different luxury segment offerings. Coming off of the latest Acura RLX flagship sedan for the brand, Acura introduces the RLX Sport Hybrid with additional power and excellent fuel consumption estimates in hopes to pivot the tables to offer alternatives to the large mid-sized luxury sedan market in a hybrid flavor.

The latest Acura RLX, since is full redesign in 2014 from the outgoing RL, has been a silent contender among other midsized and some full-sized luxury sedans. While its silence mostly rode on the conservative offering of its V6 powertrain powering the front wheels and subdued brand-mimicked styling, the RLX stands proudly in its own corner with a few surprises for anyone who pulls the covers off it. 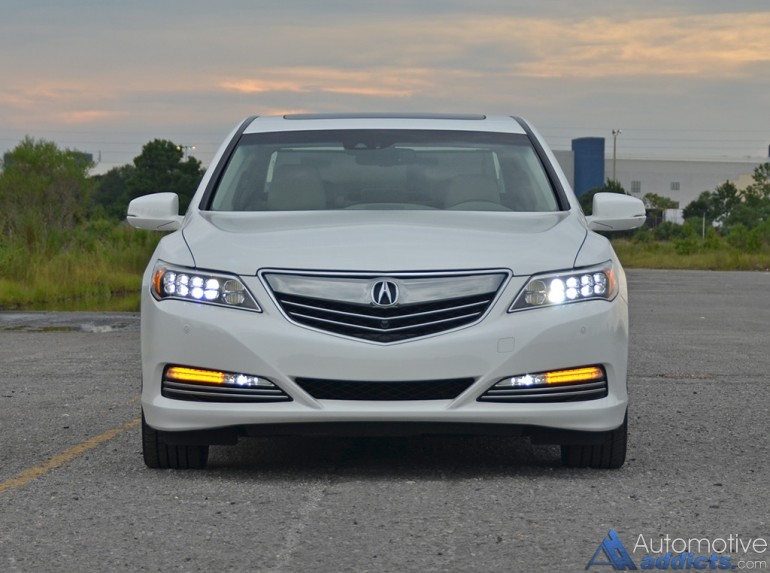 One of the biggest surprises for the 2016 RLX is a Sport Hybrid offering that takes the robust V6 powertrain and builds upon the platform to conjure up a Super Handling All-Wheel-Drive (SH-AWD) Hybrid system that has rather decent and consistent fuel consumption numbers.

Everything about the new RLX Hybrid is taken from the page of the regular RLX but set forth in a forward direction with additional power thanks to its three electric motors working in sync with the 310 horsepower and 272 lb-ft of torque direct injection engine. Total power output for the new RLX Sport Hybrid comes to a combined 377 horsepower and 341 lb-ft of torque. 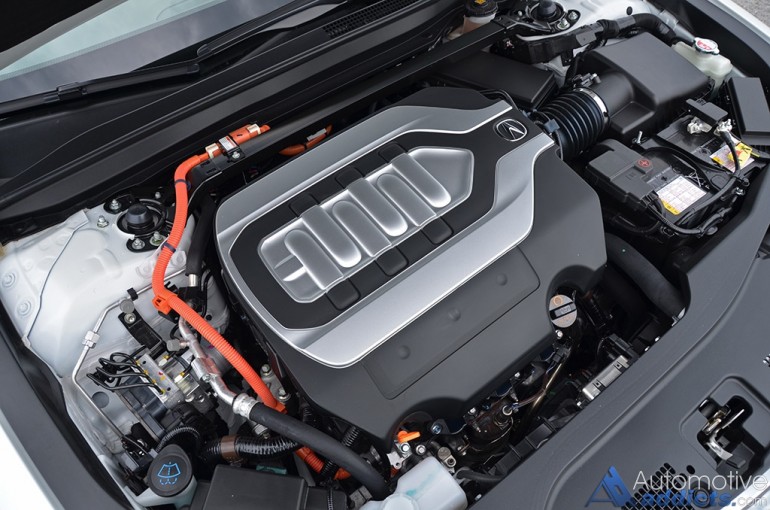 The integration of the new hybrid system in the RLX makes the driver forget they are piloting a hybrid vehicle, in the traditional sense of what you expect from something like a Prius hybrid. A good amount of power is available instantaneously on the low end but has a slight hesitation with the 7-speed dual-clutch transmission finding a lower gear before emitting full throttle when initially cruising at highway speeds.

The seamless transitions from electric motor power transmitted to the rear wheels, to a full-on all-wheel-drive explosion of forward thrust with a front wheel drive bias from the V6 engine, are delightful. Although there is no physical connection to the rear wheels from the engine, the rears are propelled by their two robust electric motors with 54 ft-lbs each, generating instant torque to both wheels out back. 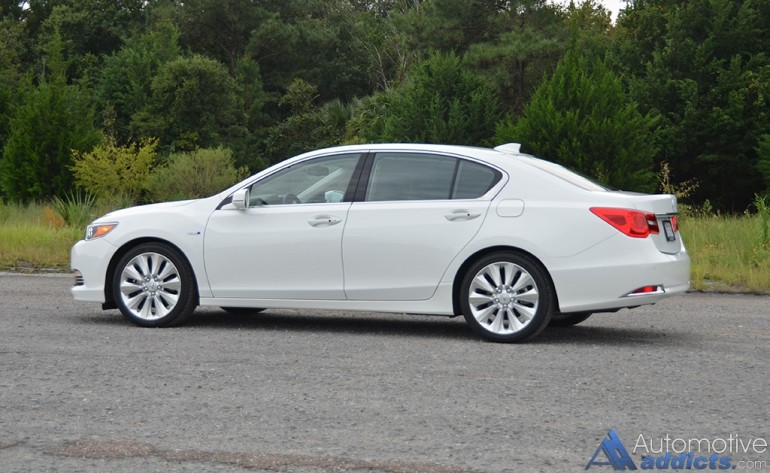 In our tests the RLX Sport Hybrid makes it to 60 mph in just 5.8 seconds, a full half second quicker than the non-hybrid front-wheel-drive RLX.

The extra weight of the 2016 RLX Sport Hybrid in toting its relatively compact lithium-Ion battery pack taking up a few cubic feet in the trunk doesn’t add any unwanted slouch in its handling abilities. The RLX Hybrid is definitely sure footed and it rewards you with lively feedback upon entering sharp turns only limiting feedback through the numb feeling electric steering rack.

In all, the most attractive part of the RLX Sport Hybrid, outside of its bubbling aluminum sheet metal and supple soft-touch interior, is its EPA fuel consumption figures of 28 mpg city, 32 mpg highway, and 30 mpg combined. During my time with the RLX Sport Hybrid I was able to get my best highway figure of 31 mpg and around town I kept a steady 29 mpg. 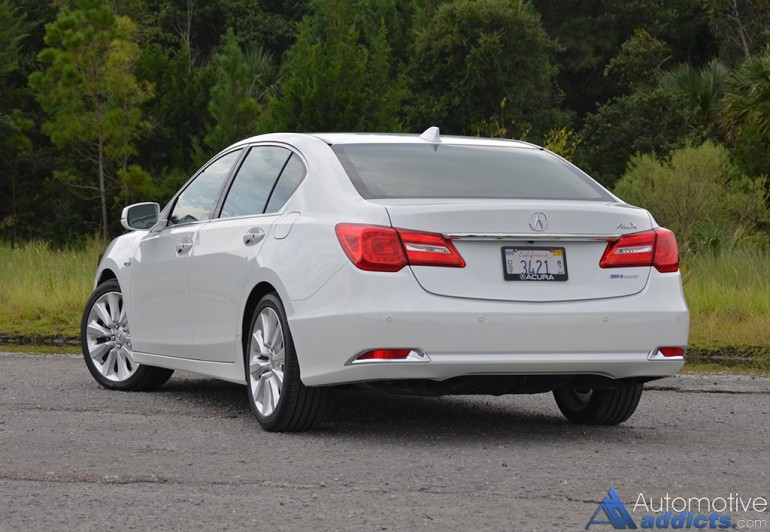 One thing to note about the RLX Sport Hybrid’s system controlling the engine, electric motors, and 7-speed dual-clutch transmission, there is a lot going on and if you were to monitor the plethora of energy meters and rpm gauge, you will quickly agree with two raised eyebrows. The system is rather complex but the simplicity of jumping in and driving like any other vehicle and never being concerned of apparent system hiccups, is a rewarding feat for Acura. 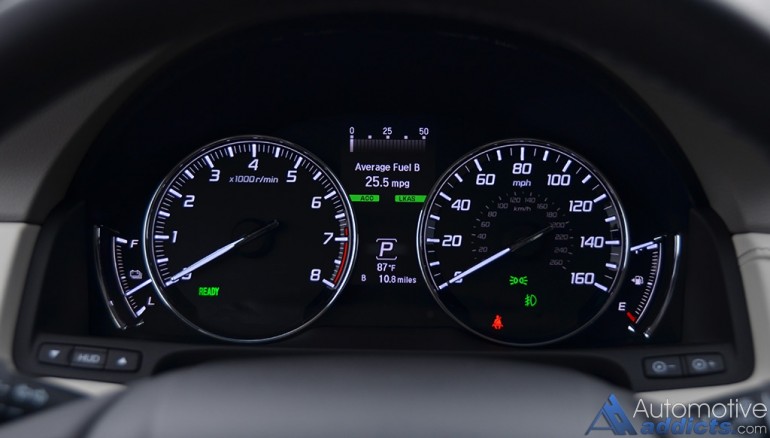 The braking regeneration, another seamless act for the RLX Hybrid with steady and predictable pedal feel, quickly charges the battery by reversing polarity in the 3 electric motors while varying deceleration to individual rear wheels based on your turn in angle. Management of the 3 electric motors, one up front and two out back, takes place in milliseconds to interact with driver inputs and starting of the V6 gas engine. Part of this balancing act was the advancement of the RLX Hybrid’s SH-AWD system to help turn in by braking the inside wheel and accelerating the outer wheel upon a turn. Don’t worry, it is all genius working in the background to keep the “Sport” in the RLX Sport Hybrid’s name – a welcomed thing among large luxury sedans. 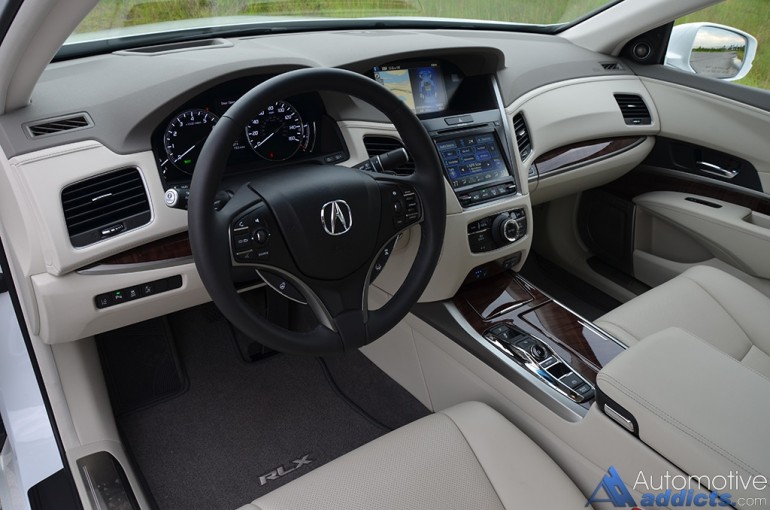 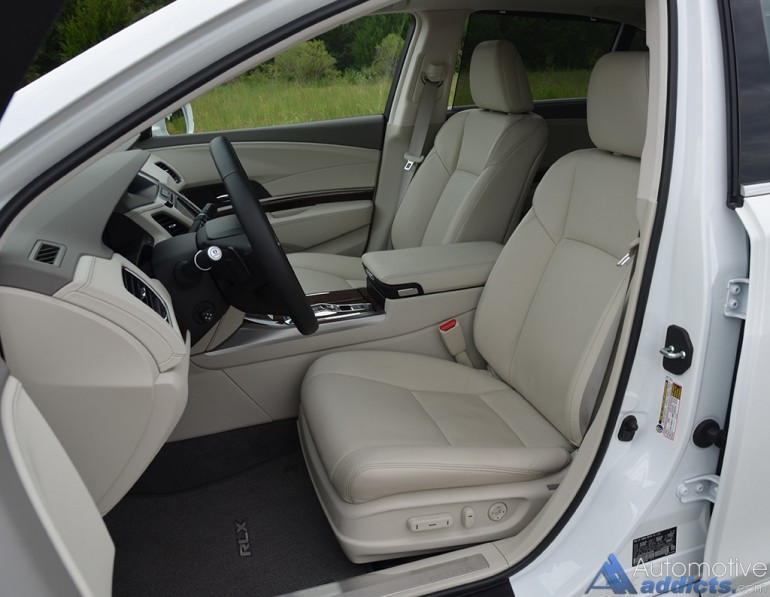 The cabin of the new 2016 RLX Sport Hybrid in the top-trimmed Advance Package variant, plays nicely to compete with mainstream luxury. Just about every surface is soft touch. Some are laced with stitched leather-like materials or contrasted with wood and limited plastic trim pieces. Acura pulled out a few extra stops in the design of the eerily quiet interior of the new RLX Sport Hybrid, which is mostly comprised of the standard RLX’s cabin materials. The seats garnish a plush appeal with heated and ventilated perforated leather surfaces up front (rear heated outboard seats) having just enough bolstering to keep you in place at the RLX Hybrid’s handling limits, and just the right connectivity and tech from its two-screen infotainment system with voice command and navigation. 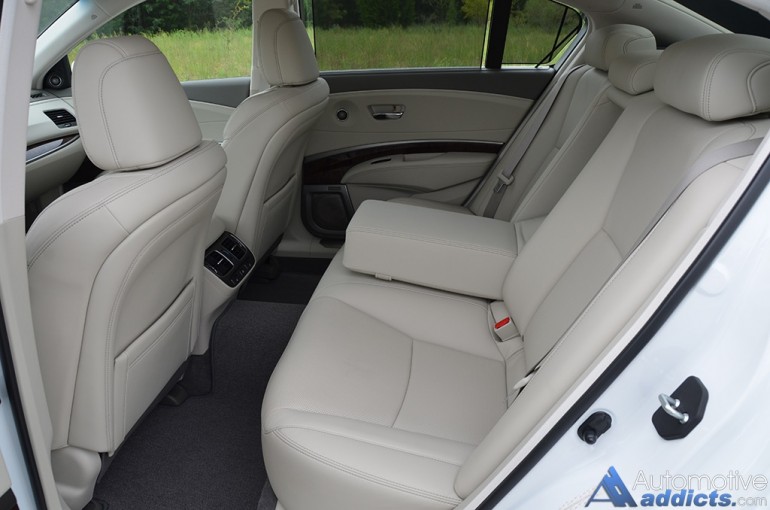 As Acura has done over the course of the past few years on top-trimmed vehicles, the two-screen infotainment system carries over giving drivers and passengers an easy-to-use setup but a redundancy of controls that may cause added confusion. The positive aspects remain to be the wide array of connectivity (USB ports, streaming Bluetooth, app suite (Pandora), and feature sets within embedded menus to provide several add-on features to the system, including its haptic feedback (a subtle vibration to confirm an on-screen button being depressed) on the lower touch-screen.

At the basis of Acura’s luxury amenities and active safety features, the RLX Sport Hybrid with the Advance Package serves up many goodies, including the ability to nearly drive itself through use of its lane keep assist and adaptive cruise control systems. The use of a new 360-degree surround view monitor system on my RLX Sport Hybrid with Advance Package creates a virtual wrap around view of the vehicle’s surroundings making parking a faultless act to keep the 19-inch noise-reducing aluminum wheels from meeting curbs. 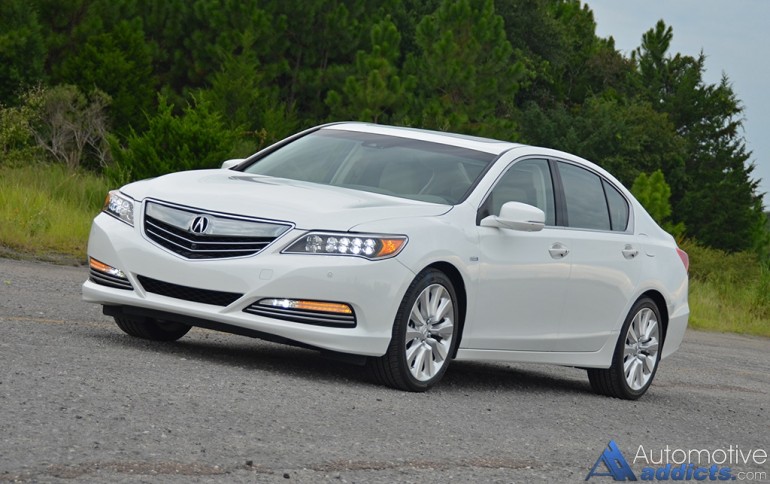