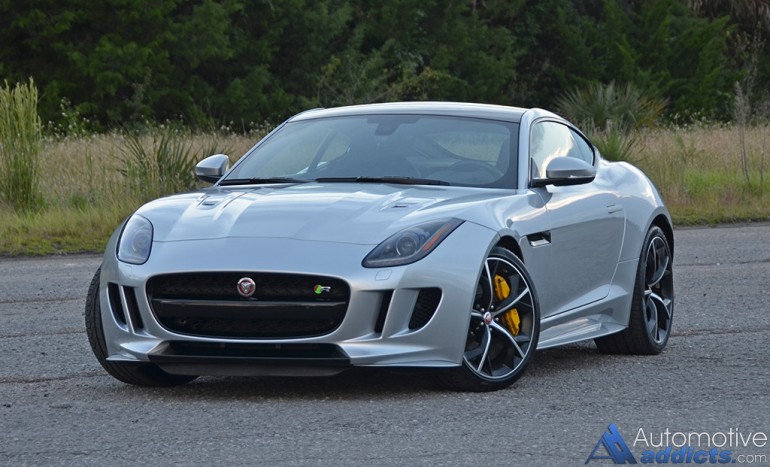 While the vigor’s of everyday life do their part to bring us pleasure every-so-often, there are those rare moments that take our breath away in uncontrollable excitement. These are unforgettable moments, one that Jaguar was able to bestow upon myself after getting a full week with the 2016 F-Type R Coupe, a vehicle that isn’t shy about outwardly expressing its prowess from its menacing good looks to the ear-popping clatter and backfire from its quad-tipped exhaust.

The latest Jaguar F-Type carries on into its second year without any big changes other than now utilizing an electric steering rack on all F-Type models replacing the outgoing hydraulic unit. 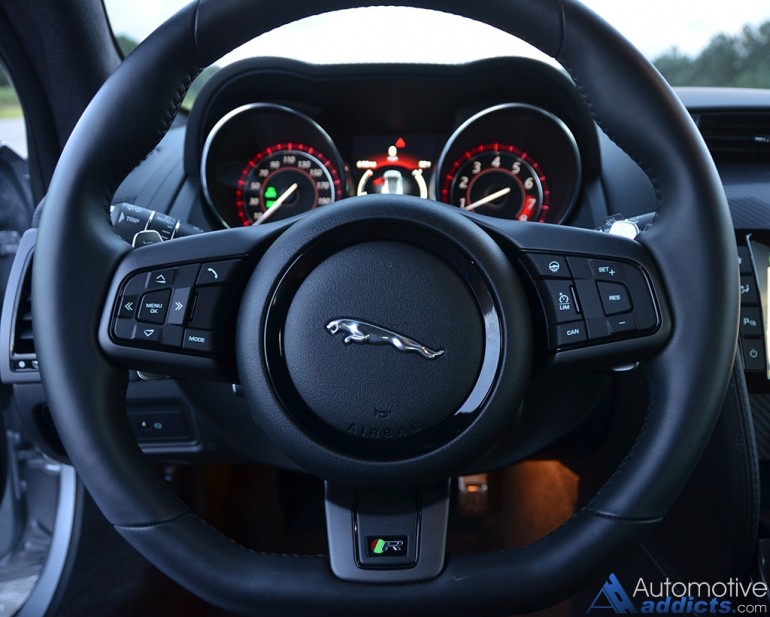 In my indulgence in Jaguar’s ultimate performance, I spent some quality time with the 2016 F-Type R Coupe gushing with 550 horsepower and 502 lb-ft of torque from its Supercharged V8 engine powering all four wheels through an 8-speed automatic transmission. The Jaguar F-Type was already famed as the good-looking purring cat that stood tall in the midst of exotics and high-horsepower monsters. The F-Type in its R Coupe trim is nothing short of the exotic car expectation taking the brand’s proven 5.0-liter V8 and doing something magical with it to produce 550 horsepower and sound like a menacing rain forest predator ready to pounce on its pray and take claim of its territory. 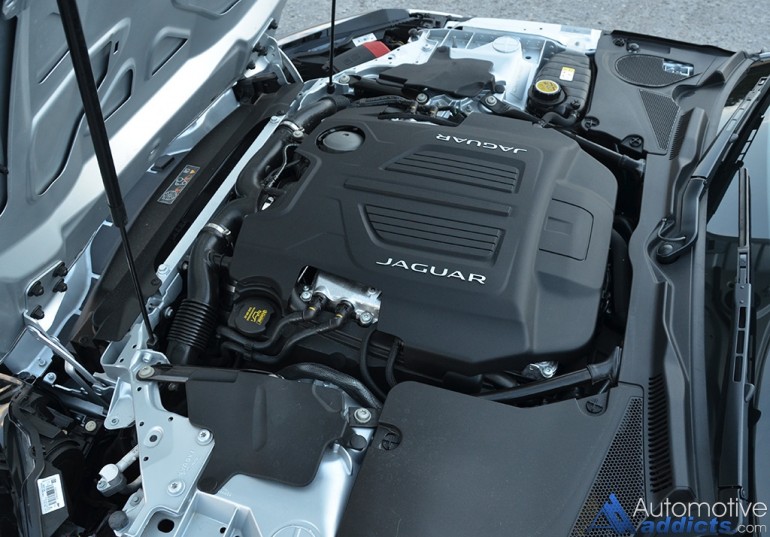 The Jaguar F-Type R Coupe is something special in terms of its hammering power and razor sharp looks. The power is somewhat tamed in a rigid coupe chassis taking the counterparts of the F-Type convertible and only making them better through connecting pillars encasing a glass non-opening sunroof with a manual-sliding shade. 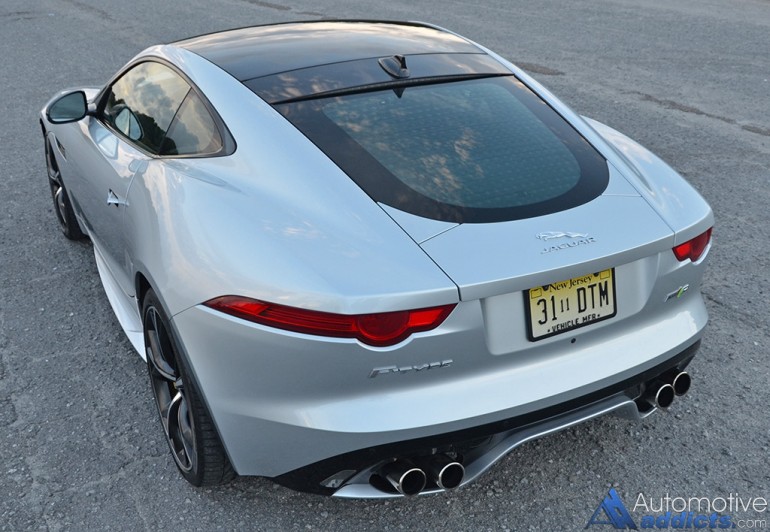 Slowing things down is the job of my test vehicle’s optional and massively-sized carbon ceramic brakes, which do a phenomenal job to prevent fade under repeated high-speed stops. 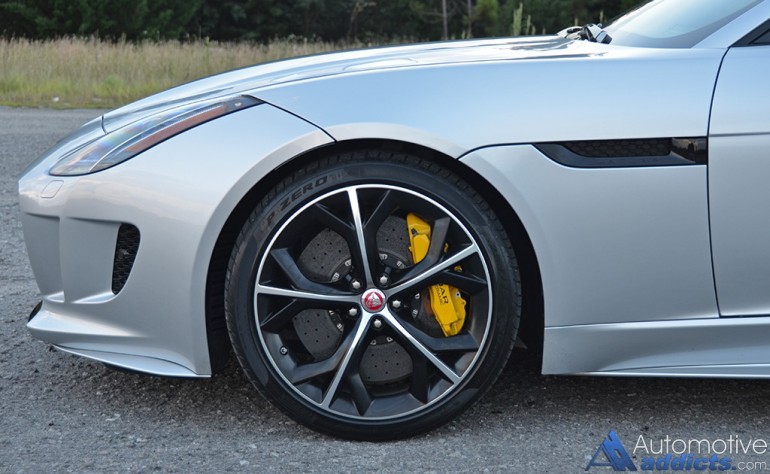 Allowing the 8-speed automatic transmission to bang through the gears is a rewarding deed. Not only does your back get firmly pressed deep into the suedecloth-inserted, thickly-padded, with meaty bolsters sport seats, but your ear gets a workout with tantalizing grows, clatters and pops from the exhaust.

The nose is almost indescribable – something that induces head turns from onlookers and angry neighbors in gated subdivisions. I aptly call the center column button for the exhaust valve (also activated in dynamic mode) the ‘angry neighborhood’ button as people in my subdivision annoyingly asked me to slow down thinking I was exceeding the posted speed limit, which I was not. It was there way of saying “quiet that sexy beast down.”

Quickly tapping the Active Sport Exhaust button enabled bypass valves to quiet the F-Type R Coupe to a luxury-like state, one that exemplifies its delicately stitched leather-encased and wrapped interior. 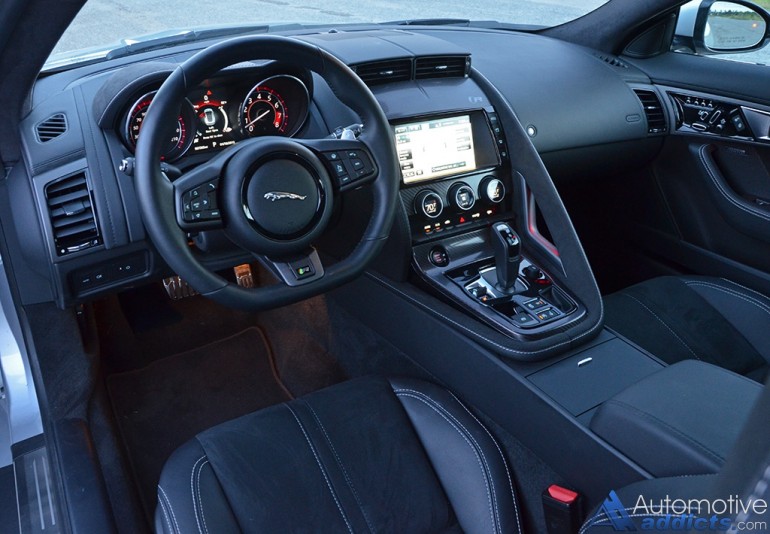 Making several stops in the midst of heavy traffic I came a hair shy of the EPA fuel estimate of 15 mpg city even with the overly repetitive start-stop system enabled. On the highway the 23 mpg EPA estimate is attainable provided you are traveling at a constant speed instead of juicing the F-Type R awaiting those rumbling and popping exhaust sounds upon deceleration.

The balance of the chassis is superb. While you can’t break the wheels loose in plumbs of smoke as all of the F-Type Rs come in AWD, it allows subtle and controlled rear-end drifts while in its dynamic mode, one of the three (normal, dynamic, rain/ice/snow) driving modes. 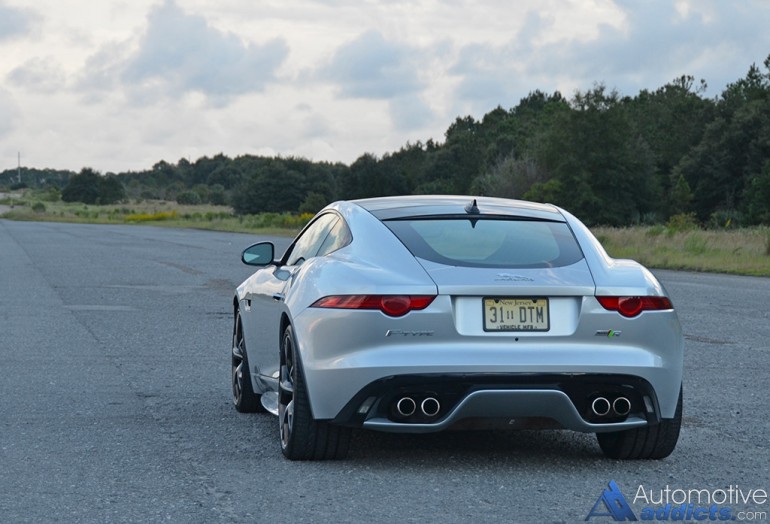 Adding extra downforce is the job of the motorized rear spoiler that automatically deploys at about 72 mph and retracts around 52 mph. It’s a neat act, one that seemed to back away rear-end tailgaters as some could have easily mistaken the rectangle-proportioned spoiler as an air brake. The Jag’s driving traits were good but there remained some reminders of piloting large vehicle as it did in the steering feel. While the steering is pretty sharp with its quick ZF-source electric assist unit, it fails to provide expected feedback and small off-center turns at speed somewhat numb and artificial lacking a point of reference for feedback. Fundamentally, the steering by way of the leather-wrapped flat-bottom wheel and new electric assist is consistent at best varying slightly with added weight in Dynamic mode where you know exactly what to expect after an hour of driving. However, the collective steering response and feedback is slightly better than some of the F-Type R’s direct competition in my assessment. 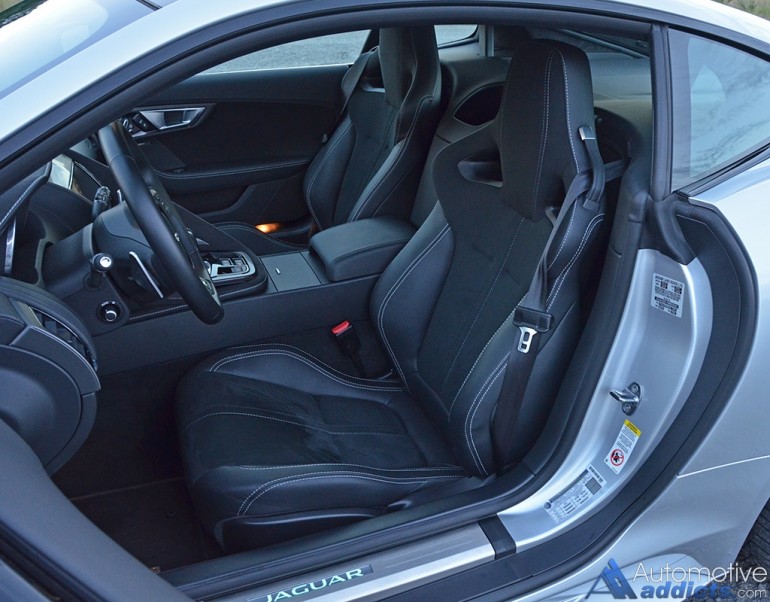 While the cabin of the Jaguar F-Type R Coupe is quite luxurious with endless amounts of suede and stitched leather, the infotainment system’s antiquated nature spoils things, leaving you with a somewhat incomplete package. While many of the features of the Jaguar infotainment system are highly desirable and welcomed in such a luxurious and exotic vehicle, they leave you with a bad taste by the way of slow-to-respond functions, boring graphics and silly system hang-ups that fail to respond to your command. Moreover, the Meridian Surround sound audio system was more on the disappointing side with an out-of-tune subwoofer pounding the seat backs and a mismatched range of tones no matter how you adjusted the sound settings. Thankfully, the Jaguar F-Type R Coupe as a symphony of its own from its monstrous V8 engine feeding one of the loudest stock exhaust systems you can find on the current automotive market. 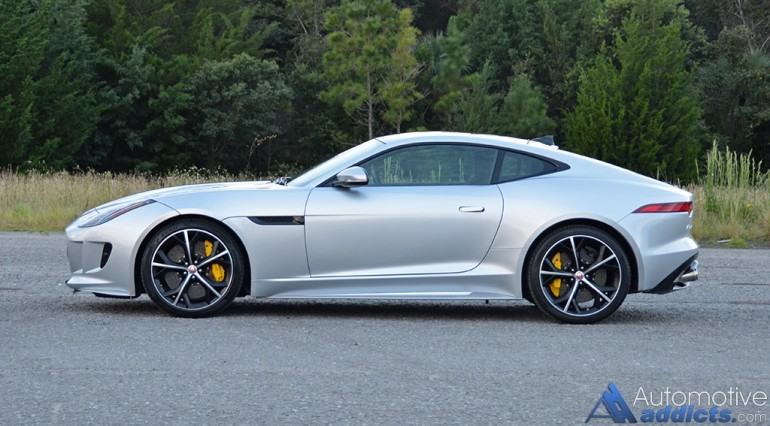 Jaguar has evoked a rarity among sports grand touring vehicles in the F-Type R Couple that emerges with pride into the exotic spectrum. Entry price to drive the best of Jaguar isn’t cheap and it will set you back $128,695 for the fine example sent to me for review. Mind you, that price includes a few option packages, including a $12,000 addition for the Carbon Ceramic brakes, $2,100 for the Vision Pack 3 (adaptive and intelligent front lighting, front sensors and rear parking camera, and blind spot monitor), $1,000 for the Suedecloth interior pack, $600 for a Black Pack 3 (blacks out exterior trim), and $450 for illuminated tread plates. 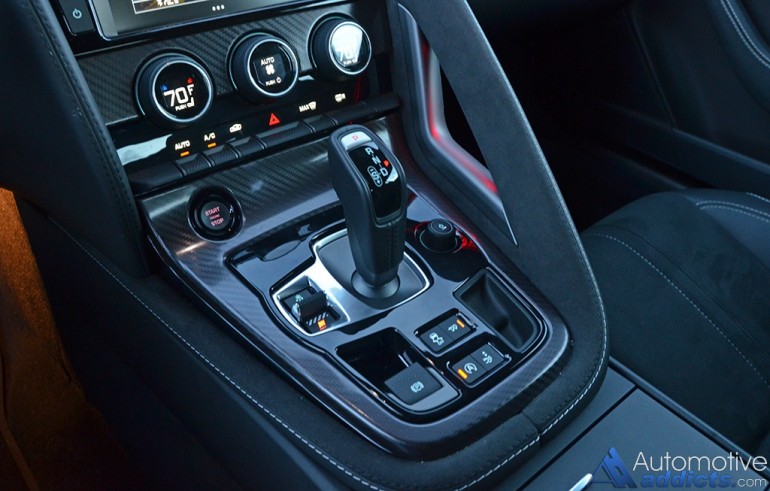 One thing to note at Jaguar’s benefit for attracting an enthusiast base, is that a 6-speed manual transmission is available for the rear-wheel-drive Supercharged V6 variants. Of course, in the F-Type R Coupe variant, Jaguar as created the ultimate cat – beautiful enough to gawk over yet purposefully fierce if ever tempted.