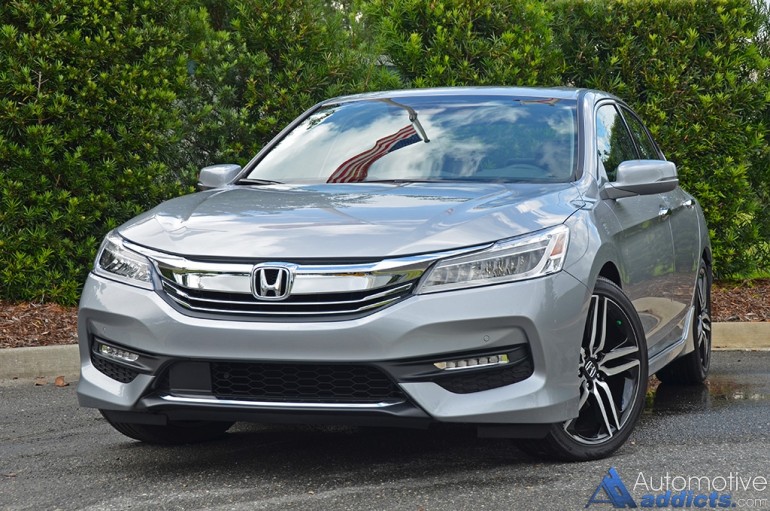 The Honda Accord has long been a staple for the mainstream breed of midsized sedan owners in America. Honda’s offering of the Accord has always been a steady and consistent dealt hand that consumers kept going back for. The latest generation Honda Accord gets a refresh for the 2016 model year, evoking subtle improvements and an extra sports appeal that goes a long way to stand out in a space as crowded as the midsized sedan segment.

>> Get the best price on the Honda Accord from a network of local dealers now. <<

The new 2016 Honda Accord embarks on a stab at Toyota’s number-one-selling Camry where in hopes of the new style, updated feature content and remarkable fuel economy, it could captivate a larger audience. 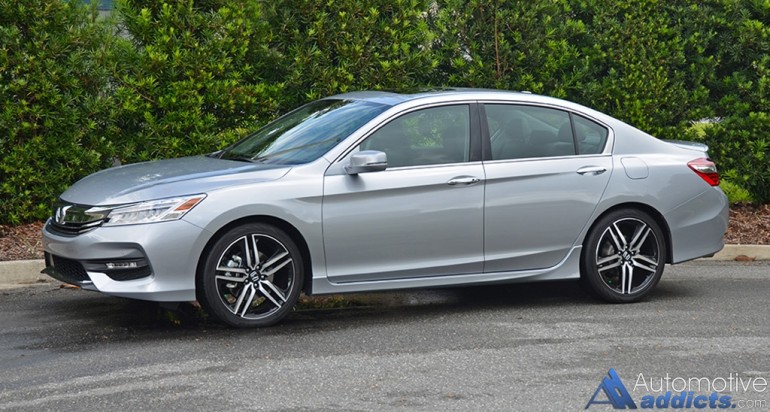 In my initial assessment of the 2016 Accord it appears Honda is enveloping a new design language fitting for the all-new 2016 Civic and the updated Accord. The reworked front and rear end of the Accord follow this new mold and its quite a welcomed design that takes a page out Acura’s luxury branded design book. It’s not a bad thing at all, it actually works in my eye and my top-trimmed Accord V6 Touring model is quite the sporty flavor for a mainstream midsized sedan with its large split five-spoke 19-inch wheels, bold fenders, and bubbling overall appearance. The new 2016 Honda Accord seems to grasp at making a bold statement here but carefully considers its contemporary audience. 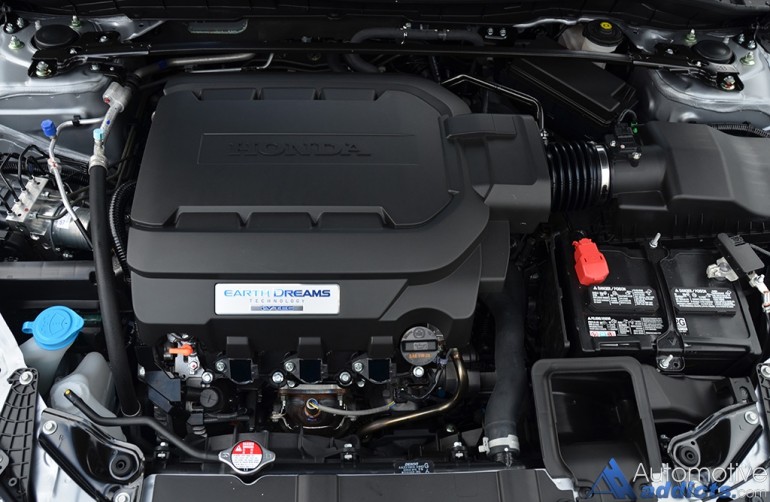 The 2016 Honda Accord V6 model retains its 3.5-liter engine making 278 horsepower at 6,200 rpm and 252 lb-ft of torque at 4,900 rpm. The 3.5-liter V6 in the Accord is mated to a traditional 6-speed automatic transmission. Working together with the V6 engine’s Variable Cylinder Management by use of 3 cylinders at light load times and the 6-speed auto’s clever gear program mapping, the new Accord is able to get decent EPA fuel economy estimates at 21 mpg city and an astonishing 34 mpg on the highway. The discernments of the 6-speed transmission lie within a slight hesitation for down-shifts when full throttle is demanded at cruising speeds.

The transmission will sometimes drop down only one gear with an abundance of rpm travel left in the engine’s range. Other times, the 6-speed auto will take an extra second or two to find its way to the lowest gear, mostly in a fashion you would expect from a vehicle having 8 or more gears to sift through. This was rather unexpected and disconcerting for me being that the transmission only has six gears to manage. It is possible this shortcoming is to improve upon fuel economy? Either way, the lack of shifter paddles or a manual shift mode on the Accord V6 models is a misnomer, a feature currently reserved for the 4-cylinder’s CVT models only. Quite confusing here – you can get shift paddles on the 4-cylinder CVT models for virtually mulling through the “gears,” but no manual shifts for the powerful V6. 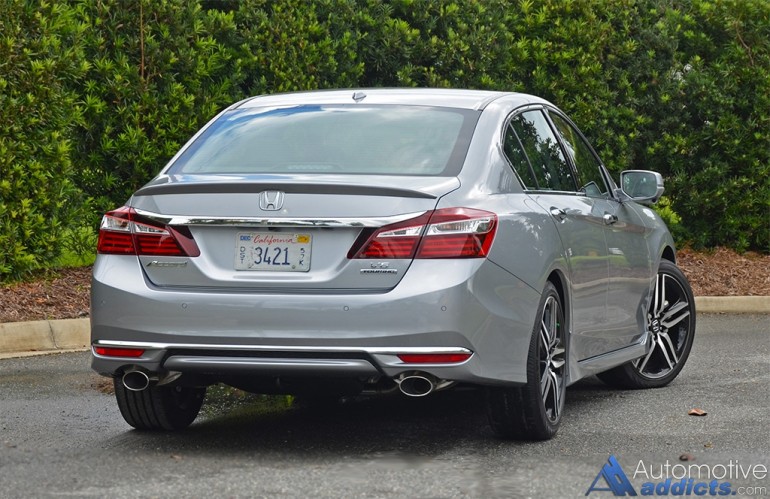 At the benefit of the new 2016 Honda Accord V6’s performance, it takes just 6.2 seconds to reach 60 mph and the handling traits are much more assuring than the Toyota Camry V6 XSE without sacrificing ride quality when going over bumps or road imperfections.

The new Honda Accord V6 in its top-tier Touring trim provides many creature comforts and luxury features. For starters, all-new for the complete Accord lineup, it gets rear LED tail lights and the Touring model gets LED headlights and foglights. 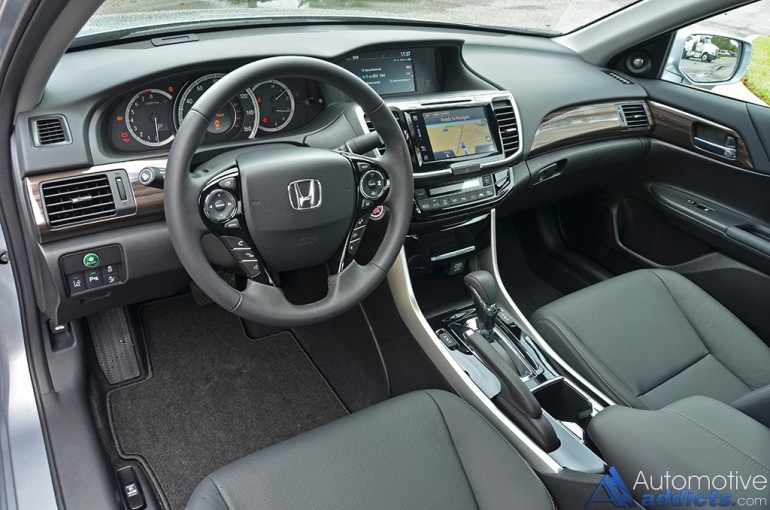 The interior of the new Accord has been reworked as well with an airy cabin that places soft touch plastics in the areas that matter while there is a limited amount of glossy surface plastics down the center stack for a luxurious appeal. 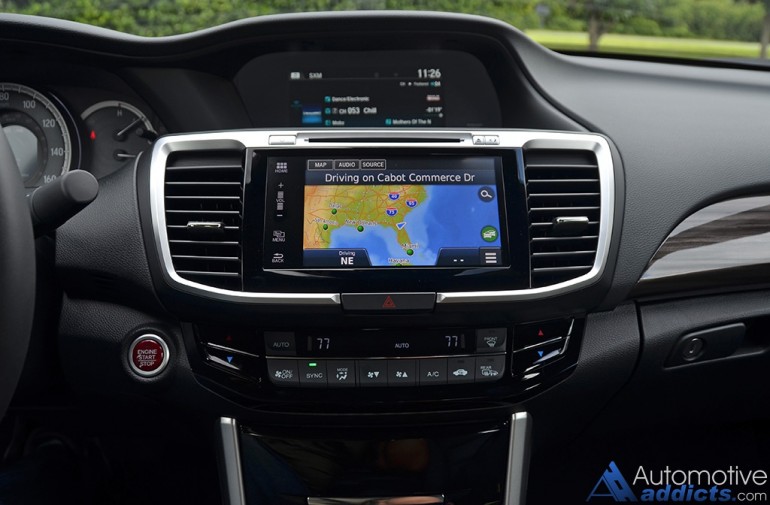 The infotainment system of the new Accord utilizes a brand familiar two-screen setup yet takes a slightly different approach with the top screen defaulting to the audio system’s information, compass and vehicle data, while the lower touch screen can display any type of function, including the GPS Navigation map, audio, system settings and vehicle settings. The touch screen is easy to use and navigate but lacks a volume knob in place of a virtual slider, which reiterates my previous displeasure with Honda’s latest infotainment units in several models. Moreover, due to the screen being short reach from the driver or passenger, it tends to get visually washed out in bright sunlight or beaming light down through an opened sunroof/sunroof shade. 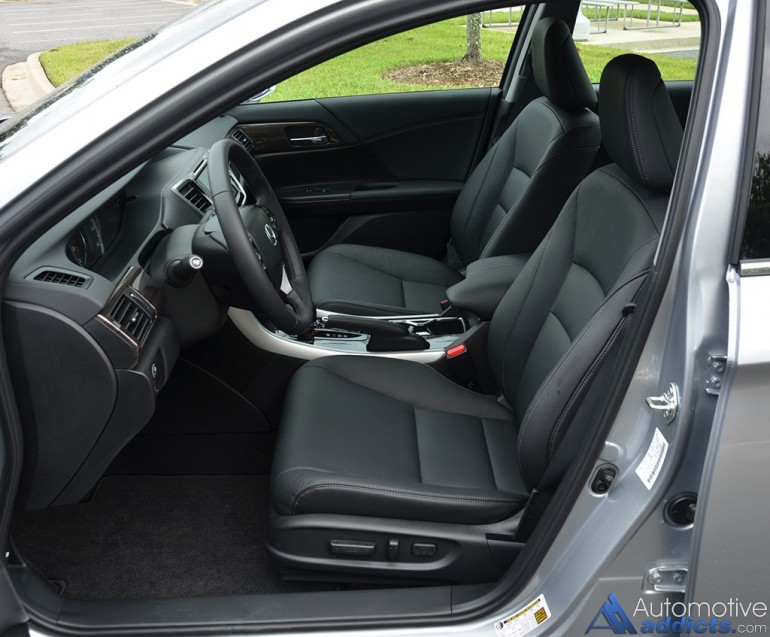 Use of Apple CarPlay is a welcomed feature enabling you to connect your iPhone and take use of the simple large icons in a familiar iOS operating system fashion for access to messages, your iPhone’s audio library, Apple Maps, phone integration, podcasts, audiobooks, and many other information options through use of Siri.

The seating positions of the new Accord all have ample room in every direction. The comfort of the lightly bolstered seats conform to what you would expect from a top-selling mainstream midsized sedan. I would even go as far as to claim the 2016 Honda Accord having a better interior layout than a top-trimmed Toyota Camry. Additionally, there is plenty of cargo space in the trunk, a total of 15.5 cubic feet; while additional space can be had through the 60/40 split folding rear seat backs. The generous use of USB ports is also an added value that goes a long way for today’s connectivity of mobile devices. 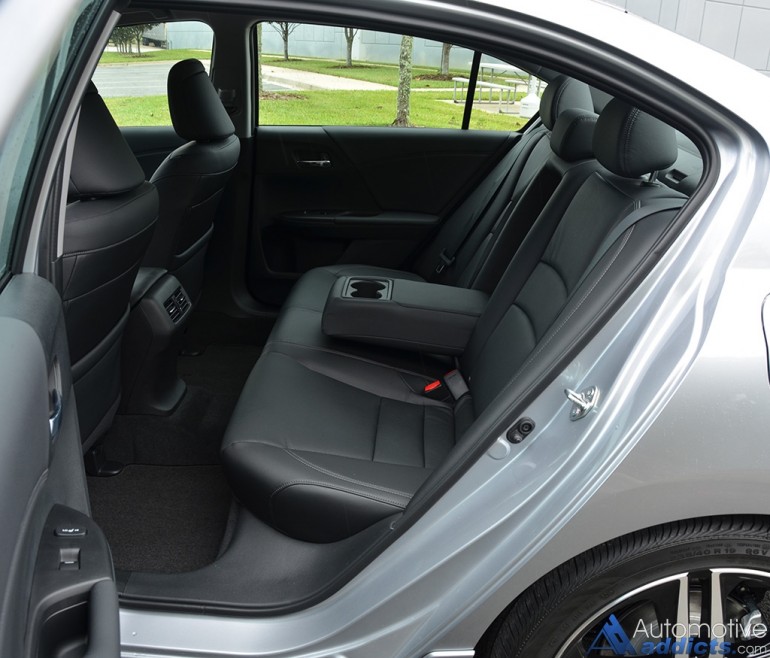 The race to the top is a close one and with the new 2016 Honda Accord, I’m assured things will stay that way.

>> Get the best price on the Honda Accord from a network of local dealers now. <<