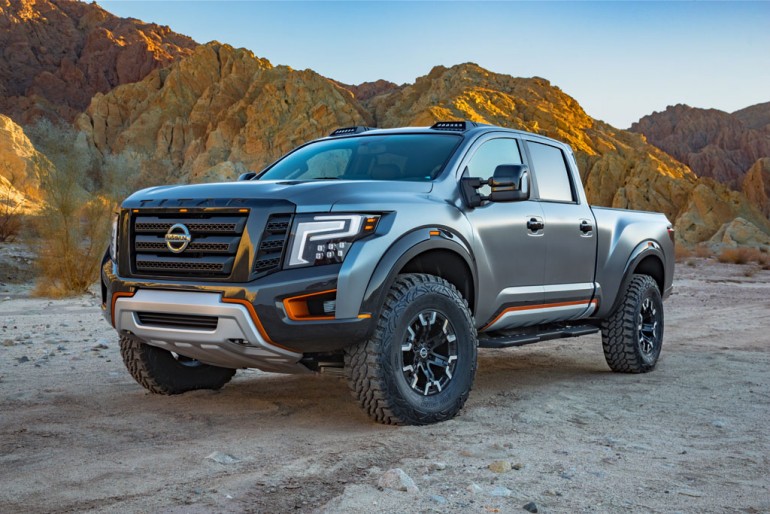 Nissan’s Titan has already been a head-turner for many reasons, even making the finalist list for North American Car and Truck/Utility of the Year. To spice things up even more from its robust and rugged platform, Nissan introduces a Titan Warrior Concept based on the Titan XD at the 2016 North American International Auto Show today. 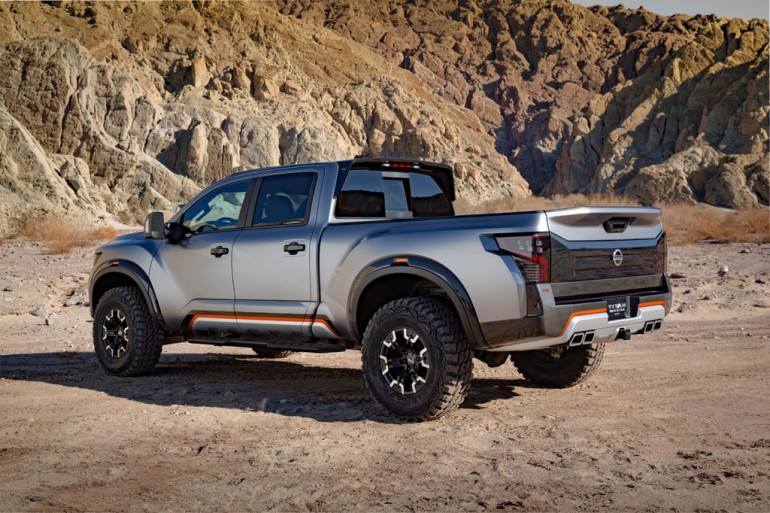 Pushing the Boundaries
Just as the all-new TITAN XD with its Cummins® 5.0L V8 Turbo Diesel engine has bulked up the standards for customers shopping the light-duty pickup class, the TITAN Warrior Concept was created to take the production version to the extreme.

“Nissan has always pushed the boundaries of traditional automotive design and engineering, from our Nissan GT-R supercar to the new TITAN XD,” explained Muñoz. “We do this with a clear conviction that there are buyers out there who appreciate something everyone else does not have. A ‘work hard, play harder, get bigger’ TITAN XD certainly does the job.”

The TITAN Warrior Concept builds on the recent Project Titan, a crowd-sourced customization of an original-generation Titan that sent two U.S. military veterans representing Wounded Warrior Project® on a once-in-a-lifetime adventure in Alaska. The new concept truck also pays homage to Nissan’s heritage of off-road racing and adventuring, which goes back to the days of Baja “Hardbody” competition pickups and Paris-Dakar Rally treks.

“As we launch the all-new 2016 TITAN XD, the TITAN Warrior Concept was conceived to share our team’s pride and excitement to be back in the truck market in a big way,” added Muñoz. “The team delivered.”

A Warrior with a “Modern Armor” Exterior
The TITAN Warrior Concept creators had more than a strong foundation on which to build their vision of a bold and expanding future in the full-size pickup market, they had a familiar one.

As part of the group that brought the “American TITAN” to life – a group that ranged from Tennessee, Michigan, Mississippi, Indiana, Arizona and California – the design team imagined how their original TITAN design, inspired by warriors in ancient Greek mythology, might evolve to extreme levels of adventure duty.

First, while maintaining the TITAN XD Crew Cab’s standard wheelbase and length, they wanted to give the concept truck an even more powerful presence than the original. The height was raised nearly three inches, from 78.7 inches to 81.5 inches, to fit a quartet of 37-inch tall off-road tires mounted on custom 18×9.5-inch aluminum-alloy wheels. The wheels’ machined aluminum surfaces feature a dark matte finish and continue the production TITAN XD’s “precision tool” design theme.

To create clearance for the new oversize tires and accommodate the new, long-travel suspension, the TITAN Warrior Concept’s width was extended three inches on each side, from 80.6 inches total to 86.6 inches. Once the dimensions and imposing stance were mapped out, the extreme makeover began in earnest.

Building on the new second-generation TITAN’s warrior-inspired styling, the designers amplified the protective look of the production exterior. Designating the new look as “modern armor” – with a stealthy, robotic quality – they continued the anatomical feel of the production TITAN, but added a more machine-like, sharper-edge appearance.

The grille and signature TITAN headlights were enhanced to offer a more technical, menacing look. The front and rear fenders have been flared and offer an extremely muscular appearance. Functional hood vents were added for cooling the powerful diesel engine. The broad hoodline is balanced underneath by the large front skidplate, which interlocks into the powerful front bumper.

Custom LED lights, front and rear, add to the TITAN Warrior Concept’s stealthy presence. The headlights carry a sense of the new Nissan signature boomerang lights, but with a more precise, upright, robotic feel. In the rear, the integrated LED taillights take the form of a TITAN “T” logo, split by the wide tailgate. As a finishing touch, a quad-tipped exhaust system is integrated into the rear bumper.

The TITAN Warrior Concept is covered in a custom matte-gunmetal paint called “Thunder” and accented in special “Magma” orange and black color highlights.

“There’s a sense to the exterior design that the TITAN Warrior Concept could drive right off the auto show stage and retrace the historic route of Nissan’s off-road racing victories in the Baja Peninsula,” said Muñoz. “And given the high-torque Cummins 5.0L V8 Turbo Diesel, extensive suspension modifications and TITAN XD heavy-duty durability, it certainly could.”

A Polished, Premium Sport Interior
Inside the TITAN Warrior Concept’s rugged performance-focused exterior is an interior conceived to handle the abuse experienced on an extended off-road excursion in comfort and style.

The interior design team at Nissan Design America wanted to give the vehicle a unique polished “chronograph” look and feel, focusing on materials and detailing while remaining true to the TITAN Warrior Concept’s active performance theme. For example, the seats are covered in a carbon-colored high-strength seat fabric trimmed with “Magma” orange accents. Interior surfaces utilize material, such as carbon fiber, polished chrome finishes, leather with accented Magma orange stitching.

Where the TITAN Warrior Concept departs from its production counterpart is in the full custom suspension design. In the front, the standard suspension has been replaced with custom upper and lower control arm with performance ball joints, along with racing-style internal bypass reservoir coil-over shocks with custom reservoir mounts and tie-rod extensions.

Exploring New Boundaries
The debut of the TITAN Warrior Concept at the North American International Auto Show comes exactly one year since the debut of the production TITAN XD on the same stage. TITAN XD has been named “Truck of Texas” by the Texas Auto Writers Association (TAWA) in their annual Texas Truck Rodeo, which puts the industry’s best trucks, SUVs and CUVs through a grueling two-day evaluation. In addition to the competition’s top award, Truck of Texas, the TITAN XD won three other honors – Luxury Pickup Truck of Texas, Off-Road Pickup Truck of Texas and Best Powertrain for its standard Cummins® 5.0L V8 Turbo Diesel engine.

Now that TITAN XD Crew Cab with a Cummins 5.0L V8 Turbo Diesel engine is in Nissan showrooms, the rollout of new models continues. In December, Nissan announced that advanced gas-powered Endurance® V8 producing 390 horsepower and 401 lb-ft of torque will be available in both TITAN and TITAN XD models beginning in early spring 2016.

Ultimately, the new TITAN will be offered in three cab configurations, two frame sizes, three powertrain offerings and five grade levels (more information on the full lineup will be available at a later date).

“While Nissan still has many roads and trails to travel as we continue to launch additional production versions of our bold new TITAN, this new TITAN Warrior Concept gives an important signal to American truck enthusiasts that our vision for exploring new boundaries remains strong,” concluded Muñoz. “Truck lovers are never static and neither is TITAN.”