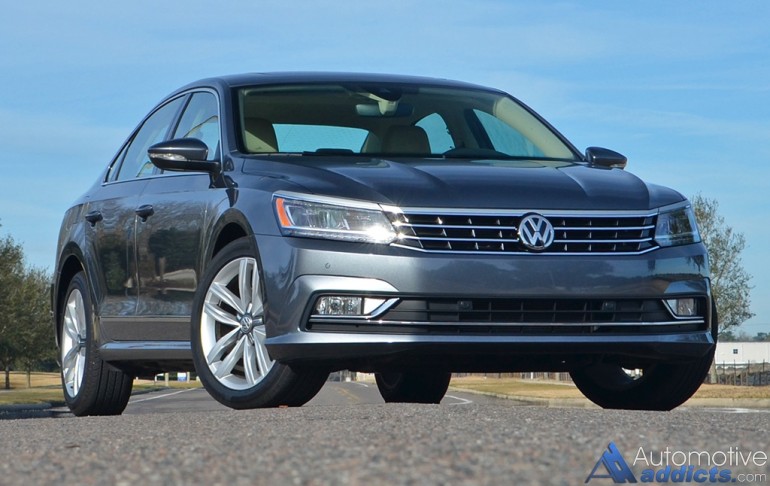 While Volkswagen has had its fair share of Diesel emissions criticism recently, their willingness to keep things fresh and interesting is paying dividends when it comes to vehicles like the new 2016 Passat SEL V6. The top-trimmed Volkswagen recently graced my garage featuring its mild exterior restyling and slightly revised interior to keep it on a level playing field with other mainstream sedans.

>> Get the best price on the Volkswagen Passat from a network of local dealers now. <<

The new 2016 Volkswagen Passat, with its nearly full-sized dimensions, remains to be offered in several trim levels starting with its base S model with a modest 1.8-liter turbocharged 4-cylinder with 170 horsepower. The same engine can also be had in all trims, including SE, SEL, and the new-for-2016 R-Line trim. Currently, the Passat TDI diesel is not offered for the 2016 model year. 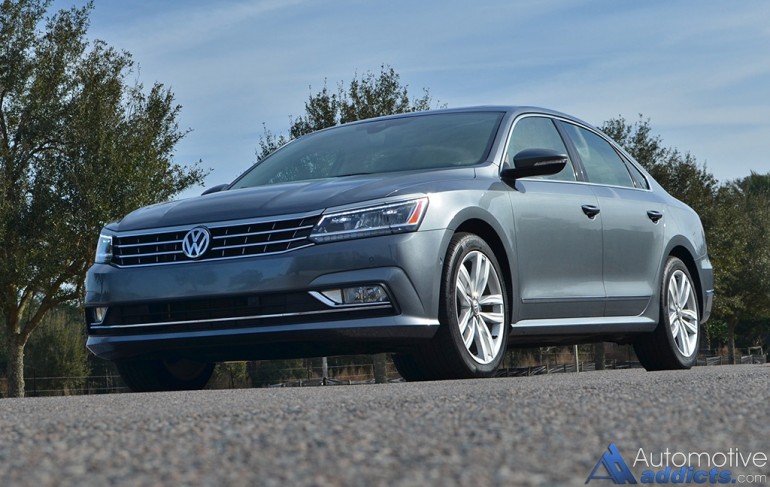 Moving up to my top-trimmed SEL V6 model, the Passat gets a healthy dose of 280 horsepower and 258 lb-ft of torque. At times, the power from the narrow-angle piston-configured VR6 engine (15-degree-V) feels like much more than stated on paper, especially considering the direct connection from shifts performed by the 6-speed automated dual-clutch (DSG) transmission feeding the front wheels. 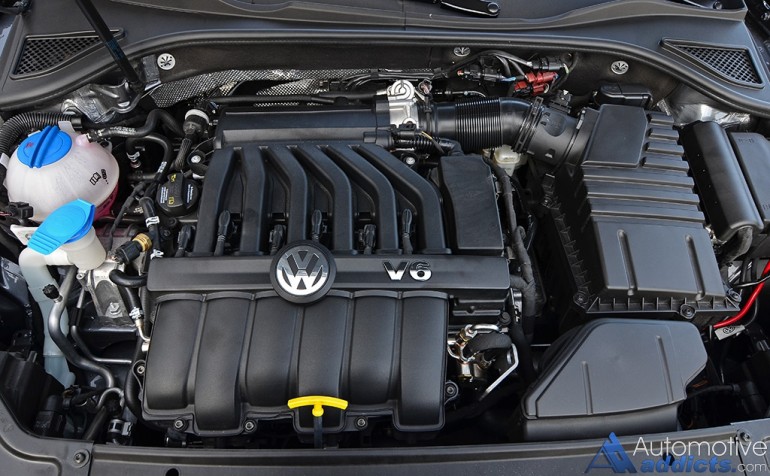 Volkswagen has never been shy about its performance from their larger engine offerings, and the latest 3.6-liter VR6 is nothing short of that notion. Coupled with an extremely quick-shifting 6-speed automated dual-clutch transmission, the Passat gives you a direct feel throughout the band of the broad-powered VR6 engine. While the transmission exhibits a bit of clunkiness at low speeds, up-shifts are sharp, lighting fast, and can hardly be felt once things get moving nearly emulating what a CVT (Continuously Variable Transmission) may feel like without the constant high-rpm-holding drama. Use of the sport shifting mode eliminates the use of sixth gear and keeps you right in the middle of the V6’s robust power band while steering wheel mounted paddle shifters permit on-demand manual shifts. Under moderate to heavy acceleration, the front wheels tend to break loose often only to be sapped by the undefeatable traction control. With that, my timing to 60 mph was slightly inconsistent, but I eventually scored my surprisingly best time of 6.4 seconds. 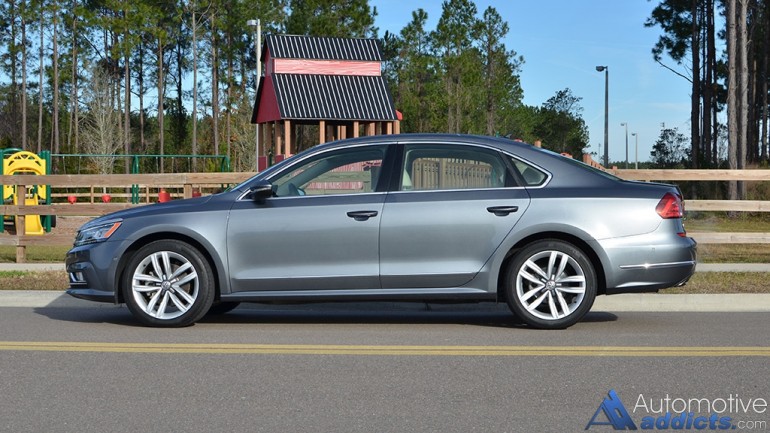 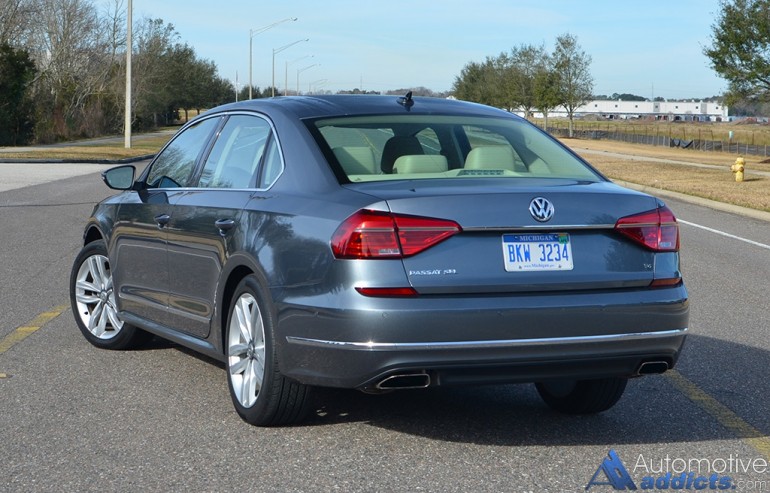 The ride quality of the Passat exudes a nice balance of sport and luxury. Though, the front end is exceptionally spongy and suffers from unwanted bounces when going over decent-sized bumps or rolling road surfaces. To me, the front end’s sloppiness, which could be corrected with much stiffer shocks, unsettles the handling dynamics of the Passat and makes it feel as if its curb weight of 3,571 pounds has instantly doubled. Apart from the front end’s suspension shortcoming, the Passat is a well-mannered vehicle on the road with plentiful power. The electric steering rack is precise but lacks any notable feedback and has a very lightweight feel that can be a little unsettling at highway speeds. 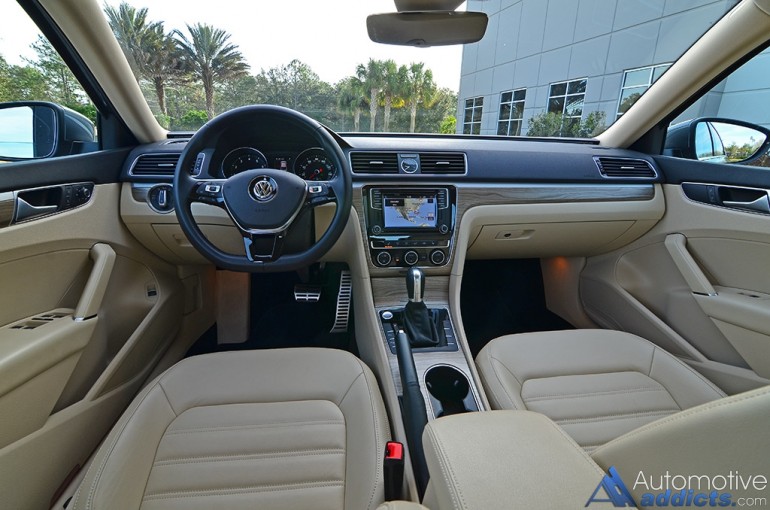 The revised interior of the 2016 Passat mimics the tradition of modern-day Volkswagen in that the dashboard is padded but additional soft-touch surfaces are kept to a minimum. Though, the hard plastics used down the center stack and lower portions of the dashboard don’t giveaway cheapness as they are made of nice texture throughout. The limited wood trim and painted pieces add a nice subtle contrast to the cabin, as does the darkened floors against my test vehicle’s light-colored full leather seating.

Seating positions are ideal, and the Passat makes way for individuals well over 6-feet tall up front or in the back seats. The ample adjustability of the 8-way power driver’s seat and manual tilt/telescoping steering wheel adapt to just about any body size, short or tall. The dashboard’s controls and instrumentation are all clear and concise. The updated infotainment system combines and user-friendly interface that detects your hand to bring up menu sets relevant to the current features menu but is fed through a rather smallish 6.3-inch color touch screen. The dual-zone climate controls proved to be somewhat of a disappointment due to Volkswagen’s lack of temperature increments towards warmer temps where it cuts off at 80-degrees and a HI setting. Fundamentally, the Passat’s heating fails to conform to Florida’s winter where you are looking for that midway point between 80-degrees and full-on “HI” heat. 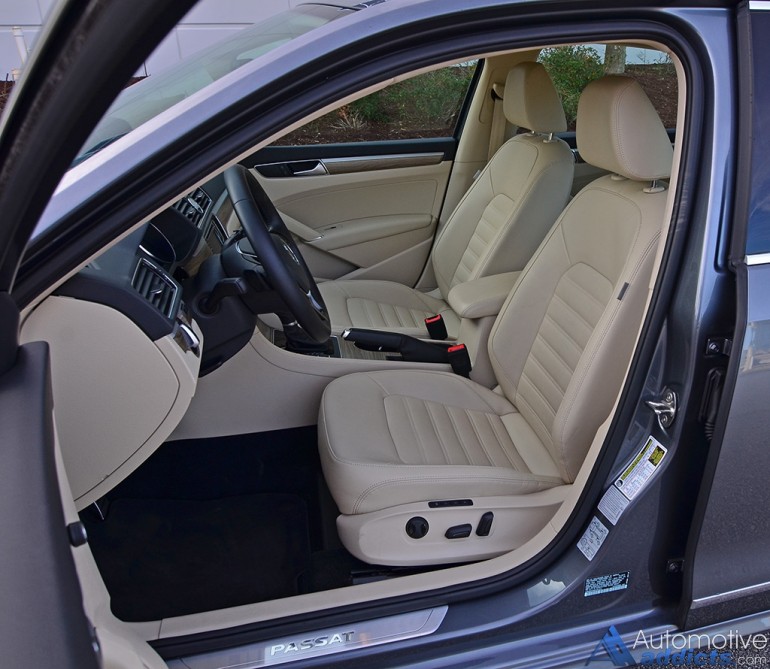 The stylish but contemporary exterior of the 2016 Passat don’t depart far from its recent years. The Passat remains mostly unmistakable while my test vehicle in its top SEL V6 Premium trim adds several standard features to help it stand out from the rest of the lineup. Among those features you get auto LED headlights, LED daytime running lights, fog lights, LED taillights, 18-inch alloy wheels, and a new for 2016 R-Line trim livens up the exterior even further with 19-inch wheels and unique exterior trim pieces. 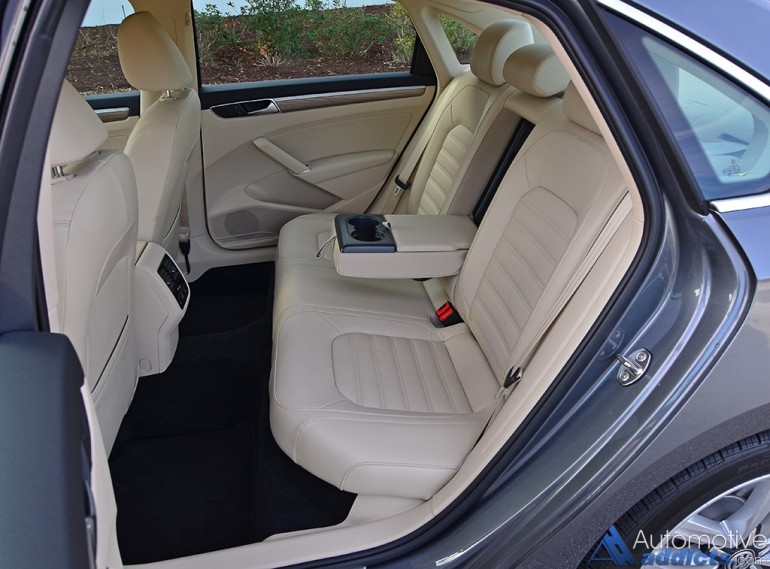 Volkswagen has kept on up on the path to provide new-age tech features on my Passat SEL V6 test vehicle, offering adaptive cruise control, rear cross-traffic alert, blind spot monitor, front assist (collision warning and auto emergency braking and a lane keep assist system that is more reactive than proactive about steering the vehicle to retain lane placement. The lane assist system seemed to be rather lazy, almost an after-the-fact case that forced me to disabled it after only 15 miles into my first drive. Combined with an excellent infotainment system, apart from a screen that is much smaller than found in the Passat’s competition, the crisp-sounding Fender audio system and Apple CarPlay integration proved to be some of my favorite parts. Other highlighted features included on my test vehicle were automatic rain-sensing wipers, keyless entry and ignition, auto-dimming rearview mirror, heated front and outboard rear seats, upgraded Car-Net telematics, and a hands-free trunk opener with foot sensor.

As the 2016 Volkswagen Passat comes mostly pre-configured in each trim level subset, the SEL V6 is a decent value at an as-tested price of $37,655. Base pricing for the base Passat S is at a low $22,440, which is quite admirable for its nearly full-size proportions, comfort and a handful of standard features.

>> Get the best price on the Volkswagen Passat from a network of local dealers now. <<