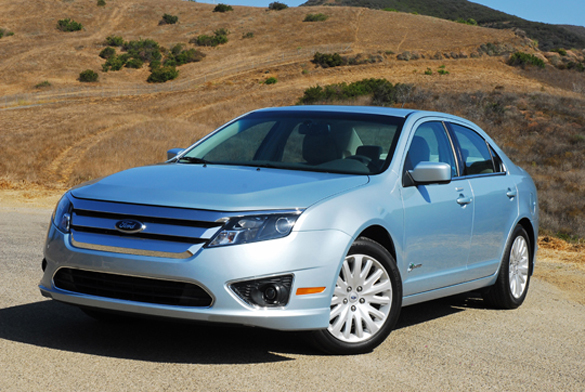 “Highest MPG Sedan On The Road”

The all-new 2010 Ford Fusion hybrid is America’s most fuel-efficient midsized sedan with a certified 41mpg/city and 36mpg/highway rating, topping the Toyota Camry hybrid by 8mpg/city and 2mpg/highway.  If you drive conservatively you can further stretch those numbers substantially. 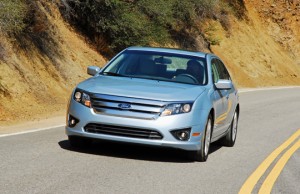 Besides being a good looking, fun and easy to drive midsize sedan that comfortably seats five-adults, you are saving money in the process with the most advanced hybrid propulsion system on the market. The second-generation powertrain system combines the best attributes of the gasoline engine and electric battery-driven motors to deliver the optimal experience for you in terms of driving performance and fuel economy.

The propulsion system for the 2010 Fusion hybrid transitions between gas and electric power and back efficiently and seamlessly.  The overall system upgrade allows the Fusion hybrid to operate longer at higher speed in electric mode.  It can operation up to 47mph in pure electric mode, approximately twice as fast as some competitors.  The city driving range on a single tank of gas is expected to be more than 700 miles.  If you do little or no freeway driving and keep speeds below 50mph, you will use very little gas and stretch that 700 mile expectation substantially. 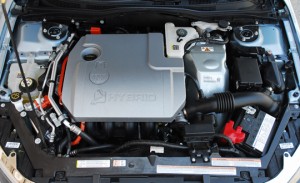 The next-generation hybrid system features a new 2.5 liter four-cylinder engine rated at 156hp at 6,000rpm and 136lb.ft. of torque at just 2,250rpm, running the proven Atkinson cycle designed engine that is mated to an electrically controlled continuously variable transmission (e-CVT) that runs smooth and silently.  The combined power from the gasoline and electric motors equals to 191hp which is plenty of power for highway driving.

The Intake Variable Cam tuning (i-VCT) allows the Fusion hybrid to more seamlessly transition from gas to electric mode and back.  The spark and cam tuning are varied according to the engine load to optimize efficiency and emissions.  A new enhanced electronic throttle control reduces airflow on shutdowns thus reducing fueling needs on restarts.  A wide-band lambda sensor analyzes the air-fuel ratio and adjusts the lean/rich mixture accordingly to keep the system in balance and to further minimize emissions.  An added voltage converter boosts the voltage to the traction battery to operate the motor and generator for more efficiency.

A new smaller, lighter nickel-metal hydride battery has been optimized to produce 20% more power.  Improved chemistry allows the battery to be run at a higher temperature and it is cooled using cabin air.  A new high-efficiency converter provides 14% increased output to accommodate a wider array of vehicle features.  A new smarter climate control system monitors cabin conditions and only runs the gas engine as needed to warm the cabin.  It also includes an electric air-conditioning compressor to further reduce engine use.  The regenerative brake system captures the energy normally lost through friction in braking and stores it.  Nearly 94% energy recovery is achieved by first delivering 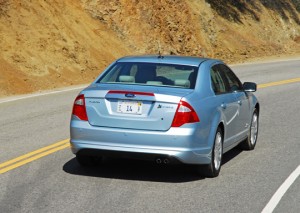 It’s all pretty technical but Ford engineers has been doing their work diligently and have come up with the best and most fuel efficient hybrid system on the market. 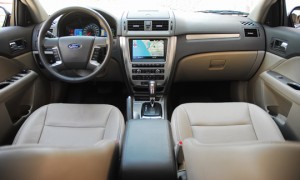 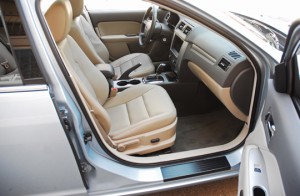 Mechanically, the Fusion hybrid comes standard with the I-4 SEL’s fully-independent suspension system that provides a smooth ride with exceptional handling capabilities during cornering.  The Fusion hybrid comes with its own unique low friction, electronically controlled rack & pinion steering system with power assist that always gives you a good feel for the road and is boosted just right for slow speed parking maneuvering and high-speed traveling.  Also, the four-wheel steel disc brakes are unique to Fusion hybrid and feature ABS and Integrated Regenerative Braking along with AdvanceTrac 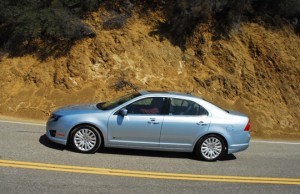 Electronic Stability Control to keep you on your chosen path on slick surfaces and during severe braking times.

What the Fusion hybrid comes with and the I-4 SEL doesn’t is a 110-volt power point,

The truly unique feature inside the Ford Fusion, and what I think is the ‘industry’s best’, is the Liquid Crystal Display (LCD) SmartGauge cluster with EcoGuide.  It is an easy to see and understand innovative new instrument cluster that provides real-time information to help you maximize fuel efficiency.  The unique design uses two high-resolution, full-color LCD screens on either side of the analog 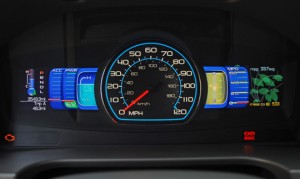 speedometer that can be configured to show different levels of information, including fuel and battery power levels, and average and instant mpg.  To the right, growing leaves and vines track and reward your driving efficiency.  Unlike other hybrids, all of the information is on the instrument cluster and not from a screen on the center stack.

The interior reflects a more contemporary technical look with metallic finishes on the all-new instrument panel, center console, doors and steering wheel.  The dashboard is finished with a soft upper and lower skin.  Displays and switches also feature a contemporary Ice Blue Lighting. 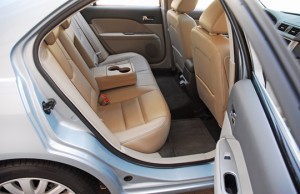 The all-new 2010 Ford Fusion Hybrid carries a base price of just $27,270.00 for this nicely loaded midsize sedan that truly stretches your fueling dollars.  My test car came with the following options that furthered my enjoyment when driving-Ford Navigation System with voice activation, heated side mirrors with lane 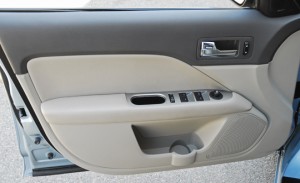