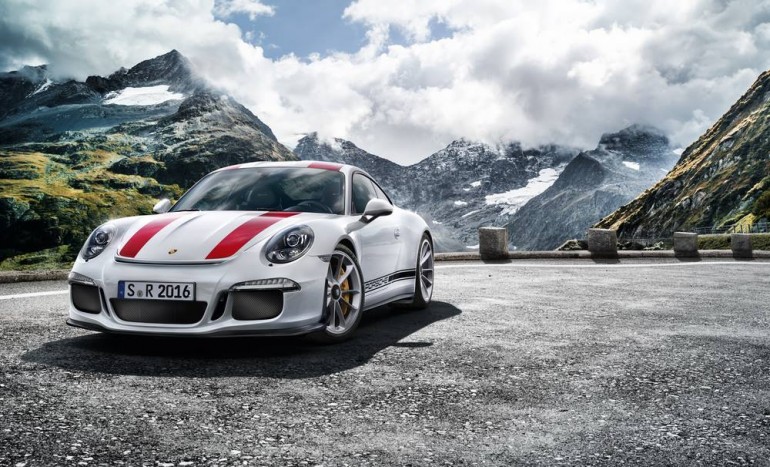 Sometimes car manufacturers amaze us with little surprises every once in a while. With us being hardcore automotive enthusiasts, we are happy to report that Porsche has officially revealed their new 911 R, which exclusively comes with a Naturally Aspirated 4.0-liter flat-six-cylinder engine (taken directly from the current 911 GT3 RS) with 500 horsepower at 8,250 rpm mated to a 6-speed manual transmission to power the rear wheels. This gem will be in limited production with only 991 worldwide examples for the fetching at a price of  £136,901 ($190,000usd). Not only do you need to start saving your coins, but you will have to be quick to get on the list, which is probably nearly filled with future buyers already. 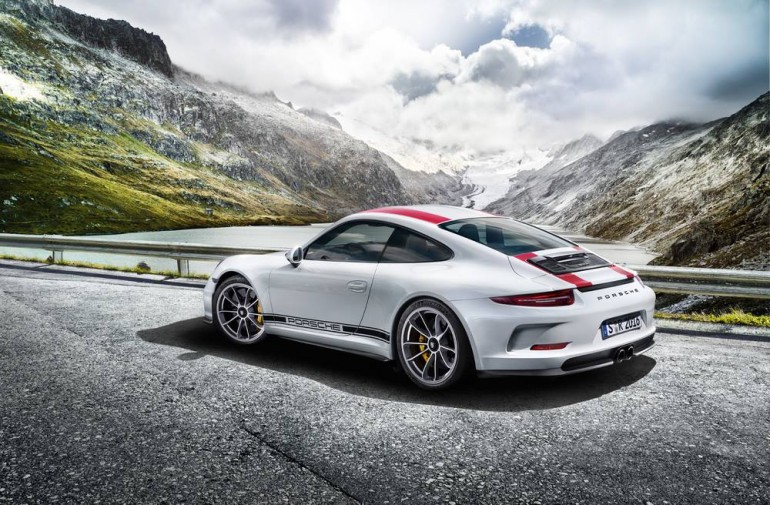 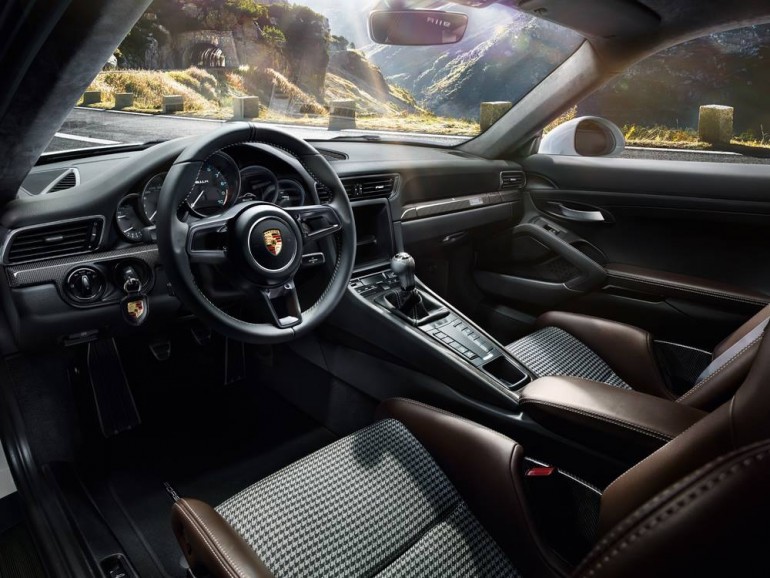 Unveiled today at the 2016 Geneva International Motor Show, the new Porsche 911 R is a pure-bred sports car built to conform to a time-honoured formula; a powerful 500 hp (368 kW) four-litre naturally-aspirated flat-six engine driving the rear wheels, a six-speed manual transmission, and a lightweight body. It is also limited to just 991 examples worldwide.

These characteristics place the 911 R firmly in the tradition of its historic namesake: a road-homologated racing car from 1967. Produced as part of a limited production series, the original 911 R was campaigned in iconic road races of the period, such as the Tour de France and Targa Florio, and also in world record runs.

Like its legendary predecessor, the new 911 R offers an unfiltered driving experience, delivered via systematic lightweight construction and a devotion to maximum performance: this special model has an overall weight of 1,370 kilograms and is thus the lightest version of the 911. With a high-revving six-cylinder naturally aspirated engine and manual sports transmission, Porsche is once again underlining its commitment to especially emotional high-performance sports cars. Developed in the Motorsport workshop, the 911 R extends the spectrum of high-performance naturally-aspirated engines alongside the motor sport-inspired, track-bred models 911 GT3 and 911 GT3 RS.

From a standing start, 0-60 mph is possible in 3.7 seconds. In keeping with the pure character of the 911 R, it is available exclusively with a six-speed manual sports transmission. The short gearshift travel emphasises the interactive driving experience. The forward thrust of the 911 R continues to a potential top speed of 201 mph (323 km/h), and Combined NEDC fuel consumption is 21.2 mpg (13.3 l/100 km).

A thoroughbred driving machine: technology from the race track
The 911 R could almost have been made for twisting roads. Fitted as standard with specially-tuned rear-axle steering, direct turn-in and precise handling is guaranteed while maintaining high stability. In addition, the mechanical rear limited slip differential ensures maximum traction.

Ensuring the greatest possible deceleration are Porsche Ceramic Composite Brakes (PCCB), also fitted as standard. The discs measure a generous 410 mm diameter on the front axle and 390 mm on the rear. Ultra High Performance Tyres of 245 mm width at the front and 305 mm width at the rear provide assured contact to the road. These are mounted on lightweight, forged aluminium wheels with centre-locking and matt-finish.

Motorsport development has adapted the control systems of the Porsche Stability Management (PSM) for the 911 R, tailoring the car for a focused and authentic driving experience. An optional single-mass flywheel for the engine is one example of this, resulting in a significant improvement in spontaneity and high-rev responsiveness of the engine. A double-declutch function – activated by pressing a button – for perfect gearshifts when changing down is also part of the repertoire of the 911 R.

For broad everyday versatility, a lift system can also be ordered: it raises ground clearance of the front axle by approximately 30 mm at the touch of a button.

With an overall weight of 1,370 kg, the 911 R undercuts the 911 GT3 RS by 50 kg. The bonnet and front wheel-arches are made of carbonfibre and the roof is magnesium, which reduces the centre of gravity. Rear windscreen and rear side windows are lightweight plastic. Additional weight-saving factors are the reduced sound insulation in the interior and the omission of a rear bench seat.

The optional air conditioning system and the audio system also hint at the intense slimming regime.

Wolf in sheep’s clothing: classic 911 look with GT motor racing technology
From the exterior, the 911 R gives a reserved impression. At first sight, the body resembles that of the Carrera. The nose and rear body will be familiar from the 911 GT3, and hint at the birthplace of the 911 R: namely the motorsport department in Flacht. In technical terms therefore, the 911 R has a lot to show under the skin: namely the drive technology from the 911 GT3 RS.

All the lightweight components of the body and the complete chassis originate from the 911 GT3. However, with a view to road use, the body does not have the fixed rear wing familiar with that model. Instead, a retractable rear spoiler shared with the Carrera models and a bespoke aerodynamic diffuser beneath the rear underbody provides the necessary downforce.

The front and rear apron come from the 911 GT3, with a re-designed spoiler lip installed on the front. The sports exhaust system consists of the lightweight construction material titanium.

Continuous coloured stripes in red or green over the entire mid-section of the vehicle provide a visual cue to the legendary predecessor. A further leitmotif is provided by the ‘Porsche’ script along each side of the vehicle.

The driver and front passenger sit in a carbon-fibre bucket seat, trimmed with bespoke fabric centre panels in Pepita tartan design, a nod to the first 911 in the 1960s. Fabric pull straps on each door are a familiar hint to the focused intent of all 911 models from the GT department.

Ahead of the driver sits an R-specific 360 mm diameter GT sport steering wheel, and a short shift gearlever – not to mention the obvious clutch pedal in the footwell – contribute to the specific interior ambience. And underlining the special nature of this limited production model, carbon trim strips in the interior with an embedded aluminum badge on the passenger’s side indicate the limited number of each 911 R.

Launch and prices
The new Porsche 911 R is available to order from today in Porsche Centres in the UK and Ireland, priced from £136,901. Limited to 991 units worldwide, first UK deliveries are scheduled for June.

The 911 R is arguably the ultimate road-focused 911 in the 53 year history of the model. It is certain to be appreciated by long-standing fans of the 911, and in particular those customers that have consistently owned, lived with and driven successive generations of this iconic sports car.