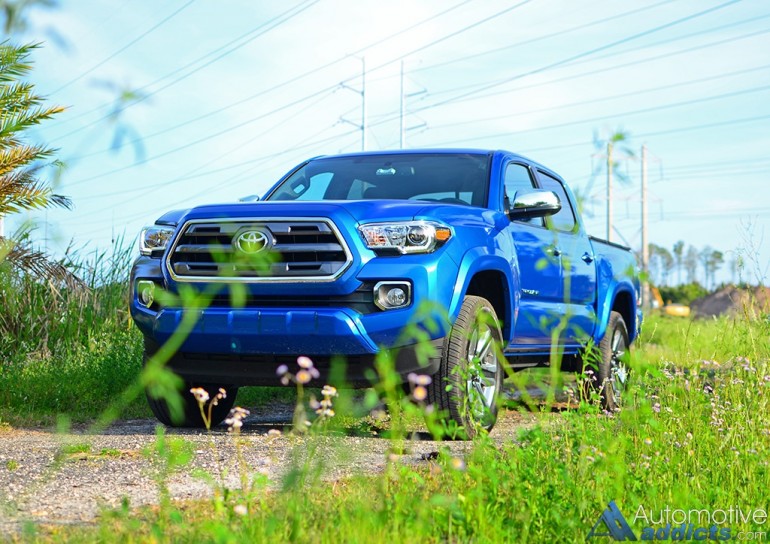 When it comes to the midsized truck segment, there are only a few offerings that immediately come to mind. For the past couple generations, Toyota’s Tacoma pickup truck has consistently captured record sales numbers garnering the attention of many from its nearly endless trim and configuration offerings. For the 2016 model year, the Toyota Tacoma is redesigned improving upon a rugged formula yet retains its unsurpassed versatility in its ability to be compliant and comfortable in everyday transportation situations backed up by its long-touted brand reliability and quality.

>> Get the best price on the Toyota Tacoma from a network of local dealers now. << 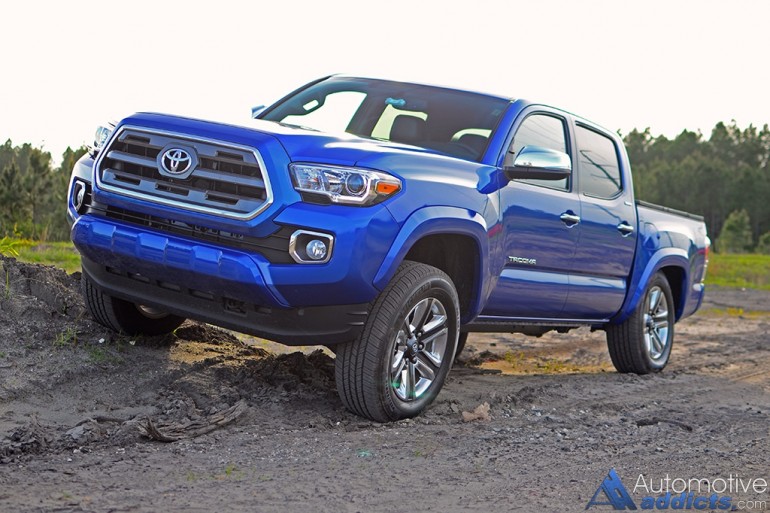 The new 2016 Toyota Tacoma retains its off-roading prowess and improves upon its overall performance with a new 3.5-liter V6 engine touting 42 more horsepower over the outgoing 4.0-liter. Now, with a total of 278 horsepower and 265 lb-ft of torque, V6 Tacomas have a smoother power delivery and ability to tow up to 6,800 pounds. Mated to a 6-speed automatic transmission, the V6 is adapted well to both on-road and off-road adventures. Initially, the power delivery is somewhat uninspired unless you really get on the throttle. Often, at mid-throttle, the new Tacoma seems as if it is being held back by extra weight and usually requires a full three-quarters to full throttle to really get things moving. However, the overall balance of ride quality on paved roads and the ability to rip through rough terrain has never been better. My 4×4 top-trimmed Limited Double Cab Tacoma test vehicle proved to handle itself quite well on a few of my off-roading excursions as well as a few run-ins with large dirt mounds. Never did the Tacoma’s 4×4 system with an electronic transfer case, automatic limited slip differential, and new V6 power feel inadequate. 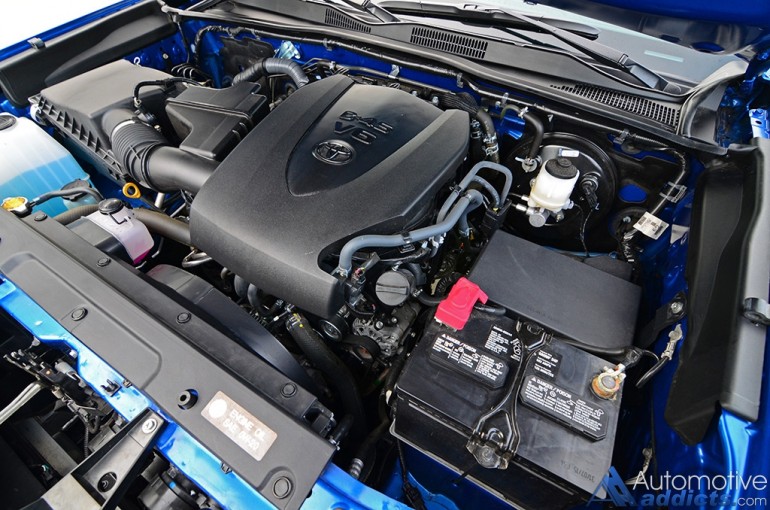 Fuel economy for the 2016 Tacoma leaves room for improvement but is slightly improved over its predecessor with an EPA estimated 18 mpg city, 23 mpg highway, and 20 mpg combined. While the numbers aren’t very impressive, they are consistent and precisely what I was able to return during my time with the new Tacoma 4×4 Limited.

At the base level, the new 2016 Toyota Tacoma gets a 2.7-liter 4-cylinder engine for the SR and SR5 trims with either a 5-speed automatic or 6-speed manual transmission. There is also the availability of a manual transmission for other trim levels, even the 4×4-equipped Tacomas with the V6 engine, a rarity in itself for any size truck. 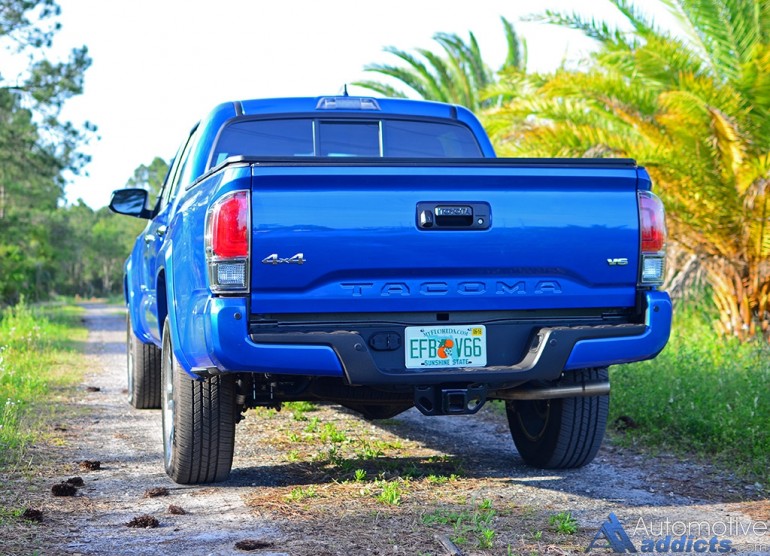 The added comfort in the new 2016 Tacoma is proof of Toyota’s willingness to answer consumers with what they want in a midsized truck. Not to mention, there is a plethora of trim options and configurations that in all make for over twenty different setups you can get in the new 2016 Tacoma. The large 18-inch wheels with high profile tires and enough ground clearance paramount all other midsized trucks when it comes to true off-roading capabilities. The new 2016 Tacoma retains its king-of-the-hill status in the department of getting down and dirty on rough terrain, and it shows even more when you opt for the 4×4 trims, including the well-endowed TRD Off-Road or Limited 4×4 trims. Moreover, such models include their very own GoPro mount on the windshield, to further emphasize the fun factor that you might want to capture on video. Yes, the Toyota theme “Let’s go places” is quite fitting here. 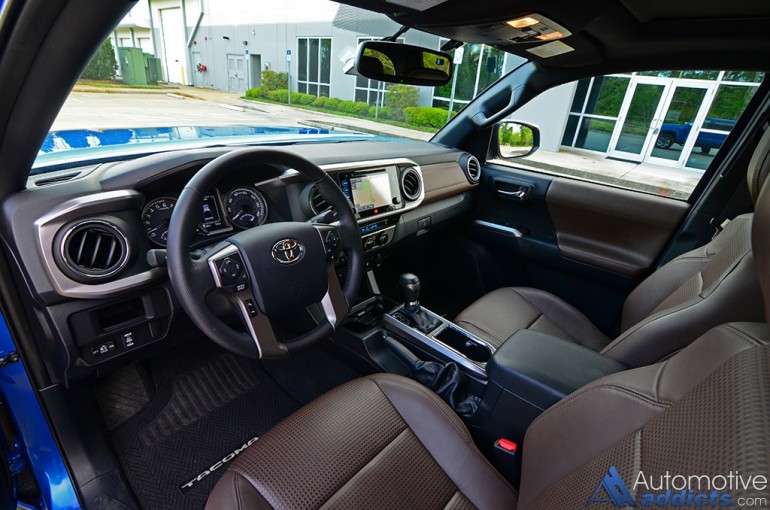 For its complete redesign, with mostly similar dimensions of its predecessor, the new 2016 Tacoma’s interior is revamped for more functionality, comfort and added available feature sets. My loaded-up Tacoma 4×4 Limited features dual automatic climate control through simple turn knobs, limited buttons, and a single row monotone-blue-color LCD screen. The driver’s gauge cluster features large numbering with a center configurable color LCD information screen. The new infotainment system, included with a 7-inch touch screen as part of the Limited trim level, is user-friendly and easy to navigate through the menu sets and features just as all other recent renditions of Toyota’s Entune system with a limited suite of apps that integrate with your cell phone. For connectivity, there is a single USB port, AUX port, and Bluetooth phone connectivity with audio streaming. The Limited Tacoma also gets a wireless phone charging platform under the dashboard. 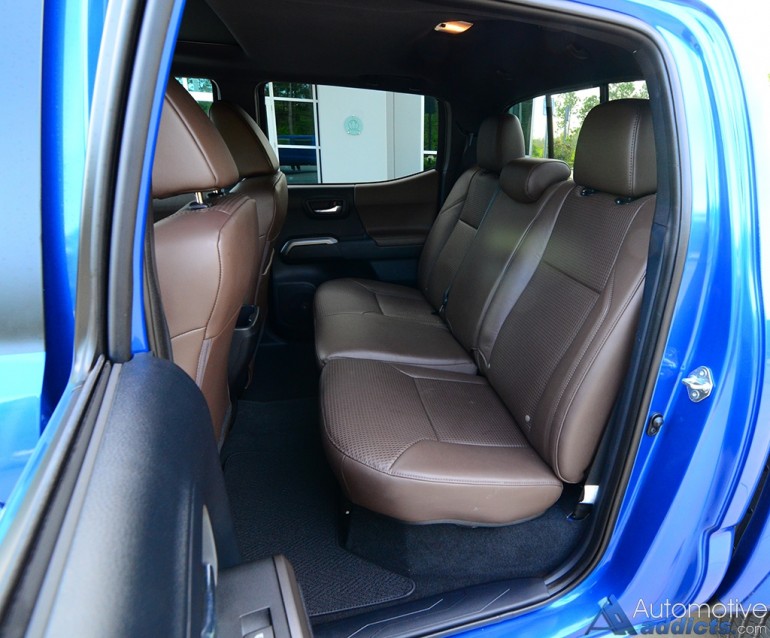 The leather seats found in my 2016 Toyota Tacoma 4×4 Limited, which comes exclusively as a Double Cab for the trim level, proved to be comfortable but visually look out of place as there is an abundant amount of black and dark gray hard plastics. The only items using the same color as the leather seats are soft-touch areas on the door trim and a limited surface on the passenger side dashboard. Otherwise, hard plastics overtake the overall mood and “feel” of the interior. Though, the new 2016 Tacoma’s interior is a significant improvement over the last generation with better ergonomics and placement of controls and buttons. Never do the plastics appear to cheapen the interior, as there is a respectable level of quality in the fit and finish. 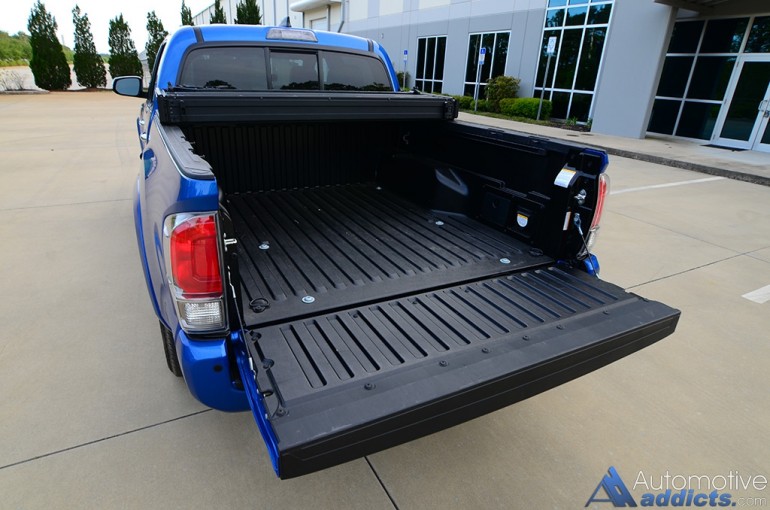 The seating area is decently proportioned for five passengers. The rear split 60/40 seat backs make way for easy-accessed storage as does the seat bottoms that fold forward to open up a storage compartment for added cargo. The seating position for the driver seems a bit low at times and lacks a height adjustment. Otherwise, the new 2016 Tacoma in its top Limited trim is quite comfy for its purpose. 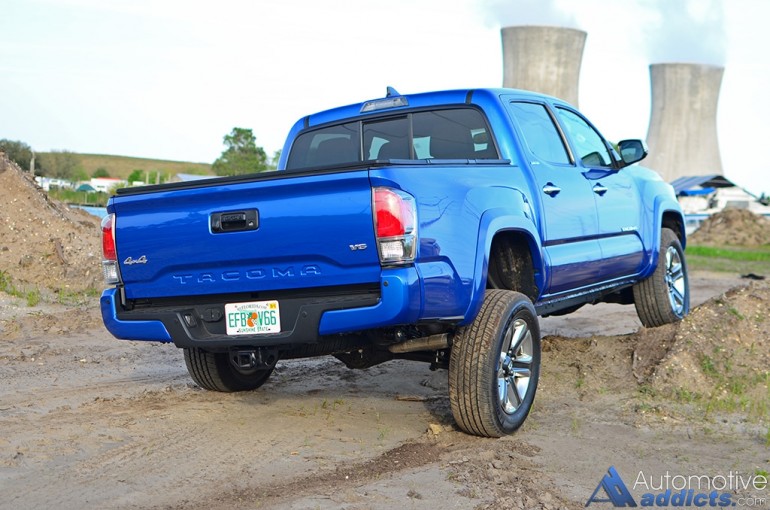 >> Get the best price on the Toyota Tacoma from a network of local dealers now. <<