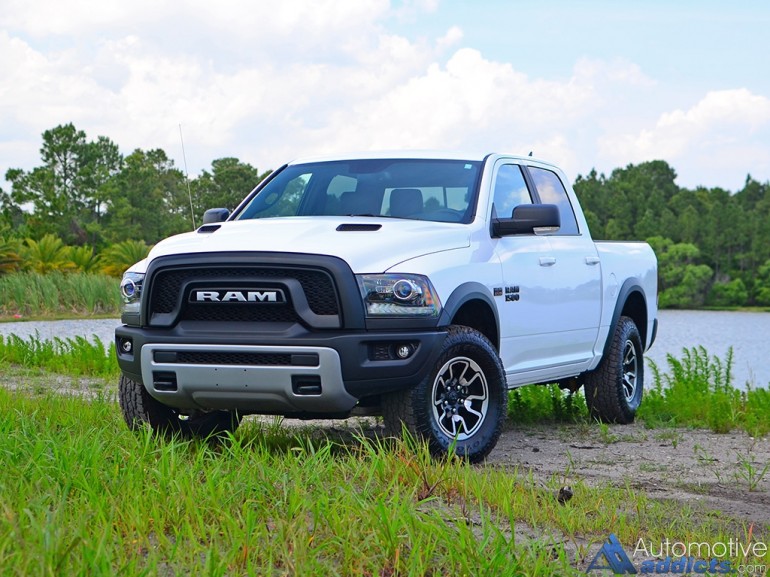 The full-size pickup truck segment has always been exceptionally competitive. Among the many different truck offerings in America, each manufacturer has had a perpetual objective of symbolizing their prized creations in a way that they are unmistakable for their rugged abilities, functional comfort, and unique looks not to be confused with the competition. Ram’s latest quest takes their 2016 model year in certain trims to offer a slightly new face through a grill literally spelling out the Ram letters with cartoonish-sized tailgate letters ensuring that there will never be any guessing game in identifying certain new models. 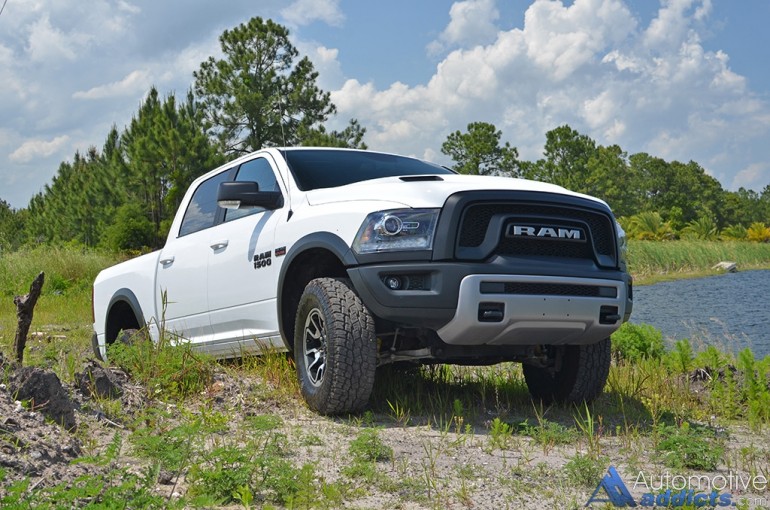 Taking the off-roading abilities and ruggedness of the Ram 1500 trucks in its crew cab configuration, the new Ram 1500 Rebel is an attempt to offer a little something extra for conquering objectives when the going literally gets tough. While the new Ram 1500 Rebel isn’t said to be a direct answer to Ford’s F-150 Raptor, you can’t help but think such by the menacing looks of the new Ram Rebel with its darkened emblems, large black grille encompassing the new Ram-lettered face, and large knobby LT285/70R17 (33-inch diameter equivalent) tires wrapping 17-inch aluminum wheels with a matte black pocket coatings. 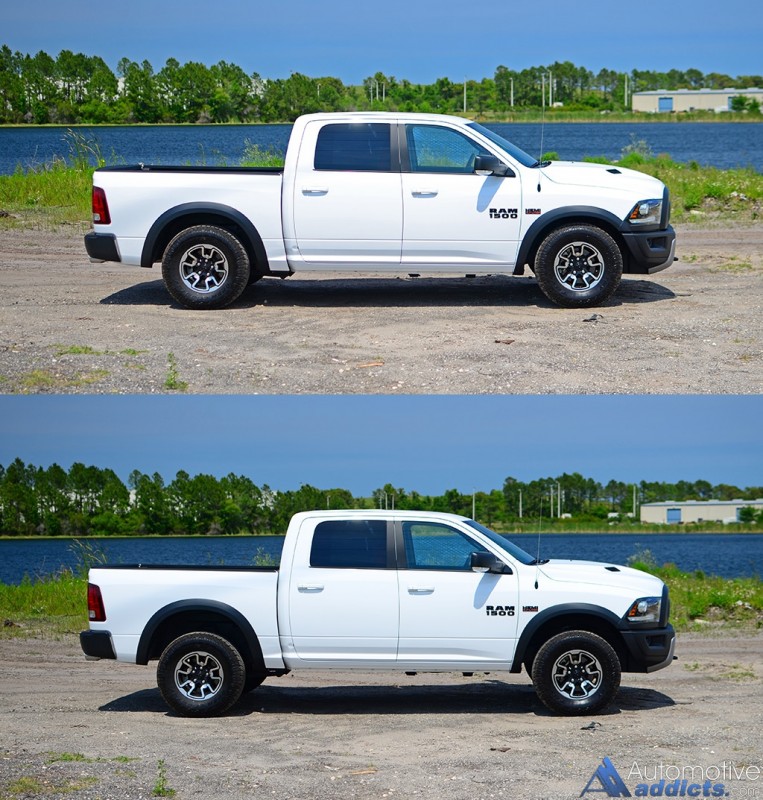 The off-road chops for the new Ram 1500 have never been so defined visually inside and out of the new Rebel. With its appropriate name, the Rebel stands out in the vast crowd of as many as eight available trims for the 1500 and a plethora of configuration offerings within the family of Ram trucks. In that, the 1500 Rebel can be had with two engine choices, a 3.6-liter V6 or the 5.7-liter HEMI V8 with 395 horsepower and 410 lb-ft of torque found in my test vehicle. 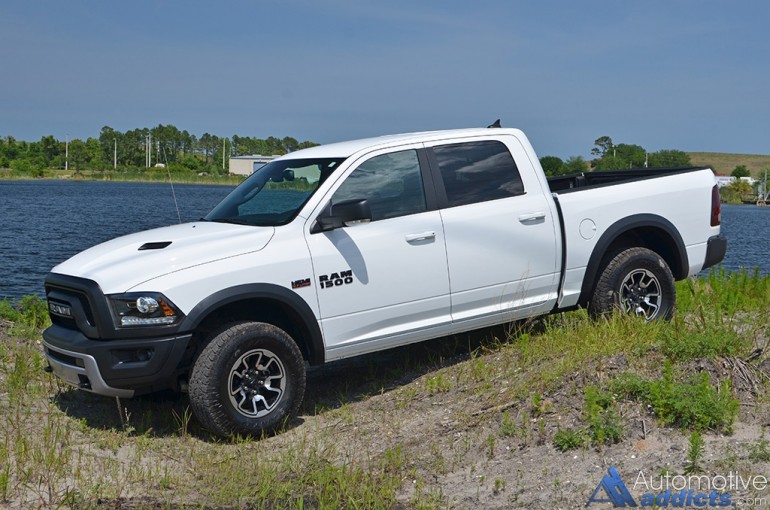 Performance figures for the new Ram 1500 equipped with the 5.7-liter HEMI V8 engine, 4×4 system with a lockable 4WD high/low, and a ZF-sourced 8-speed automatic transmission are respectable. Zero to 60 mph time is about 6.6 seconds while the handling of the Ram 1500 Rebel is surprising thanks to its 4-corner and adjustable air suspension system that automatically lowers the vehicle at highway speeds for a more aerodynamic profile. There is no getting around the Ram 1500 Rebel being a large truck. Though, Ram makes everything simple with an optional rearview camera, park assist system, rotary gearshift dial, massively wide power-folding rearview mirrors, and a clever Entry-Exit height air suspension setting to lower the truck for a much easier entry and exit height. 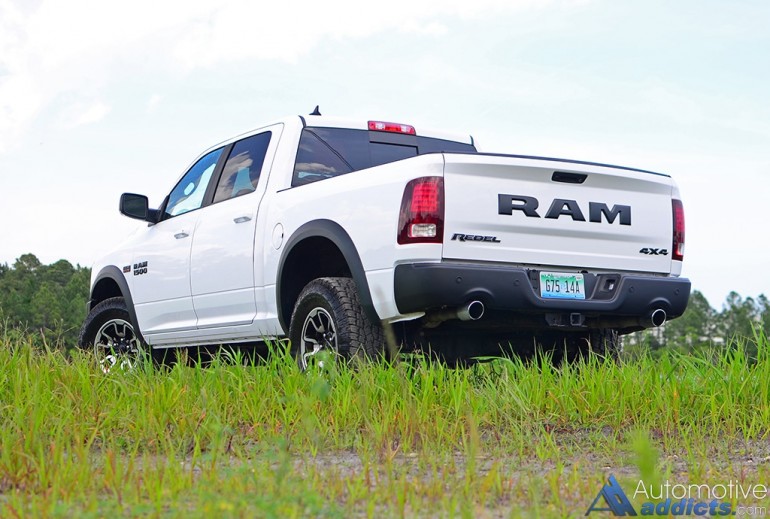 The ride quality of the new Ram 1500 Rebel equipped with its trim-level-standard air suspension system is admirable for such a large truck. While suspension travel may not be as vast as something you get on Ford’s Raptor, the Ram Rebel adapts quite well to most driving surfaces. With a high-rise off-road mode for the air suspension, the Rebel literally rises to the occasion allowing its 33-inch-in-diameter tires to do their job clawing at loose terrain. On the road, the Rebel dampens the surface well thanks to its versatile Bilstein dampers, a page taken from its bigger Ram Power Wagon sibling. Braking is also assuring with a consistent and firm pedal at all speeds. The 8-speed automatic transmission shifts smoothly mostly landing in the proper gear allowing the beefy HEMI V8 engine to quickly spin to the ideal rpm. Towing capacity is up to 9,300 pounds, and out back you can expect to load up to 1,880 pounds in the bed without any issues. Without any added weight, the Ram 1500 Rebel 4×4 gets an EPA-estimated 15 mpg in the city and 21 mpg highway. I was able to conjure just about 22.3 mpg on the highway with an empty bed and no additional passengers in part thanks to the cylinder deactivation management seldom running on 4-cylinders when maintaining a steady speed. 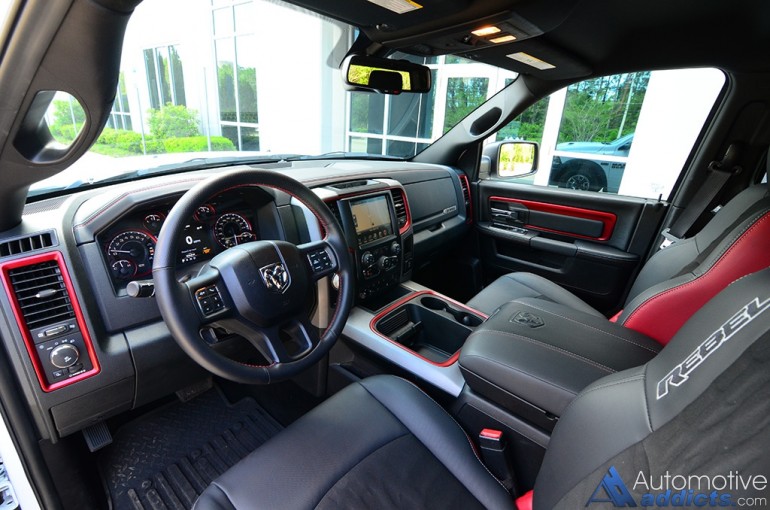 Inside of the new Ram 1500 Rebel 4×4 is a familiar cabin but slightly updated to feature a new center console with a nifty storage area for your cell phone or tablet device as a standard feature across the board for Ram 1500 trucks. The new mostly soft-touch dashboard gets the customary labeling signifying my test vehicle as being the Rebel trim with a matching intro graphic for the gauge cluster’s color information screen. The latest iteration of the brand’s well-praised and user-friendly infotainment system with GPS navigation fed through an 8.4-inch touch screen comes as part of a $1,105 Uconnect package. Other grouped option packages, all part of selecting the Rebel trim, includes a Luxury Group package with LED bed lighting, auto-dimming review mirror, power-heated and folding exterior mirrors, Rear Camera and Park Assist Group package, a trailer brake control, and a spray-in bedliner. 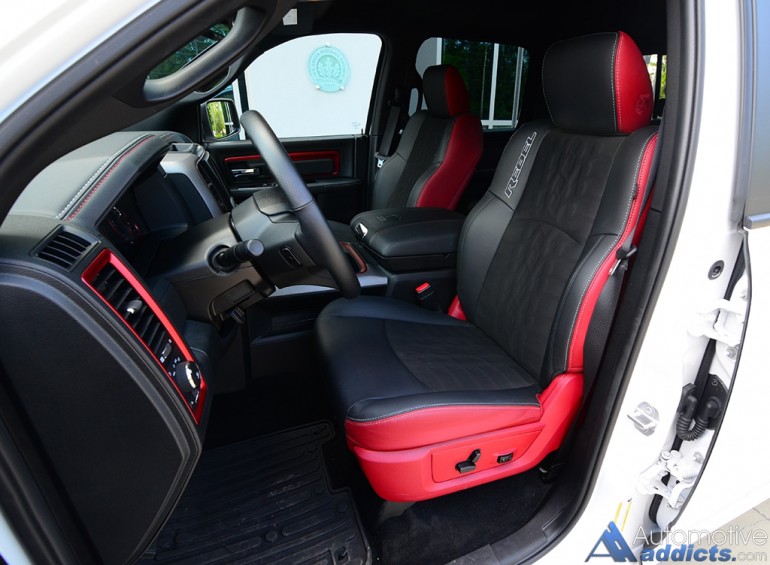 The seating area is plentiful for four adults of virtually any size. Yet, the rear seating’s fifth middle passenger must slightly straddle the infamous transaxle tunnel hump with a shallow seat bottom, something you don’t want to stay in for a long trip. Speaking of a long trip, the Ram 1500 Rebel 4×4 has a massive fuel tank, a total of 26 gallons enabling a cruising range of up to 572 miles if you can continually muster out its estimated 21 mpg highway figure. 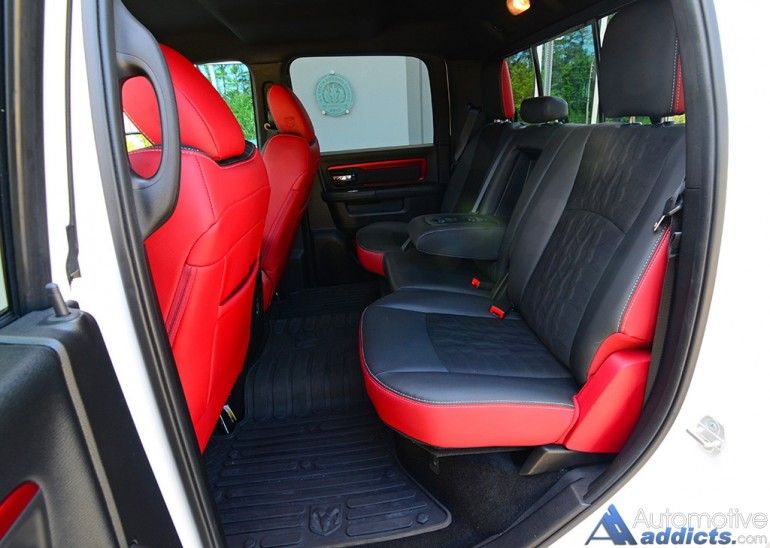 Missing from the formula, which somewhat undermines the Rebel trim signification, is an automatic climate control. Instead, you make due with basic manual controls through the otherwise feature-rich Uconnect infotainment system and a small subset of physical buttons. Another desired feature that is missing from my Ram Rebel test vehicle is push-button start and a smart-keyless entry/locking system. While these few shortcomings can be easily dismissed by those who have never used them, having such a robust and capable full-size truck you can’t help but think it needs something to complete the interior’s plush-appeal. Regardless, the 2016 Ram 1500 Rebel 4×4 is an admirable truck with a dash of extra off-roading capability thrown into the mix with the menacing looks to match.

At the as-tested price of $51,755 including a $1,195 destination charge, my 2016 Ram 1500 Rebel 4×4 plays along nicely for a value-added proposition in a full-sized rugged truck at the middle of several trim offerings but with a beefy HEMI V8 engine.