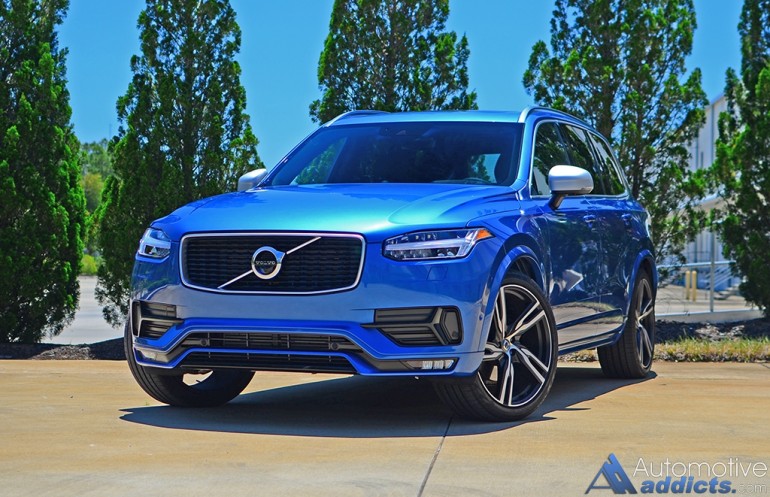 In my quest of driving nearly 800 cars over the course of the past ten years, there are those rare occasions that I experience a vehicle after it has received several awards and accolades. In somewhat of a backtrack in those experiences, my understanding from my fellow acquaintances in the automotive field – selecting such a vehicle is later vilified. As such, there is vilification in the latest test drive, the all-new 2016 Volvo XC90 T6 AWD R-Design, acclaimed as the 2016 North American Truck of the Year.

>> Get the best price on the Volvo XC90 from a network of local dealers now. << 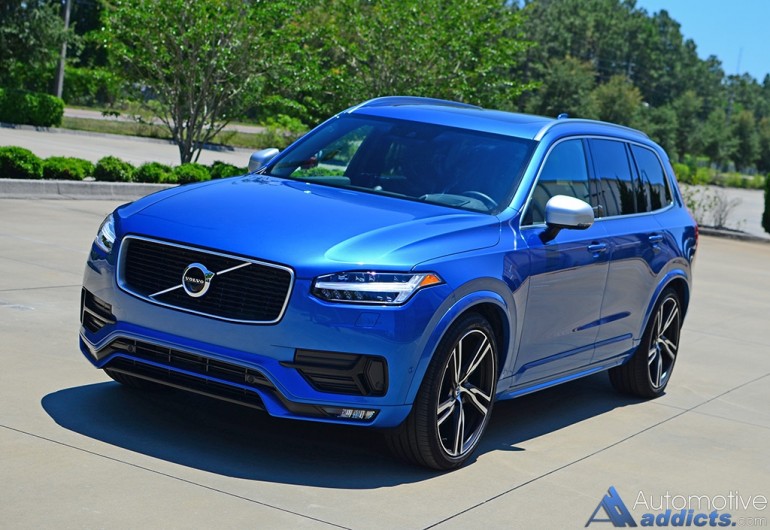 The all-new 2016 Volvo XC90 embarks on a new journey for the automaker literally coming out of nowhere to captivate the masses with something completely fresh and touted by some as one of the best-looking SUVs currently produced. History will tell us that Volvo has always been on the cutting edge of vehicle safety and the new XC90 is no different. It retains that signature formula with a plethora of active and passive safety features, such as anti-whiplash front seats, frontal-collision warning w/ pedestrian/cyclist protection, auto braking for frontal crash mitigation, run-off road protection, lane departure warning, land-departure intervention, blind-spot monitoring and a 360-degree surround-view camera. 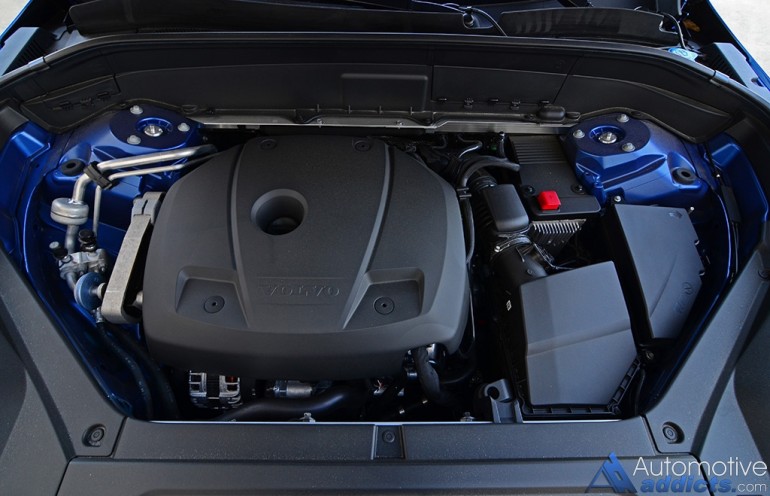 At the end of performance and luxury, the new XC90 embodies new principles adopted by Volvo, possibly a few pages taken out of the books of other automakers who reside on best seller’s list. The many chapters of what the new XC90 offers are perceived differently than most. For starters, the XC90 gets a choice of two engines and one hybrid powertrain. At the base, the XC90 T5 gets a 2.0-liter turbocharged 4-cylinder engine with 250 horsepower and 258 lb-ft of torque to power the front wheels through an 8-speed automatic transmission found on all models. From there, the XC90 T6 gets a Supercharged and Turbocharged 4-cylinder engine good for 316 horsepower and 295 lb-ft of torque. The XC90 Hybrid signified by its T8 nomenclature combines the Supercharged and Turbocharged engine with an 87-horsepower electric motor powered by a 9.2 kWh battery pack for a total output of 400 horsepower and 472 lb-ft of torque. 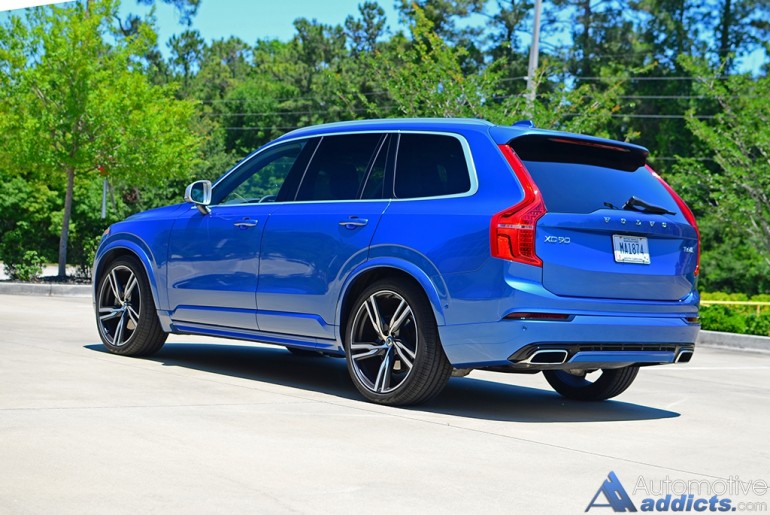 In my new Volvo XC90 T6 AWD R-Design trim, one of nine defined trim subsets for non-hybrid models, the Supercharged and Turbocharged engine provides steady power. While that can be taken a few different ways, the engine is plenty capable but fails to match the astonishingly sporty look of the XC90 T6 R-Design’s exterior. The mesh of a unique engine, one that combines the initial boost of a Supercharger that surges with a spinning turbocharger, makes for an compelling powerband, one that does its best to propel a hefty 4,300 pounds to 60 mph in about 6.6 seconds.

The Volvo XC90 T6 AWD’s powertrain isn’t disappointing, though, it isn’t all that inspiring either. To put it candidly, the XC90 T6’s power requires the 8-speed automatic transmission’s corporation at all times to put the engine band right in the sweet spot of about 3,500 to 5,500 rpm. Overtaking vehicles on the highway almost always requires a downshift through a couple of gears. The XC90 T6 never feels overly underpowered, it’s just not keeping pace with what you expect in the exclusive T6 R-Design sports appeal that still resides more on the comfort side than sport when it comes to sheer power output. 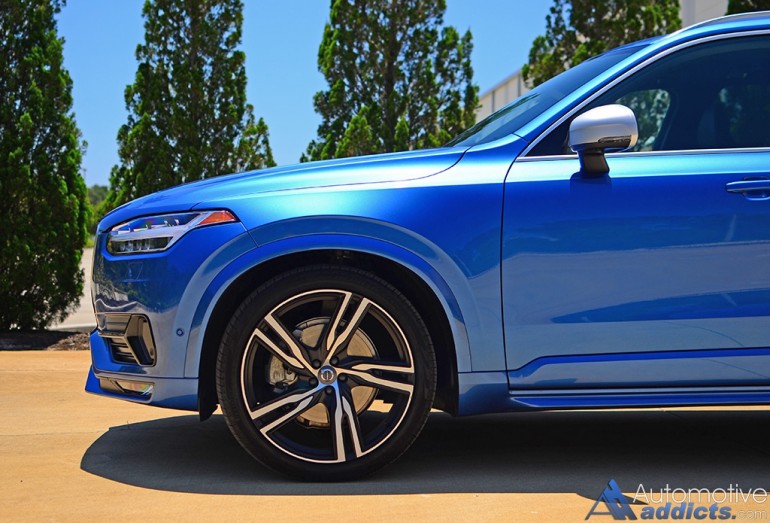 To the benefit of the new Volvo XC90 T6 AWD R-Design, it’s a looker especially in my test vehicle’s Bursting Blue Metallic paint and attractive but massively-sized 22-inch wheels wrapped in 275/35/R22 all-season tires. The ride quality of the XC90 T6 R-Design is admirable for its multi-purpose nature. In that, my test vehicle came with the optional 4-corner air suspension system that actively adjusts and levels the ride height dependent on the Drive Mode setting or off-balance loads. Use of a Dynamic suspension setting lowers the vehicle while the default Comfort setting rides about the same height as XC90s with the standard coil suspension setup. A unique off-road mode raising the body by a couple of inches, to tout the capable All-Wheel-Drive system, literally rises to the occasion. I found the overall ride quality to be a little on the harder side in Dynamic mode but more adaptive to road conditions to smooth them out in Comfort mode, which was surprising when you consider the stiff sidewalls of the large 22-inch tires. The collective of its drivetrain parts provided a drive that made the XC90 T6 R-Design feel as if it was much smaller than it is, which is a good thing if you are wondering. At times, you feel a front-wheel-drive power-split bias when accelerating out of turns leaving power transmitted out back to times when it is necessary to make up for front wheel slip. The light-to-the-touch steering effort at parking lot speeds makes maneuvering easy while the steering ads welcomed effort at speed. 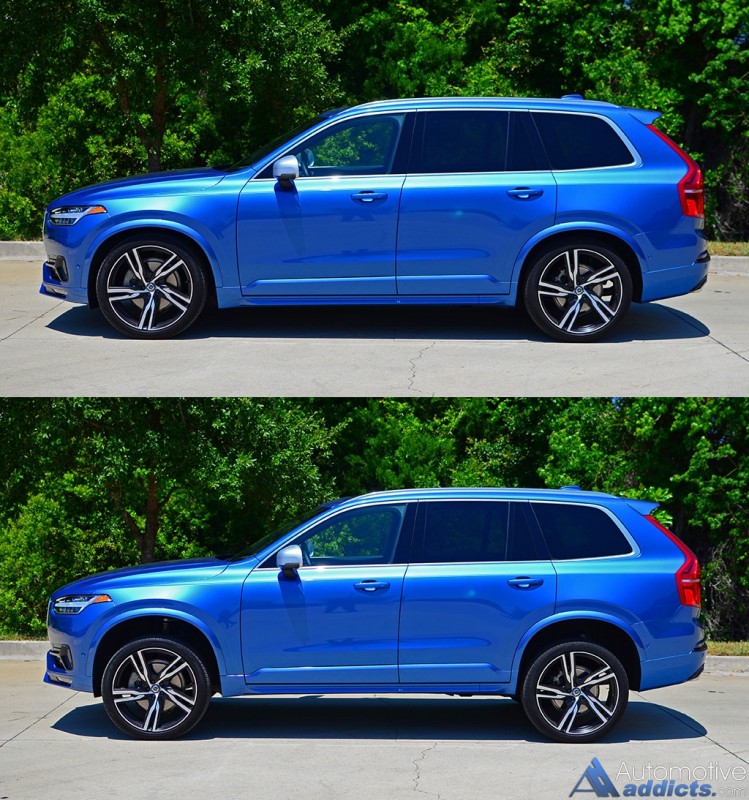 Fuel efficiency, with the idea of a force-fed 4-cylinder engine, doesn’t comply with what you would expect for a small powermill. The XC90 T6 AWD R-Design gets an EPA-estimated 20 mpg city and 25 mpg highway. While the figures are very consistent in what I observed, they aren’t exceptionally impressive. However, I do commend the idea of consistently getting 24 to 25 mpg on the highway without much of a deviation from the numbers. In its first year of production, the XC90 is deserving of its accolades and could still use some slight improvements that you could later call growing pains in the area of fuel efficiency for a 4-cylinder-powered crossover utility vehicle. 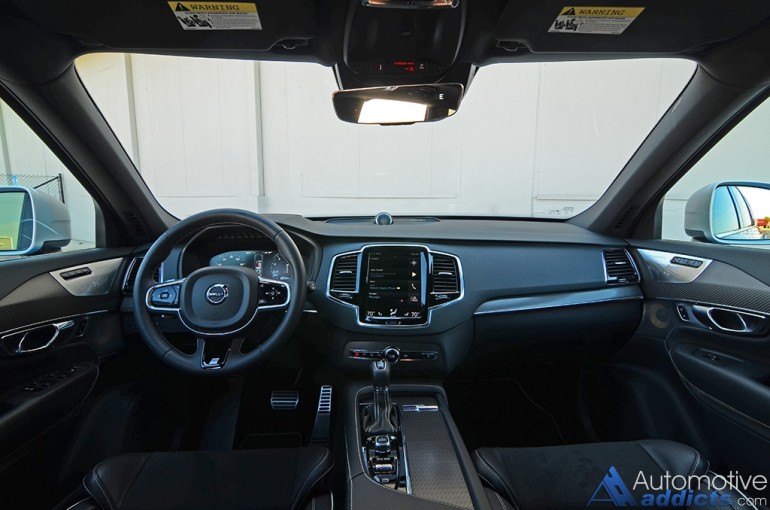 The interior of the new Volvo XC90 T6 R-Design is a major turning point in the plot that Volvo developed in its earlier iterations of SUVs. The cabin plays with an aggressive sporting theme for my T6 R-Design test vehicle model. The heated Nubuck and Nappa leather-trimmed seats up front with firm perforated leather bolsters hug you in a way to provide support in just the right areas without sacrificing long-haul comfort. The theme-matching second-row seats and third row seats are more of a flat design but prove to slightly contour to your hind parts upon setting for a few minutes, also a good thing. Large fixed headrests on all seats except for ones that can only be turned down when folding the third row are expected parts of Volvo’s safety inspirations that come before shear comfort. 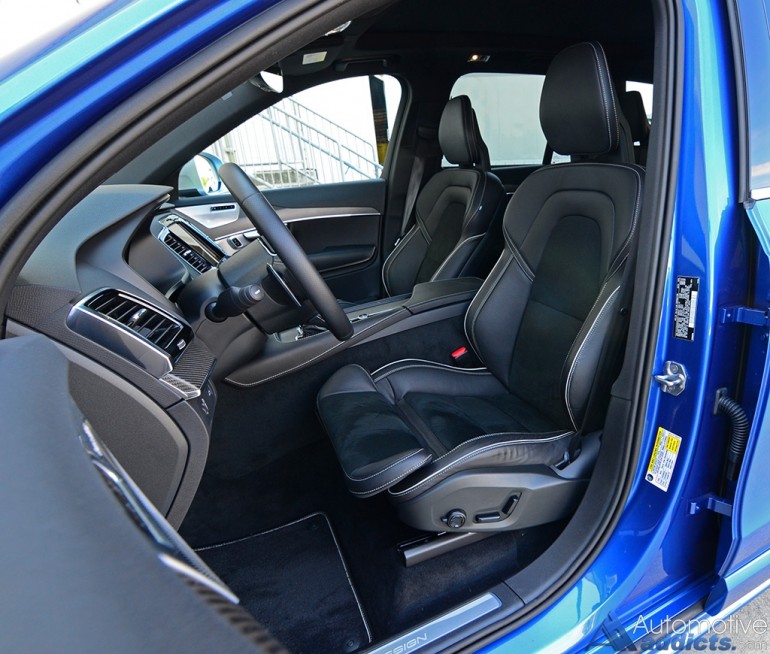 The seating area is decent, a clever approach by Volvo to utilize every inch of space allotted by a three-row crossover utility vehicle with a 117-inch wheelbase. The front and second-rows have generous dimensions allowing plenty of room for five adults. The third row providing just enough space for two adults is admirable as well but does require a little extra effort for its ingress and egress by way of half-folding and sliding second-row seats for access. Cargo capacity is at a decent 15.8 cubic feet with all seats in place and opens up to a respectable 85.7 cubic feet with the second and third-row seats folded. 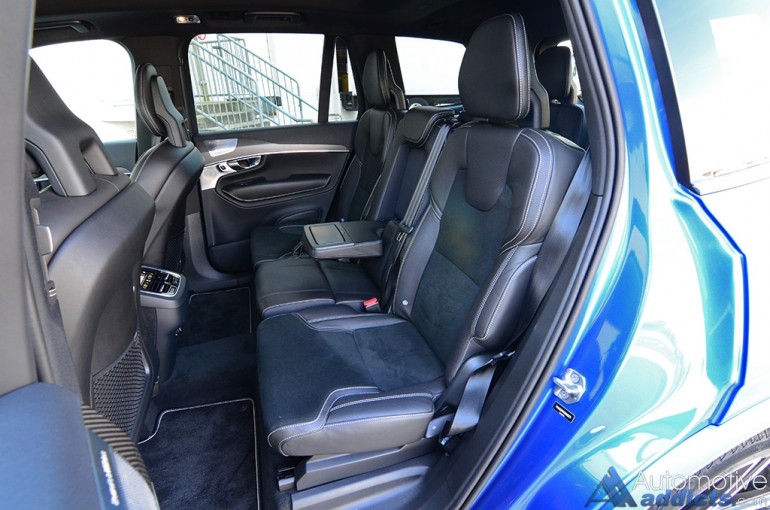 The new and unique dashboard of the XC90 has a simple layout and aesthetic design. Where things get interesting is the infotainment screen and system, one that is probably the most immersive and compounded on the automotive market only falling behind Tesla’s Model S setup. The large landscape-proportioned 9-inch touch screen has several hidden menus and feature sets that are fundamentally confusing at first. Though, with a good 20 to 30 minutes of non-stop exploring, the system envelops some familiarity to that of your iPad or an Android device but with a dash of extra confusion if you’re not the tech savvy type. Most will find the system slightly frustrating as it is the only point of controlling many essential vehicle functions, such as the climate controls, audio settings, Bluetooth phone, and navigation, which are all hidden underneath a home-screen menu set. After a good three days of spending quality time with the XC90 T6 R-Design, the infotainment screen becomes a second-nature control unit that requires several seconds to boot upon vehicle start. Another part of the system’s frustration comes from the collection of fingerprints due to its glossy screen. Essentially, it’s easy to think of the XC90 T6’s infotainment screen as an iPad mini running an OS that was tweaked to no end so it could stuff most vehicle settings and controls into one screen. To its benefit, there is a physical volume knob, defrost buttons, hazard button, previous and advance track buttons, and an electronic glove box release button. Everything else, except the Engine start-stop turn knob, drive mode selector, parking brake, and auto brake, are left to the screen or the 12.3-inch digital instrument screen for the driver. 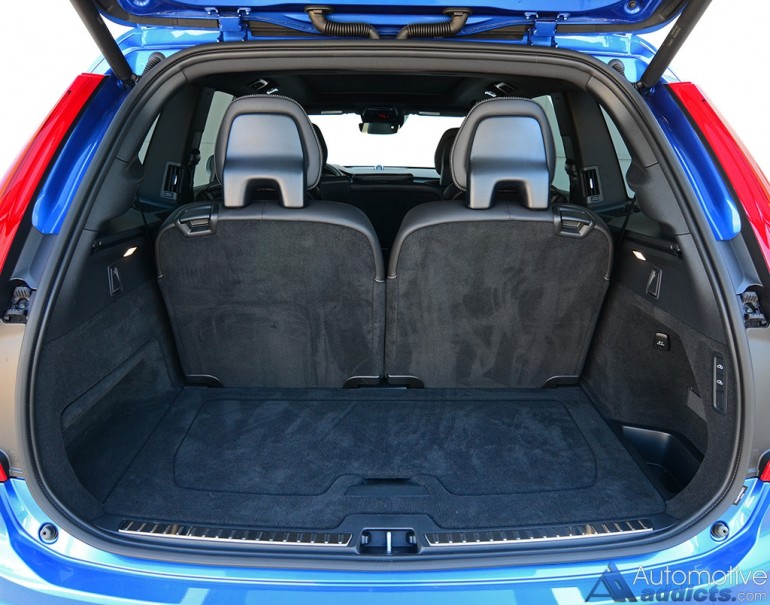 A good collective of parts and forward thinking innovation in mostly all areas of what an up-scale-on the-verge-of-luxury three-row crossover provides, the XC90 is an excellent vehicle and deserving of its prized North American Truck of the Year award. Many highlights put the XC90 T6 AWD R-Design over the edge for its stunning design, a superlative assemblage of active safety features, and an optional Bowers & Wilkins stereo that is the best-sounding system I have experienced in such a vehicle. The as-tested price for my new 2016 Volvo XC90 T6 AWD R-Design test vehicle comes to $67,155 including a $995 destination charge. The new XC90 in its base T5 FWD 5-Passenger Momentum trim starts at just $43,950.

>> Get the best price on the Volvo XC90 from a network of local dealers now. <<