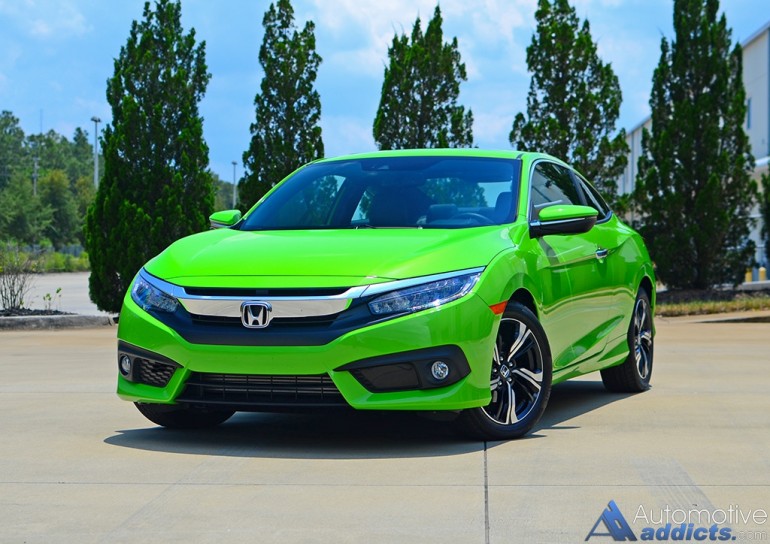 The Honda Civic has been an American staple for a trusted transportation appliance that offers up several variations and exciting trim levels for enthusiasts. In its tenth generation, the Honda Civic has literally grown up to be the best yet in its largest form that some feel as if it has taken the place of the Honda Accord from a couple of generations ago.

With the availability of advanced technology and vehicles that nearly drive themselves, the newly redesigned Honda Civic takes advantage of just that in its latest two-door coupe offering. Moreover, the new Honda Civic Coupe stands out with a bit more sporting flare having only two doors and the availability of exuberant exterior colors like my test vehicle’s Energy Green Pearl paint. 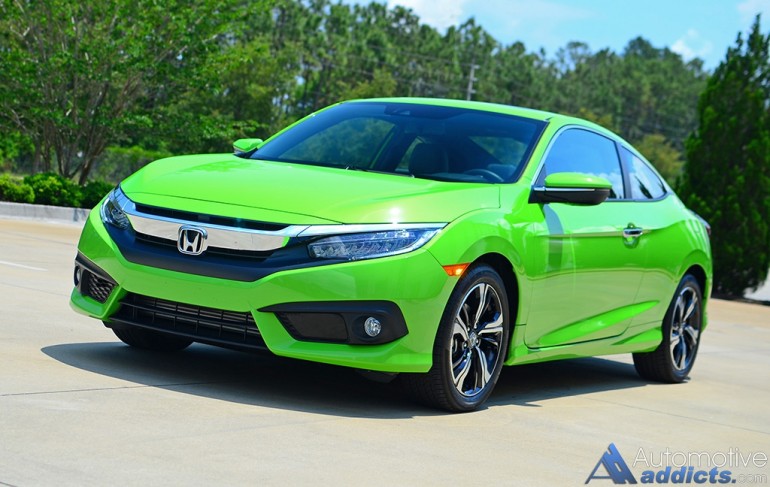 Molded directly from its sedan trim counterpart, the new Honda Civic Coupe takes the award-winning formula and adds a dash of sporty looks by the way of its two fewer doors in a coupe factor. Getting my hands on the new 2016 Honda Civic Coupe in its top-level Touring trim conforms to the best that Honda has to offer for a compact vehicle.

Featuring a 1.5-liter turbocharged direct injection 4-cylinder engine with 174 horsepower at 6,000 rpm and 162 lb-ft of torque at just 1,700 rpm, the new Civic Coupe is an admirable performer for its class. Mated to a CVT (Continuously Variable Transmission) the turbocharged 4-cylinder powers the front wheels for an eager combination once things get moving. The new Honda Civic Coupe Touring, just like its Sedan variation that I reviewed last year, plays to a new trend where best-selling compacts are now merging into a midsized classification, and justifiably so considering the sheer size and interior volume of the new Civic. 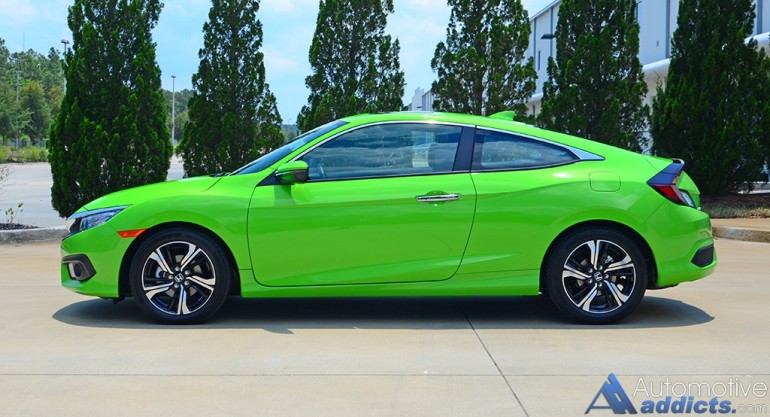 Keeping with Honda’s convention of bundling equipment within each trim level, the new Honda Civic doesn’t have stand-alone options apart from transmission choices. The new Honda Civic Coupe, finally made available alongside the Civic Sedan, touts a wide variety of trim levels starting with the base LX and LX-P trims getting a 2.0-liter 4-cylinder engine with 158 horsepower and 138 lb-ft of torque mated to either a 6-speed manual or optional CVT transmission. Moving on up the chain, the new Honda Civic Coupe has two mid-level EX trims, EX-T and EX-P, which both add the more-powerful but efficient 1.5-liter Turbocharged engine as found in my top-level trimmed Civic Coupe Touring test vehicle. Additionally, the EX trims add a few other desirable features, such as Apple CarPlay/Android Auto, dual-zone automatic and climate control. In the EX-L trim, the Civic Coupe gets leather-trimmed seating, 17-inch alloy wheels, auto-dimming review mirror, and Honda LaneWatch, which adds a camera on the passenger-size review mirror to display a live blind-spot-area image when the right-turn signal is activated. My Civic Coupe Touring trim piles on all available features, which include the highlights of the bright LED headlights w/auto on-off, a 450-watt audio system, GPS navigation system, rain-sensing wipers, and Honda Sensing, which includes a lane keep assist system, adaptive cruise control, collision mitigation braking system, and road departure mitigation. Fundamentally, through the use of an active Honda Sensing system with the adaptive cruise control activated, the Civic Coupe can almost drive itself to follow painted road lines but will judiciously ask you to grab the steering wheel after putting such a notion to the test for a few seconds. I wouldn’t recommend it – I’m only stating the techie fun-factor here. 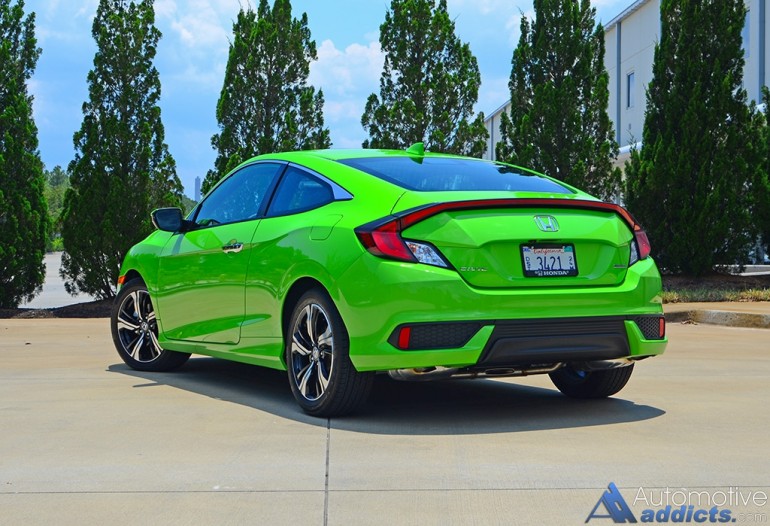 In the area of performance, the new Honda Civic Coupe surprisingly quick on the road exhibiting a zippiness that leaves its direct competition behind. The turbocharged 4-cylinder engine in my Civic Coupe Touring test vehicle is more than adequate for light-hearted enthusiasts. However, the CVT transmission, while among the best in the business of CVTs, leaves a little to be desired for that direct feel. Taking off from a dead stop seems to be somewhat laggy but once things are moving the Civic Coupe Touring performs nicely with the CVT emulating gear shifts through virtual rpm step-downs right at the peak horsepower of the turbo 4-cylinder engine. Letting off of the gas under mid to full throttle tasks gives the vehicle a little unwanted lagging push forward as things slowly wind down. There are no shift paddles, which gets me off of the hook of criticizing Honda for “selectable” virtual gearing. However, there is a Sport shift program mode for the transmission as well as a Low ratio selection. Zero to 60 mph is slightly quicker than the new Civic Sedan in Touring trim with the Coupe only taking 6.8 seconds versus the Sedan’s 7.2 seconds. Some of the performance gain is due to a lighter curb weight in the Coupe over the Sedan by almost 30 pounds. 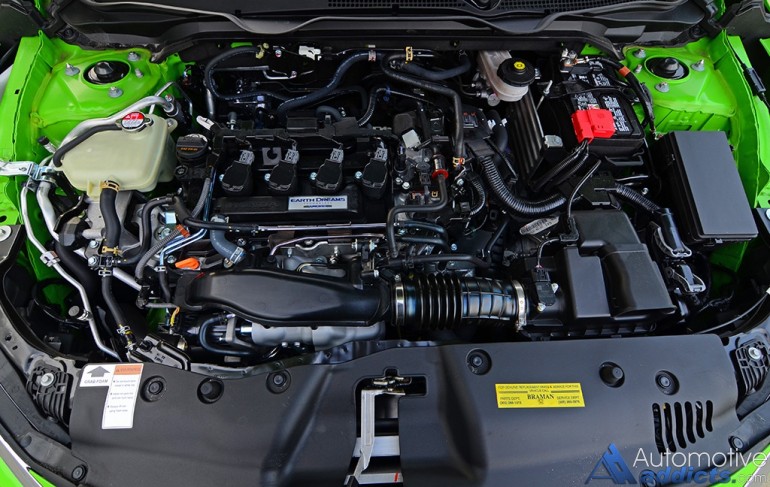 There is an excellent level of inspired confidence in the handling and dynamics of the Civic Coupe’s chassis with an independent rear suspension setup and compliant ride quality that balances sport and comfort perfectly for most. In all, the Honda Civic Coupe demonstrates a chassis that has the perfect foundation for a forthcoming performance variation in the new Civic Si and/or Type R version. In other words, I don’t doubt the new Civic Coupe’s chassis having the proper chops to handle another 100 to 150 horsepower as it sits – I can’t wait!

The interior accommodations are versatile for a coupe in the Civics’ segment. There is a significant amount of adjustability in the height-adjustable front seats allowing short and tall adults to find a comfortable seating position. Out back, the seats have enough room for two average-sized adults, but fitting third passenger in the middle may be a bit cramped and uncomfortable resting on a padded hump for a seat. Otherwise, Honda makes good use of the spacing in the biggest Civic Coupe ever. Cargo capacity, at a respectable 11.9 cubic feet in the trunk, opens up considerably when folding the rear 60/40 split seatbacks. 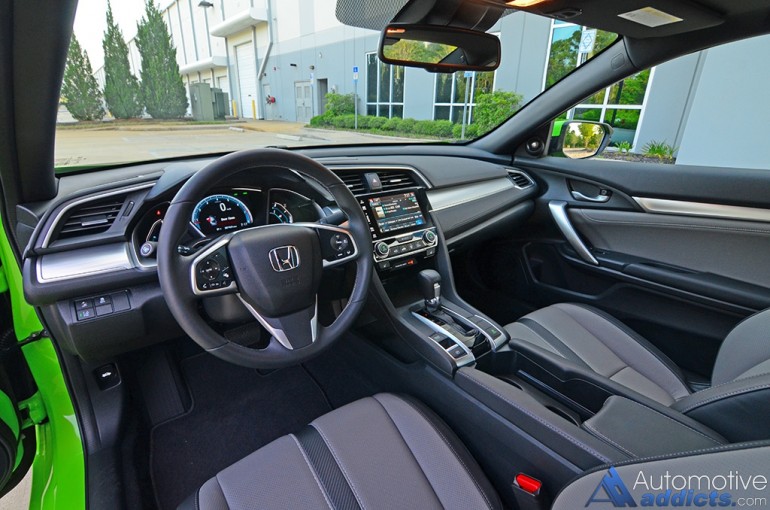 Honda has gone to new lengths to make the new Civic look and feel like a premium vehicle that adds a nice dash of luxury to the equation. The dashboard features several soft-touch surfaces, and the limited painted trim goes a long way to dress up the cabin beside the accented color of the perforated leather seating surfaces. The latest infotainment system combines ease of use with the additional of Apple Car Play and Android Auto integration. Though, in Honda’s latest tradition, a turn volume knob is absent but replaced by a touch-sensitive slider left of the screen that can be controlled on screen once it is prompted. Possibly to make up for the lack of a volume knob is the steering wheel’s touch volume slider and rocker button, which can be disabled if the capacitive touch isn’t desired when handling the beefy leather-wrapped steering wheel. A nifty bridgeway with a lower-level USB connection and pass-through make it convenient for connecting and resting your cell phone in place on a grippy surface. 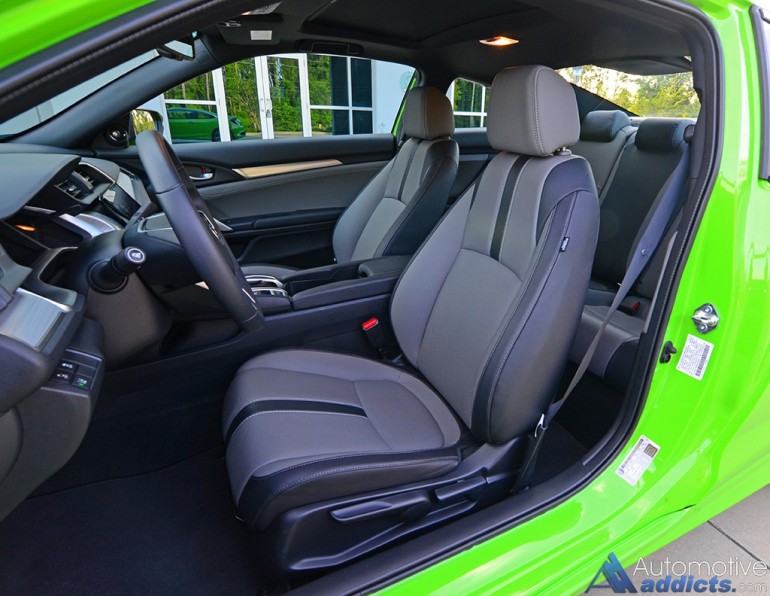 The Honda Civic has always been at the paramount for efficiency, and the new generation in its Coupe form is no different with exceptional EPA estimated consumption numbers. My 2016 Honda Civic Coupe Touring model gets an EPA-estimated 31 mpg city, 41 mpg highway, and 35 mpg combined. Those figures are easily attainable, and you may get even better mileage on the highway as I did landing at 42.6 mpg average on a trip I took to a few neighboring cities. Around town, I met the 31 mpg city estimate with 31.2 mpg and about 34 mpg in slow stop-and-go rush-hour traffic for about 14 miles. 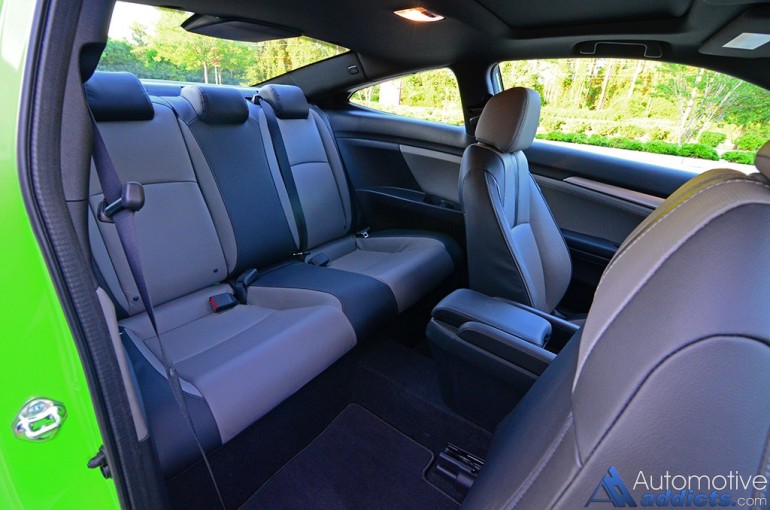 Conforming to its tradition in being an economical vehicle, the new 2016 Honda Civic Coupe starts at a reasonable price, $19,885 for the base LX-P trim with 158-horsepower 2.0-liter 4-cylinder engine mated to a 6-speed manual transmission. At the top end of things, my Honda Civic Coupe Touring test vehicle with the more powerful turbocharged engine and CVT transmission comes to an as-tested price of $26,960 including a destination charge of $835.