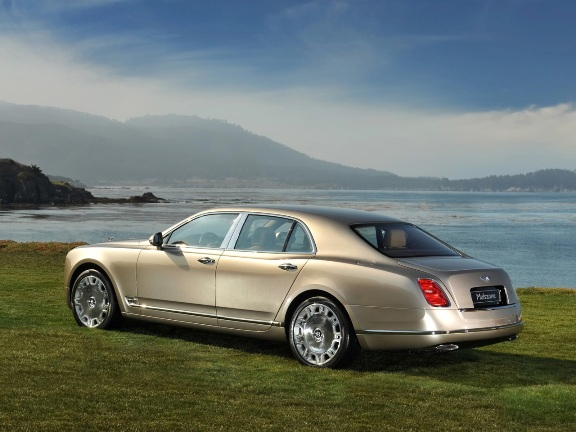 As if Bentley needed a new flagship vehicle to be placed in the lineup but as no sooner than this thought entered and exited my mind, a new grand tourer called the Mulsanne makes its worldwide debut at this year’s Pebble Beach Concours d’Elegance in Monterey, California.

The new Bentley Mulsanne is a big car, stretching about 11 inches longer than the Flying Spur and inspired by company founder W.O. Bentleys ultimate achievement in 1930, the 8-litre. The Mulsanne sits very low and has a wide stance giving it a serious presence as it will stand for the pinnacle of British luxury motoring. This is a real luxury grand tourer.

With a slightly new look up front, the Mulsanne will not be mistaken for anything other than a Bentley. The new headlight arrangement is reminiscent of the 8-liter Bentley. Back then there was not a Rolls-Royce influence in any designs. The interior of the Bentley Mulsanne is very different from that of the Arnage. It incorporates more chrome accents and modernized controls but still surrounded by wood trim.

Look for the Bentley Mulsanne to be further revealed along with the engine specs and specifications at the Frankfurt Motor Show this year.