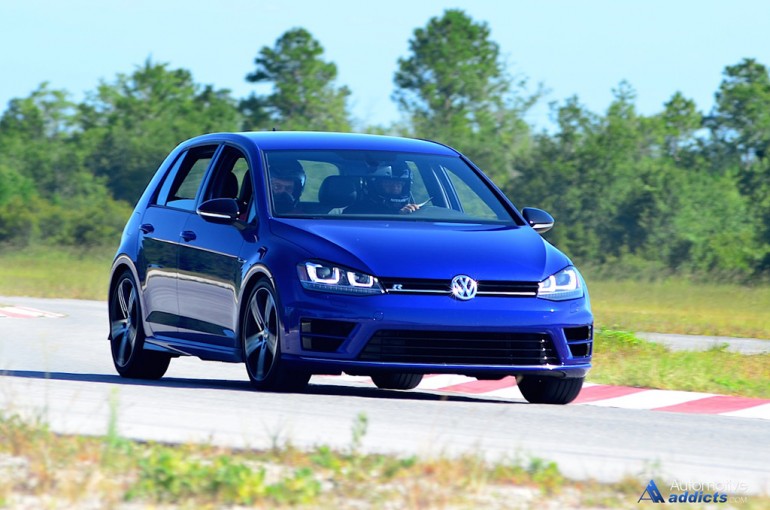 Volkswagen’s long-famed Golf has been a big staple for the brand in offering a consistent and versatile vehicle that appealed to a wide spectrum of people, including hard-core enthusiasts when it comes to the new Golf R. In the latest iteration, its seventh (Mk7) generation, the Volkswagen Golf R flips the coin of recent brand woes to leave behind the thought of Diesel scandals and places you in the driver’s seat of positive forward momentum, in a literal sense.

>> Get the best price on the Volkswagen Golf R from a network of local dealers now. << 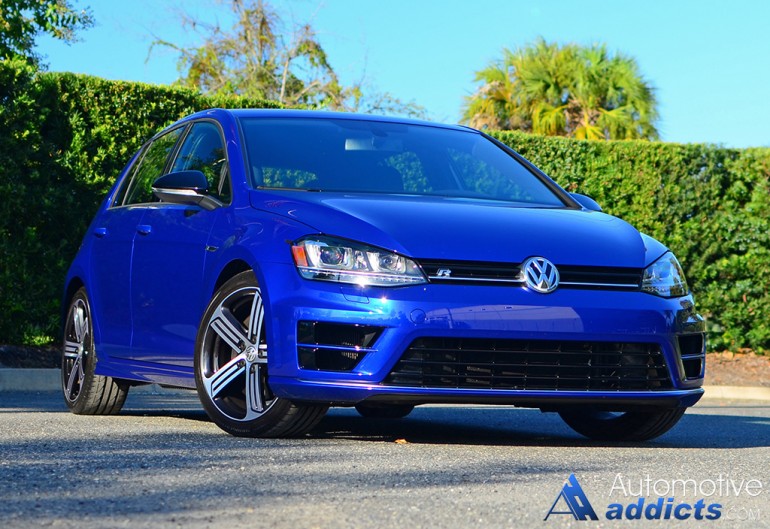 The 2016 Volkswagen Golf R now gets a 6-speed manual transmission as standard equipment along with an updated infotainment system and connectivity. Otherwise, the Golf R remains mostly unchanged from its redesign as a 2015 model.

Fundamentally, the Golf R is the quintessential pocket rocket-edition of the GTI that we have adorned since bringing that coveted R badge to our shores in 2012. Riding off of the basic principles of the performance-injected R32 of days past, the new Golf R improves upon those expected traits and brings us what we all want, an all-wheel-drive hot hatchback with nearly 300 horsepower and a standard 6-speed manual or optional 6-speed dual-clutch transmission. 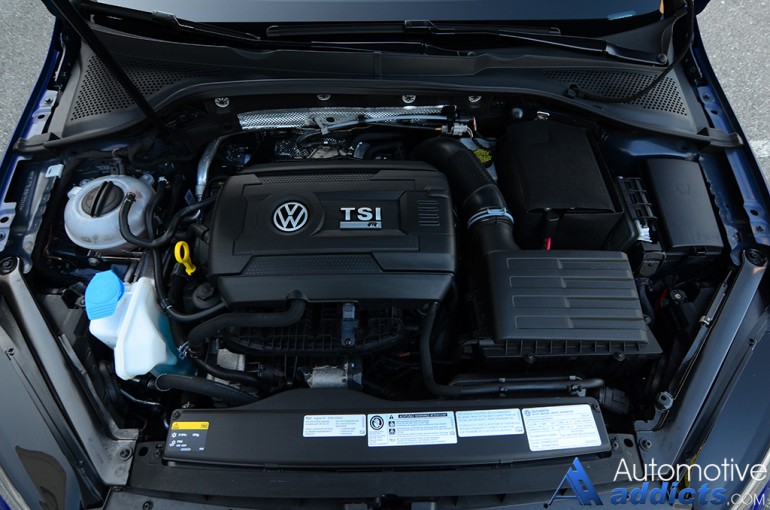 The collective of the Golf R’s parts starts with its 2.0-liter turbocharged engine that produces a healthy 292 horsepower at 5,400 rpm and 280 lb-ft of torque at 1,800 rpm. The engine’s low-rpm-surging power is part of the enjoyment in the Golf R riding on top of its 18-inch wheels on my base trimmed Golf R test vehicle wrapped with pavement clawing Bridgestone Potenza tires. Power comes on early and strong. Use of the launch control by disabling traction and electronic stability control, selecting Race mode, holding the brake, stomp the gas pedal to the floor, and release the brake when you’re ready, the new Golf R will make it to 60 mph in about 4.5 seconds. No doubt that the Golf R is poised and ready for weekend track sessions, which is exactly what I did during my time with Wolfsburg’s latest hot hatchback. 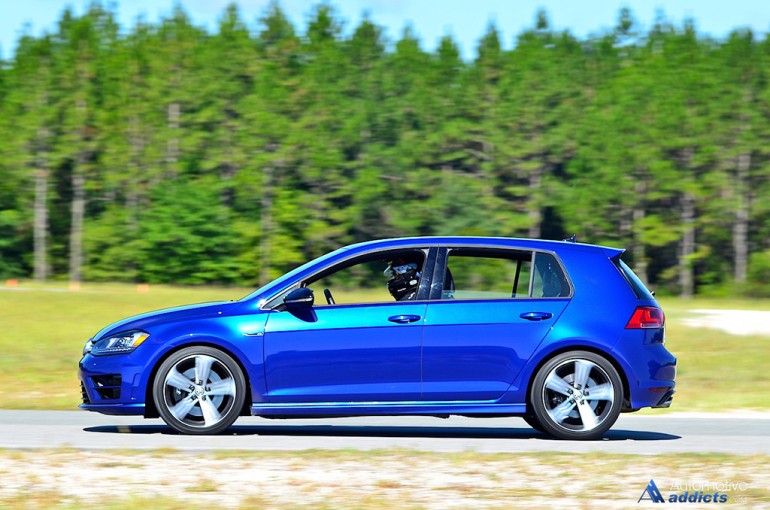 The track session with my Golf R test vehicle started and ended with a big smile on my face as it proved to conduct itself much like it was hooked on rails. The Haldex 4Motion all-wheel-drive system was nearly flawless in transmitting power where it was needed, up to 50% to the rear at times or decoupling the rear wheels altogether when cruising. There was only a hint of understeer where the Golf R would default into a safe push when entering into a long winding corner a bit too hot. Never did the rear come out with oversteer. In fact, I tried to push the tail out and it wouldn’t budge only to reward me with a soft push of the front by way of a nudging steering feel through the electric-assisted steering rack. The torque digs in and sets the Golf R in motion with hardly any lag out of low rpm starts. The tires did a decent job to keep screeching sound effects at a minimum while the big 13.4-inch front and 12.4-inch rear brake disk rotors and oversized single-piston calipers did quite well to shave off speed without any noticeable fade, even when repeatedly taxed with 100 mph down to a 40 mph turns. 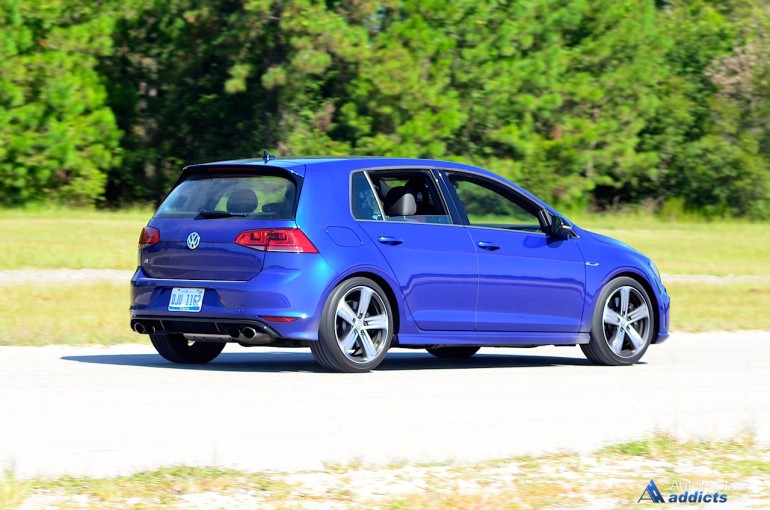 The suspension system was part of the Golf R’s formula that embellished its decent handling to accomplish 0.95g on the skidpad yet remain civilized on public roads. The ride quality is good and conducts itself in a balanced fashion without any upset from road imperfections or raised rumble strips on the track. In all, the Golf R has one of the best suspension setups in its class to keep its composure when pushed and provide a supple quality when commuting to work. 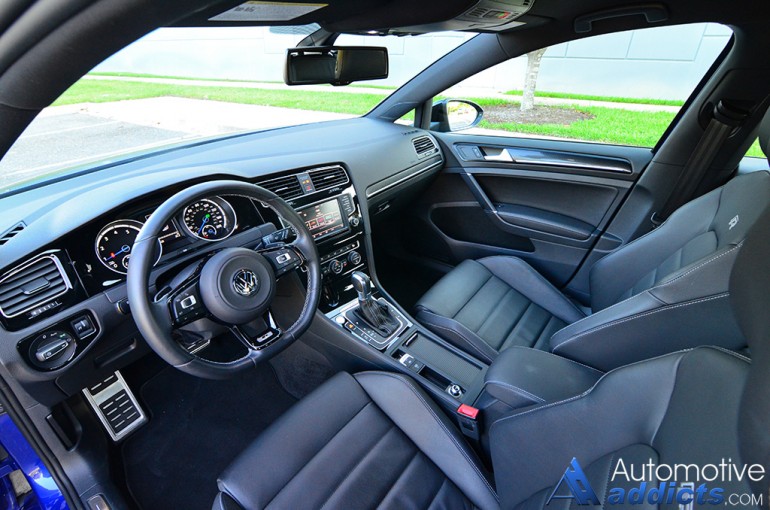 At the full spectrum of its performance, the Golf R feels as if it can hold its own and some when placed against the new 350-horsepower Focus RS despite the R’s horsepower disadvantage. Much of the makeup work performed by the Golf R is found in its optional snappy-quick-shifting 6-speed DSG transmission found on my test vehicle, which is also a benefit over the manual-only Subaru WRX STi. Many who have experienced the Golf R and relayed their test results will also agree that the dual-clutch transmission is worth a go if you desire the ultimate performance, where a dash to 60 mph is quicker by nearly 0.7 seconds versus the 6-speed manual gearbox. Undeniably, I was impressed with the performance, ease of drivability, and adaptability to public roads of the Golf R. It’s certainly no one-trick hatchback. 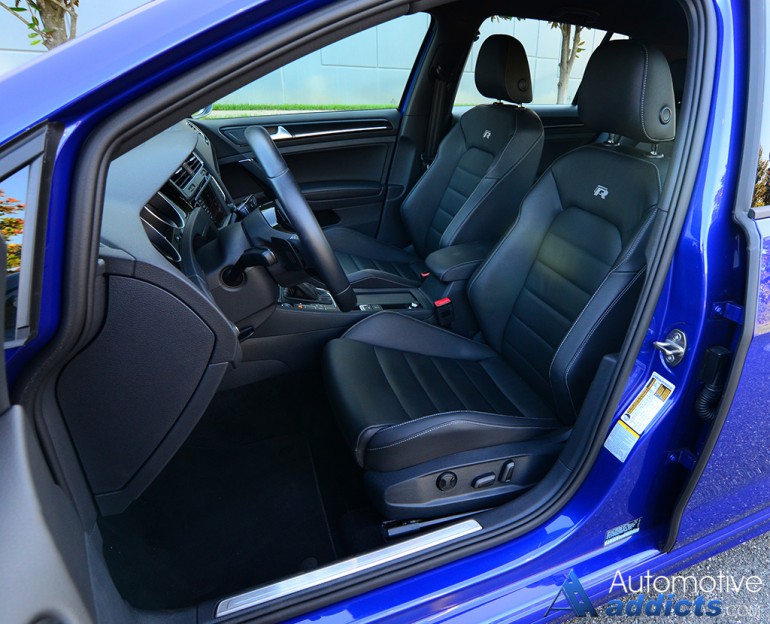 The civility of the Golf R excels in ways I thought it wouldn’t considering all that goes into under-the-skin engineering in order to affix those R badges. On the front of being economical outside of its lofty price, the Golf R returned remarkable fuel consumption numbers. The EPA estimates of 23 mpg city and 30 mpg are great, but I was able to beat those numbers to get nearly 32 mpg on the highway and averaged about 25 mpg when mixing in 25% of a trip in light to moderate traffic. 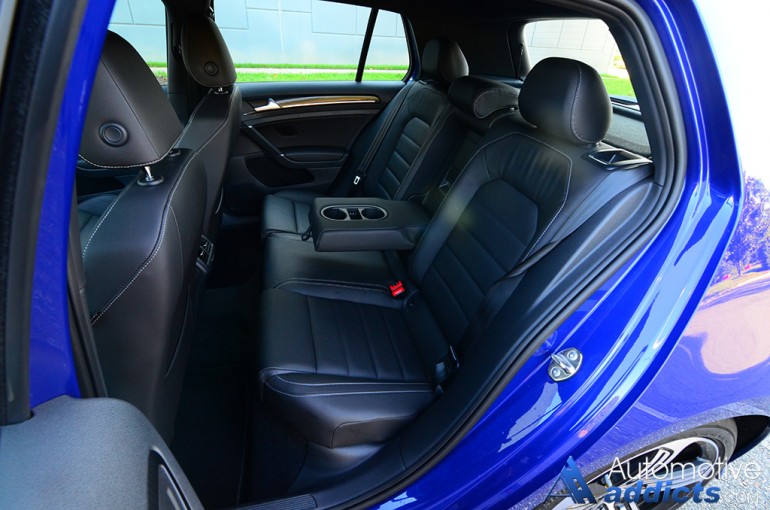 There isn’t much required to extract the practicality out of the Golf R as it resides on the principles that have long been adorned by many, including enthusiasts, which you find in the normal Golf and GTI. The interior continues to be a class act with a soft touch dashboard, upscale-looking materials, dual-zone climate control, backup camera, 8-way power driver’s seat, rain-sensing wipers, Bi-Xenon Adaptive headlights, LED daytime running lights, and nicely bolstered R-emblem-stitched front heated leather seats. To immediately draw come comparisons to its direct competition, the Golf R’s interior is slightly more refined than that of the new Ford Focus RS. Moreover, the Golf R’s front seats are not as aggressive in their bolstering when compared to the Focus RS’ Recaros. The 60-40-split folding seatbacks open up the hatch to just over 52 cubic feet of space. 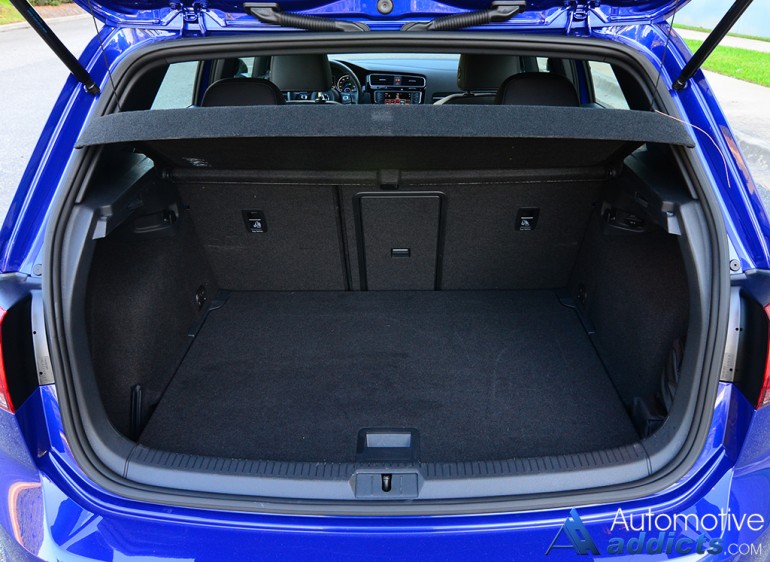 The civility of the Golf R makes it more of a multipurpose vehicle where it serves those duties well without any apparent faults. Volkswagen finally gets it right with the proper connectivity and availability of Apple Car Play and Android Auto in the Golf R. Moreover, for the 2016 model year, there is a Driver Assistance Package that adds items like adaptive cruise control, and a bevy of other options, such as dynamic chassis control w/adjustable dampers, GPS navigation system, 19-inch wheels, and a Fender Premium Audio System. There are several standard features on top of its remarkable all-wheel-drive performance to potentially justify it’s $12,000 premium over its lesser GTI sibling. Though, like me, many are hard pressed to respect the price point of my base-trimmed Volkswagen Golf R having an as-tested admission of $37,570 including a $820 destination charge. I get it, that is, after driving the new Ford Focus R and now the Golf R on the road and track. Sign me up for either one, though, the Golf R could win me over if it had a little more soul with a louder exhaust note instead of piped-in sound through an actuator, the ability to bias additional power to the rear wheels, and a cloth seat option. Of course, I would naturally settle for the standard manual transmission and save $1,100. Bravo VW!

>> Get the best price on the Volkswagen Golf R from a network of local dealers now. <<