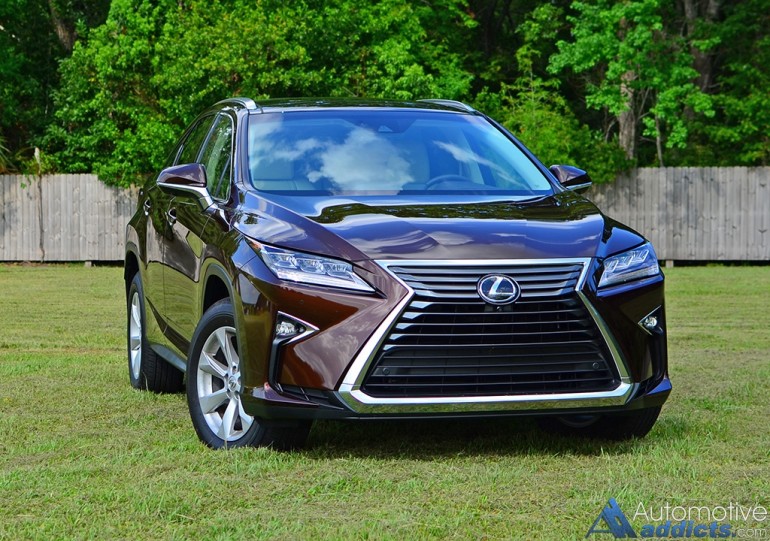 The Lexus RX definitively introduced the crossover segment to the luxury world, and its latest iteration, newly designed for the 2016 model year, it proudly carries the torch to captivate the masses with a bit more spark.

The new styling in the Lexus RX is bold and pops into focus for those who were accustomed to the somewhat vanilla flavor that such a vehicle has offered in its nearly 18 years of existence. With its all-new exterior and re-worked interior, the Lexus RX 350 reworks its 3.5-liter V6 engine to now sport 295 horsepower and 267 lb-ft of torque. Power is sent through an 8-speed automatic transmission for all trims except the RX 450h hybrid, which gets its own continuously variable transmission (CVT). The Lexus RX 350 continues to be offered in both a standard front-wheel-drive configuration with the option of adding a sophisticated all-wheel-drive system. 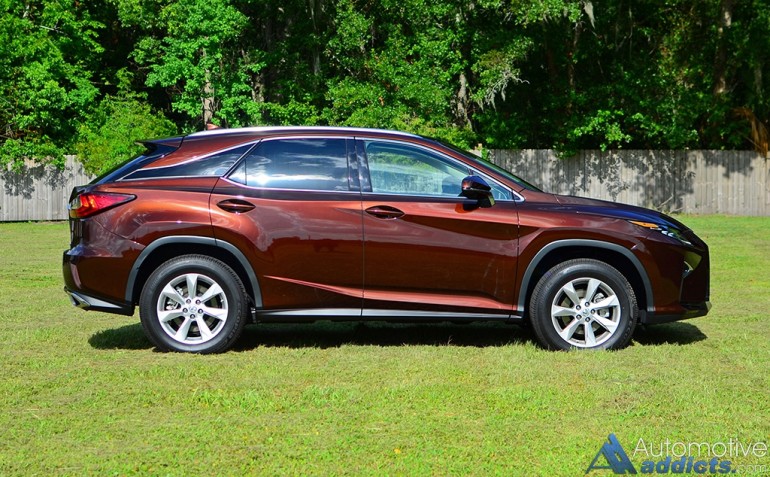 Driving the new Lexus RX 350 feels as if you’re piloting a sewing machine, one that’s powerful enough to reach 60 mph in about 7.4 seconds while comfortably transporting up to 5 occupants and enough cargo to fill a welcomed 56.3 cubic feet out back behind the rear seats. The nature of the RX 350 remains to be soft with a straightforward character that’s mostly predictable. The steering is nicely weighted in the Drive Mode Select’s Sport setting while the RX 350 pushes into abundant amounts of understeer if you ever feel desired to push it to the limits. Finding those limits the RX 350’s mostly composed body seems to give you several blunt reminders from the stability and traction control before you commit to doing something stupid, whether that be entering into an exit ramp too fast or attempting to avoid an object in the road. Power is consistent and the performance is mostly tuned at the end of being a safe vehicle over one that exceedingly performs to keep up with entry-level sports cars, which is part of the reason the Lexus RX 350 is a hot seller for its segment among those who could care less about rocketing past everything on the road. 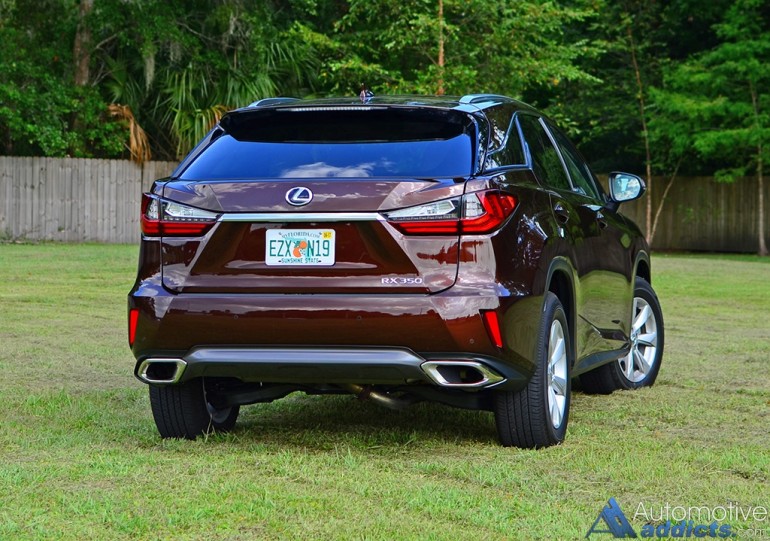 In addition to its cushy ride quality, the RX 350 has exceptional versatility, respectable amounts of cargo space, and an overall ease of use. The new 2016 Lexus RX 350 is one of the best road isolators in the luxury crossover segment, which an be a good or bad thing. For the most part, it all comes down to what you are looking for in a new 5-passenger luxury SUV that you may also find in your neighbor’s driveway. I’m willing to bet that most don’t mind the isolation and eerily quiet cabin of the new RX 350, after all, American suburbs welcome it. 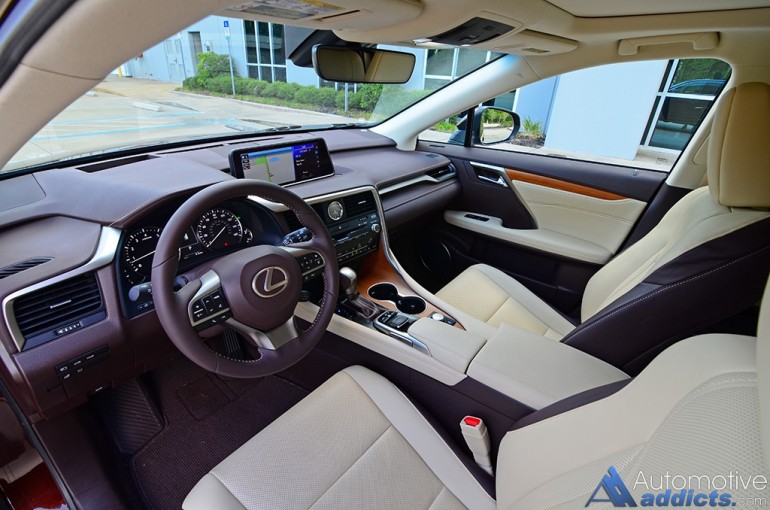 Fuel consumption remains to be respectable for the Lexus RX 350. My fuel mileage didn’t deviate far from the EPA estimates of 20 mpg city and 28 mpg highway, which are mostly consistent. Moreover, the ability to burn regular fuel is an added bonus to saving a bit at the pump, thanks to Lexus’ engineering of their latest 3.5-liter V6 engine with variable valve timing.

The interior of the Lexus RX 350 has been reworked with most controls placed in their expected positions. Though, probably the most disappointing parts of the RX 350’s interior is the Lexus joystick-like infotainment interface, which now controls a rather large 12.3-inch display that protrudes out of the dashboard like an iPad on a vertical stand does at your dinner table. 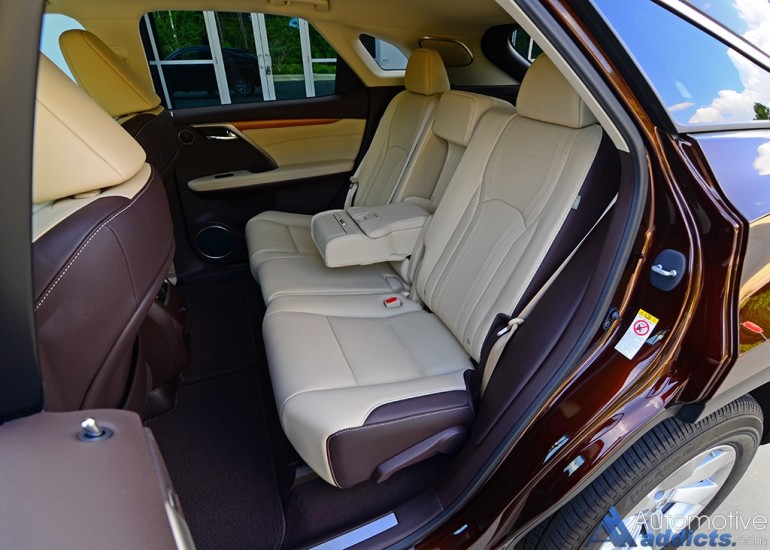 The seating in the Lexus RX 350 has a mid-level comfort to them without any complaints on long trips. Opting for the F-Sport package adds sportier seats up front with more bolstering but fails to add any performance to the overall formula despite a sport-tuned suspension system that has adaptive dampers. My nearly-loaded RX 350 test vehicle has many desirable options, including adaptive cruise control, a clever 360-degree camera system, heads-up display, and a bevy of active safety futures (blind spot monitor, forward collision warning, forward emergency braking, lane departure warning, lane keep assist). One thing to note on my test vehicle was the absence of heated or ventilated seats, which was part of Lexus’ poor equipment lists through the option packages. Least to say, the option packages need a little re-working on their redundancy and lack of essentials for some of the package selections where only certain packages offer heated and ventilated seats. What good is my test vehicle’s heated steering wheel if you have no heated seats to go with it? C’mon Lexus! 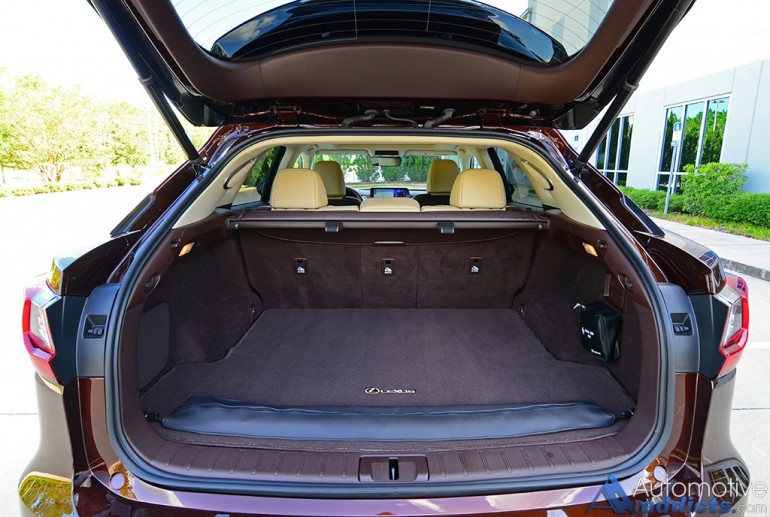 There are many evident reasons as to why the Lexus RX remains to be a highly sought-after vehicle for its segment. It’s one of the best plug-and-play luxury crossovers on the market with a long track record of reliability and impeccable fit and finish to boot. I can’t find much fault in the new 2016 Lexus RX 350, even with its bold new styling that can be a bit polarizing for some at first. Nevertheless, America is inclined to adopt “new” things, and the RX offers just that, something original and fresh out of the box with a long list of available amenities and active safety features.

The new 2016 Lexus RX 350 starts at $42,000 in its base front-wheel-drive configuration. Moving up to my all-wheel-drive nearly loaded test vehicle you can expect to pay the as-tested price of $56,000, which includes an $885 destination charge.