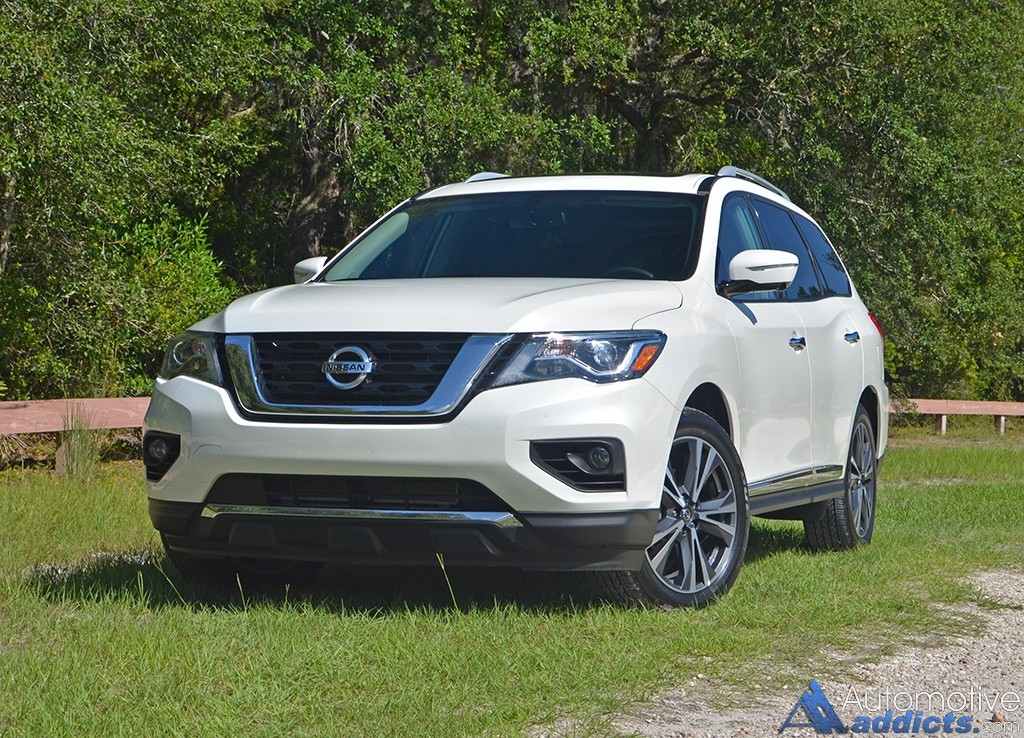 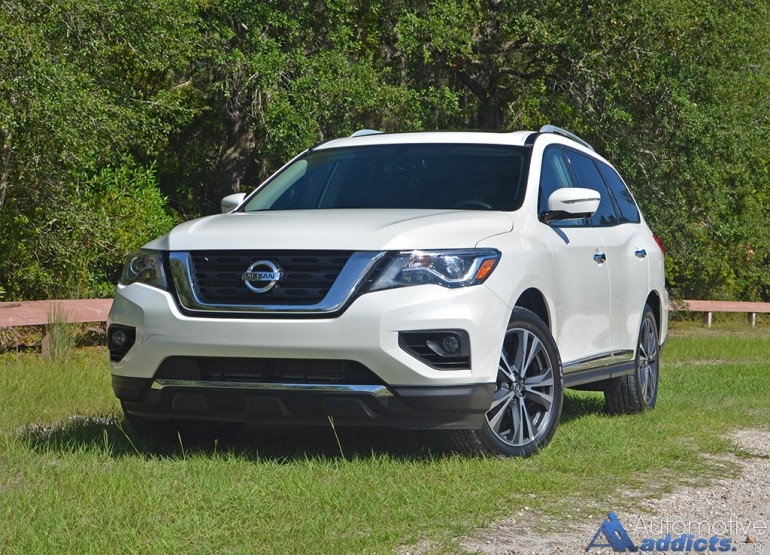 The Nissan Pathfinder has always been a consistent mark for the Nissan brand when it comes to a reliable, proven, and somewhat off-road capable sports utility vehicle with a respectable amount of versatility. Conforming to the modern day mold, Nissan has afforded to place the latest Pathfinder far into the crossover segment with several softened attributes and injects a taste off-road prowess with an available intuitive all-wheel-drive system as found in my recent test vehicle. 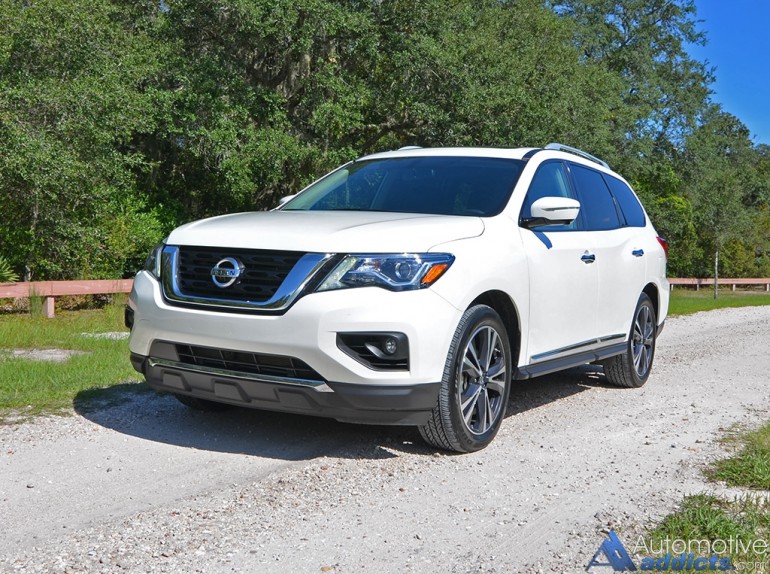 Embarking on a week-long journey I get to experience the 2017 Nissan Pathfinder in its top-level Platinum 4WD trim. For the 2017 model year, the Nissan Pathfinder gets several updates, including more power from its 3.5-liter V6 engine, great towing capacity, revised steering and suspension, a slightly larger infotainment touch screen, and a refreshed front and rear end with LED daytime running lights up front. 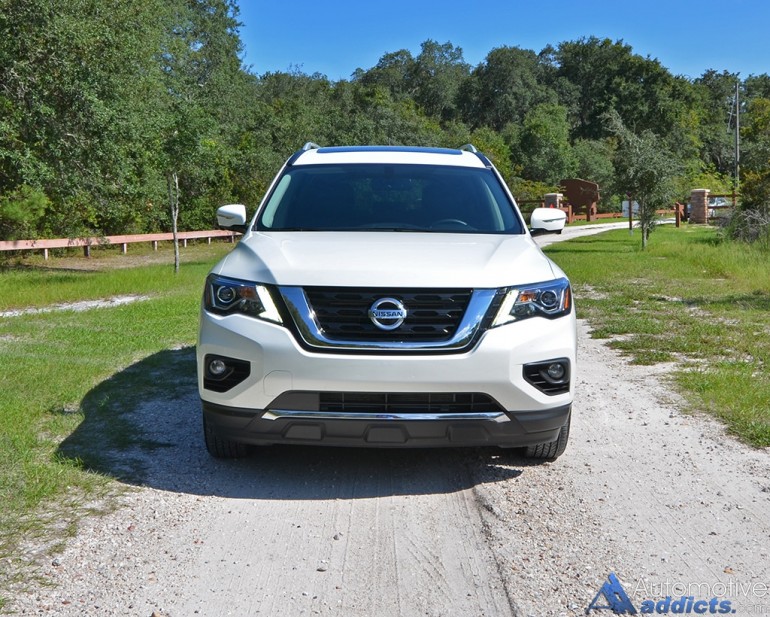 The 2017 Nissan Pathfinder’s latest 3.5-liter V6 engine continues to be mated to a CVT (Continuously Variable Transmission) to power the front wheels or all four wheels via a 4×4-I system as found in my Platinum 4WD trimmed test vehicle. The current generation Pathfinder, introduced in its current fourth-generation crossover and unibody construction as a 2012 model year, continues to define its “path” right beside a growing and thriving crossover segment.

>> Get the best price on the Nissan Pathfinder from a network of local dealers now. <<

With crossover vehicles making record sales through this year, the Nissan Pathfinder has found itself to continue to impress with contemporary design and subtle design and content updates that keep consumers coming back. Long gone is the Nissan Pathfinder that we knew to be one of the most reliable box-shaped utility vehicles from the shores of Japan to reach our side of the pond. Now, making due with additional power, 284 horsepower and 259 lb-ft of torque from a 3.5-liter V6 engine, the Pathfinder keeps pace with the competition. 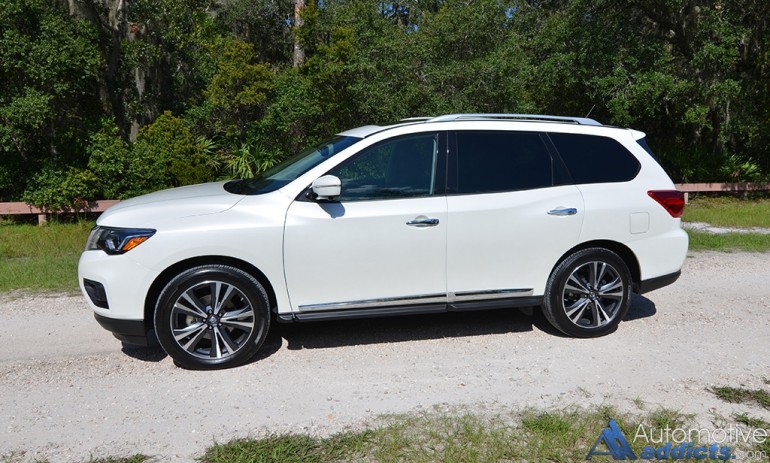 The overall performance of the Nissan Pathfinder hardly stands out in a crowd just as its conventional exterior design even with the Platinum 4WD trim’s 20-inch wheels. Where the 2017 Pathfinder does shine in making road-paths “found,” is a proven drivetrain in its beefy V6 engine and enthusiast-sapping CVT transmission that’s tuned more to appease the eco-friendly community. The latest CVT isn’t anything thrilling by any stretch of the imagination. However, it performs well and allows the V6 engine to come to life through its power band with virtual shift points that somewhat emulate a conventional automatic transmission that has physical gears at mid to full throttle inputs. Though, the Pathfinder’s CVT, fundamentally what you find in the Nissan Murano and other platform-sharing vehicles under the brand’s umbrella, reacts fast to your throttle inputs except when performing low-speed rolling starts. The CVT somewhat falters when immediate power is demanded while rolling around 10 to 15 mph. Still, the smooth power delivery and efficiency is where the Pathfinder gets its markings. The other downside of the Pathfinder’s performance lies within a somewhat numb steering feel despite updates, an overabundance of understeer when pushed to its limits, and a droning sound upon middle to full throttle inputs with the CVT allowing the robust V6 engine to hang at high rpms. 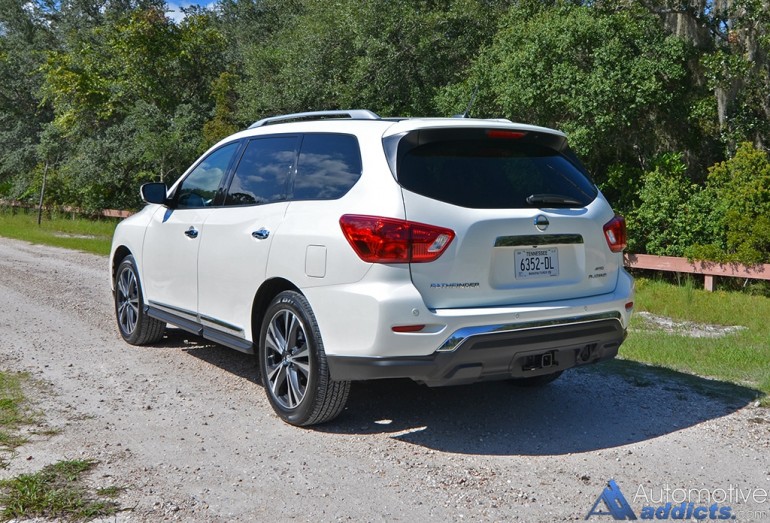 The Nissan Pathfinder’s fuel efficiency, unchanged on paper from last year, appears to be somewhat better in real world conditions especially considering my test vehicle being all-wheel-drive. The 2017 Nissan Pathfinder Platinum 4WD gets a respectable EPA-estimated 19 mpg city, 26 mpg highway, and 21 mpg combined. While those numbers may not be as huge as most sedans, it is a decent and easily attainable number for a big three-row crossover that can seat 7 passengers comfortably and tow up to 6,000 pounds. 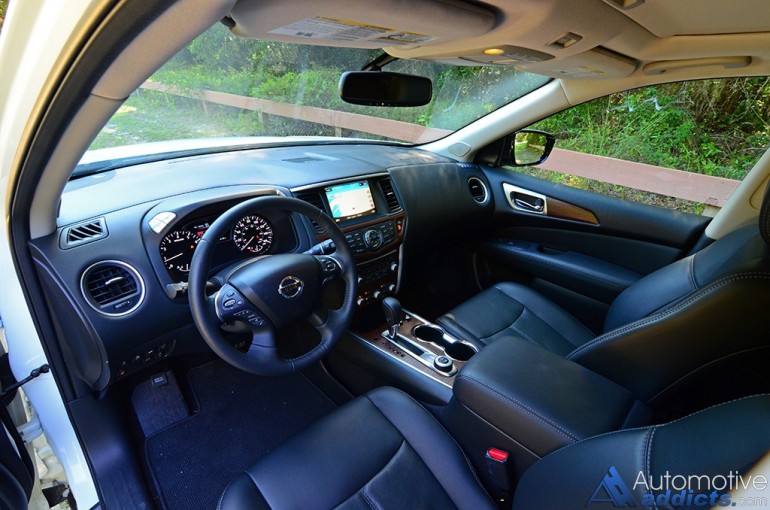 The cabin of the latest Nissan Pathfinder in its top-tier trim level, The Platinum 4WD, visually appears to be inviting. Though, the visual appeal quickly departs your mind once any of the abundant plastic surfaces are touched. To put it lightly, there is just a bit too much hard plastic to give the Pathfinder any praise for its interior’s luxury appeal. Though, the door trim upper surfaces are all soft-touch with wood trim that fails to match the center dashboard’s wood trim touch-texture. The dashboard encompassed in hard plastic is underwhelming, almost to the point of thinking that the Pathfinder’s not-so-distant Infiniti QX60 luxury crossover relative received all of the good stuff leaving the Pathfinder with the leftovers. Nevertheless, the interior of the Pathfinder is somewhat forgivable with its abundance of plastics due to the spacious accommodations that permit easy entry and exit from any position.

The seating of the 2017 Nissan Pathfinder, a highly praised aspect when its current generation platform was introduced many years ago, remains to be one of the Pathfinder’s highlights. Up front, the heated and ventilated Zero Gravity leather seats are inspired by NASA design that nearly eliminates long-haul fatigue. The second-row seats, with perforated heated leather surfaces, have ample adjustability to accommodate adults who need extra legroom or a decent angle recline. The third-row seats, accommodating two adults, have just enough shoulder room and leg room provided the middle-row is adjusted forward a couple inches by way of its manual sliding adjustment. Access to the third-row is also a remarkable part of the Pathfinder’s design incorporating 45-degree-back-folding seats that are simple to operate and allow baby car seats to remain in place upon moving then for access to the third-row seats. The unfortunate part of the three-row setup is that cargo capacity is a bit shorter than some of the Pathfinder’s direct competition when all seats are in place with only 16 cubic feet of space. Cargo space opens up to almost 80 cubic feet with second and third-row seats folded. 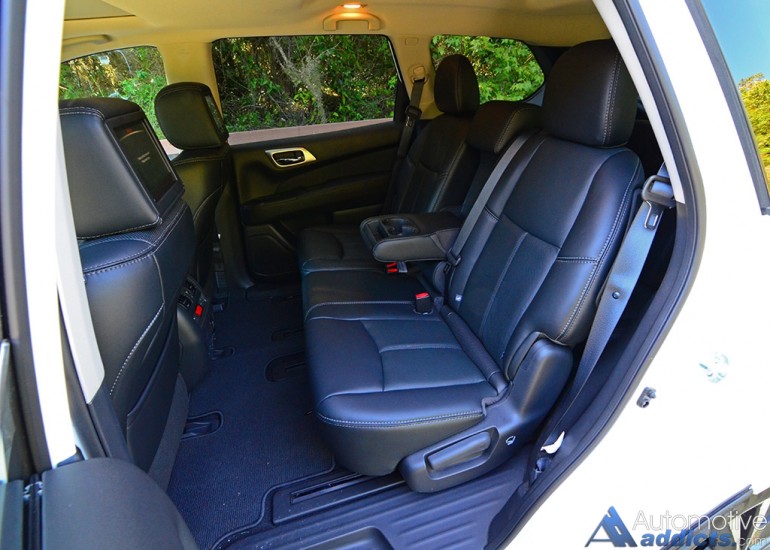 Completing the Nissan Pathfinder’s versatile and accommodating cabin are second-row climate controls, a panoramic sunroof with a rear-power-sunshade, a cargo area accessed by a motion-activated power rear liftgate, a remote vehicle start system, and an optional family DVD entertainment system package with two headrest-mounted screens and a pair of wireless headsets. It’s possible that the abundance of dashboard hard plastics can be overlooked by the Pathfinder’s inviting seating accommodations and my loaded-up test vehicle’s entertainment system package. 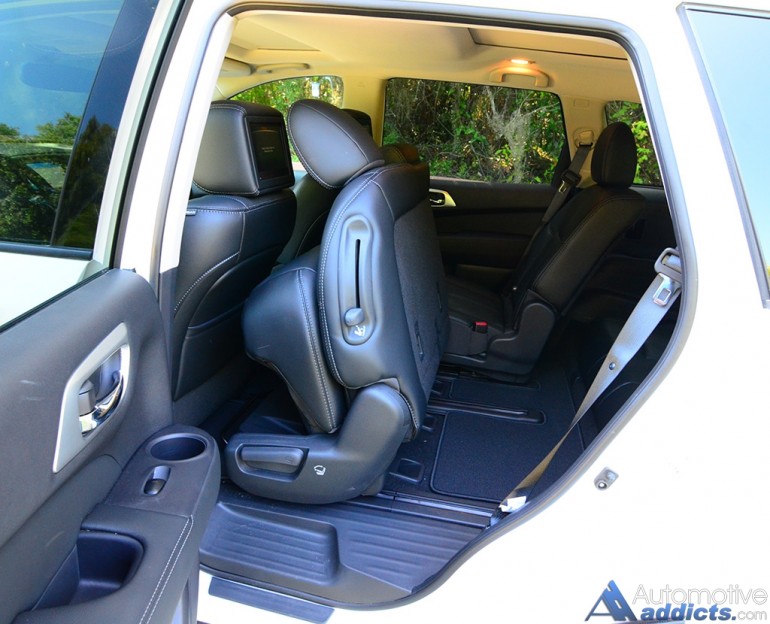 The latest iteration of Nissan’s infotainment unit used in the 2017 Pathfinder now uses an 8-inch touch screen. The system combines the intricacies from the brand’s user-friendly setup that has received rave reviews. Though, the system retains a rather basic graphic look of its GPS navigation system but now adds the ability to pinch, zoom, and drag across the screen much like you would on smartphone devices. 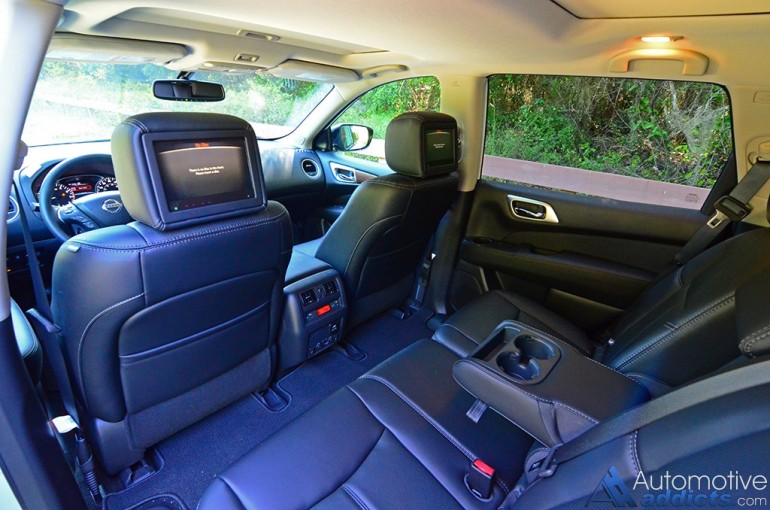 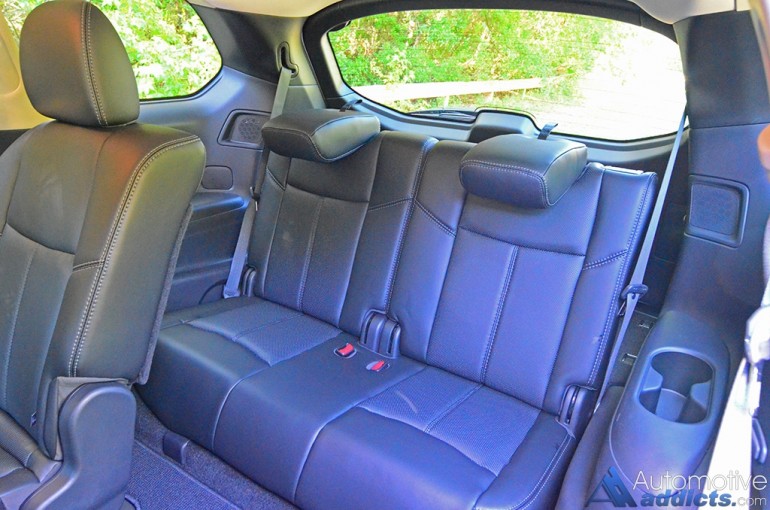 The 2017 Nissan Pathfinder remains to keep a good value prospect for those in the market for a well-thought and relatively efficient V6-powered three-row crossover starting at a price of $29,990 before any fees for the base Pathfinder S. My top-trim-level 2017 Nissan Pathfinder Platinum 4WD tops out at an as-tested price of about $45,090 including a $900 destination charge, which is a respectable price point for an exceptionally versatile and accommodating three-row 7-passenger crossover.

>> Get the best price on the Nissan Pathfinder from a network of local dealers now. <<